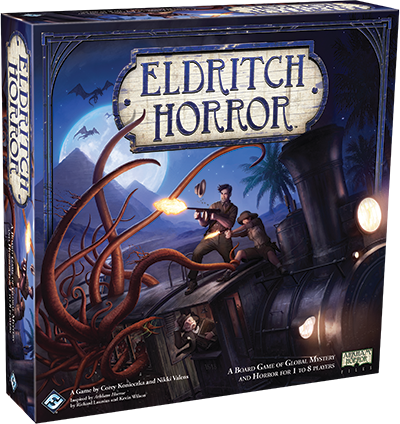 More Cthulhu.
Limited card pool in base game.
Can run looong.
Set up & tear down can be lengthy.

This gets everything right, it streamlines the original Arkham Horror into portal filled evenings entertainment of eldritch terror. You could argue that it misses much of the subtlety of Lovecrafts original works, but as a globe spanning epic of world ending fun you can do a lot worse.
And you can even play it on your own if you want.

Confession time folks. I have not played Arkham Horror, Fantasy Flights sprawling ode to H P Lovecraft and his twisted tales of doomed lost souls. I came close quite a few times and its sat in my Amazon wishlist for as long as it takes to play a game of Twilight Imperium 3, but I never quite convinced myself to push that button. There is a couple of reasons for this, the innumerable amounts of expansions for the game being the biggest, I’m not saying expansions are a bad thing, just the opposite and in fact we will touch on the subject later in this review, but looking at the sheer amount of extra stuff for the game my wallet gave a little cry.

Even the base gave is a table hog (I’m looking you Firefly as well) and then I wasn’t entirely convinced my group would embrace it, Arkham does look a daunting task at first glance. But luckily for me FFG solved my quandary by announcing Eldritch Horror, which looked to be and is for all intents an Arkham Horror reboot, a great place to leap in at the ground floor.

Eldritch like Arkham is loosely based on the works of HP Lovecraft, it has cherry picked from his multitudes of elder gods and horrid things crawling at the edges of our sanity and wrestled them into a big box of dark intent. Set during the 1900’s this game see’s you take the role of one of 12 plucky but ultimately doomed adventurers, you are tasked with the unenviable job of travelling the globe desperately trying to shut down portals that are tearing through the fabric of our reality and spewing fourth icky orrible beasties. All the while the big bad Cthulu or another of his type is waiting in the cross dimensional wings to bring about the end of the world. So no pressure then.

Eldritch is at its most basic a great big horror story in a box, it will chart the short and terrifying journey of your character and their inevitable death at the tentacles of some nameless horror, recounting an evening of Eldritch will probably gain you a space on a packed train and some funny looks. As with all FFG titles this comes with a heap of quality components and tokens, and cards and more tokens. In this set there are four separate ancient ones each coming with their own tailored decks, so whatever bad guy you pick there are cards in here to add a nice thematic touch to proceedings rather then a ton of generic story fillers. 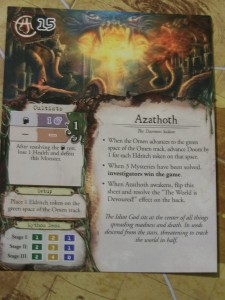 The actual game is pretty straightforward helped hugely by a very well put together rule book with an additional reference manual to help with some the games trickier bits. I doth my cap to FFG for their efforts here and all you other publishers out there need to take a look at this thing because they get it right. 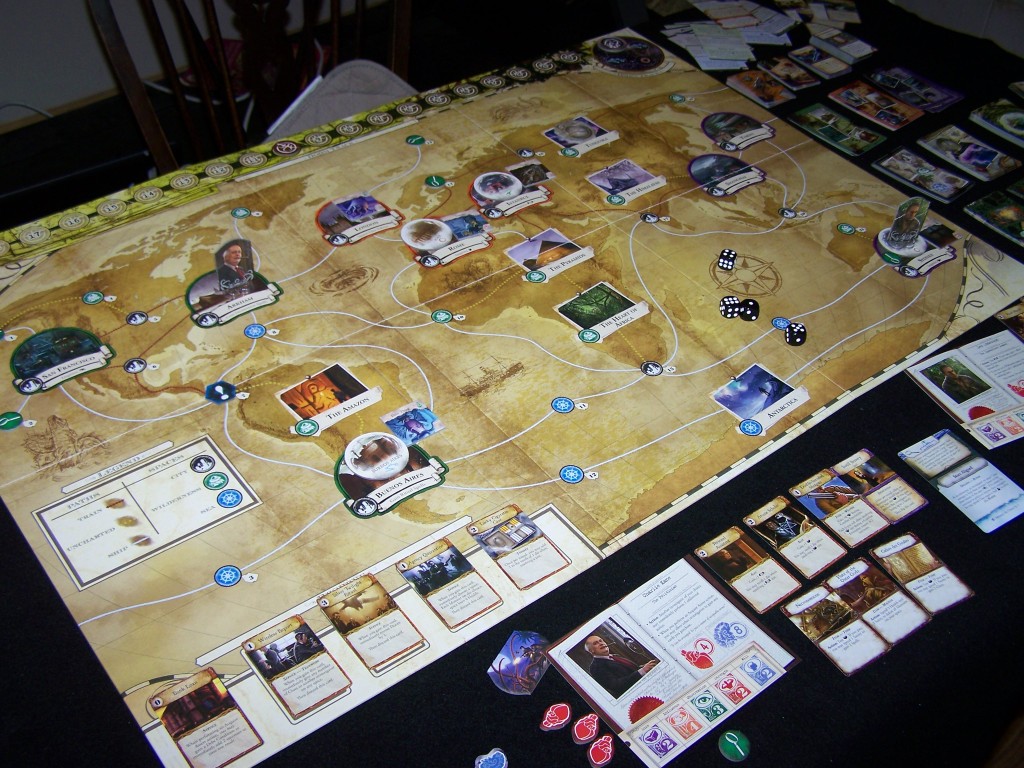 The game comes with a lovely big board that portrays a world map of sorts with all the various locations and routes scattered around it, the iconography is simple and everything is very easy to understand, there is also a neat little key on the board should you be confused as to what you are looking at. Its not that busy and if anything is a little sparse.

A game turn plays out over three separate phases.

First comes the investigators action phase, you get two actions to perform and they can be travelling to some far flung location, have a bit of a rest (regaining health and sanity). If you are in a city yo can do a spot of shopping or book some tickets for a trip which will allow you to make one additional move dependent on what type of transport you selected and eventually some equipment and spells include actions that can be perform as well. 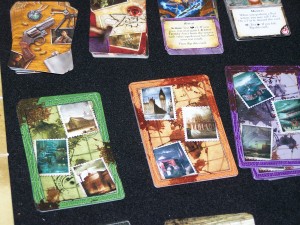 Once all that has been resolved then you move onto the Encounter Phase. So you’ve trekked across the globe to Antarctica maybe to uncover an expedition, or follow up on a clue. Scattered across the map are main locations that pull from color coded decks of cards and dependent on your location you read the flavor text that will set the scene and then will resolve a skill check against your investigator to see how well they did, some of these are pass or fails others will add more lore and options. You might also have to battle it out with a monster if you find one lurking on that spot.

And finally comes the Mythos Phase where something unpleasant will occur, in the early stages of the game when there are fewer gates on the map and monsters or conditions these can be less horrific. But as time proceeds these very quickly start to ramp up the problems.

And this is the thing, the start of this game is deceptively serene with a scattering of options on the board and it is easy for you to fall into a false sense of security and muddle about engrossed in solving some simple city encounters or other nonsense. What the game does is slowly creep up on you when all of a sudden you feel those icy tentacles on the nape of your neck and everything turns to poop, suddenly you are spread across the globe facing off against vampires, ghouls and elder beings barely keeping them in check whilst more gates are popping into existence spewing hoards of dribbling nameless horrors onto the board.

At its heart Eldritch wants to tell a story, unfortunately none of these will have a happy ending, but the ride is a hoot. As each character slowly tells their tale of discovering long lost texts in ancient libraries or duking it out with a mummy at the pyramids, even if at the end of the night the earth is going to die screaming and take you with it. Its the most fun you can have during a apocalypse. 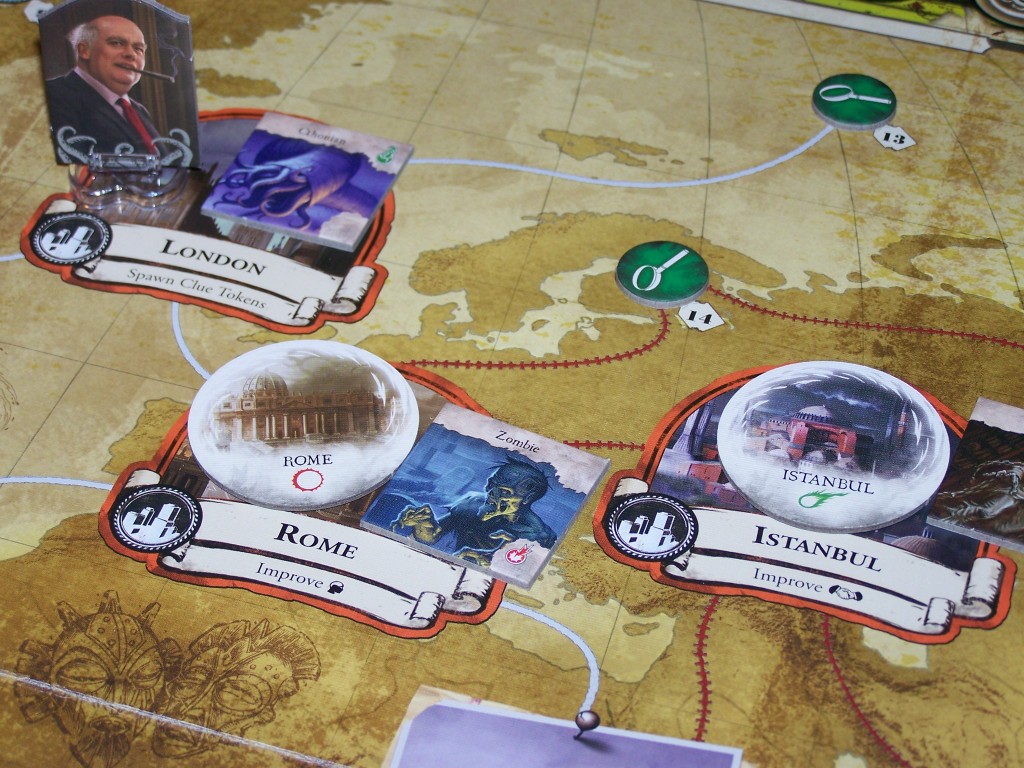 This game is all about the options, and its constantly throwing up more at you, like a child that’s eaten far too many skittles you are mopping up each fresh multicolored torrent of  horror only for a fresh wave to scatter across the board on its heels. it is a little unbalanced going from very little to accomplish to suddenly too much, but at least its not dull.

There are plenty of other neat touches like the various conditions and magic that crops up along the way. Want that shiny spell book from the store but don’t have the coin right now. Well you can take a debt, but the problem is you don’t know who’s picking up the marker and what the repercussions will be down the line or when they are going to be an issue. You see the spells and various conditions all come with two sides, so whilst that teleport spell you have would be really handy this turn to get your buddy across to the location of a new gate, you know you are going to be flipping that card when you do and the results are rarely ever good news. That’s this game through and through its like some schizophrenic abusive parent constantly offering some shiny new trinket in one hand whilst clutching a roll of quarters in its fist to pound you in the next, its always with trepidation you reach for that new bauble because you know that slap is never going to be far behind it. 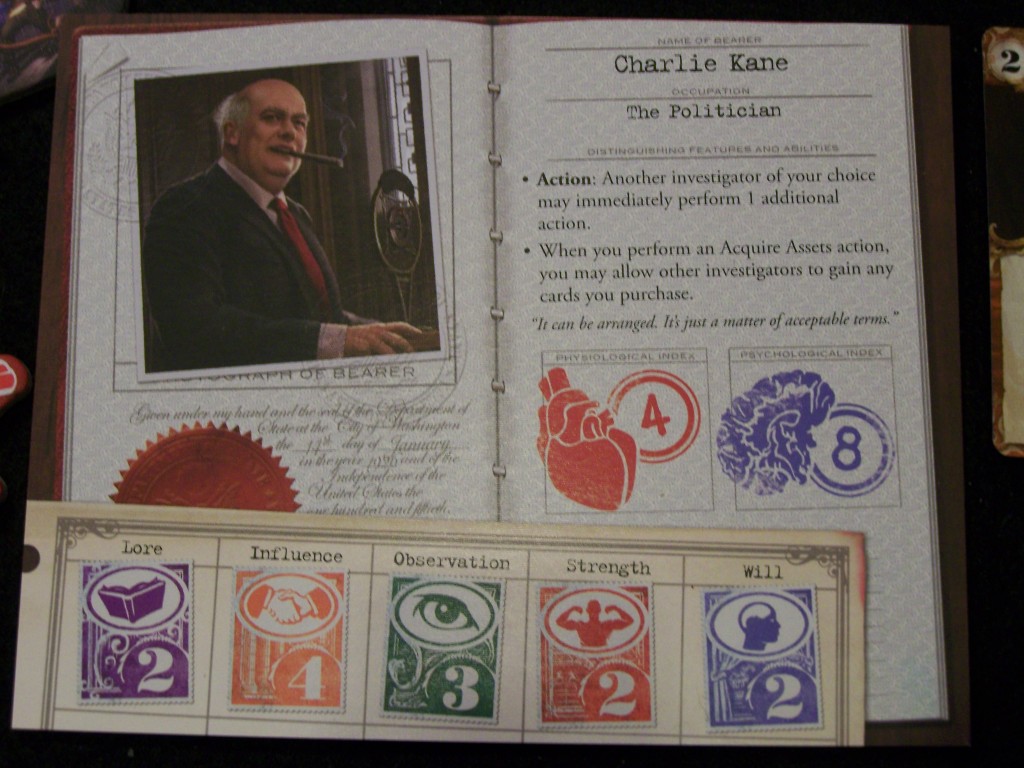 This is a co-op game with many of the separate characters having skills and actions that come into effect if supporting a compatriot in some foolish endeavor, its all about balancing who you take along for this hell ride. You can happily run about in your own little solo adventure but you won’t get very far. And whilst it could fall foul of the dreaded alpha gamer, there is so much randomness to proceedings I think it will even pummel the most vocal into submission eventually.

Whilst there is a lot in this box I have some niggles, it does feel a little light in places the exploration decks especially the city ones are small with only 8 cards in each, and whilst I never managed to cycle through a whole deck of one color it did come close and you play this enough and you are going to see the same cards coming up again and again. Obviously we are getting an expansion this is Fantasy Flight and i’m sure they have a few already waiting in the wings, here’s hoping that they focus at least one on beefing up all the decks available. The Mythos decks and especially the tailored ancient ones cards are a great addition and including a new set of unholy terrors with more items and location cards would be a win in my book. And dice, why only four bloody dice it should have had at least double that, fortunately I have more but still.

And as we’re discussing items these are also a tad random, I understand the need for the mechanic but it is a mechanic what does seem to pull you out of the game, with such a limited amount of purchasable equipment at a time considering you are travelling the globe it seems strange that there are only ever four items available to buy. But this is all nitty gritty, there are no horrible game killing mechanics and as a start off point this is a solid place to begin, I’m quite interested to see what they have up their sleeve for this series. I just hope they don’t fall into the trap that the Arkham expansions appeared to by bloating the base game with rules and boards without adding any real new experiences. Please keep it lean.

If like me you have yet to dip your toe into Fantasy Flights Cthulhu games then this is a great place to start, you get a solid game with enough choice and variety to tide you over until the expansions start to arrive. And its a pretty zippy play time I’d imagine a 3-4 player game should be doable in under two and a half hours with some change. So dim the lights and gather your friends and prepare to jump on, this is an express elevator to hell, and its going down. 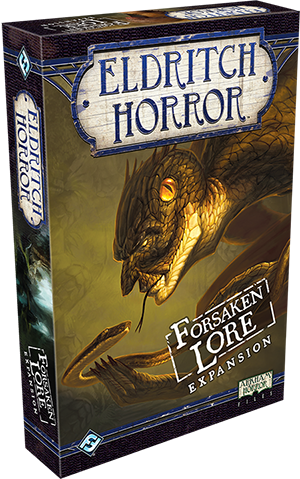 Hot off the presses as I typed this very review. Fantasy Flight have announced the first expansion Forsaken Lore. Which adds 200 new cards, 100 being expedition so it appears that they had a sensible plan all along. Brilliant. This is due to hit second quarter 2014.