Blades in the Dark Part 2 – How to Heist 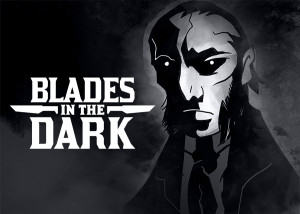 Blades in the Dark is a game about heists in a dark fantasy world. Last time we saw the creation of our crew, The Perishers. They’re a bunch of Shadows.

Vinnie’s playing Plank, a mastermind (his name is Plan K, as that’s how much he plans)

Ash’s playing Echo, a burglar who can shift into the ghost field

Josh’s playing Bolt, a long-range hunter with a ghost cat

Amy’s playing Bricks, who is very much like a person called ‘Bricks’ should be

I’ve run Spycraft and Call of Cthulhu a lot in my time. They’re both games where people make a ton of plans. The GM spends a lot of time making the problem, laying the clues and false leads. Then half the play time tends to be planning, backtracking, planning again, then going through with the mission/investigation and weathering any problems which take place during it. That’s fine, but Blades in the Dark handles missions in a way which cuts out all of that. It starts where the drama starts and back-fills with any kind of planning in a way which is impressive.

I’ll tell you about the first mission and how the rules work with it.

Ulf Ironborn was a new gang leader in Duskvol, coming over with immigrants from Skovlan and making his mark in a brutal fashion. He turned up at The Docks, claimed a bar as his and pinned the bartender to the wall with a large pick. He’d been shaking folks down and making them more resentful of the Skovvish. His prized weapon was an oversized mining pick which few can carry and The Perishers were tasked with stealing it.

The group decided to create a fake pick and to sneak in from the rooftops. Nothing more, as that’d be filled in later. I created the following map of the area: 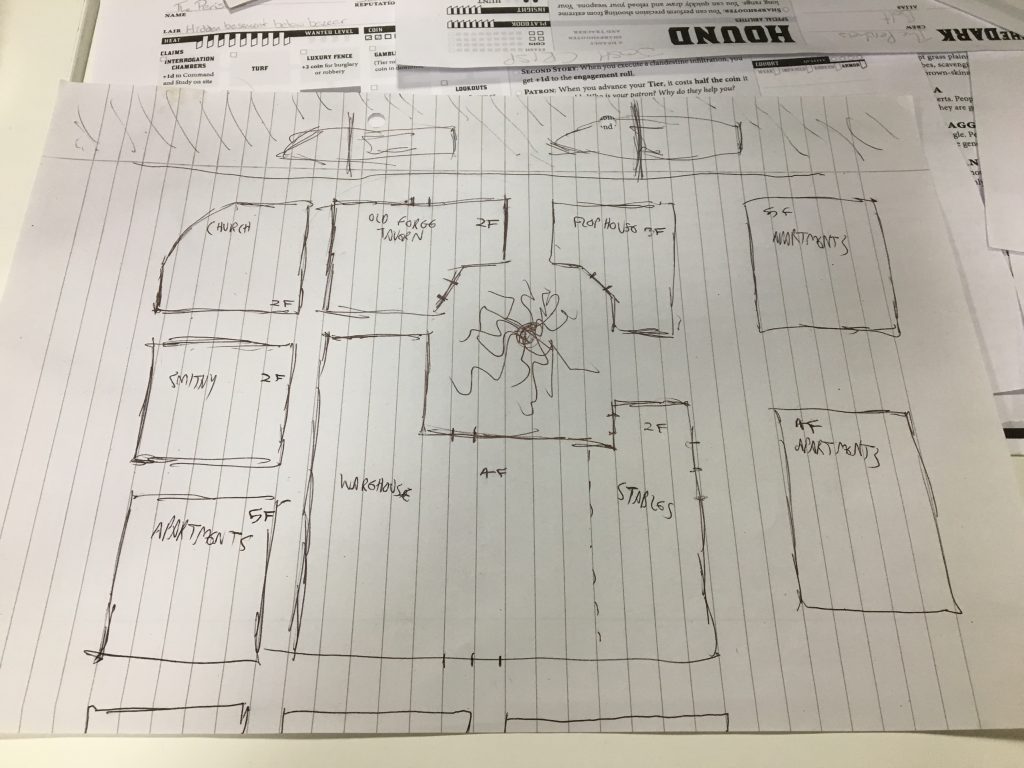 Ulf was a proud gang leader, eager to get himself seen as a legitimate threat. He had Skovvish folks around to make sure none of the people living in The Docks stepped out of line while he was building his empire. The last lot of bluecoats (police) to wander down there didn’t come back. So now the group had been hired by the Lampblacks (another local gang) to steal Ulf’s pick as a way of giving him a Doskvol welcome to remind him of his place in the pecking order. The group had no status, so they had to accept whatever work they could.

In a game of Blades in the Dark, players work out how they’re entering a heist and how heavy a ‘load’ they’re carrying, but not specifically what it is. The entrance in this case was that they were going to sneak in. Most of them via the rooftops, although Bricks will have had work with people in a nearby warehouse for a few days already and could smuggle Vile in. There was a roll to work out the position of the group and how well their situation was. This time, the group arrived well, but the group were on guard after some fights with The Crows. Now let’s talk about that ‘load’ I mentioned earlier. It’s basically a measure of how much gear you reckon you’ll take, even though you won’t have to decide what you’re taking until you need it. So if you need some throwing knives then you tick them on your list and you remembered to pack them for this mission. There’s a limit, though, as the more slots you take with you, the harder some physical actions will be.

Spark summoned spooky mist so Bolt could pick off rooftop guards using a crossbow and her ghost panther. This was an action and I guess it’s a good time to cover those as they’re a little different than those in some other RPGs. As GM I tell the player that what they’re doing sounds like it’ll take a roll, but I am prohibited from saying which skill. This was tricky to get my head round at first as a GM who’s used to saying, ‘that sounds like a climb check’ or ‘that sounds like you’re trying to defy danger’. The player explains their approach with a specific action type, so in this case ‘Prowl’ was being used to quietly take down guards. You work out whether the player is approaching this in a controlled, risky or desperate position, each of which will have different repercussions for low rolls. You take an amount of six-sided dice equal to your Action (two dice for Bolt), then add another dice if you spend Stress to push yourself or ask for a devil’s bargain. More on those later. You roll the dice and pick the highest. On a six you get what you want and on lower results… less so. 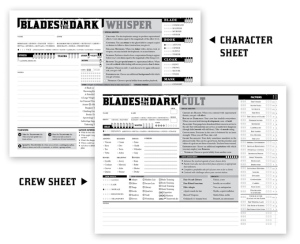 It sounds a little complex and at first looks it on paper, but a lot of the details are on character sheets and this is a game where it’s always good to have a page or two printed out or bookmarked for the GM. Bolt was successful at stopping some guards but drew the attention of others. This was fine, it would mean that Bricks could move around freely.

I mentioned a couple of old things taking place in the past and Vile getting Bricks to smuggle in his chemicals is a good example of this. You don’t make plans in this game like you did in games like Spycraft or Call of Cthulhu. You start in the action and then if you need something you can flashback to when you did it. You can say that you arranged for Bricks to take the chemicals in and make a Finesse roll to have them hidden among innocuous items. This lack of difference between past and present tense if great for making sure that players can seem competent and adapt to tense situations.

The warehouse went on fire and more of Ulf’s guards ran to deal with what looked like the work of a rival gang. Ulf himself remained on the street outside the pub, looking out for any further danger. He summoned his lieutenants to him and got them preparing a small boat to sail down the canals and to safety… with his pick.

Bricks managed to stay near the lieutenants and get near to the pick. One load slot was taken up with a fake version of the pick, which Bricks was large enough to keep on their person. This required a Tinker roll set in the past and the group managed to work together to make it. There needed to be a distraction to allow Bricks to switch the real and fake picks. That’s when one of the lieutenants started to act weirdly. 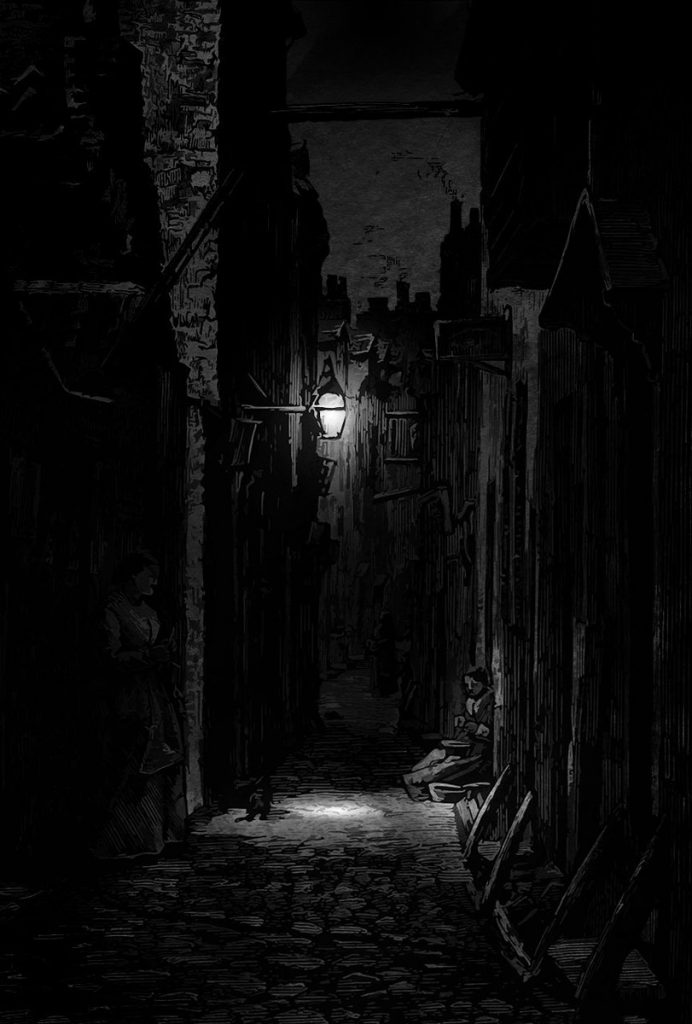 Spark flashed back to the previous day, where he was looking in the canal for any bluecoats ghosts on this street. He was disguised and wasn’t bothering anyone, trying to lie low as he communed with ghosts. A rookie cop’s ghost floated to the edge of the ink-black canal. He died at Ulf’s hands on his first day on the job and was willing to help Spark with taking the giant down.

Now ghosts… Ghosts are more messed up here than in a lot of RPGs. Spark is a Whisper, who can commune with the ghost field better than most. He could get them to help him, but this doesn’t stop ghosts being completely volatile and horrendous. In the present, one of Ulf’s lieutenants was being possessed by the rookie. He ripped out of the lieutenant and started to tear apart Ulf’s soul. Bricks made the swap and ran while the other lieutenants tried to fight the ghost. Ulf and the ghost both fell into the water, where tendrils reached up, grabbing for them both. Never go into the water in Doskvol.

The group fled, not staying behind to make sure Ulf had died. They’d completed their contract and were safe… for now. I’ve been catching myself smiling that GM smile. You know, when players decide to do something so perfect as it gives you all the ammunition you need to have your fun with them later. I’m sure I did that smile when they said they weren’t sticking around to check if he was dead.

So that’s the basics of Blades and how actions work. Next time I’ll tell you about a few more heists in the world of Doskvol.

Blades in the Dark is available at https://bladesinthedark.com/ We’ll return with another couple of heists.

0 likes
Reviews
I can't see its so darkstabbyvery dark