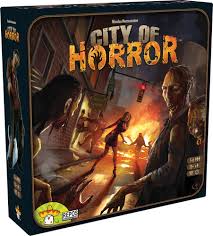 A Zombie theme that gets it right.
Fantastic components.
You can punish your friends and act the arse.

Its another Zombie game!
Very gloomy looking.
Game play can be mean.

This ones a great Zombie game, it captures the tension of being a survivor in a zombie movie. For once it focuses on the humans and not murdering hoards of the undead and thematically one of the closest to genre that we've seen. 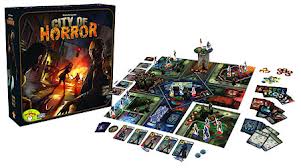 City Of Horror is surprise surprise a zombie game, you’d have to have been living in a cave not to have noticed board game designers obsession with this genre. To be honest I find a majority of the zombie games on the market all a bit samey and at worse dull. I’ve played Zombies from Twilight Creations and enjoyed it for what it was a simple run around and shoot zombies game, but it can drag on a bit, still the miniatures are nice.

The big issue I have with most zombie games out there is that they miss the point of the genre, it was always about us humans and how we do terrible things to each other (just watch any of Romero’s movies) the zombies were always this slow encroaching doom that we would bring on ourselves, usually through some stupid or greedy action.

Well I’m pleased to confirm City of Horror gets a lot of this right, its all about the humans, the survivors in this game are a mixed bag of the staples of horror and disaster movies, including a slimy suit, a hard nosed cop and of course everyone’s favorite a pregnant women. Let’s be clear from the off, this is not a nice game, at some point during the proceedings you will exhibit all the most base and loathsome characteristics of the horror genre scumbag. You can shake your head and look all holier than thou, but i bet you’re the first in line to shove a defenseless pensioner to the flesh munching hoards to save your skin.

And now a word on the components, this game is stunning. Once it’s set up and everything is ready to go it looks so inviting, in a post apocalypse kinda way. The art on the board and cards is all of a high standard, and all looks suitably gloomy and horror movie like. Its a nice big board that slots together and even has a 3D water tower that is assembled and overlooks the ensuing carnage (there have been reports of the boards warping, I’ve had my copy almost a year and have not encountered this problem, but be warned). 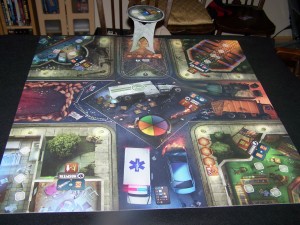 All the cards and board locations have a well designed icon on them referring to all the various actions, for my first couple of play through’s I needed the reference sheet to remind me what these were, but after a while you get the hang of it.

The board is split over six locations a Church, Gun Shop , Hospital and a Bank. These are where all the main carnage will ensue but there is also the aforementioned Water Tower and the Crossroads (you don’t really want to be standing out here in a zombie apocalypse). 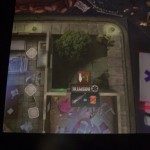 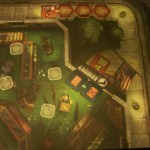 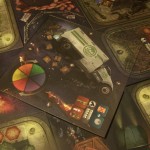 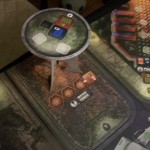 The Water Tower (or sitting target) 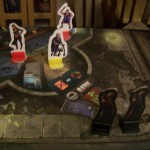 It’s kicking off at the bank.

Each of these areas all have strengths and weaknesses, but i’ll get to that in a bit.

So the game is actually pretty straightforward, each player starts with a random selection of survivors, each of these has one specific action most are usually a one time deal, as it will cost you important items to recharge them. 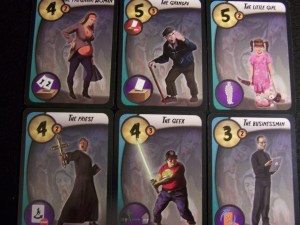 The game is played over four turns, each representing an hour of time. Your goal is to survive till that last hour, make sure you have amassed enough vaccines for your survivors and then get to the choppa!!

And that all sounds pretty easy right, well its not. For starters supplies are very limited and each turn some will randomly appear on the map it then becomes a scrabble to see who can get to them first.

If your up the water tower you can take a look at the forthcoming invasion card – this will give you a clue as to where stuff is going to drop and where the undead are going to show up, this is kept secret only the players in the tower will know this and it can be a major advantage.

Then everyone selects a movement card. They are all simultaneously revealed. 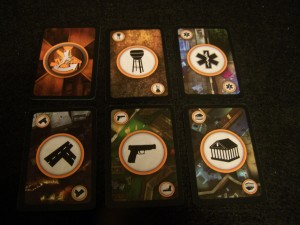 Then the invasion card for that round is played and whatever zombies and supplies it states get put down. 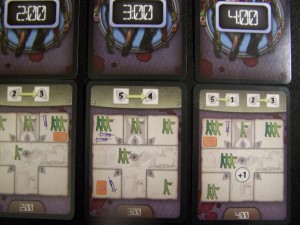 Then its time to move. Each player moves a character to the location on their selected movement card from earlier. But be warned locations have limited space, and if its full up you might end up left standing out in the street (not a good idea). Hey that guy in the water tower mysteriously got his people to the church where the vaccines dropped, swine!

Resolve location – Or as I like to call it the poop hits the fan round. Each location has a ability whether its picking up vaccines at the Hospital or refreshing your special abilities at the Church. All of these powers will involve discarding action cards and trust me these are limited and once they get low things can get really desperate. Then to make things worse you have to check if your building is still secure. Each of the areas has a max limit to the amount of undead that can be thumping at the doors, when its reached things go from bad to really really bad.

The Vote – Ah yes, you know earlier when I said this game was mean, well this is the point when you find out who your friends are. Each player has a colour and the more of your colour you have at a location means you get more votes. Now this might just be resolving who gets the pick of the goodies there, but it can be much worse. If the undead are coming through the doors the only option is to chuck someone to them and save your skin (you see where this is going don’t you). This is when it becomes a desperate negotiation for supplies and who gets to live, when a location has an even split of votes you can see everyone casting looks of suspicion between the others, or maybe a subtle nod in the direction of that annoying accountant who’s been hoarding all the food. 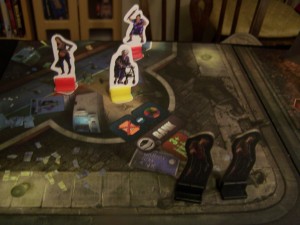 It’s kicking off at the bank.

Like all good zombie flicks it all starts civil and soon descends into finger pointing threats and petty squabbles, and then some poor bastard get’s shoved to the hoard. its usually at this point you start to find out who your friends are. This is when the action cards come into play, you see these have a variety of skills be it moving zombie hoards to a different location, or a good old shotgun that will blow a bunch of them away, or maybe you’d like to put a gun to one of the other players heads and steal their vote, yeah it can get nasty. All of these cards play beautifully into the theme and encourage the mayhem to just keep on coming. 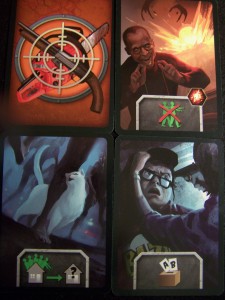 Coming back to the characters. Each has a skill that functions similar to the action cards and locations. These are brilliantly thematic, that pregnant women I mentioned earlier well she can give birth and then has two votes, the granny well she can’t move but you can use her power so she can, the kids can hide avoiding votes and zombie attacks. Depending on your characters each game your strategy is going to be different. There is (of course) a downside to these powers, once used they reduce the victory point value of that character, and that may very well be the difference between wining or losing.

And then there’s a bunch of other little thematic delights, the crossroads there’s nowhere to hide but there is a truck full of food that you can snatch for the victory points (hopefully you don’t get an empty can) but they also give you a useful negotiating tool. And that Water Tower and the Armory, using explosives near them will catch them on fire, use too many and they blow. The Tower comes crashing down killing anything on or near it, some nice act three carnage to add to the mayhem in true Hollywood style.

And then finally that fourth hour rolls around and the chopper arrives and its a mad dash to get on-board, if you’ve got the antidotes that is, otherwise your going no-where brother. Then the points are tallied, characters, food and then you get to snarl and snipe at the victor. But there’s more if you’ve played the game to death and think you’ve seen all it can offer, than fear not. Because on the reverse of all the game boards is an alternative (harder) version of the same game that adds a nice tweak to some of the locations.

So should you get this game? Well if your a fan of the zombie genre and are looking for something that has the thematic feel of those stories then this is the one for you. But be warned this is not for the faint of heart, to get the most out of this game you need to be pretty thick skinned. With the right gathering of people this is a barnstorming tense couple of hours of game play, alliances will switch constantly bargains will be made and deals welshed on. By the end you’ll have a story to tell and probably a few less friends, but you’ll have had a big rotting pile of fun.