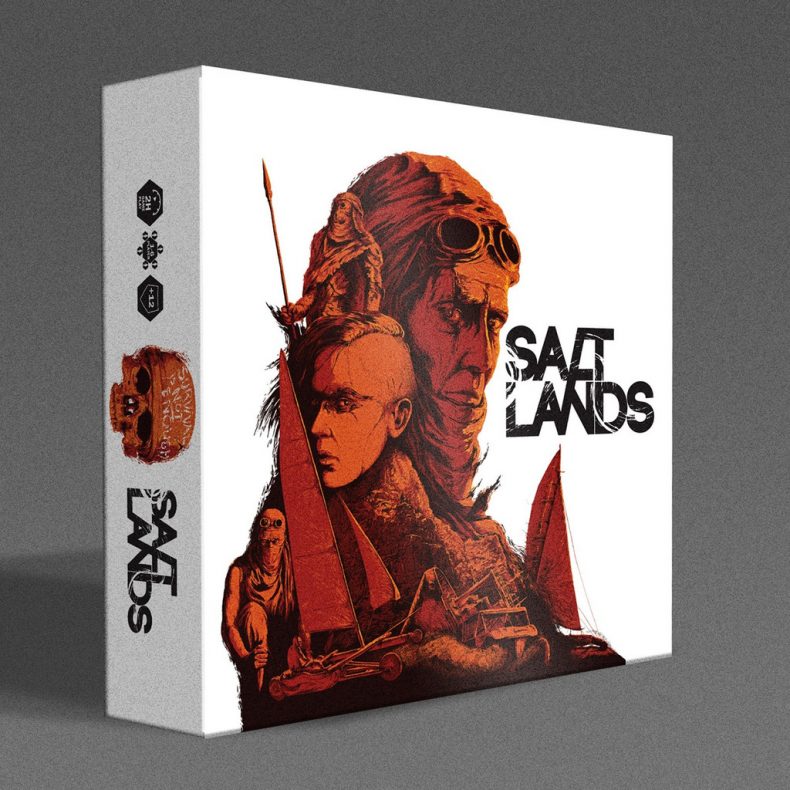 The post-apocalypse is one of my most beloved genre’s thanks in large part to a petrol-head father, Mad Max and the fact we watched them pretty much on a constant loop in my formative years.

It’s a disappointment then that hobby board games are still a wasteland when it comes to this genre; I endured Games Workshops old Battlecars which if you squint really tightly just maybe feels like a Mad Max game. GW did eventually do right by the genre with Dark Future its mechanics brilliantly simulating the physics of driving vehicles in high-speed battles on the highway, its fantastic white knuckle fun. However, its rulebook, Gah! Even in the wake of Fury Road I still couldn’t bring myself to go through the pain barrier of getting this back to the table. 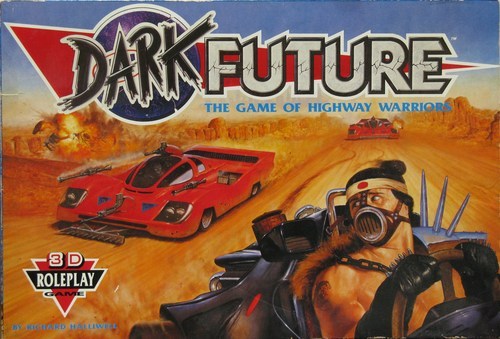 More recently there has been a flutter of Kickstarter projects most notably Posthuman doing the zombie thing and Defenders of the Last Stand from Richard Launius. All fine I’m sure, but they haven’t delivered on that post-apocalyptic world of George Millers violent adventures I’m seeking which brings us up to speed and to Saltlands from Antler Games. 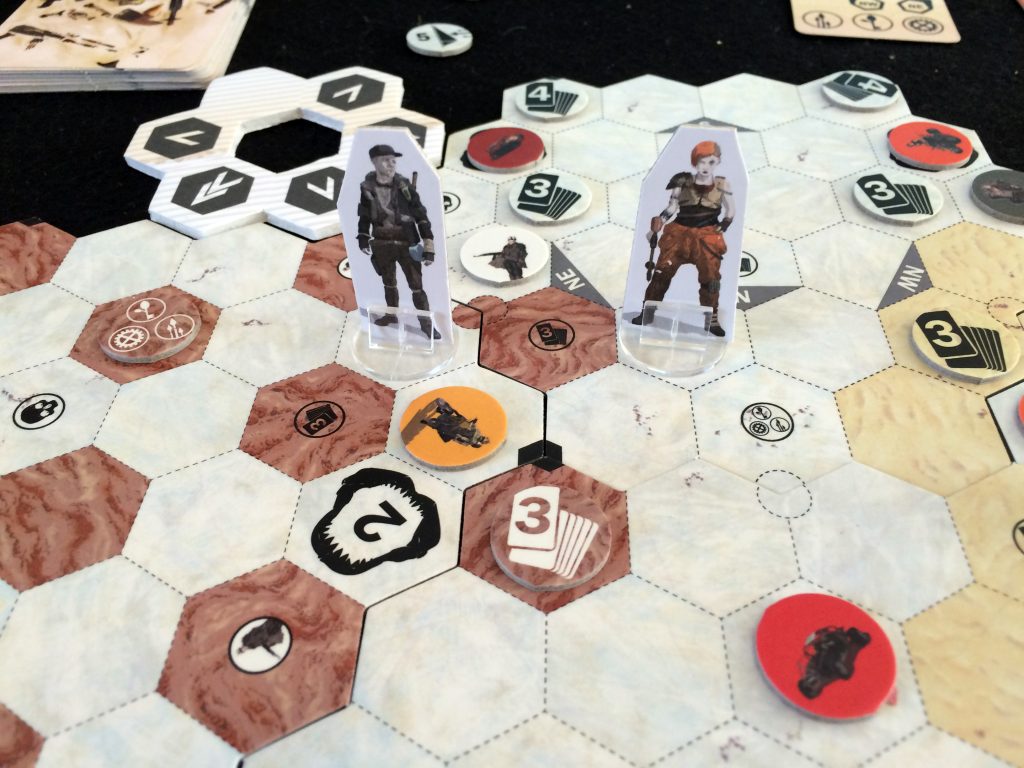 This plays up to 6 and its set up is straight out of any cult in the making straight to video epic from the 1980’s. Players assume the roles of a peaceful colony of survivors on a once great ocean floor now an unforgiving stretch of desolate wasteland. Unfortunately, their happy valley is about to become anything but as on the horizon is the dark cloud in the form of a horde of gas guzzling raiders intent on some serious antisocial behaviour.
With certain death a certainty, the only option is to run away! Fortunately, our heroes have one advantage over the petrol-heads, the wind. You see we can harness the harsh winds of the plains and hurtle about the territory on Landsails, think of these as a cross between that snazzy Trimaran Kevin Costner had in Waterworld and a surfboard with wheels. 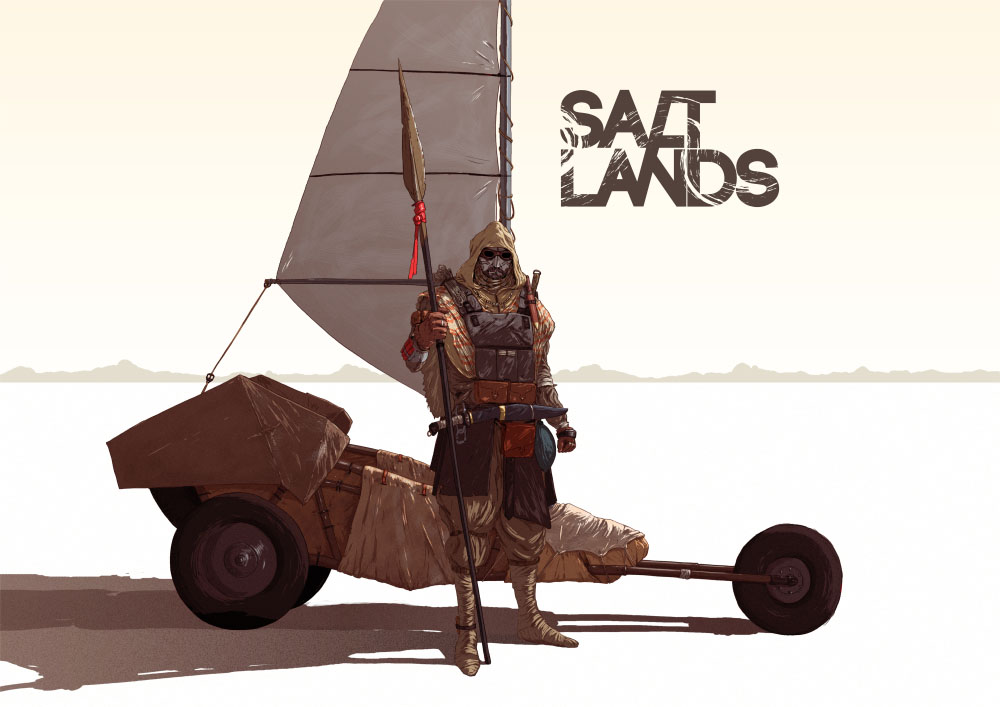 And you’ll need to do plenty of moving about because somewhere out in the wasteland is the prophecised promised land… well lands, you see there are rumours of 3 colonies offering sanctuary and finding one of these is your only chance of survival. And that, in a nutshell, is the game, strike out into the wasteland alone or cooperatively and battle against the gangs of roaming marauders, scavenge weapons and equipment and follow the whispered rumours in the hopes of salvation, that’s if somebody doesn’t beat you to it. It’s a dog eat dog world out there don’t trust anyone. 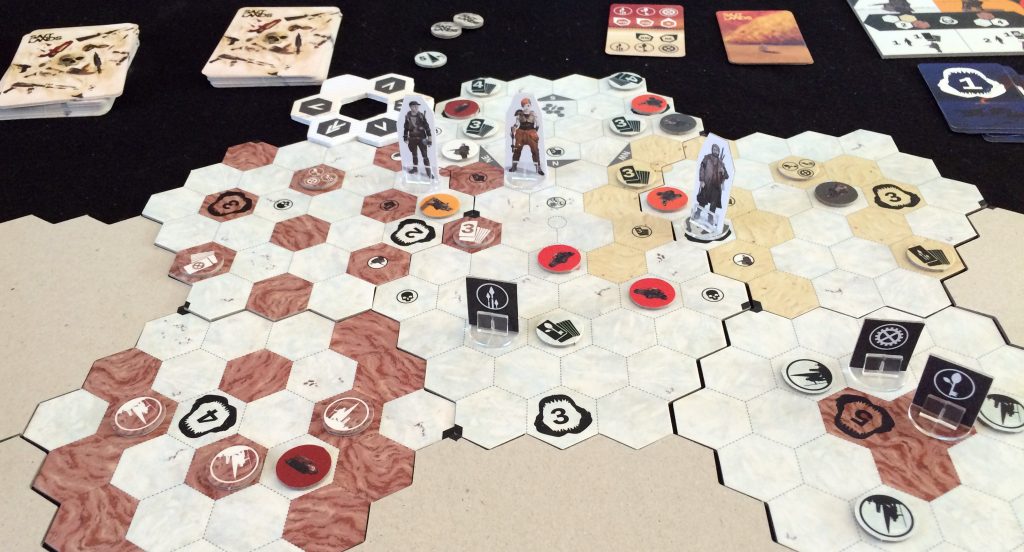 So at first glance, Saltlands looks complicated with its hex board, stacks of cards and tokens and a board that devours tables. When initially set up I died a little inside where was the post-apocalyptic fight for survival this thing looks like a bloody Avalon Hill wargame. My spirits weren’t lifted after trying to get my head around the rules, the struggle came from the completely icon led cards and tokens resulting lots of checking and rechecking the reference supplied with the rules. However once accustomed to them, that clunkiness and confusion are left in the dust, and it’s clear this is actually a streamlined and rugged bunch of mechanisms all purring together like a finely tuned V8. 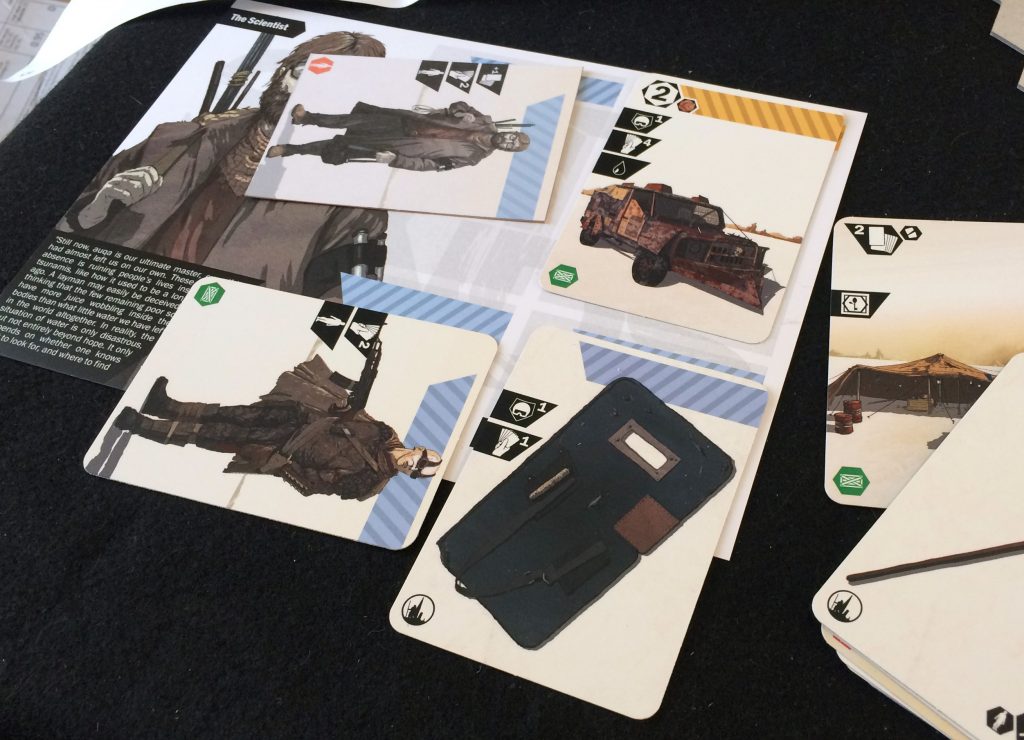 Gameplay is via a card and action allocation system. Everyone has a player board with 4 slots, two of these are automatically filled with your character and starting vehicle leaving the others free for armour, weapons, rescued survivors or anything else that you can scavenge and put to use. You also get a hand of cards representing the other detritus and bits and pieces gathered along your journey.

On your turn, you get to move once and perform any actions from the cards in your hand or what’s around you. There are two different types of action either Single Use that discards a card or Crew requiring a character to be exhausted to use an item or pick up a token from the board. This card play is the core of what you’re doing and initially, actions can appear very limited which is where the life-giving water cards come in. These allow you to refresh exhausted crew and equipment enabling you to then repeat actions. It’s an elegant little thematic touch making the search for water essential for your survival as anyone with a stockpile of H20 can build powerful combo’s and carry out multiple actions during a turn. Some weapons offer two uses a refreshable weaker hit or the option to discard the card for a more powerful blast, so finding yourself in a desperate situation with Raiders closing in you might have to sacrifice valuable gear to live to fight another day. 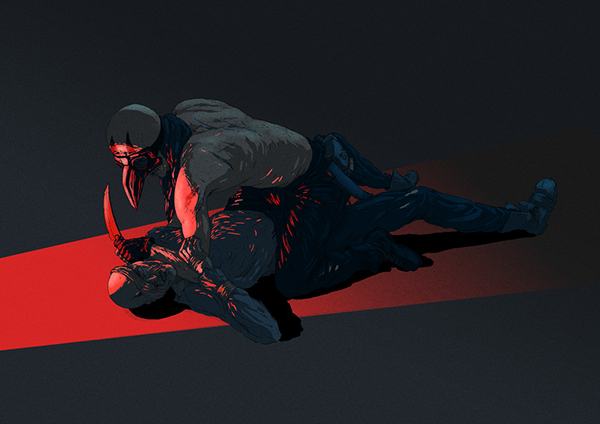 And talking life let’s be blunt in Saltlands it can be cheap, this game features player elimination and I was a little concerned going in, and not because I’m a namby-pamby Euro player or don’t like ‘player elimination’ I play goddam Talisman I laugh at death. No, it’s that the Raiders are on your tail from the off there’s no foreplay here it’s a violently blunt welcome to the game and its setting from the very naughty end of a sawn-off shotgun. It’s possible through poor choices to be caught stripped and left for dead before your first turn is up, it’s unlikely but could happen and to the unprepared this is a brutal wake-up call. It’s also a cracking way of introducing players to the violent world of Saltlands and a good way to get everyone playing nice for the first couple of turns at least. 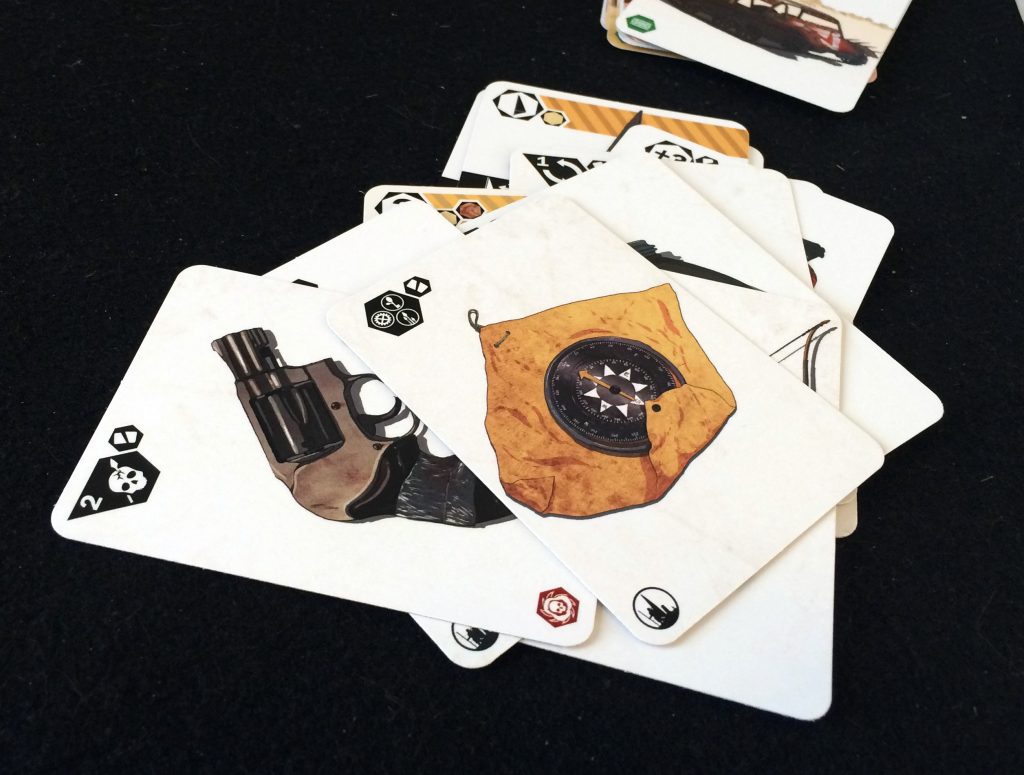 when you die, everything is discarded and you re-spawn in the starting zone, die again and its game over. Now that sounds pretty unforgiving leaving you trailing behind the other players with no hope of catching up. However as cards are discarded throughout the game, these go into one big pile so in the latter stages when you do meet your demise then at least you’re drawing from a deck now populated with a lot more epic loot and equipment. Thematically it’s an excellent representation of how in the movies when our hero is beaten bloodied and left for dead and then comes back for vengeance, well think of this like that.

So the other action available during a turn is move. At the start of the game, players have the standard settler landsail, which allows me to introduce one of the games standout cool mechanics the wind. There’s an indicator on the board and wherever it’s pointing will effect how fast you can travel and in what directions, using the wind significantly expands the ground you can cover and is essential in the early game for outrunning the Raiders.
You could, of course, do away with all of this wind dancing crap and take out a Raider and steal his ride, these vehicles come with advantages and disadvantages. The Raiders cars and bikes can travel over terrain that the sails can’t, offer better armour against attacks (of which there are plenty) but are limited how far they can move a turn unless using precious fuel cards to boost this distance. In the late stages of the game, it can be advantageous to outrun opponents so a well-armoured vehicle isn’t always your best choice. 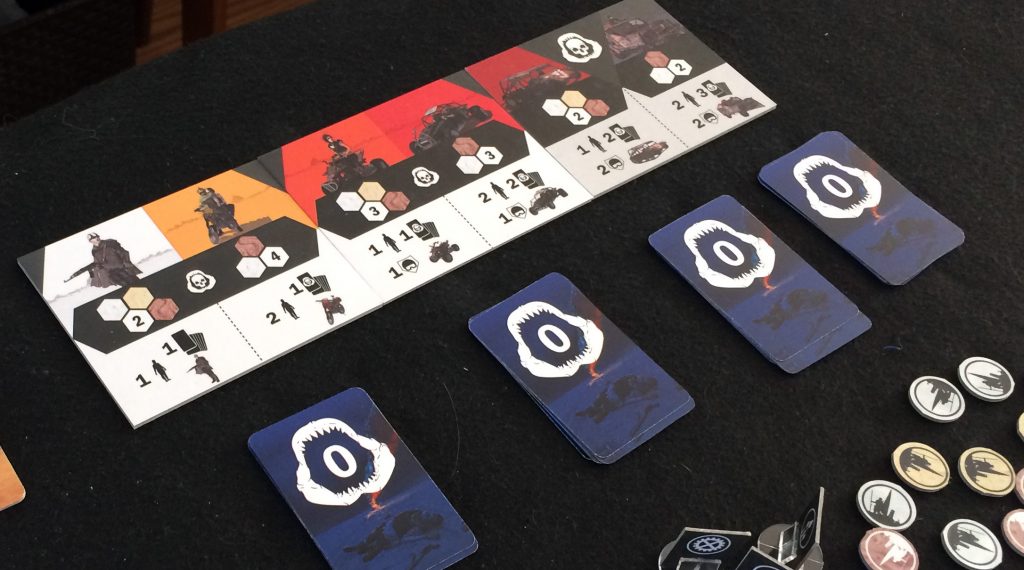 And as we’re discussing outrunning things lets take a closer look at the Raiders, these guys are the real deal not the grubby chain smokers from Waterworld, these nutters are on par with Lord Humongous and his dogs of war. After a player completes their turn they select a Raider clan to activate and all of those will charge towards the nearest player and if they can get within stabbing distance carnage will occur. Each clan has a deck of damage cards starting from 0 and ending in 5 that represents a slowly escalating threat of violence and movement when all of a rounds cards are flipped then more raiders are spawned, and we move onto the next tier of madness.

Now all of this carnage and racing about has a purpose and in an interesting spin, the objectives that will eventually pinpoint the victory zone are rumour markers. During the game, these hop from territory to territory controlled by a deck that must be exhausted before you can reach these end goals. As well as draining this deck you’ll need to have found three matching items relating to one of these salvations, here’s the neat thing you can go it alone or team up with another fellow wastelander to work together to find all the parts required. All of these items, cards and equipment, are gained from the tokens spread around the board as you slowly uncover the territory you can start to plan where’s best to head or avoid. It can be a viable tactic to lead the raiding parties away from a zone and loop back around, but be careful that someone else doesn’t sneak in behind you. 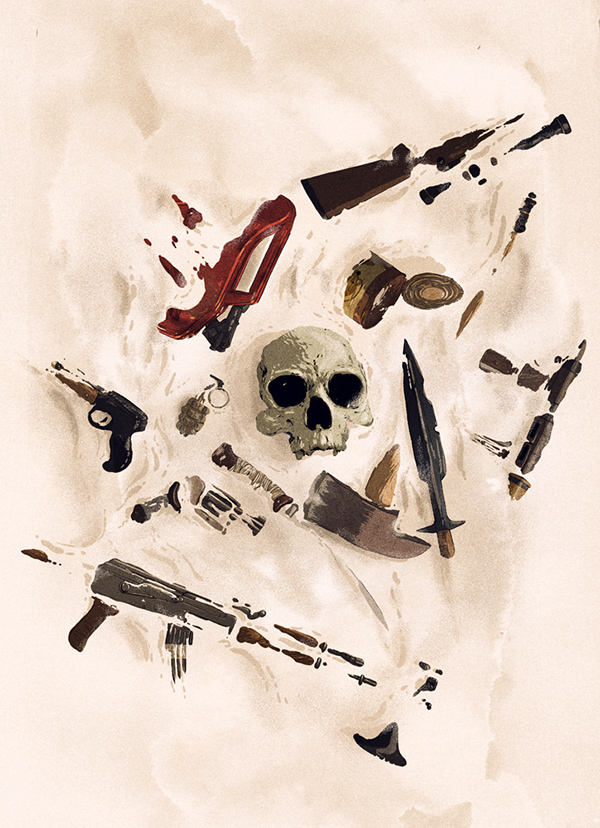 That’s the basics, but there are many other subtleties to the game. What’s great is it allows you to decide how you’ll playing imbibing everything with a sandbox quality, so if you want to go it alone then nothings stopping you, want to team up sure there are advantages and disadvantages to either choice. If cooperating it may well influence what raiders get activated, who’ll trade with who and even the victory conditions.
You can win as a team if you’re careful about who’s picking up what victory cards, there is certainly the option for sudden, inevitable betrayals in the closing moments of a game as everyone makes a mad dash for an escape zone.

There’s plenty of game here the characters offer enough subtleties that each has an interesting mix of strengths and weaknesses and as there’s no predefined path to a victory things stay fresh offering plenty of reasons to bring this back to a table.

One of the draws for me other than setting was the art and design of Bazsó Lossonczy his work really pops, I get a Heiko Gunther minimalist ‘Glory to Rome’ vibe to the washed out art and design that effortlessly captures the theme of vast endless sun-bleached deserts. The character and card art have this cool quasi-comic book feel to them, resembling the work of Paul Pope It’s a unique look that really draws you in, and I’d be happy to hang some of this on my wall. 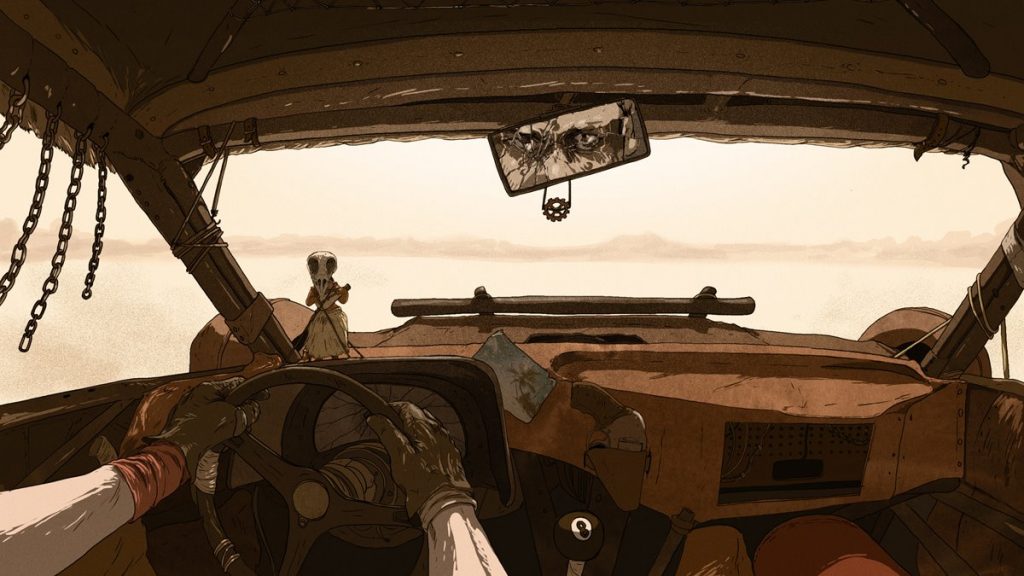 I see a lot of Kickstarter games, and I’m often approached by first-time time designers and publishers with products, and this is one of those times that I’ve felt I was looking at a project that had really been refined and developed. The design feels tight and lean there’s no flab or needless mechanics this is a product that’s been nurtured and loved.

Now this is based on a review copy of the game and if I’m honest as it stands this is a handsome beast I know the gents at Antler have been beavering away since this iteration only improving on what we have here. The finished game includes mini’s for the Raiders replacing the tokens and even more of that gorgeous art.

If you’re looking to get your post-apocalypse rocks off then, Saltlands ticks those boxes. While I love the highway warrior hijinks of some recent releases and those coming down the road, they’re microcosms capturing brief violent sketches. Saltlands steps back throws you a sharp and some yarn and growls at you to go stitch your own blood-soaked tapestry of a beat up world, you’d have to be mad to refuse.