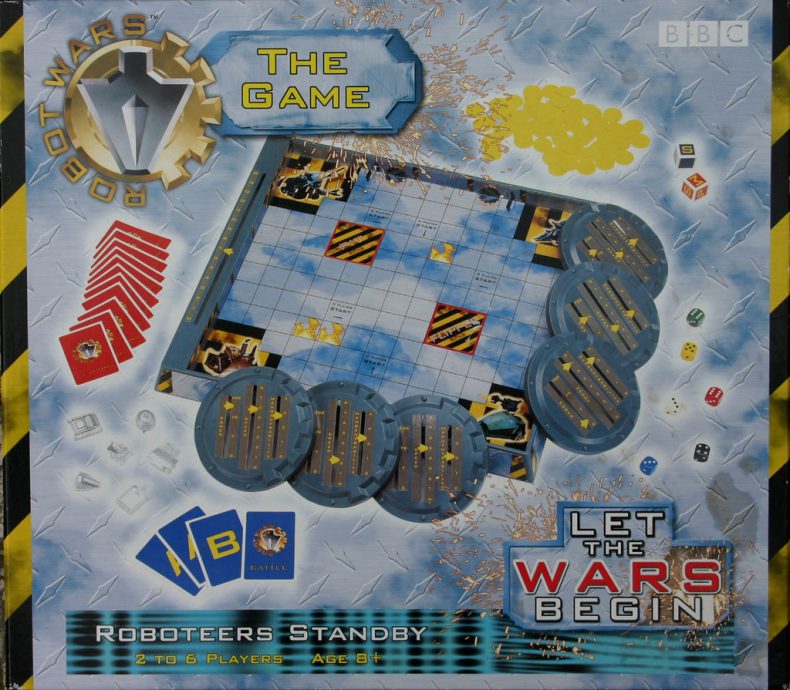 This is my life now.

I reviewed Lost, 24 and really should get round to writing a review of Ground Force. My ‘friends’ have seen this and decided that I’m the bad charity shop licensed game reviewer, so I was sent Robot Wars: The Game, to review. Thanks, Glen.

At first, I thought what most of you probably are, that it’ll be a crap RoboRally. I made that assumption, put the overly-large box aside and promptly didn’t bother with it. Still, the box was there, getting in the way and impossible to truly forget about. Seriously, look at that huge box, with In a Bind there to show the scale: 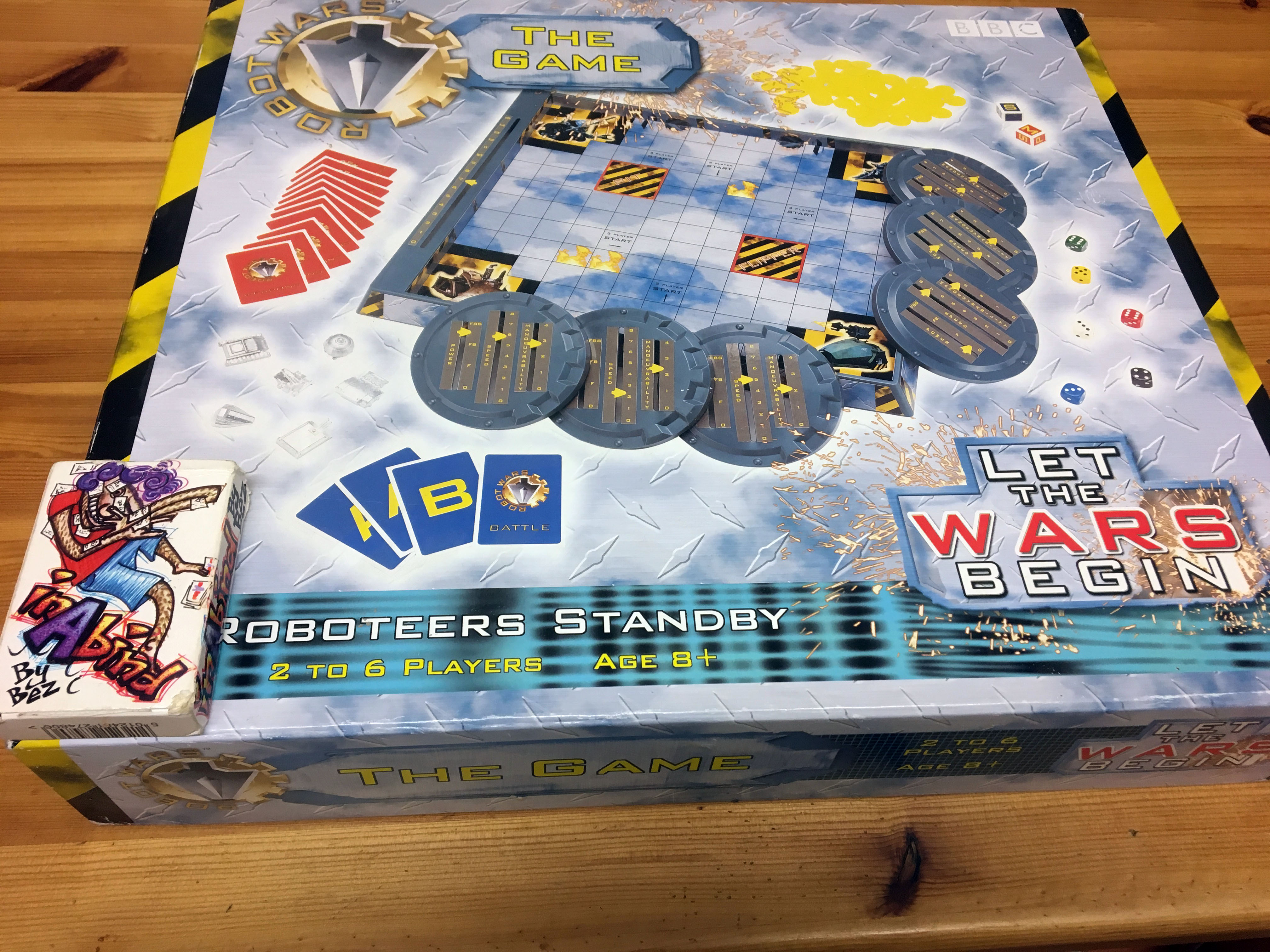 It took up so much space and I’d recently moved house, followed by the arrival of my girlfriend. Robot Wars really needed to go. There was a nagging thought though… what if it was good?
And even if it wasn’t, I might get RoboRally one day and wouldn’t it be cool to replace the robots in that with the ones from Robot Wars? Sir Killalot or Matilda racing around a board, wouldn’t that be cool?

Well, I finally got round to playing Robot Wars and was disappointed on both counts.

Because they live with me, Emma and Lee were forced into playing this game. There was a guest, but he sensibly fled before this could happen. 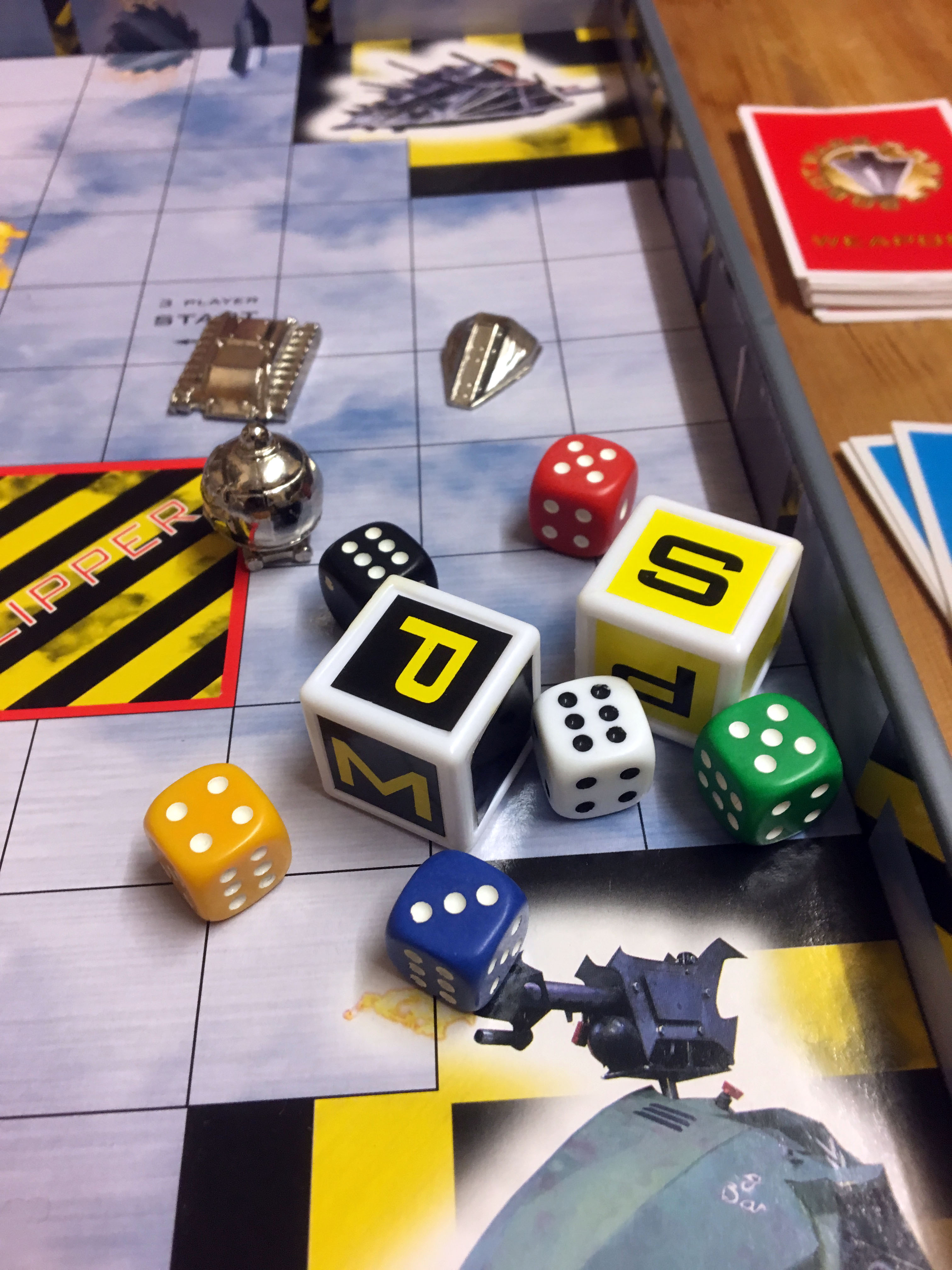 Let’s have a quick look at the components. There are a few d6’s of different colours, one for each player. There are two hollow plastic d6’s with stickers on for damage and for the house robots. They feel super-light and quite brittle. There are six control panels which make up a lot of the bulk inside the box. The sliders on them put Betrayal at the House on the Hill to shame and only Betrayal at the House on the Hill. There are a bunch of bright yellow tokens embossed with the Robot Wars logo and weirdly reminiscent of Pac-Man’s power pills. There are two decks of cards for weapons and battles, they’re all printed on a glossy-yet-cheap kind of paper which shuffles badly and feels unpleasant to touch. There’s a massive plastic tray serving as a board with a turn marker built in. This feels like they simultaneously blew all of the budget on extravagant components and yet didn’t spend anywhere near enough. The rules are, as is tradition, printed out on a bit of folded A4 paper. Nice. 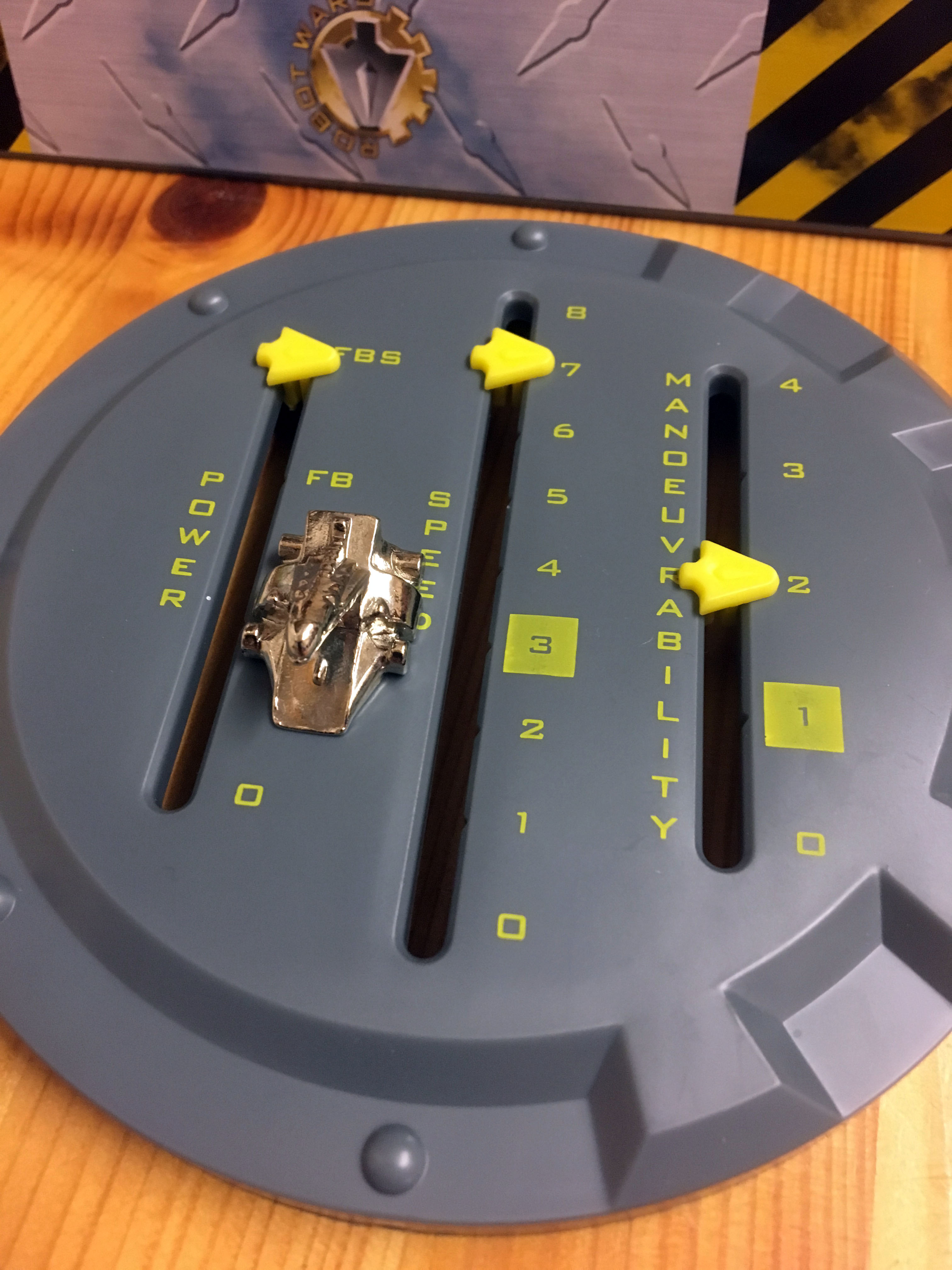 In a way, this is an oddly thematic game. We all start off building our robots. We take a control panel, a die and a miniature. We roll the d6 ten times, getting a yellow token for each even number. I have the most with seven and Lee the least with four. The points are spent on raising the control dial’s stats. Power is your ability to hit enemies from different directions, Speed is how many moves and/or hits you get in a turn and Manoeuvrability is how many turns you can make in a turn.
We next get a weapon at random from a deck with 1, 2 or 3 damage.

My robot is Wangbot (apparently it was Razer). It has really good stats, but only deals one damage with a hammer I imagine to be one of those squeaky toy hammers. 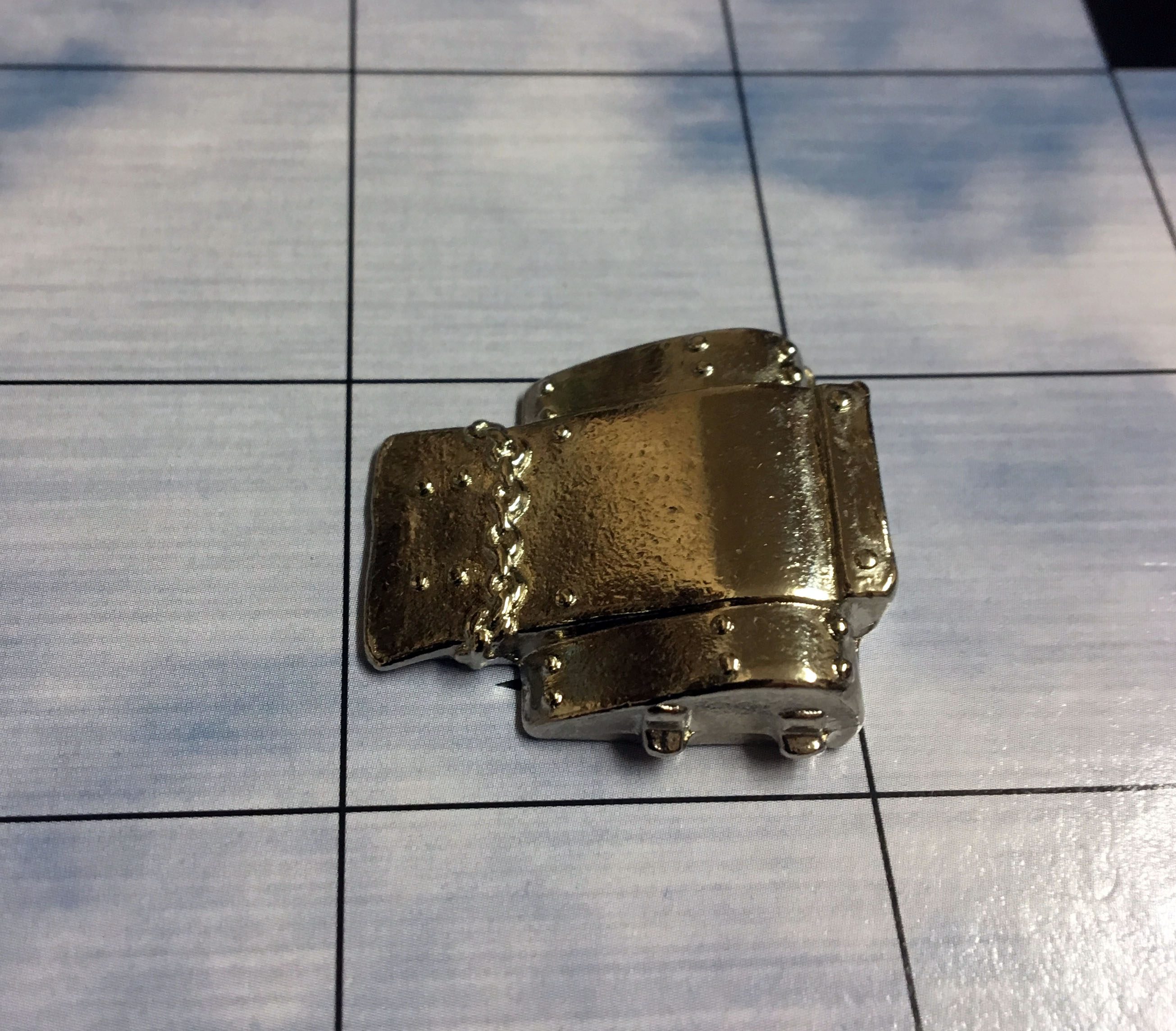 Emma has Dolphin, with stats almost comparable to mine and a two-damage flipper. 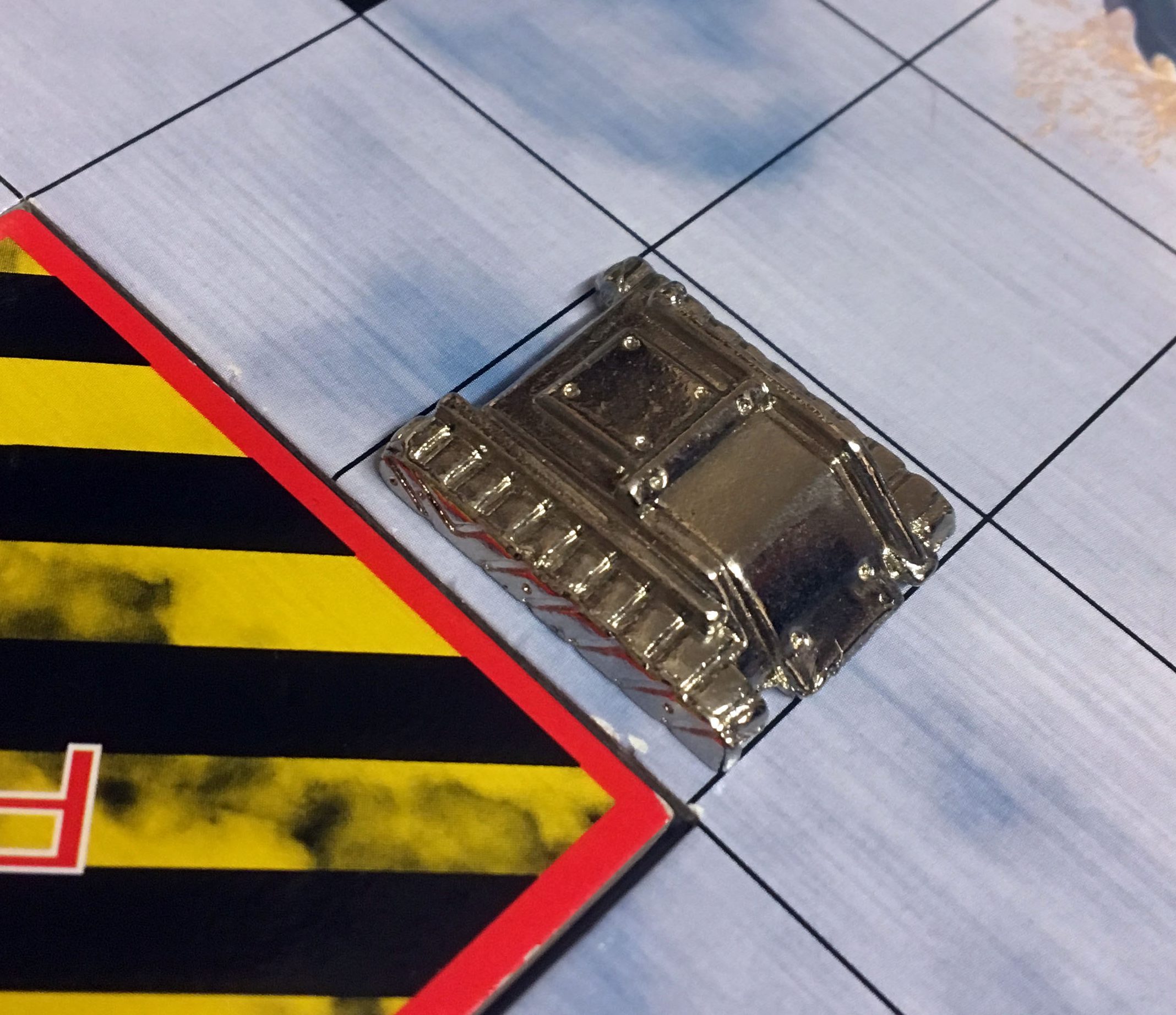 Lee has Paperweight, with lousy stats but a three-damage mace. Where does it fit the mace? Who knows. He’s a glass cannon who we want to avoid. 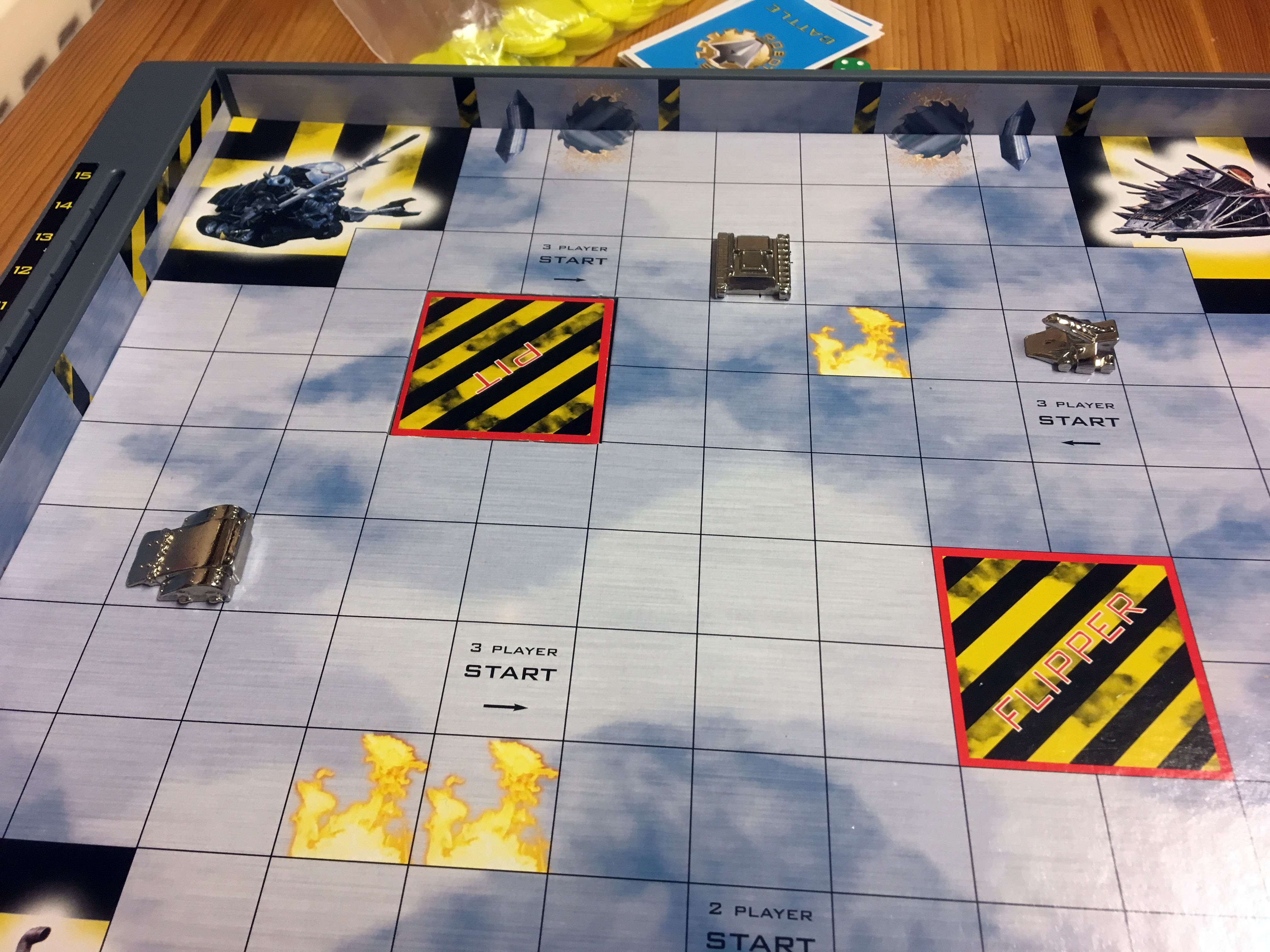 The map is a grid with several hazards, most of which deal five damage if you’re pushed onto them. There’s a pit which opens on turn five (out of fifteen) and the corners have the house robots, disappointingly just pictures of them. If you go in there, you have to suffer the House Robot die which has more misses than the hazards, but it also has an instant-kill side marked RIP. 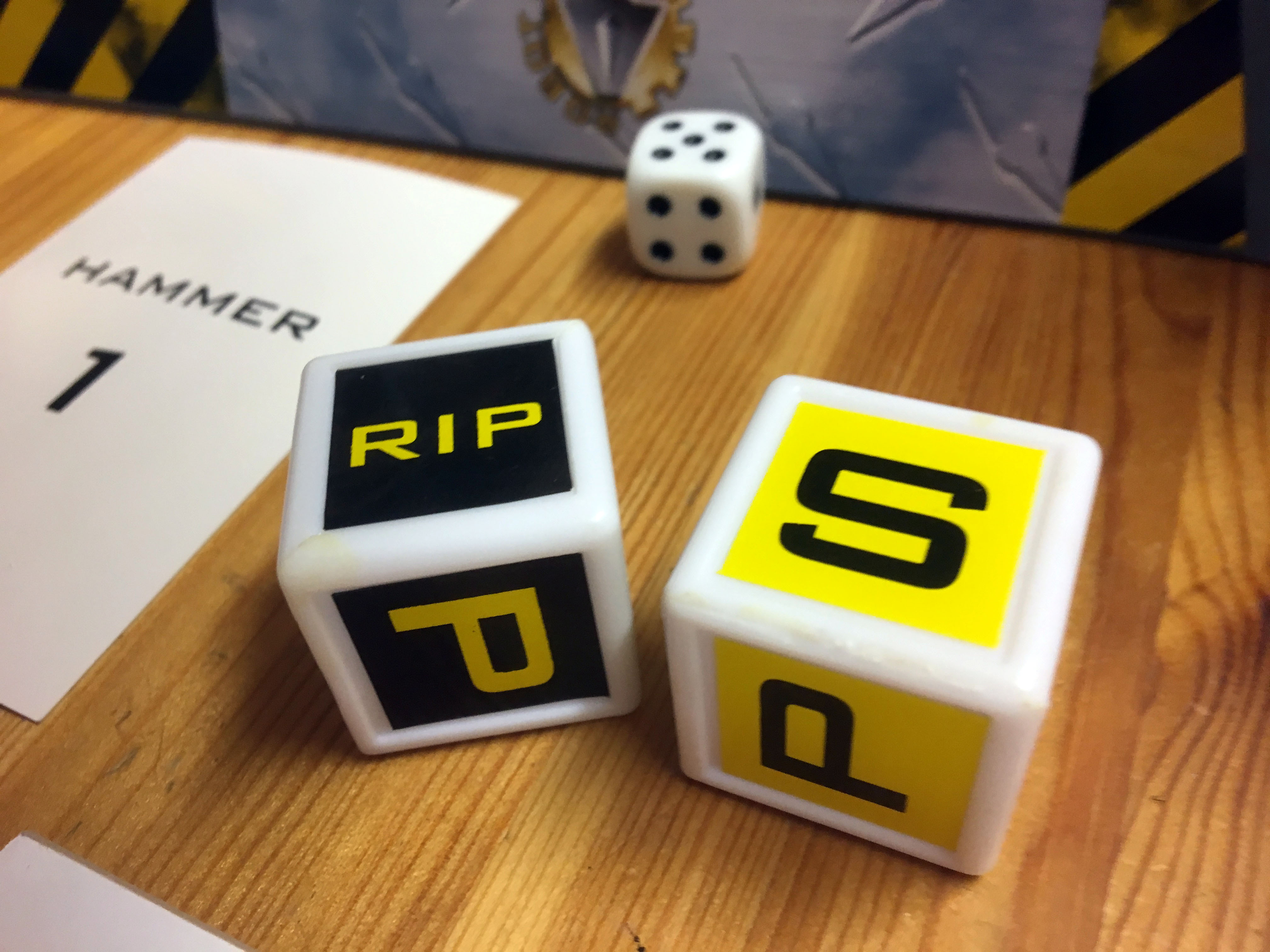 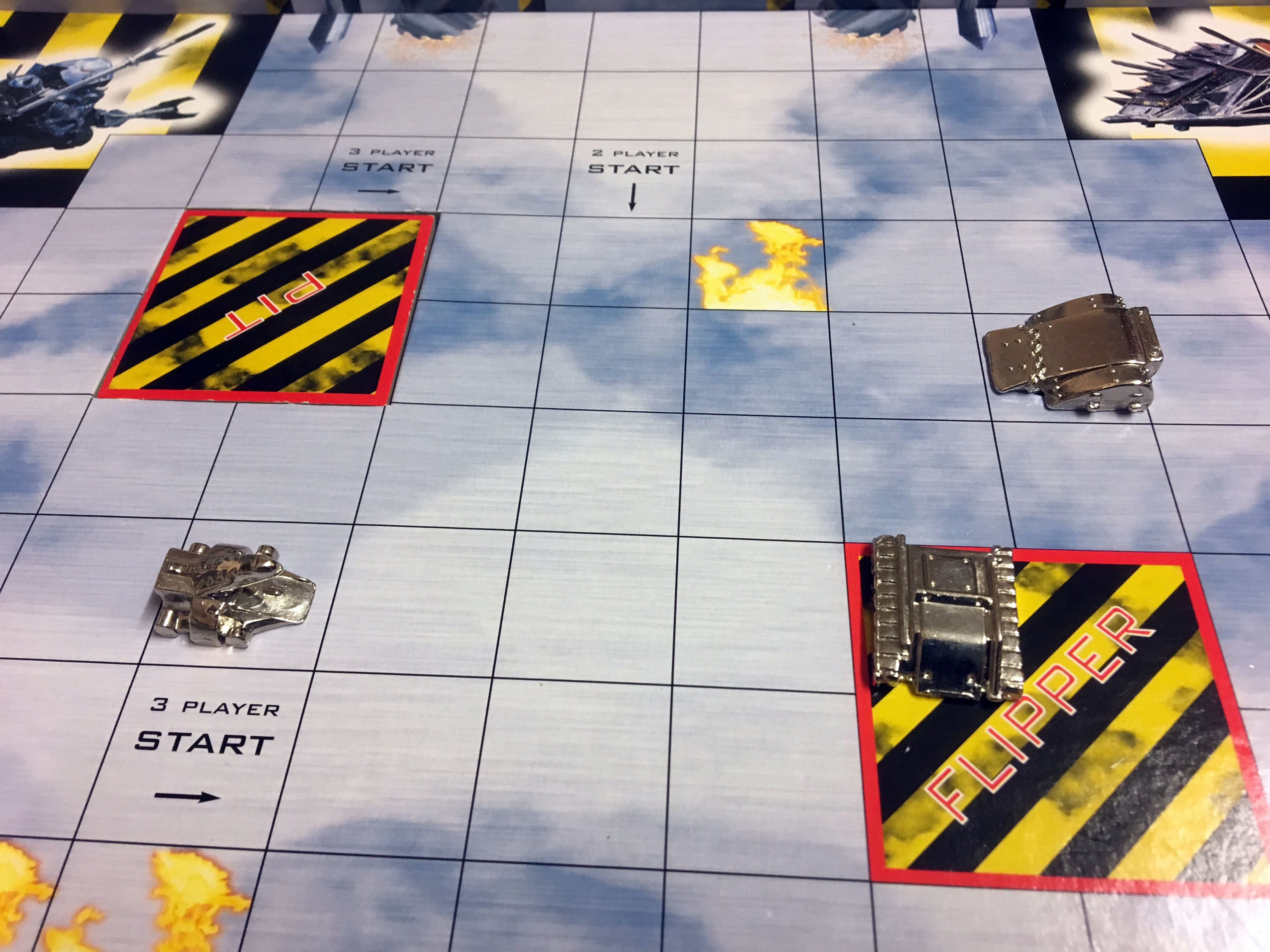 With more players, some won’t get to play, instead having to be the score monkeys as robots get smashed apart. A three player game means we all fight in one match, then the winners have one final battle.

Paperweight trundles forward, right where Wangbot can charge it into a giant flipper. Wangbot’s hammer is too puny to do real damage, so it’s limited to shoving people into traps. It gets away pretty quickly after Paperweight has to impair Manoeuvrability with a big “M” on the damage dice.

Dolphin gets into the action, hitting Paperweight while he’s down. Wangbot circles, unable to get a good angle to shove either into a trap. They all break away from each other, regrouping.

There’s a scorepad with dots for each robot and every fifth point prompts a roll of the damage dice. The resulting letter lowers a stat, possibly meaning that your robot can only target enemies front-on, or can’t rotate as well. The first robot to get immobilised ends the game. That or going to fifteen turns. 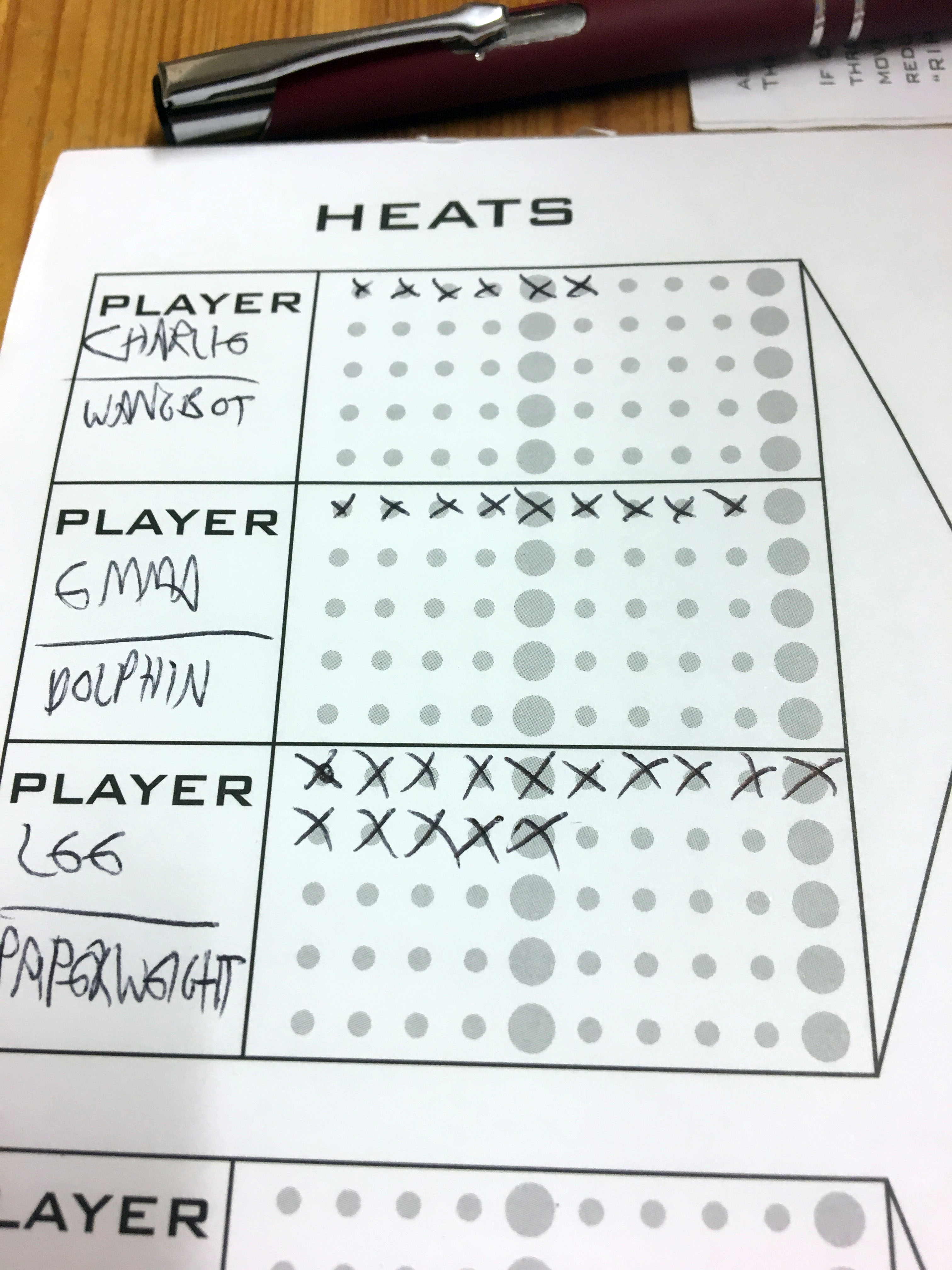 Smartarse that I am, I point out that we were all hiding at turn six and I had the least damage. I would win if we reached time-out. I do not follow this up by cleverly running away as they run towards me. Paperweight’s already slow and can only turn once. Dolphin’s the main threat, almost as fast, with two damage on her flipper.

We wheel around the now open pit, ending up in a conga line of death. Dolphin and Paperweight are face to face, neither willing to escape, smashing each other’s faces in constantly. The damage is limiting their ability to do anything other than keep up this lethal clinch. This feels like the show, as bits fall off and technology begins to fail. I run in, looking to make a bit of damage, too. Eventually, Lee’s Paperweight loses its last point of speed. It’s over at turn twelve. 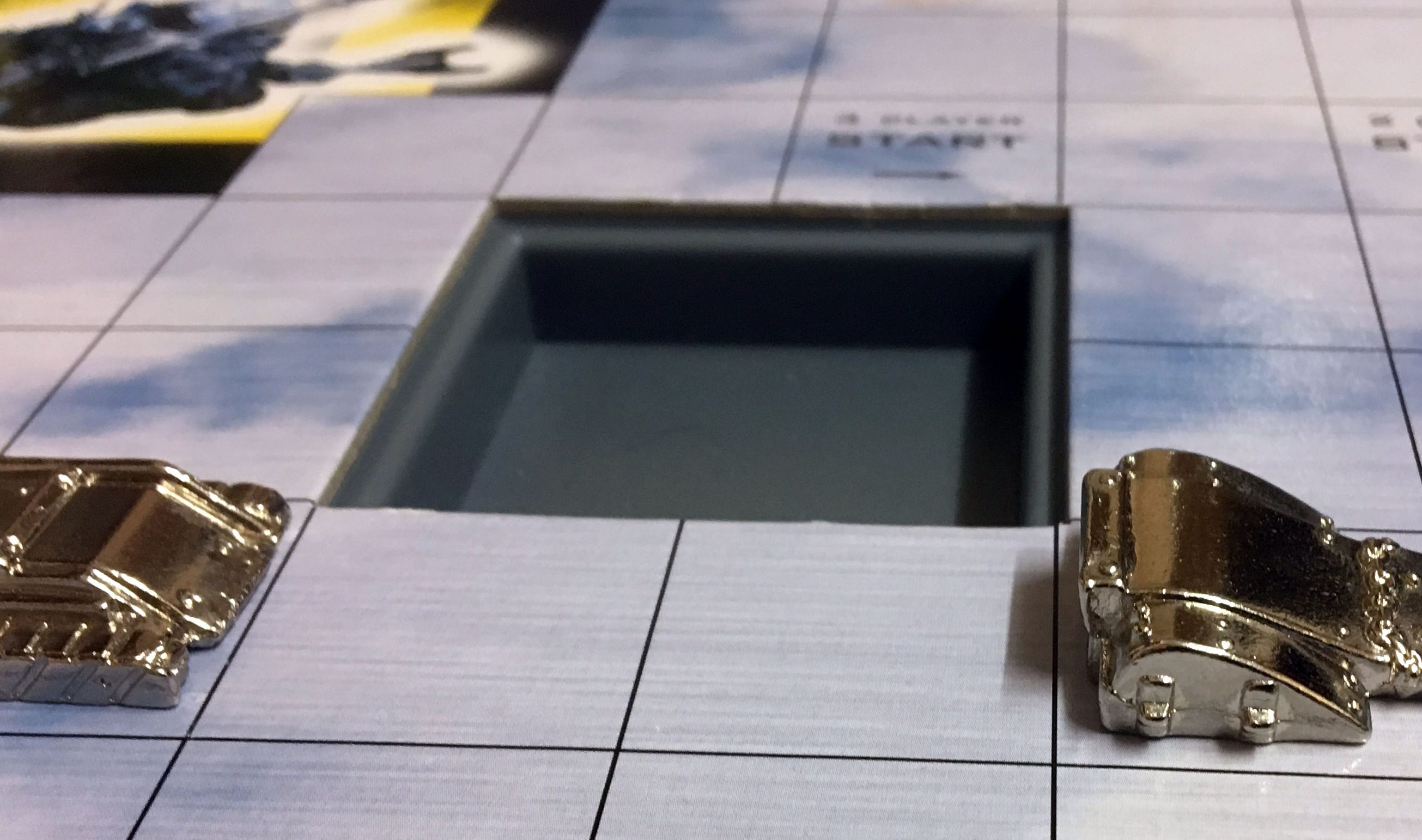 I’m victorious, but this is still Robot Wars: The Game. No one really won. Possibly Emma, who’s spent most of the game looking up robots from the show, trying to find out who ours were. Her’s was Chaos 2, Lee’s was probably Suicidal Tendencies.

We look at the score sheet. With three players there’s no semi-final, just the final battle between Emma and I. We look at the time and the rules stating that you rebuild your robot from scratch. Then we decide against having our second battle. 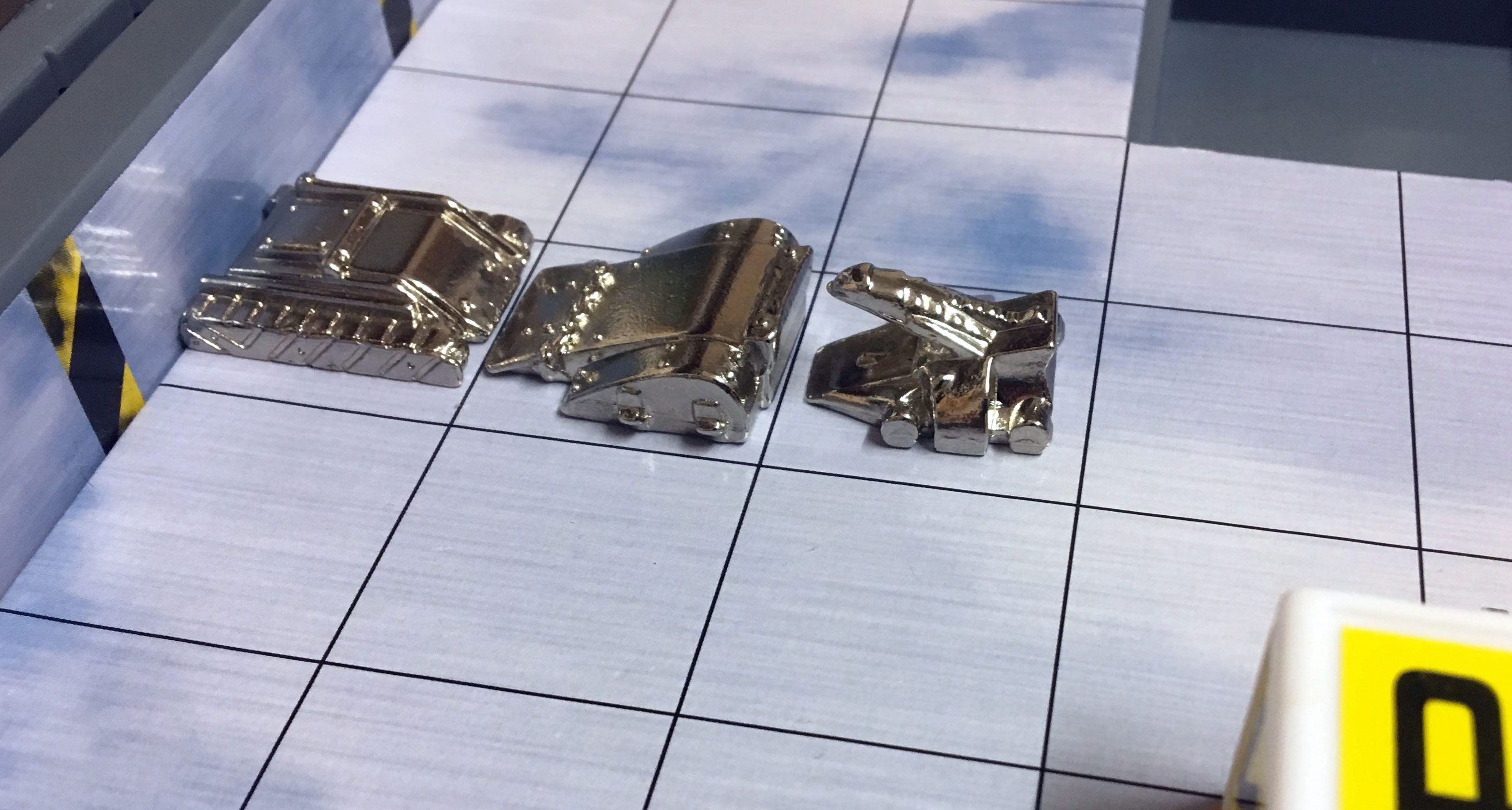 I expected Robot Wars to be a shit RoboRally, but it turned into a shit Spartacus. My least favourite part of Spartacus is the fight itself, but it’s short, brutal and underhanded tactics allow you to wreck everything even if you don’t have the best fighter. This could be a good start to a game, like a first draft. As it is, the game takes up too much space for something fairly uninteresting. Back to the charity shop with it!

Final Grade
This game is right in the middle of my charity shop licensed experiences. Better than Lost and 24, worse than Da Vinci Code and the reigning hero; the Ground Force card game. 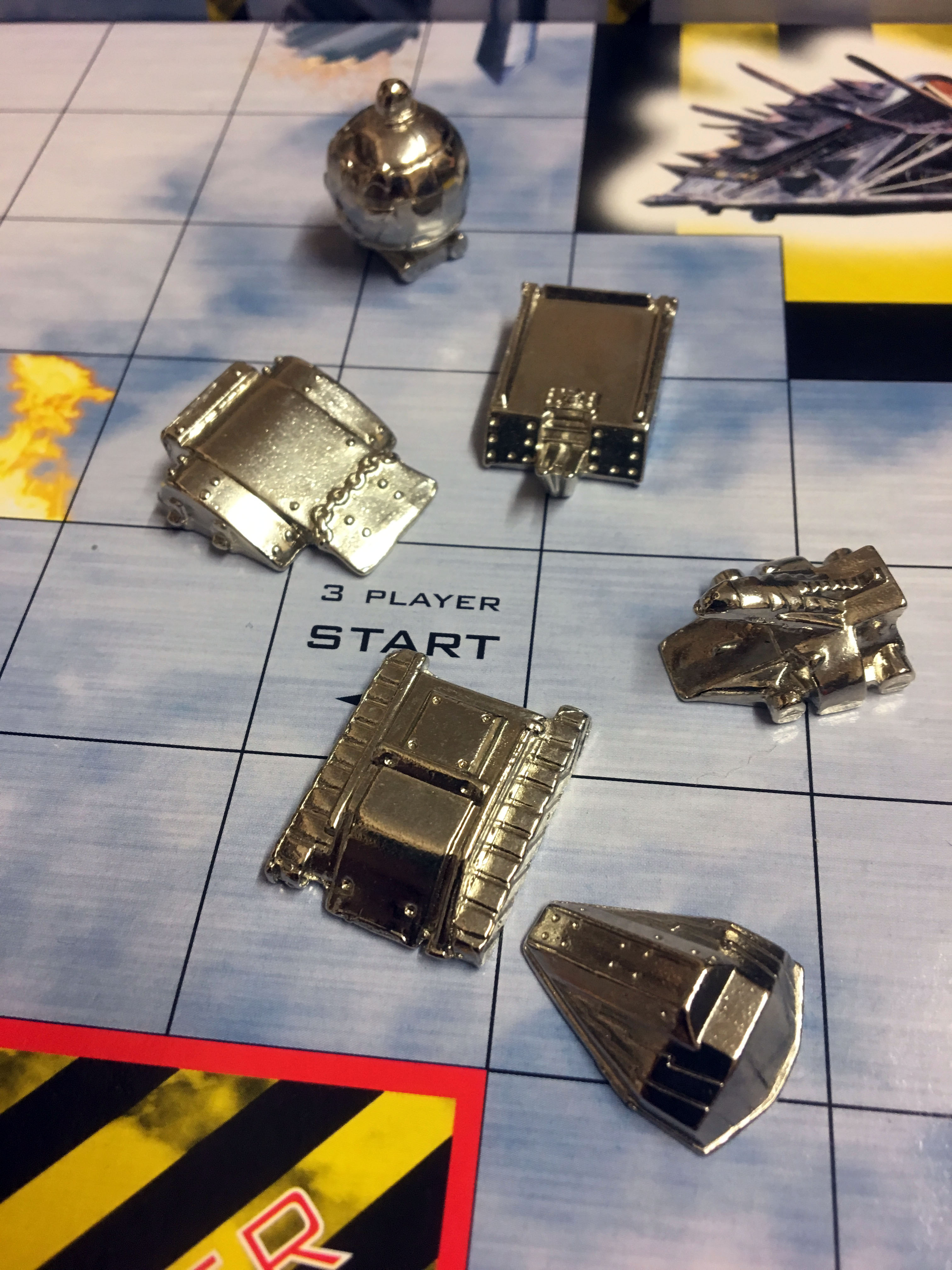