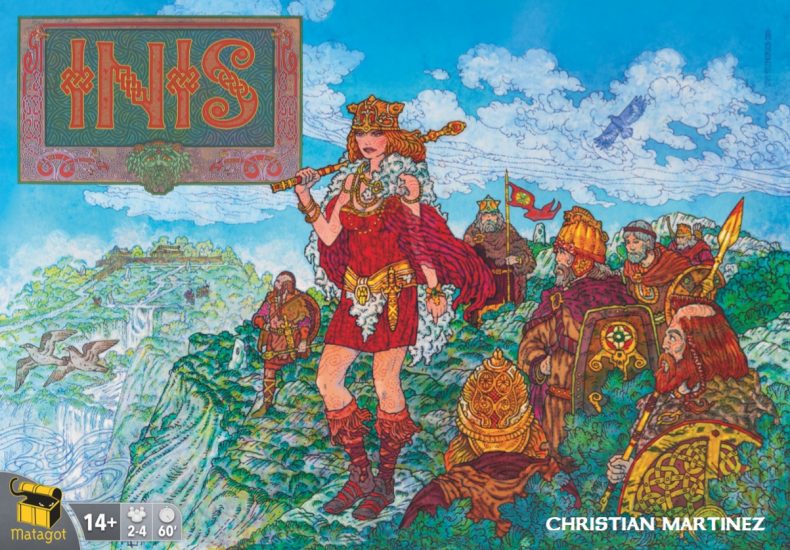 This one snuck up on me. I had seen it a few times in games shops I frequent (I’m not always about the bargain bin you know), but the cover never grabbed my attention. Possibly the lady in a weird hat or maybe the very bright colour choices. Quick history lesson folks the artist of this piece is Jim FitzPatrick most famous for creating the iconic Che Guevara poster from the 1960’s! So at AireCon, Luke from the Broken Meeple pulled a copy out of the game’s library and suggested we have a go. It was clear that my lack of interest up to that point had marked me as a fool.

In Inis players are the chieftains of the first people of Ireland, newly arrived and still to find their way across the land. The map is made up of a number of different regions, one for each player at first, as well as a capital building that is placed in one of these tiles. Players start by distributing their clans (each represented by a plastic warrior miniature) across these regions. Note that clans can co-exist alongside one another quite peacefully (at least at first).

At the start of each round, one player is declared Chieftain of the capital (or Brenn to use the correct term). This is determined by the player with the most clans in the capital’s region. Players may also be declared the chieftain of other regions by having the most clans there, which provides them with an advantage card to use during their subsequent turn.

Each turn starts with the Brenn flipping the Flock of Crow’s token, which indicates the direction of play for the turn (either clockwise or anti-clockwise around the table). Each player is dealt out a hand of Action cards the remainder are put to one side. Players choose one card to keep before passing the remainder to the next player. Players continue to draft cards in this fashion until all of them are distributed.

After the cards have been drafted, starting with the Brenn, players take their turns. Each player has three options; to pass and take no action; to take a Pretender token if they have met a win condition (more on this later), or to play a Season card. The phase lasts until every player consecutively agrees to pass – either because they want to, or because they have run out of cards. 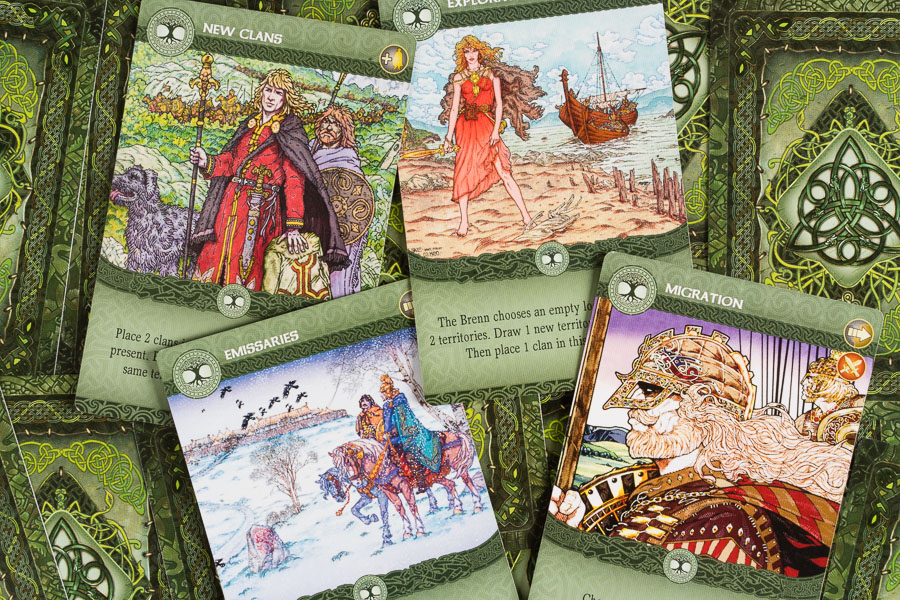 Each card in the game is marked with a Season or Triskele icon, which determines whether it can be played during a player’s turn (Season) or out of turn in response to another situation occurring (Triskele). The Seasons cards allow players to carry out a number of activities; anything from building a Sanctuary or Citadel; growing the number of clans; exploring the island, or moving into other territories. The other cards tend to be more of a ‘take that!’ style of event – cancelling or penalising players for taking actions.

When cards allow the movement of a clan into an area where other clans are, it is usually at this point clashes arise (although not always – again it is indicated by the card played). Players occupying the area can choose to protect one of their units by retreating to a citadel if there’s one in the region. The player that initiated the clash then makes a choice – they can attack forcing a player to either remove an unprotected clan or throw away a card from their hand; they can use a Triskele card or they can withdraw their forces to another bordering region where they have clans. The same choice is then given to the next player in turn with forces in the region. Clashes can be ended at any point, by all the players involved agreeing to do so. Sometimes war is not the best option.

Players can also receive another set of cards, Epic Tales when instructed. These represent Irish myths and legends – the influence of the gods and heroic individuals. They are used in the same way as Action cards, but will not be discarded at the end of the turn and redistributed.

Once all players have passed, all unused Action cards are returned ready to be redistributed. Then those players that have claimed a Pretender token during the turn need to see if that continue to have met the game’s win conditions.

Players win in one of three ways – by having clans in six different territories; by being the chieftain over territory where six other players clans are or by having clans in territories with a combined total of six sanctuaries in them. It is entirely possible for multiple players to achieve winning conditions at the end of the turn and have a Pretender token (no token, no win). If so the game carries out – there must always be an outright winner. Unless one of the people claiming the win is the Brenn who wins in the case of a tie (as you may have gathered, being the Brenn is a good thing). 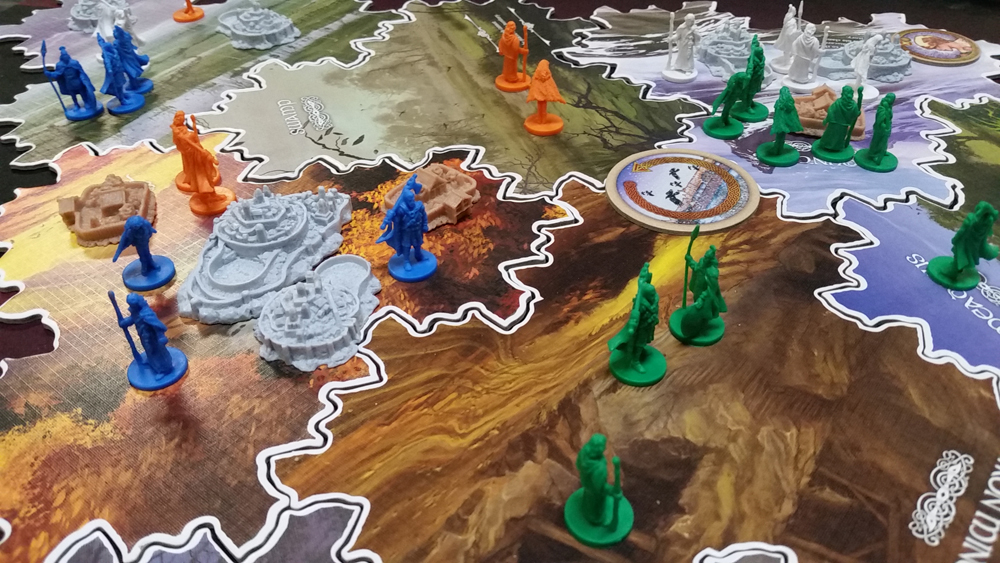 Inis a very distinctive visual look – the cards are bright and dynamic, with the art similar to the box cover. However, whilst I did not like the box art, it does work on a smaller scale in my mind. It brings to mind some of the classic 80s fantasy art or prog-rock album covers, which is a very good thing in my mind. The design of the playing pieces are good too – the regions are non-uniform, but fit together perfectly. The art of the various territories is not in keeping with the style of the rest of the box, with a more realistic landscape images across them. However, it is a smart choice to ensure that they do not overwhelm the senses. The plastic buildings are nice, as are the clan miniatures – all in all, it’s a very solid package.

I loved the strategy involved in the drafting phase as well. I have played precious few drafting games, my main experiences having come from Magic The Gathering deck drafts. Nonetheless, this felt fresh to me because of its implementation in an unfamiliar setting. I am not pretending that I got it right, but guessing who was holding which card or what the target of the next action might be was genuinely thrilling. The ability to pass over cards you have previously reserved leant itself to providing me with more tactical options. I could change up my plans on the fly, knowing the cards I had seen and the shape of the board. 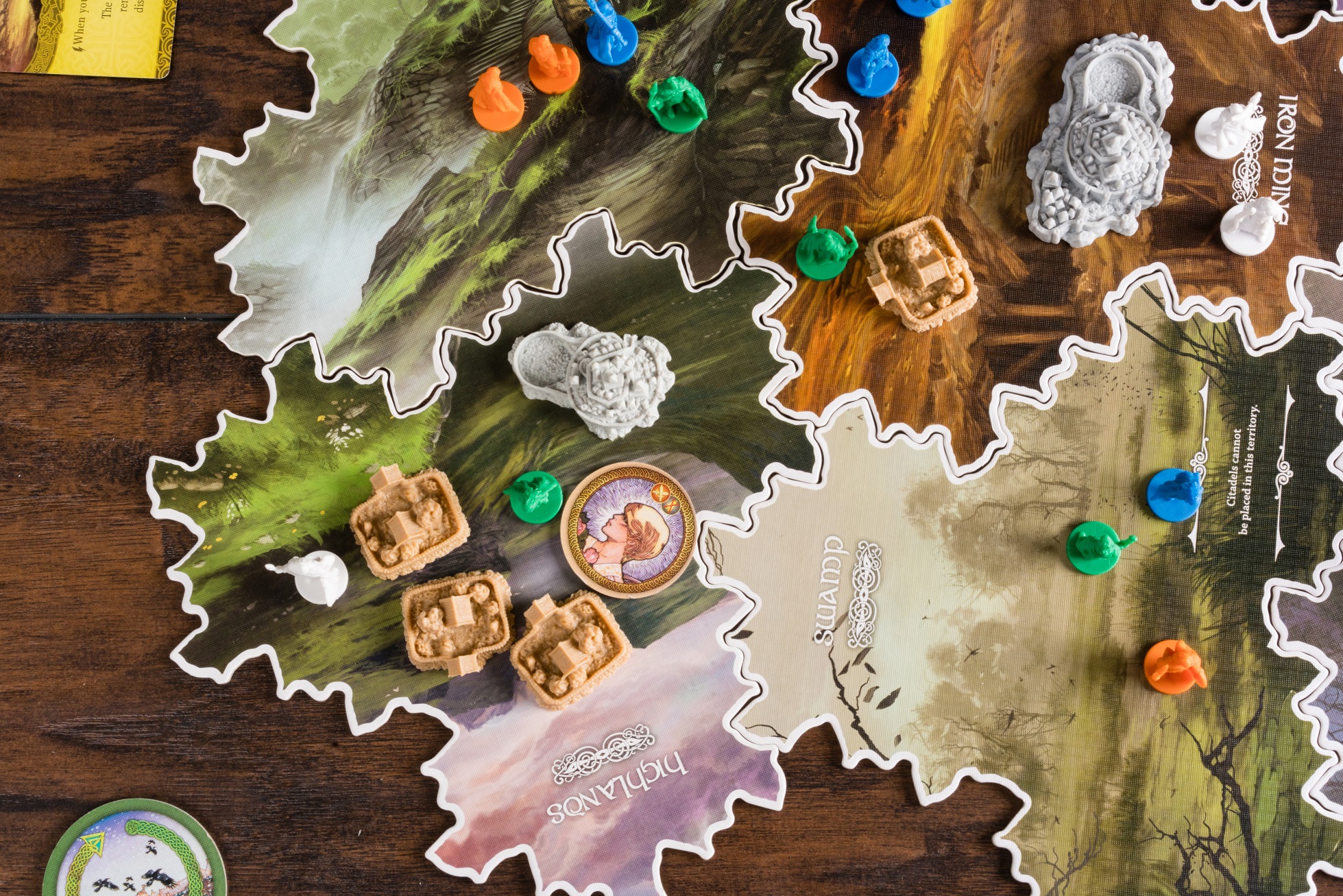 Whilst conflicts are a part of the game, the game also rewards playing the peacemaker. Knowing when you vastly superior forces are better served by offering the olive branch adds both to the complexity and the choices on offer. This is not a game about solely getting a warband together and smashing up your neighbours. If you are after a straight up wargame, you will be best suited with something else. Sweeping your opponent’s clans from the board actually removes one of the victory conditions open to you. It’s about careful manoeuvring and politicking – making sure that your other chieftains are not aware of your plans until the last possible minute and catching them off guard. A good poker face may be one of the most important things you bring to the table.

The Pretender tokens I am split upon. I like the fact that victory does not sneak up on you, where you may miss something important and the game is won by stealth. You never get the ‘oh – they won’ moment. But grabbing that token sticks a pretty massive bullseye on your back and ganging up on the leader is sure to follow. If you dislike that, you may find your game of Inis a bit unpleasant. In my first game though, knowing when to grab a token became very important. Watching someone make an early grab and the other players exhausting themselves to take them out of a winning position suddenly opened the door for a late Pretender grab by me.

One thing that has become very apparent to me after a few plays are that Inis is a very different beast the fewer people that are involved. That is not to say that you won’t enjoy yourself, but the game becomes truly great at 4 players.

For a larger group, Inis is one of the best ways to spend your time plotting the dominance of your fellow players. I’d happily put it on par with something like Cosmic Encounter, for how good it is. It does everything with a visual flair; through clever mechanics and in a duration that means the game rarely becomes a chore towards the end.

Go forge your own epic tale – you’ll be glad you did.