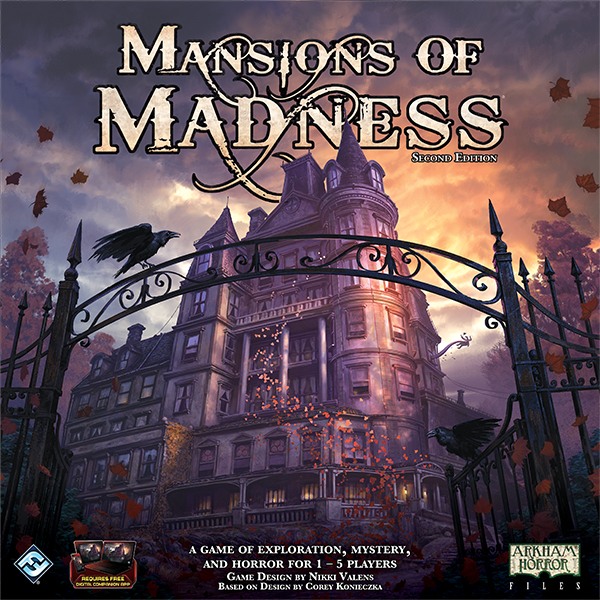 You’re both trapped in a small shack by the beach, a mob outside have sent out a crazed one of their number to draw you out. One of you is already hurt and trying to decode a puzzle while the other’s flailing wildly with a fire axe. Finally, the maniac drops to the floor, dead. You expect the mob to burst in or send out more enemies, but instead, they start to sing. In a way, it’s worse. You can’t predict their actions, you don’t know what they do. When the noise dies down, you check out of the door. They’re gone. You run. Maybe, if you’re lucky, you can get out of Innsmouth before they return. 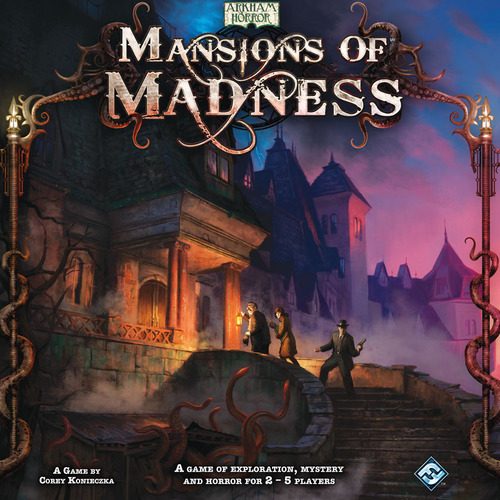 Mansions of Madness’ first edition was a fascinating board game. It had one player as the Keeper, driving one to four players insane as they ran around creepy old houses. You used miniatures to represent investigators and monsters alike. Stories had variable sections to allow replay-ability of each one. It was like Lovecraft crossed with Scooby Doo, especially with Ashcan Pete and his trusty dog, Duke. It didn’t see a lot of play in my group, though, given the setup was way too long and weighted heavily on the Keeper. In my group, the Keeper would often send away players with a copy of Love Letter or Coup to distract themselves with while the tiles and exploration cards were laid out. Then, multiple times in my experience, a single card placed wrongly would completely ruin the game. My first game, I placed the wrong clue card and made the game unwinnable for myself.

Okay, let’s soften the blows bit by bit. First of all, it’s backwards-compatible, so your miniatures and tiles from the first edition and its’ two expansions are still valid. Just tick that you’ve got them on the app, and you’ll see the contents it uses change. 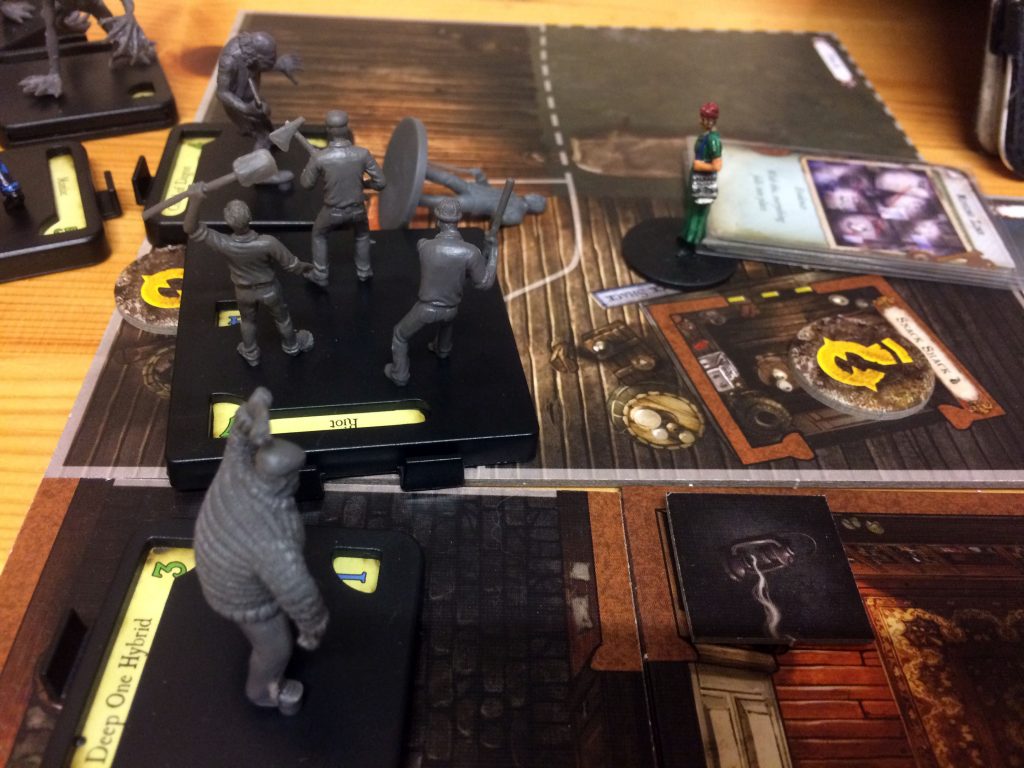 So what do you get? There’s a bunch of double-sided location tiles to make up the mansions, alleyways and strange towns you’ll wander around, eight investigators, a bunch of monsters including a riotous mob and the Star Spawn of Cthulhu, who looks like he’s having a good sneeze. There are tokens to represent curiosities around the board and NPCs, yes, there are NPCs to interact with in these adventures. Oh, and there are dice with funny symbols which are a real difference from the d10 in Mansions first edition and a surprisingly small but interesting bunch of cards. 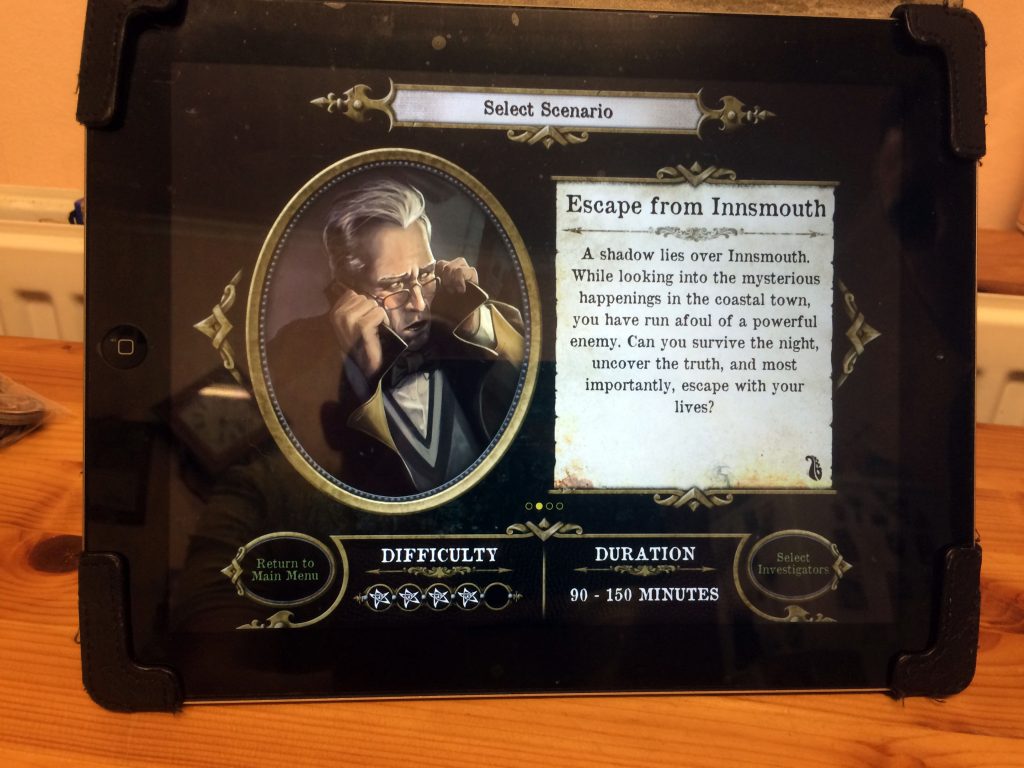 You’ll tell the app which of the four stories you’re doing and which investigators you’ll use. The app tells you the length and difficulty. The shortest is also the easiest, then there’s a really long but only slightly harder one, and the middle lengths belong to the most challenging scenarios. It’s probably fair that you don’t spend three hours on the adventure which will chew you up and spit you out so easily. Once you’ve got your adventure and have poured the game’s pieces out to the edges of the table, the app will tell you how to set things up. There are starting items to divvy out which are random each time and taken from an alphabetically-sorted item deck. Yeah, no shuffling of the item, key item, spell and condition decks, as the app will tell you what to take out and when. You listen to the backstory, lay out investigation and exploration tokens and then begin. 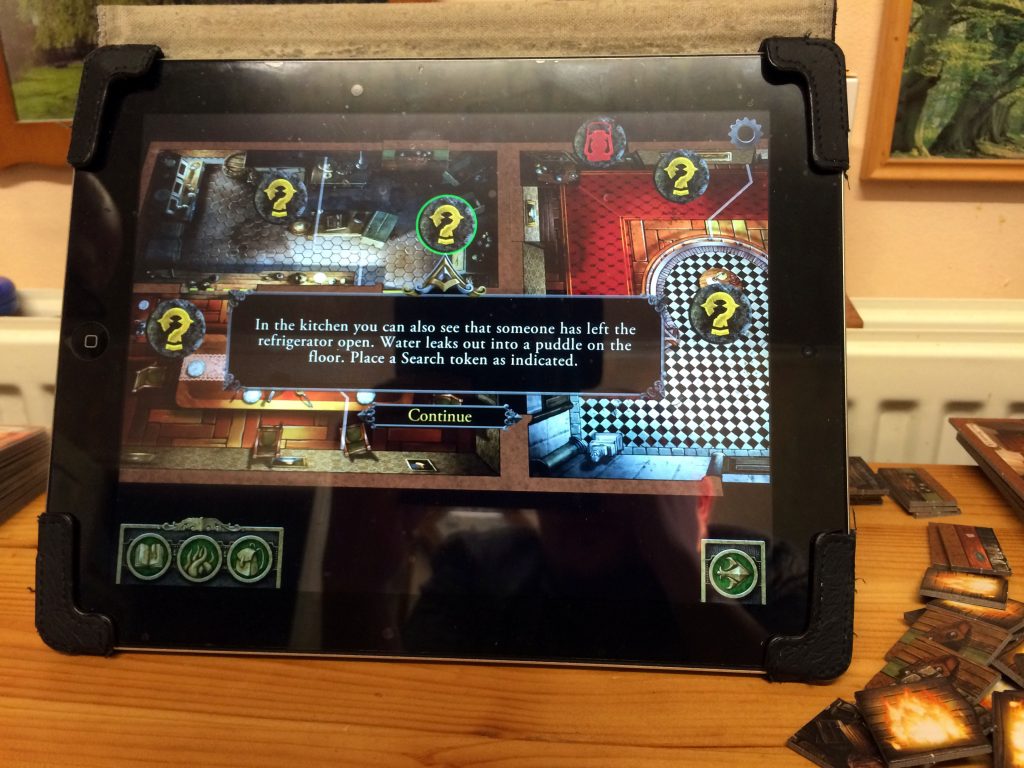 The app doesn’t dominate the game to an unpleasant level like I think many people feared. Your miniature’s movements and that of the monsters are only represented on the board. On your turn, you take a couple of actions which may involve tapping on the investigation or explore tokens in the app. The tokens tell you what you’re about to look at before you confirm so you might be staring at a strange painting, rifling through spilled letters on the floor or busting open an old cupboard. In the Mythos phase, you may suffer random effects like lights going out or a single player tripping up on a loose floorboard. Monsters may appear and then it’ll tell you where in the map they start, the behaviour of them and the effects of horror checks against them. Unlike the first edition, Horror checks only take place in the Mythos phase and only when you can see a monster. Kill a cultist before its’ turn, you won’t be affected by its’ weird chanting. The Horror checks, much like evasion and attacking monsters, is thematic to the type of monster. A deep one hybrid’s skin sloughs off, the maniac brutally slams his own head against the floor and smiles at you through eyes covered in his own blood. It’s often unsettling and rightfully so. 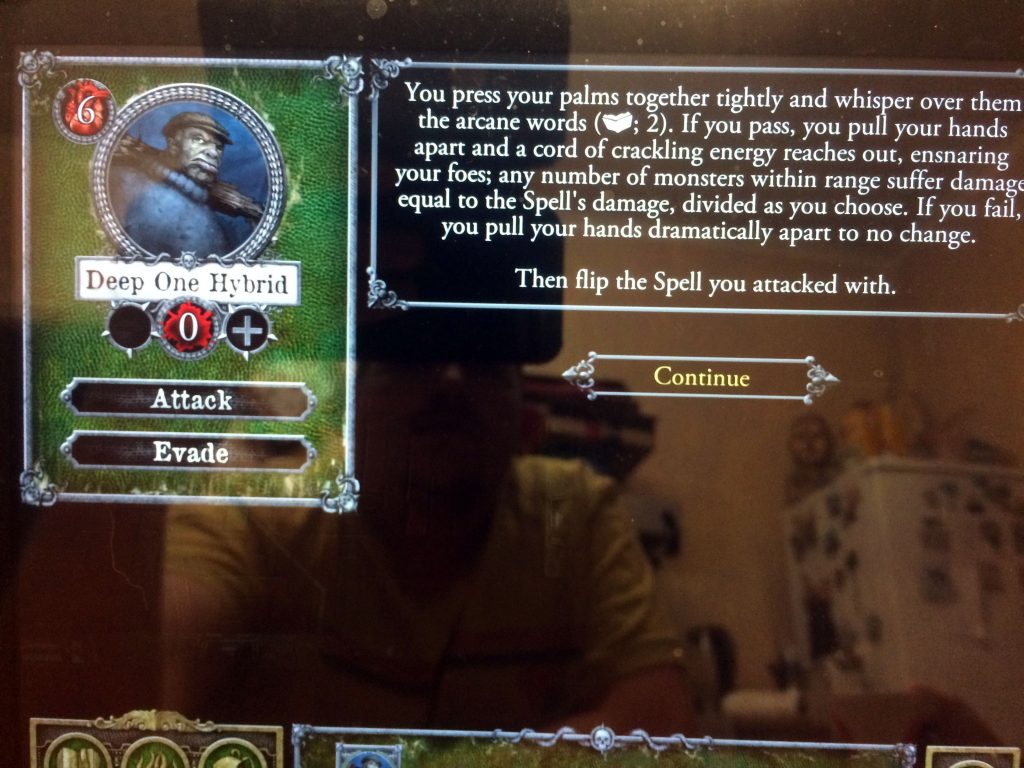 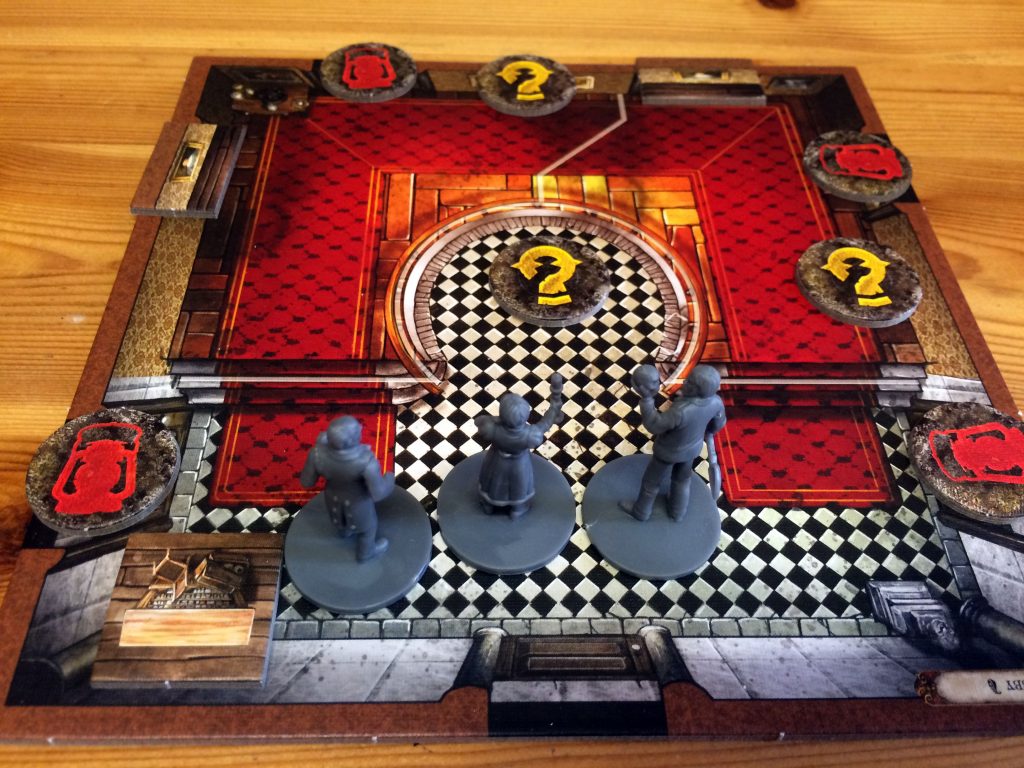 You’ll be rolling dice whenever a challenge pops up, whether it’s battering a cultist with your brass knuckles or talking a scared man into talking to you. To do this, you get a dice pool from your stat and any modifiers, then try to roll successes in the form of elder signs. You have clue symbols on the dice as well, which you can convert to successes by spending clue tokens and… hang on! This is X-Wing. This resolution mechanic is literally X-Wing. You’re not making contested rolls, but it’s all there. Also, the damage is from X-Wing as well. You get dealt damage or horror in the form of cards. Sometimes they’re face-down, but they may appear face-up and go off before flipping round. This means you might have a panic attack, calm down and an effect will flip it back up again. Your damage sticks with you. Luckily it’s a good mechanic and interestingly implemented here, or I’d worry about the growing homogeneity of Fantasy Flight’s games. You take damage equal to your health, and you’re wounded. Take it again and you’re dead, ending the game at the end of the turn. Sanity’s similar, but instead of a generic ‘wounded’ card, you get ‘insane’. The insanity cards are great. They change your win condition for the game, which you have to keep secret. Some are evident, like having to set fire to locations. Others like the one I drew in my second game require you to die just before the players win the game. You end up these wrecks limping along, triggered by all sorts of things as you try and save the world.

In my game with all the insanity, the app really shone. We were running away from Innsmouth, desperate to avoid a mob who kept vanishing, reappearing and doing weird things. The “riot” monster was something which literally could not have existed without the app. They would sing, maybe spit out maniacs, chase people down and drag them through the streets. It was horrible. Lee’s character was dragged across several tiles and died just as I caught sight of him. My character broke both her arms fighting a deep one, only to end up shouting curses at the mob as they ripped her apart. Truly a horrible end and one befitting a Lovecraftian character. 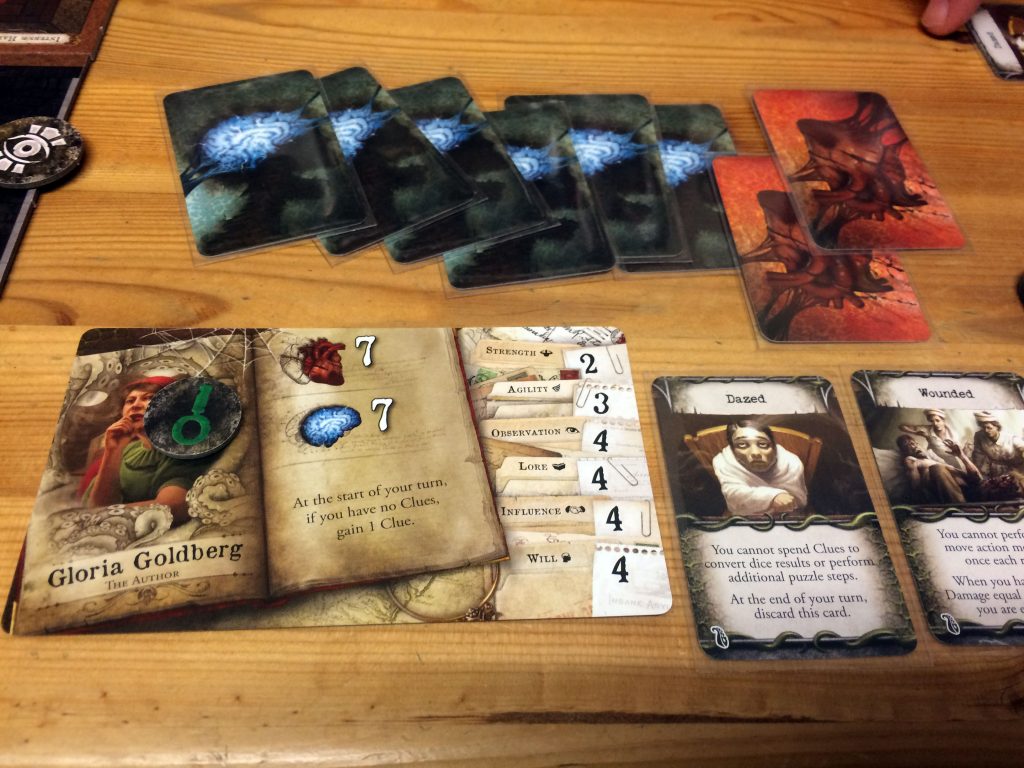 My most recent game had some good and bad moments to it. The bad was the change of goal with insanity. One of the group got pyromania and had to start setting fire to everything to win. After a couple of hours of an investigation, we would have to power through or effectively use up two investigators by having one stop another from wrecking the investigation. It didn’t help that we weren’t aware of all of the ramifications of giving an insane person an item, effectively buying her more time to burn everything down. The player reckoned she broke the game, but it was entirely her objective, it just felt like a lot of what we did was instantly undone by this card. It may be easier to deal with in shorter adventures, or a tactic may evolve about how to handle it. Luckily few insanity cards force entirely counter tactics to the investigation or at least if they do, it’s quick. The good however was the amazement at having to trash the board and build a new one. And then another one. It was incredible to see the evolution of the board as we went on. 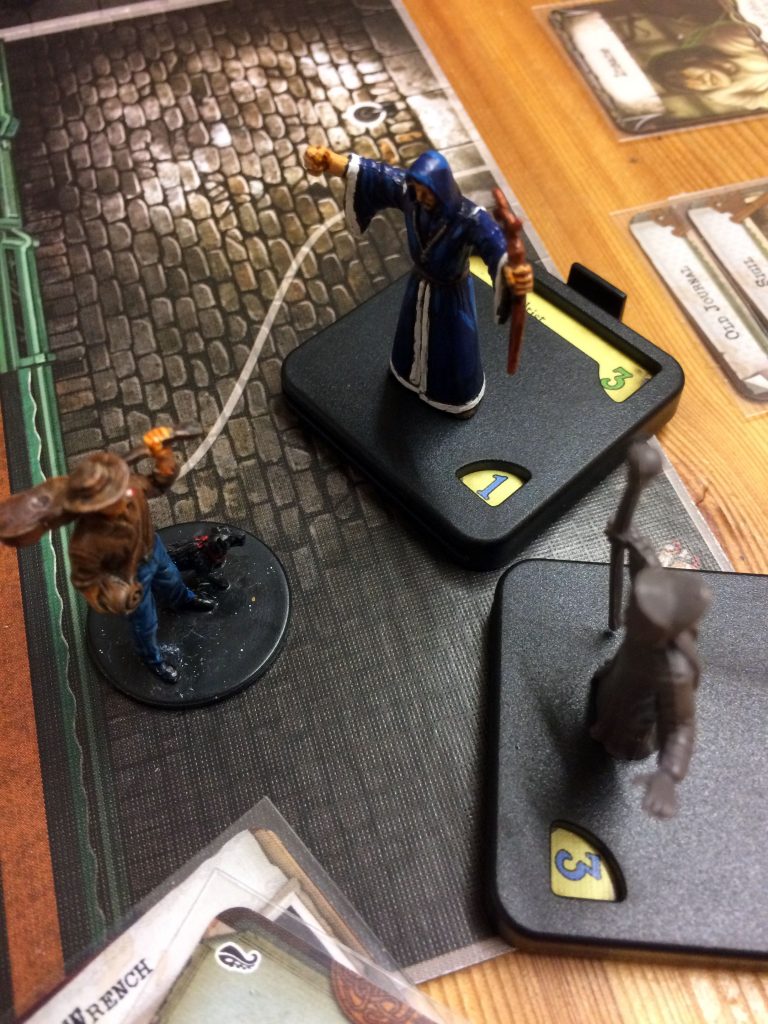 I’ve loved Descent: Road to Legend from what little I’ve played and despite the one pyromania issue, I’m really enjoying Mansions of Madness Second Edition. They’re two different flavours of similar-ish interfaces. The limited stories are expanded by various end goals, monsters and layouts of the buildings. Some use these variations more than others; Escape from Innsmouth needs to be pretty much the same layout with each playthrough. Later in the year tile & miniature sets will be released covering the first edition and its’ expansions, also bringing with them adventures which will make more use of them. It’ll be interesting to see how this will grow and evolve over time, but it’s already a great experience, albeit a pricey one.