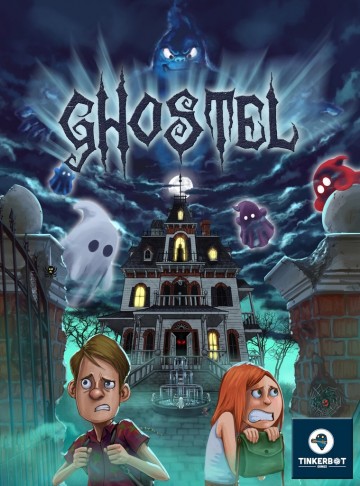 Easy teach and get going.
Great for family gatherings or games nights.

This is a frightfully cheerful addition to any gamers collection. Its manages to straddle that fine line between family friendly fair while still managing to have enough informed decisions to also make it a great candidate for sitting down for a more serious games night.
Well worth a look and throw in the great art and unique theme and you're onto a winner.

Did you ever sit and ponder, where did those cheeky ghost chappies from Pac-Man get too? Well, now we know. Tired of being Waka Waka Waka’d by that greedy yellow hockey puck they packed up their sheets and moved to Creepstone Manor to start henchghosting for some Tony Soprano type Don ghost called Spookie.

Ghostel is a light worker placement chockful of dice, lots of dice! Instantly assuring it a place on my “Hey look this has lotsa dice in it play it with me” list.
Players are competing to scare guests out of the newly reopened Manor/hotel complex to gain the respect of Don Spookie. To achieve this cheerfully horrid task, these Casper wannabees will utilise every terror-inducing trick that they know. 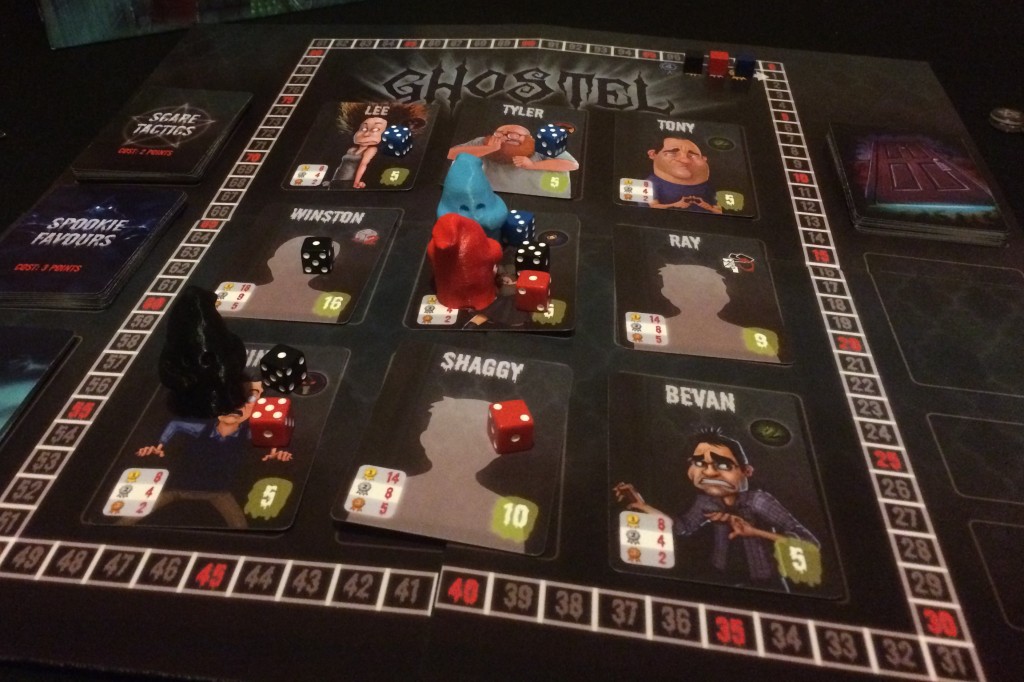 At the start of the game, the hotel is populated with nine guests in a three by three grid, each represented by a card featuring gloriously cartoony artwork alongside a couple of important stats. Each unsuspecting patron comes with a green courage number showing what level of terror is needed to send them shrieking from the hotel. This being something of a competition there’s also a score awarded by the big ghoul upstairs for who induced the best pant staining level of fear, some residents also suffer from phobias that can helpfully modify your fright score useful for encouraging those hardier souls to scarper.

The game plays out over two stages Night and Day so let’s pull back the tattered drapes and take a gander at how it all hangs together.

During the Night Phase, all ghosts start with three D6 Terror Dice essential tools in any haunting everyone rolls them and then the fun can begin. On a ghosts turn, they begin by placing their Spook on a guest, then pick a Terror Die representing the level of heebie-jeebies inflicted on the victim and play then continues around the table. On subsequent turns, you must move your spirit to another room dropping off another dollop of fear repeating this process until everyone has placed all their dice.

Then starting with the top left guest, the accumulated Terror score is calculated from all dice present and if this is above their courage score, they scarper leaving a messy bedspread for the maid and negative review on hotels.com. Whichever ghost had the highest score for that scare gets awarded top marks with the others fighting for the remaining points and the dice are removed. Then there is a calming down stage where any dice still on guests have their facing reduced by one representing the hapless fool having a bit of a chin wobble but sorting themselves out with a nice cup of tea.

We then move into the Day Phase, where all the ghosts head up to the clubhouse in the attic, and generally do whatever ghosts do when relaxing. But more importantly, they can spend their victory points on up to 2 upgrades.

There are three types of card that can be purchased. Let’s have a look what our deceased little buddies can be investing in. Beneath bed, No.1 are the Terror Bonuses costing 3 points these add a permanent shiny upgrade to your Spectre. Either replacing a D6 with a D8 essentially turning them from bumbling plate rattler to full on face tearing ectoplasmic spewing force to be reckoned with, or adding addition dice to your spook pool significantly increasing your chances of rolling those big scores.

Inside bedpan No.2, are the Spookie Favours costing 2. Yep show the Ghost Don some respect and get some instant tricks to aid in your shenanigans. Block other ghosts with hastily erected ghost proof insulation or the ability to squeeze through these barriers and various other boosts to your dice or assorted one hit modifiers.

Inside Bed Spread No.3 are the Scare Tactics for 2 points. These all focus on the phobias residing on the guest cards. Essentially your spook has attended some day classes on spooking 101 and knows exactly what’s going to put the willies up those hard to shift humans. When used these double the Terror Dice score you played.

Then the hotel is repopulated and we do the time warp again. When the guest deck is exhausted, it’s game over and, whoever, has the highest score is crowned spookiest spook and the losers will have to dry clean his sheet for the remainder of the afterlife. 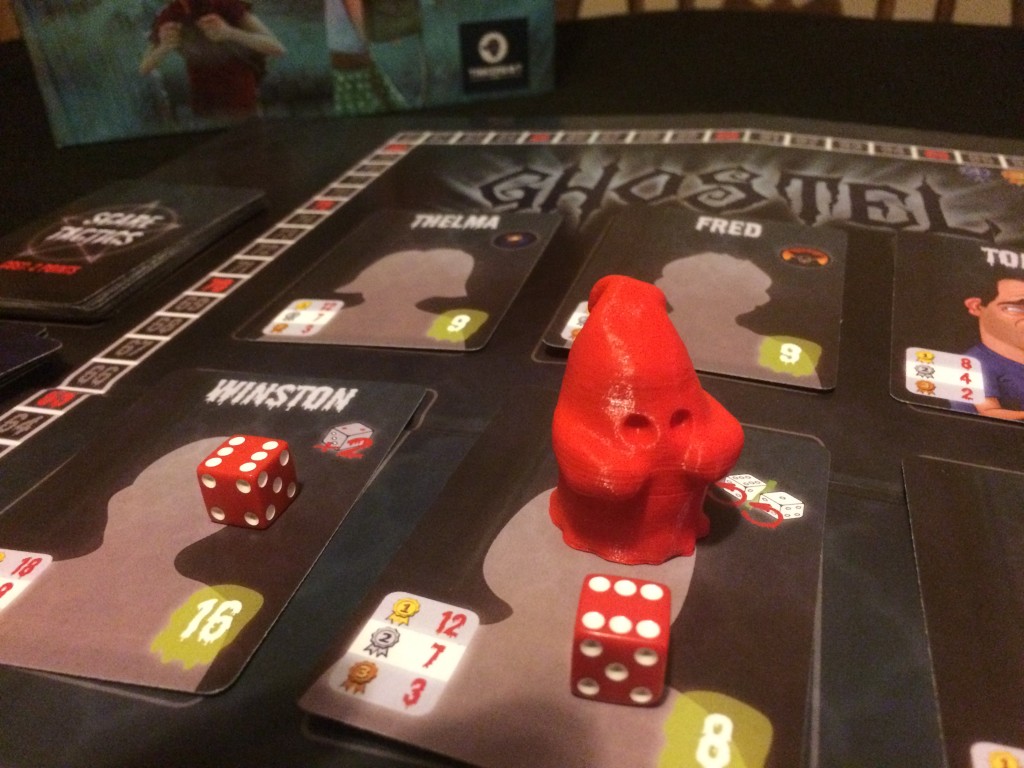 So that’s Ghostel. This is a cheeky little dollop of fun it cleverly manages to straddle that fine line between family friendly rules light fare while still offering that sweet spot of a deeper strategic play that’s just as satisfying to us crusty old gamers. Once you dig in there are a goodly amount of emergent tactics to get your teeth into. The mechanics dovetail seamlessly with the thematics enriching the experience and never cluttering up the fun, the calm down rule is a lovely little touch allowing for you to carpet bomb a bunch of hardier guests and potential hijack scores made by the others in later turns.

The victory points as a currency add a bunch of cheeky tactics and balancing spending on those upgrades while keeping an eye on your score track becomes almost a separate metagame. It’s a smart mix of catch up mechanic and self-balancing and some of our games came down to the wire with victories snatched by some daring spends to hit those essential modifiers and reap the big points in the following rounds. Or you could just blow your points to drop you down the rankings forcing somebody else into pole position, it’s the game equivalent of slamming on the brakes and doing some fancy driving and leaving the bemused pursuer blinking in a dust cloud. 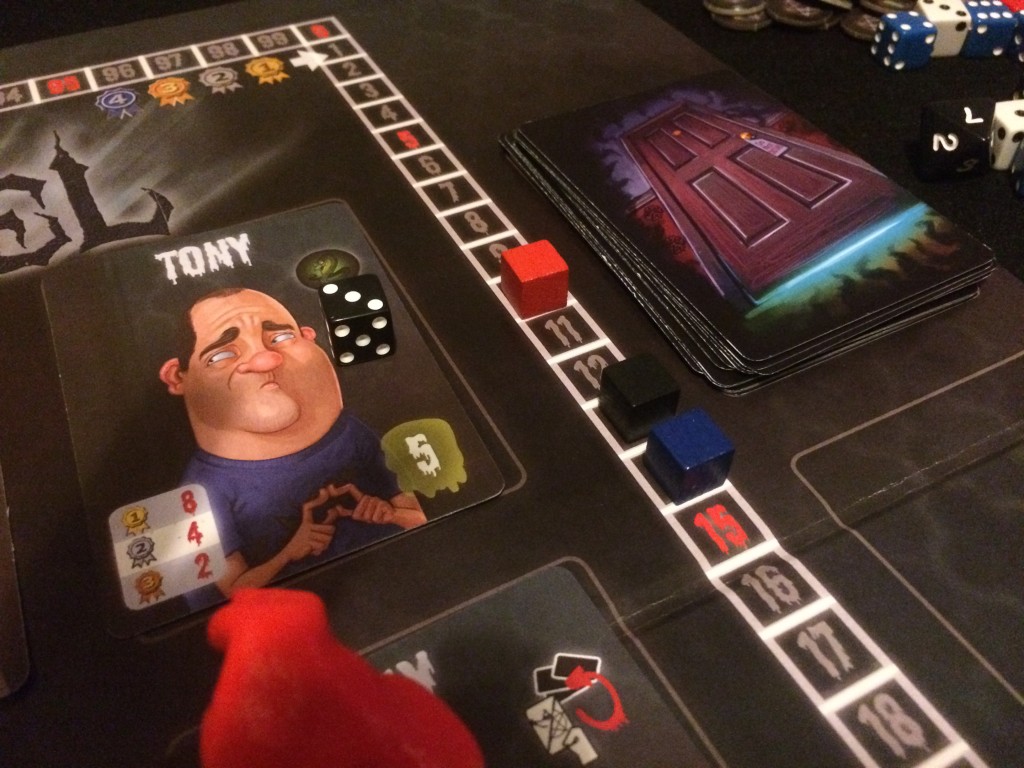 It’s this so simple but brilliant bit of design that really gives this game that wallop it needed, turn order informs all your decisions, this gives you control over that and potentially your rivals. I was always a fan of the design in games such as Fresco where you chose when you got up the next day that then dictated your turn order and bonuses, this is essentially the same mechanic but now comes loaded with subtle nuances of push your luck, take that and desperation.

In addition to all of that fun, some of the guests also have special abilities that are triggered when dice or ghosts are placed on them, anything from forcing re-rolls or removing cards from players hands to adding additional dice. Again adding another subtle layer of tactics to consider when you’re out spooking it up. 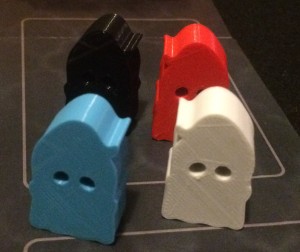 My review is based off a pre-production copy supplied by Tinkerbot Games which aside from not having all the card art completed looked incredible, so it can only get better. The game is hitting Kickstarter very soon and there’s a damn fine reason for you to get involved. You see those cool little 3D ghosts I have in the pictures, well they don’t come as standard and will be offered as a stretch goal, the Geeples?? that will be in the game are great, but you know you want those ghosts right?