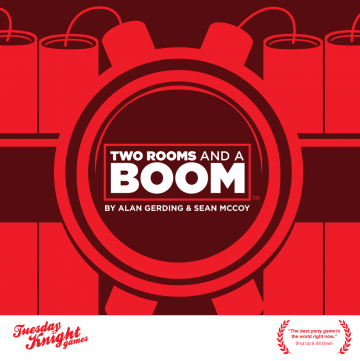 Well the cards can now survive an actual suicide bomber, so that's a plus right?

It was and is still a great game. It really only works with large groups. And if or when the day comes that you can pick it up from a store shelf, just give a moments thought for us poor crazy fools that went along for the ride.

So cast your mind back a couple of years, Love Letter hits the party/micro game scene like a disco inferno and is still punching its weight today. Two Rooms was also something of a party darling riding high on a Golden Geek best PNP nomination itself bringing a high concept elevator pitch dream come true style of game to gatherings worldwide.

The brainchild of Alan Gerding and Sean McCoy they founded Tuesday Night Games off the back of its popularity.
If you don’t know how the game works then for you back there in the cheap seats here, we go.

Catering to groups of six and up, the bigger, the better, like cells in a petri dish they split into two teams the Reds and Blues and then two rooms. One of the Red Team is a sneaky terrorist and somewhere in the Blues is the president, everyone gets shuffled up and split between the rooms. What follows is one part cocktail party and two parts surreal game of blind man’s bluff.
After mingling the leader of each room picks one person to exchange with the neighboring team. This process repeats twice more and then in the finally round we find out where the bomber and the president ended up. If they share a room, then the Reds win, in a maybe not so cool suicide bomb victory, or the President hot foots it to his helipad and is away.

And That’s it. Short, sharp, simple and riotous fun in big groups it successfully transcends gamer barriers from tabletop enthusiasts to a family gathering. This thing has some serious legs and has rightly acquired accolades and high praise from many luminaries of the industry.

The praise was justified, and when they announced the obvious choice to kickstart the game then it was a no brainer, they had my money as soon as it was announced.

And that should be the end of it, well it is of my review. But despite my love for the game that sweet blossoming romance has been tainted. But it’s a card game you cry, what possibly can go wrong with printing a simple card game? Well, take a seat prepare a beverage and I shall begin.

24 September 2013. And in now what seems a precursor of the dumb luck, mismanagement and naivety of the creators the launch is delayed. You see prior to the actual game they ran a little Kickstarter to fund a documentary “Boom or Doom” that would chart their misadventures leading to the release of the game. The problem was that KS won’t allow first-time creators to run two projects at the same time, so before they were even off and running everything was derailing in a catch 22 multiple pile up.

October 29, 2013. The project finally launches and funds in hours. As the days hurtle by, it ticks off stretch goals with alarming regularity. More and more cards are shoveled into the box; now the box has a box. We didn’t stop to think what any of this might be doing to the production schedule; these guys are professionals right? I mean they must have already thought about this stuff…

November 28, 2013. This is the moment where the project receives its gut shot. A lingering wound that will slowly result in the victim bleeding out in a very public and messy way. $85,000 was the magic number that would see the games cards being upgraded to plastic.
Alan proudly proclaimed the samples resilient having survived a “crumple test” balling them into fists they would bounce back into life. This would soon become a metaphor for the circus to come.

“We count ourselves as a couple of the luckiest guys in the world. We’re tightening the laces on our running shoes, and soon we’ll be off to the races getting this game to print! ”
Alan Gerding Nov 30, 2013

Everyone settles back and sets a clock for the June 2014 release date. But already the dark clouds are starting to form.

June 3, 2014. The update many backers had already feared hits. Due to the many stretch goals and upgraded components the game will be delayed until November. In an attempt at vague transparency, it’s acknowledged the project was never going to hit its original dates. The printers had informed them of this and now with the villagers at the door pitchforks within easy reach and torches prepped for ignition they do the honest and forthright thing and fess up. In keeping with the optimistic approach so far they announce a November date, a date that will only be hit if no further delays or issues occur. I’ll leave that hanging there for a moment.

November 11, 2014. Meltdown
Punch drunk and reeling from undoubtedly much behind the scenes turmoil and painfully sober early mornings an update hits. The long dreaded but fully expected further delay strikes. The game will now be out in April. With all the art for the 110 cards being produced in-house without the aid of an artist production delays have blown the wheels off the wagon. Nobodys saying it, but we suspect this is the tip of the ice berg. About now I strongly began to suspect that I’m never going to see the game, I shrug and write off the pledge as missing in action. The world turns.

Holy crap on a crap cracker, why the crap is this taking so long!?!
Alan Gerding Nov 2014

January 27, 2014. A year and half in, there’s some justifiable gnashing of teeth from backers as to how it is a simple card game can take a year and a half to print. The day is foreshadowed by a printing revelation but assurances that they built the possibilities of delay into the April release date. Somebody robs Seans car taking his convention box, after a year and a half of waiting a carjacker is the only person to see anything close to fulfillment on this project. And I suspect the bastard never even pledged. 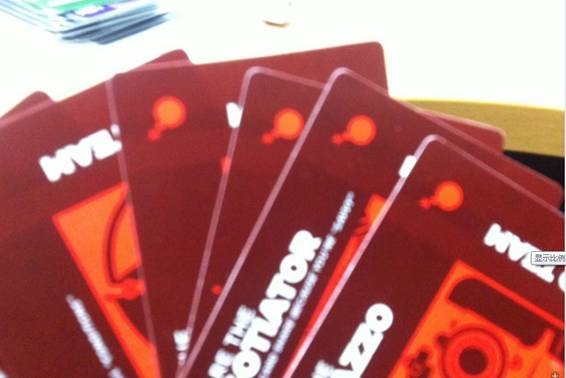 February 10, 2015. In what should have been a dash to the finish line instead turns into a stumbling clusterfuck of epic proportions.
In short the colours are wrong on the cards, and many have defects or other issues, what schedule there was takes itself outside and does the decent thing and downs a bottle of bourbon before sucking on a shotgun barrel.

“So what did we learn this week? We really didn’t know how to estimate release dates. ”
Alan Gerding Feb 2015

February 25, 2015. Finally the first transparency in this whole project, unfortunately, it’s the cards. Yep in you couldn’t make it up if you tried, the cards for a hidden role game are see through. The audible slap from 3,863 facepalms are heard as far as Pluto. Despite Alan’s claims that this will not delay the project further, nobody is drinking that Kool-Aid. 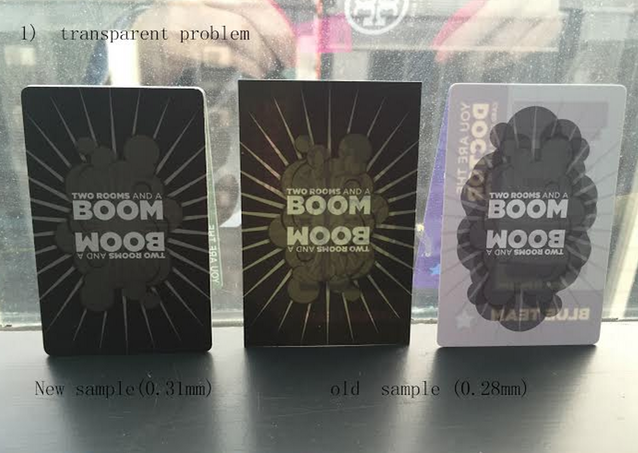 March 25, 2015. Following a flurry of updates involving changes to the card colors and backs resulting in further issues, Surprise! Sean leaves for China. The official statement is he’s heading to the factory to oversee the final stages of the production and gently shepherd it to completion. Most presume he’s fleeing the country fearing for his life.

April 22, 2015. Long story short, it’s delayed again. Yep going to be August. (by this point even Alan has given up trying to inject any zany into updates) The project’s comments section turns into a feeding frenzy with backers turning on each other. Refunds are called for, others offer them, I personally started to get more entertainment from observing the collapse of this small microcosm of civilization then I was getting from the game.

August 4, 2015. Well, the game finally ships, copies start to turn up in the States. My confidence drains following murmurs of damaged cards, poor print issues, and a really heavy box. It finally manages to appear at Gen Con with actual copies sold. The game exists (this warms me mildly).

Which brings us to this soggy August afternoon. As I sit writing, I still don’t have my copy of the game. There are assurances that the European copies will be hitting doormats this coming Friday. Well, I guess we’ll have to wait and see.

So what has all of this taught us, frankly who knows. I do belive that Alan and Sean started this project with a super hot product and all the enthusiasm in the world. Now two years later, things have moved on. The game is still very good, it’s just been left behind with the times, faster leaner and meaner efforts have come and gone. I do have a lingering respect for them, they did soldier on, the product has been printed its out there, they didn’t welch.
But it does highlight what a rabbit hole Kickstarter is, and the danger of chasing that stretch goal funding. This is a text book example of how not to do it. And at the end of the day it has taken two years to produce something that essential I made at home with a couple of sheets of A4 and a handful of sleeves, something that despite its crude construction has not yet disintegrated.

If I ever receive my copy, it’ll be with an air of mild dissatisfaction. The experience has tainted what was a beautiful affair, now we are like damaged ex-lovers casting unrequited remorseful looks at each other. Maybe someday we can learn to love again but for the time being it’s all too painful.

If you want to try the game then just head HERE and print yourself a set. Its quick easy and you might just have some fun along the way.

Unfortunately, I never backed the documentary. If it ever sees’s the light of day, and they can be truthful with it, I suspect it might be a damned good watch maybe even rival the disaster movie output of Irwin Allen.

“Its all kinda hilarious when you think about it!”
Alan Gerding Sept 24, 2013