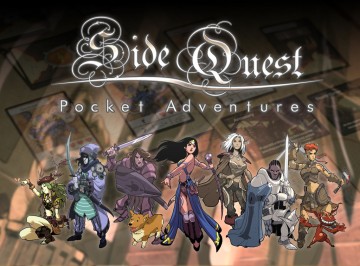 The dungeon crawling card game genre has proved popular of late the excellent Welcome to the Dungeon and riotous Cutthroat Caverns both spring to mind. They’ve proved hugely successful by each having a great hook. Welcome is a silly push your luck filler whereas Cutthroat is all about screwage of your fellow dungeon companions. These are games that have harnessed a theme to its particular cart and galloped off with it to success.

That meander leads us to Side Quest, which in itself takes a valiant stab at these already well trod and clogged passageways. So let’s strap on our armor and poke about in its dank depths and see what we uncover. 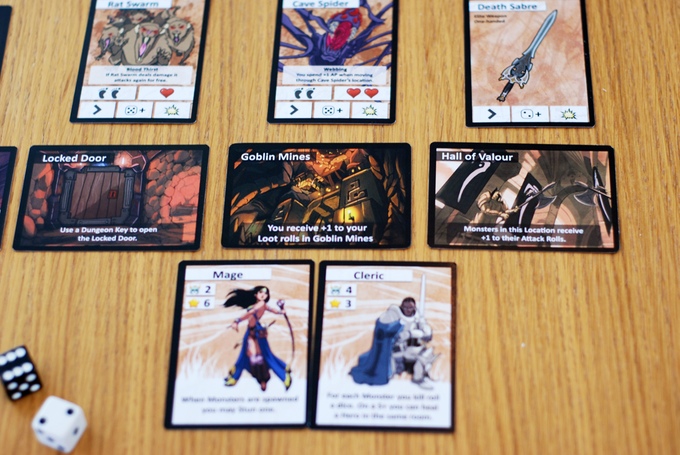 Mechanically Side Quest is a solid little bastard, it’s lean with minimal clunk, sets up quickly and scales well. Game play thunders along with each hero having three actions to either attack monsters, snatch some loot or stumble about, your free to do any of them as much or as little as you like. Combat is dice based with weapons having a roll to hit with their damage specified on its card. Then it’s just a case of going through a prebuilt deck of dungeon levels to reach the heart, kill the dungeon lord and win the day. Its as simple as that, think of it as Thunderstone very unadvanced.

Side Quest includes one mechanic that I absolutely adore, it’s the Damsel. When these cards appear, the heroes have three turns to rescue the imperiled wench by rolling a success. Failure results in her dropping further at the end of each round before finally being plunged into the fiery pit below and ending the game. It’s innovative and adds a great push your luck element to proceedings.

Hand on heart I wanted to enjoy this more than I did. The dice rolling for combat is fine I dig me a spot of randomness, alas a run of bad rolls can see things unraveling faster than a kitten in a yarn factory with little in the equipment deck to help mitigate this. And once one hero dies its game over for everyone, as this is aimed at a fast and dirty dungeon in your pocket delve, I can roll with that punch, this isn’t Descent after all.

Where I do have a bug up my butt is with the theme and art. The monster cards look like they just stumbled in from a 1980’s Top Trumps, the rest isn’t much better running the gamut from cool to meh resulting in the theme wafting away like a fart in a wind tunnel.

Elements like the damsels and cute familiars make me think that this wanted to be a tongue in cheek silly dungeon jaunt. Who cares if your entire party just got butchered because it was a laugh. But as it stands its a schizophrenic muddle, if more attention had been lavished over the aesthetics it would have made a huge difference. Just step back and look at Welcome to the Dungeon, there we have a game and theme hand in glove, it’s a silly push your luck dungeon game and everything in that box enforces that.

I’m struggling to recommend Side Quest. The game is enjoyable and mechanically it’s very sound. Unfortunately, the inconsistent art and design barges past brandishing a pin and pops your fun balloon. Those looking for a short, sharp shot of vicious fun will certainly be entertained, disappointingly the themes so generic you won’t be clamoring to return to its bland dungeons. 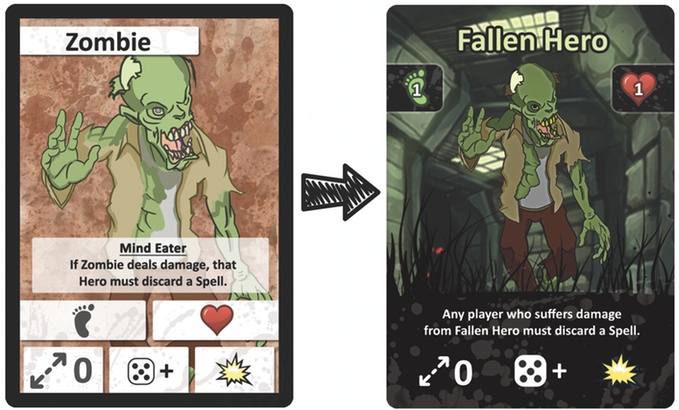 I’ve exchanged emails with Steve Side Quests designer and I know that he has plans to address some of these issues. My review is based on a pre-production copy I received. Fingers crossed, they can lavish a more satisfying flavor onto what is almost a very cool little game.

DUNGEONS AND DRAGONS: CASTING TRUE RESURRECTION ON THE GAME

Star Wars Imperial Assault
Be the first to comment!
Leave a reply »