Spartacus A Game Of Blood & Treachery 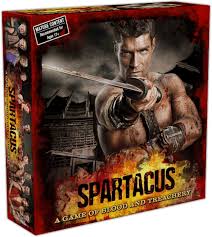 Great use of the theme.
Fighting in the arena.

This is a great game and can be picked up for a decent price these days. The arena fights are brilliant and we strongly suggest picking up the expansion, it really takes this game up a notch.

Spartacus – a game of blood & treachery to give it its full moniker was the first game out the gate from Gale Force 9, they had some considerable success last year with Firefly. And after having savored what they did with that license and much Nom! Nom! later I decided to give this a nibble.

The game follows the events of the first series of the popular Starz TV show, based loosely on the true exploits of the slave uprising against their roman oppressors, ooh and Stanley Kubrick made a film of it with Kirk (manly) Douglas and his chin, and some oysters and other subtext. Subtext was something the show didn’t do, it did all full frontaltext It was a gloriously over the top and filthy piece of TV jammed to the hilt with blood, gore,tits,bums and John Hannah chewing the wobbly scenery and swearing like a sailor. If you’ve not seen it I can heartily recommend giving it a shot, the later season’s failed to capture the fun of the first in my opinion, but that first season was slick with more joy than a freshly oiled gaggle of slave girls.

Uh, oh yes sorry got a little distracted. So the game see’s you running a Ludus or Gladiator school (think Harry Potter but with more stabby stuff) and is played over 4 turns, i’ll go into more detail on those in a moment. But to give you the gist you get to do some double dealing and mischief to the other houses, go to market and trade equipment, Gladiators or Slaves and finally the best bit, stage games in the arena and batter the living poop out of the other players premiership Gladiators.

And rinse and repeat, that’s it really. The goal of the game is to reach 12 influence, the first player to hit that dizzy height wins the game, and gets to utter assorted roman obscenities at your lowly opponents. You acquire influence along the way by staging the aforementioned games and winning in them or from playing Intrigue cards (more on that in one moment).

So those turns I mentioned…

Turn 1 – Upkeep. – There is a simple economy to the game, each gladiator you own costs you a coin to maintain, that can be offset by keeping slaves i.e. 2 gladiators and 2 slaves evens out with no extra income, grab an extra slave in the market and next round you bag a coin. You start the game with various slaves and gladiators dependent on the house that you have chosen to play with, each coming with different amounts of these things and some special powers. At the start of every round you balance the ledgers dependent on your slave/gladiator ratio.

Turn 2 – Intrigue – In this round you are dealt 3 Intrigue cards, these have a variety of powers from dishing out influence to nobbling a rival player’s Gladiators and other nefarious deeds. They all come with a intrigue score that you require to be able to play them, if you don’t have enough fear not as you might be able to cajole another player into helping you reach the target, this can be achieved by either bribes, threats or my favorite lying. You can make as little or as much of this round as you like, initially it can be overlooked only on subsequent plays have there been more and more negotiating and mischief in my group.

And another word on those intrigue cards. You can choose to play these cards not only on your opponents but also on yourself, and that’s the rub. I have run into a few games now where a canny opponent has kept a hand of the more powerful Influence cards and then rather suddenly brought proceedings to a sharp halt with a win, leaving the other players struggling to halt the sudden power grab unless they have cards of their own. 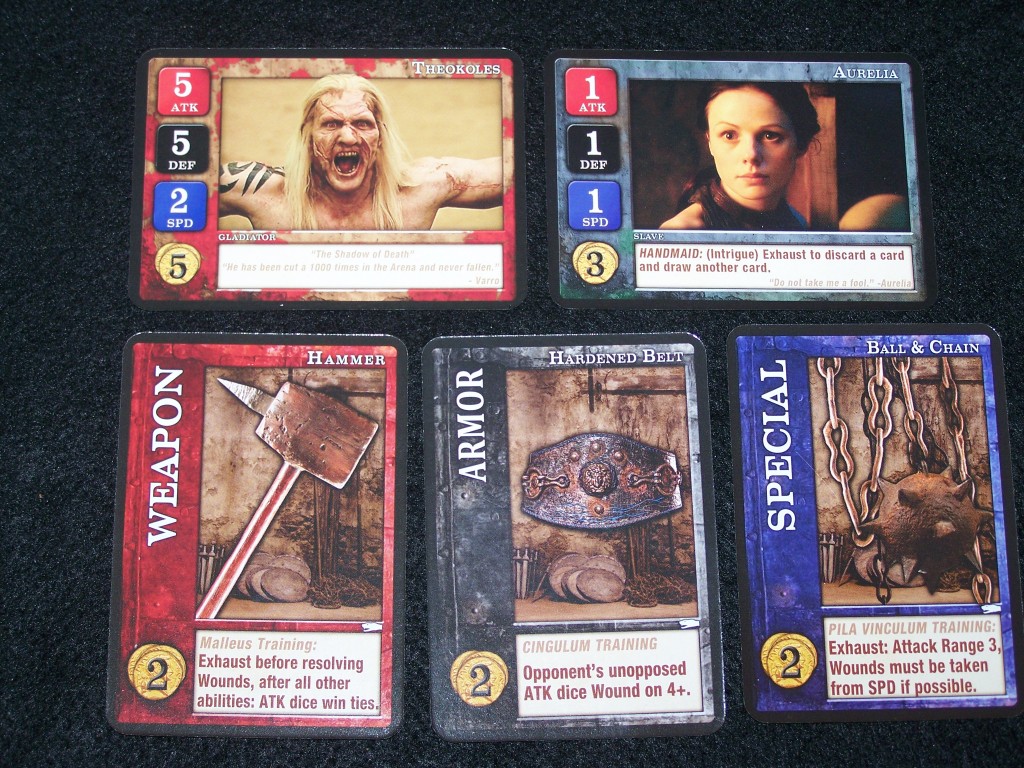 Turn 3 – Market – This is where you get to buy all the good stuff. Players first get the option to offer up any slaves, gladiators or equipment they have for sale or trade between each other and then the round moves to the auction. Market cards are dealt face down dependent on the number of players and then each is turned over in turn and the players get to make closed fist bids on them. In the event of ties then the tied bidders bid again, slowly rising the price of the cards. This is all great fun, like storage wars with frantic bids getting thrown in to nab that cool gladiator or to stop somebody else from getting it to add to their roster.

There is one final round of bidding at the end of this round for who will get to host the forthcoming games, the advantages of this are gaining influence and choosing who gets to fight in the arena. And eventually the host will have the power of life or death over a defeated party in the arena. 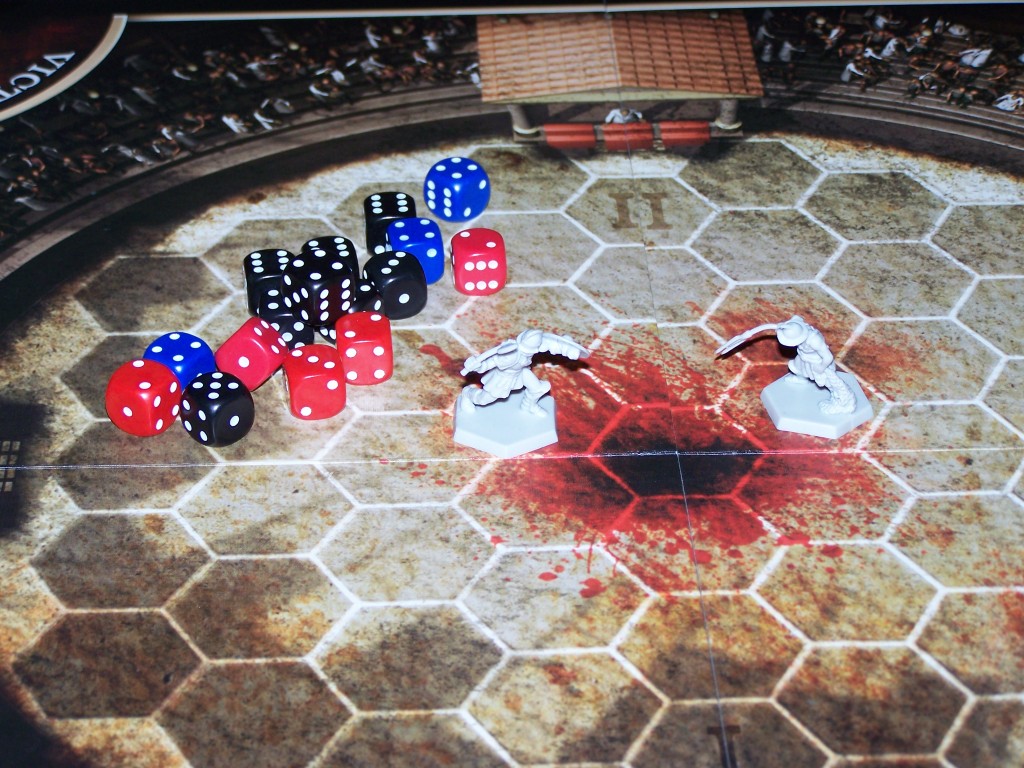 Turn 4 – The Arena – This is where the fun begins. The host gets to chose who goes in the arena and any player refusing this generous offer loses influence. Once the two victim’s are chosen they pick their Gladiator and any equipment they will be using, then everyone gets to bet on who they think is going to make it out in one piece and whose leaving in a bucket.

Gladiators Ready! Using a simple but effective mechanic each Gladiator comes with 3 stats. 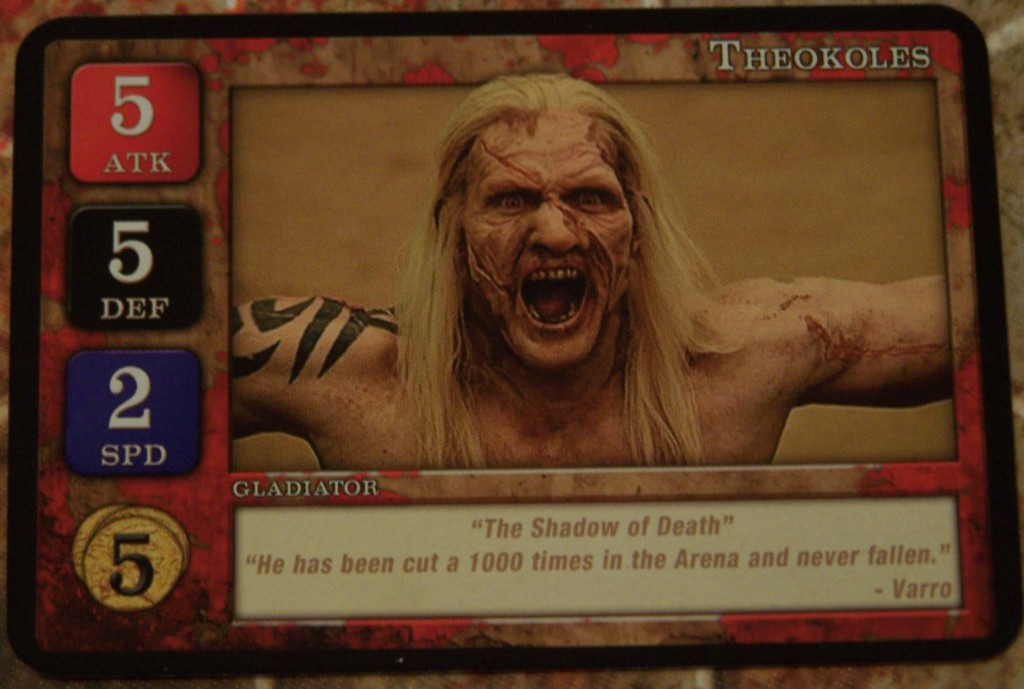 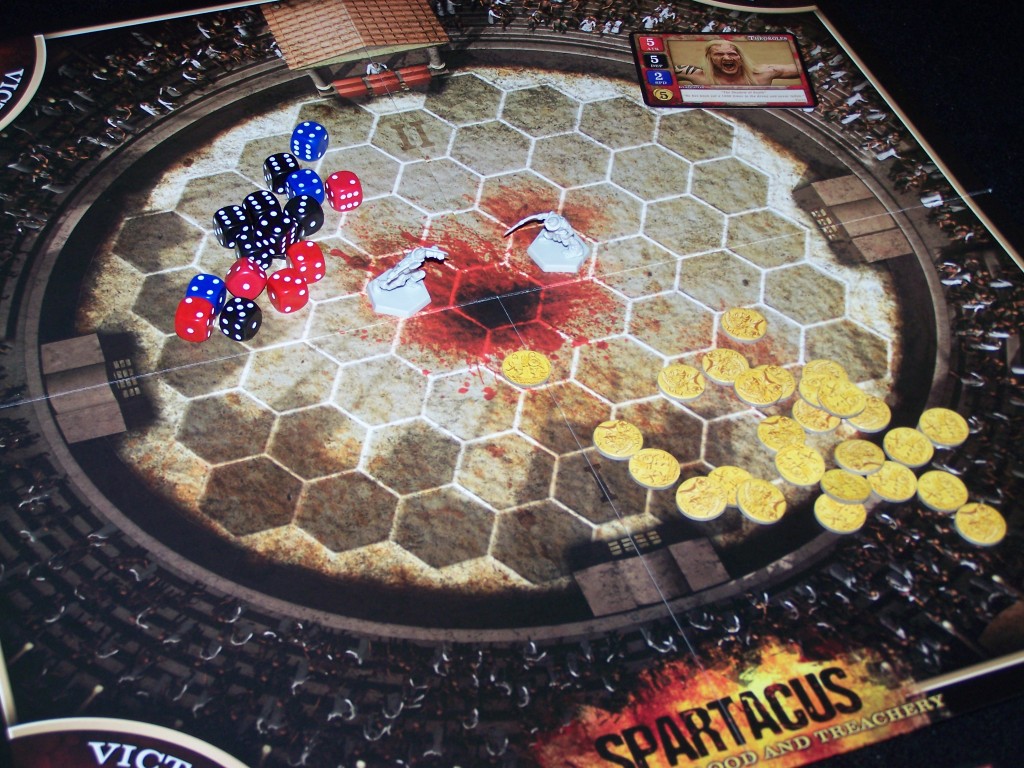 Dependent on your chosen Gladiators skills you snatch up the dice for your guy and then the fight is on. The speed dictates how many spaces you can move, after some running about the stabbing begins. Upon attacking the attacker rolls his RED dice the defender the BLACK – these are lined up and compared highest to lowest, with the higher number winning. Any attack dice undefended against are considered a hit. Any wounds sustained from this are taken from your dice pool of your choice weakening your Gladiator.

This keeps going until one poor soul runs out of dice, dependent on how many you are whittled down too will dictate whether you live to fight another day or if you lost your head.

This is such a simple mechanic but it works so well, especially when you throw in some of the equipment on offer. And once your prize fighter has a few wins under his belt he gains favor making him more valuable in games, and sticking a large target to his head. So much fun, we had people cheering on some of the favorites during some close bouts.

Whoever hosted the event has a final say so on whether any injured loser’s live or die with a thumbs up or down. If the Gladiator in question has won a few fights and gained favor his death will cost the host influence, making it a costly move if they are a popular fighter.

So this is a great deal of fun. Its a simple game to teach and once a complete turn has been played its easy to get into the swing of things. The components are of a decent enough quality the miniatures for the gladiators are acceptable although most of mine had bent swords and tridents making them look like they where brandishing exotic fruits rather than deadly weapons, but at the games price point its hardly a deal breaker.

This does suffer from from the old problem that once you are playing catch up that divide can open pretty quickly, and unless the other players are willing to team up to take down the more wealthy and powerful players you can quickly find yourself being outbid. There is also that intrigue card problem which can just suddenly end a game.

But its not all doom and gloom, there is a chunk of fun to had. The arena fights are a hoot and with more plays and a willingness to spot when a player might be moving into that power position should avoid some of those joy kill moments. But before you move on there is one more thing. 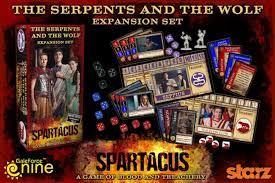 So this is the expansion for Spartacus. It adds two extra houses so you can play up to 6, I’m not convinced how balanced all of these are. Whilst I’ve not noticed any one that seems overly overpowered compared to the others, these two do seem to have something a bit meatier than the originals. It also comes with more coins and tokens and two more mini’s of kumquat brandishing muscle men. And a bunch more market and intrigue cards.

But by far the best thing that this adds to the mix is the option to play a Primus in the arena stage. There are a couple of intrigue cards that allow this or once your influence has reached 10 you can call one in the arena mode.

And this is when the fun begins, because you get to have up to 4 in the games now made up of two teams of two and this really spices up this already fun stage of the game. Add to that there a few new gladiators with special powers that can allow you to switch allegiance whilst during a primus and this all greatly increases the fun factor.

This expansion is a must really because the Primus rounds are hilarious and it really makes a big difference to the game having those extra fighters on the board, also giving you greater opportunities to team up against those more powerful opponents.

Summing up the base game is a great buy especially if you can pick it up for some of the cheaper prices this has been going for, and the expansion is a must just for the option of the Primus rounds. Gale force 9 do have a small extra expansion of 6 new gladiators that were previously offered as promo’s for a fairly reasonable price that I intend to grab at some point.

This is a real beer and pretzels game, silly, pretty fast to play once everyone is into it, and if you are willing to forgive some minor niggles with the suddenness of the end game you are guaranteed to have a rollicking evenings entertainment.