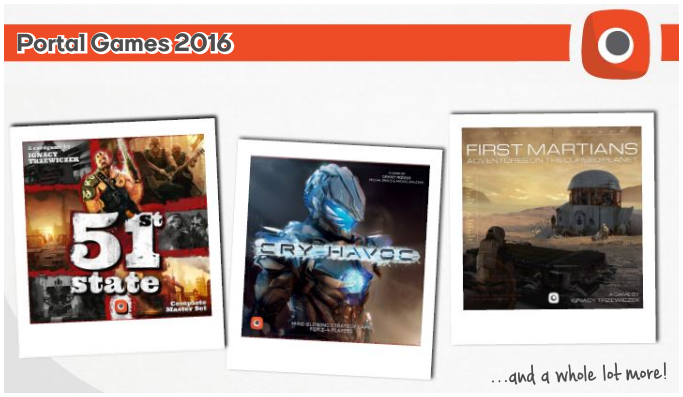 Over this weekend Portal Games has been been running Portal Con. Its a game convention with its focus on Portal Publishing, where they announce how the companies been going over the past year, (which is well it appears) and have lots of tournaments and generally its an excuse to indulge some good old fashioned gaming.

One part of this event is the announcements for what’s coming up for Portal in 2016, now a large chunk of its release schedule is specific to the Polish market where Portal have nabbed some big names for a Polish reprint including Cool Mini or Nots Blood Rage which is quickly becoming one of my most played and enjoyed titles and the yet to hit The Others. They also have many Iello titles including Welcome to the Dungeon a cracking little card game and The Big Book of Madness, so that’s all very nice.

However what we all really want to know is what else Ignacy has cooking for 2016, what new releases are we getting? well grab hold of something and gird your loins because there is some very very exciting news emerging, and here we go..

51st State was the forerunner to Imperial Settlers a firm Who Dares Rolls favourite and had very similar card play style of building a civilisation up and taking on your opponents. One of its more interest elements was it shared the post apocalypse world of Neuroshima Hex and had a much cooler ravaged world theme. It was tight and cool little game but was marred by a complicated iconography on the cards that made it a steep learning curve for new players, its a cracking little game and well worth a look and now there’s an even better reason why.

What were getting in this master set is the original game re-imagined with fantastic new art and a completely overhauled set of mechanics utilising the simpler system from imperial settlers, also included will be both the previously available expansions New Era and Winter again re-imaged for this new streamlined system. The game is going up for Pre-Order on Portals web store from Monday and will utilise the Kickstarter Stretch-goal Model with the more Pre-orders received opening up more content exclusive to the pre-order release. I know where I’ll be lurking in the web this Monday and look for more news when we get it.

So Cry Havoc is a card-driven, asymmetric war game set in a brutal, science fiction setting which has already peaked my interest, its from designers Grant Rodiek, Michal Oracz and Michal Walczak and originally started with a more pedestrian theme of Battle for York before getting its new sci-fi polish. Blood Rage and Kemet where the two titles mentioned in passing for this title and if it manages to capture any of the brutal fun of those two titles then were in for a real treat. This also a big deal for Portal as it looks to be the first of their titles to include mini’s. This one is due to hit at Gen Con 2016.

And then if you didn’t think there could be anything more exciting then those two announcements we have First Martians:Adventures on the Red Planet. Yep its Robinson Crusoe in space.  This see’s players challenged by the hostile conditions of Mars as they attempt to survive on this barren and unforgiving planet. During a Periscope chat from Portal Con Ignacy has hinted that the game will contain both a legacy element and also utilise an App. Robinson Crusoe is a riveting and merciless play and I love it warts and all, the possibility that Portal are revisiting this rich play style and polishing up its many charms whilst chucking a sci-fi theme at it sounds amazing.

As to how much Legacy is in this who knows, but the original Crusoe had all the feel of a game that could utilise a legacy style refurb and some of its existing mechanics were already damn close to the system. As to the App we will have to see, I’m not against them and can see how an app doing the leg work for something like this and being able to throw up random terrors or remove the clutter could be a great addition, were just have to wait until the Autumn when all will be revealed.

And then one more mystery game hitting at years end around Gamma??

In addition to all that we’re getting another Imperial Settlers mini expansion “3 is the Magic Number” around May and a new faction at Gen Con allegedly a Dark Tribe?? Goblins, Orks Zombies who knows??

Oh and they re-branded with a new logo, which Is the only thing about all this I’m not sold on as I like the old one, but I suppose you can’t please all the people all the time eh?