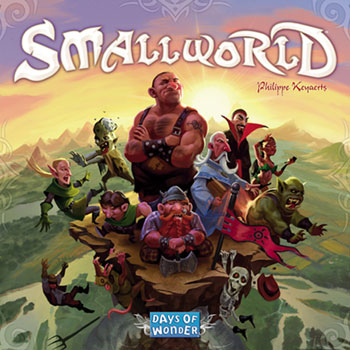 May be too cutesy for some.
Very light strategy.

This is a great entry level for beginner armchair strategists, the clever randomness of the races means that you will always have a fresh experience when you bring this to the table.
It is light but can be a lot of fun, and if you have any junior gamer's in your home this is a great place to start.

And now for something light and fluffy.

Small World is from designer Phillippe Keyaerts and is for all intents and purpose a kid friendly variation on his earlier game Vinci. Vinci was set in Europe with the player taking the role of various civilizations in a whistle stop tour of the history of the world. Both of these games share the same DNA and mechanics however that is where the similarity ends.

Whereas Vinci was a pretty dry grey po-faced saunter through European shenanigans Small world is a big colorful pinata of funky races and colorful illustrations just asking for you to batter its fantasy goodness out of it.

Its a great looking board and components and once set up to play it looks quite lovely.

The set up is you are all inhabitants of some fantasy land that is just not big enough for all of you to fit, cue inter-species scuffling and Darwin levels of extermination. They key mechanic and cool feature of the game is the races, in the base game you start with 14 different creatures ranging from Dwarf’s, Goblins to Ghouls and alongside them sit 20 special powers.

At the start of a game you randomly draw these races and powers and they fit together jigsaw like to create assorted fantasy civilizations. This simple shuffle means there are always going to be new tactics to games, bringing a unique mystery to each new play. And whilst some combinations work better than others it is pretty well balanced, with no one race becoming a superpower.

Everyone picks a race from the first five available (you have the option to pass down the line by leaving gold on unwanted races, making them more appetizing as that stack of coins grows) and then in turn you place your units across the board taking as much of the limited space as possible. Its all pretty light, combat is resolved by amounts of units in an attack and any modifiers from the character cards or special abilities and so it goes.

But.. At some point you will either exhaust your units through battle or just be spread too thin taking lands, possibly you might just get bored of them. Here’s where the cool stuff happens, you can put your civilization into decline and pick a Â new one.

The races are constantly altering with players switching them out for that new shiny race with an extra bonus that can help you to amass the gold you desperately need to win the game.

The game takes place over a set number of turns dependent on how many players and when the final turn ends the player who has the most gold wins. You get gold from owning lands and again the character modifiers and that’s pretty much it.

As I’ve said its pretty light and easy, you can explain the rules in about five minutes and after a turn everyone should get where they are at. Veteran players will have a small advantage by having an idea of what combinations of races work the best but it doesn’t take long to get up to speed.

Included in the box are hint sheets that has all the various characters and skills and brief descriptions of each for those beginners. I’ve played with the family and all of them picked it up pretty quickly including George my 8 year old, who promptly pwned us on his first go.

This is an easy to teach and play game, has a quick set up and I would say its suitable for all ages. There is some strategy there for the gamer’s and I think my group will have a blast with this. I think with some of the addition’s to keep it fresh (see below) this is defiantly something I’ll be keeping around.

I’ve not yet messed with these but after the fun I’ve had with the base game I’ll certainly be diving in.

Small world underground is a standalone game that can be used alongside the base game – and adds some cool new features and when I take the dive will likely be the first one I grab.

The others give you new races and powers and a few other enhancements to help spice things up and can be used in either of the big box versions.

Realms is a set of tiles to make your own boards or use scenario’s – looking at it, it seems the most redundant as the boards in the originals seem fine and I just see it over complicating things.