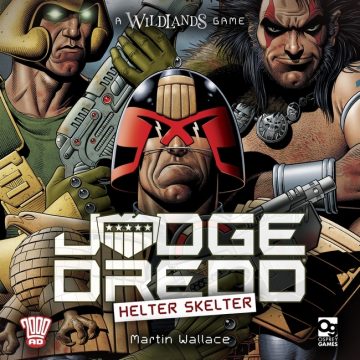 A couple of years ago Rebellion Publishing announced that they were offering their entire catalog of characters up for IP licensing both in Video Games, Movies and RPG’s/Board Games.

Dredd and the whole 2000ad line has up to now had a minimal showing on our hobby tabletops aside from a handful of titles published in the 80’s via Games Workshop.

However the fruits of the Rebellion dealing are already showing up. We’ve already had Block War and Osprey themselves very recently published Cursed Earth a re-imagining of their Lost Expedition game.


The worlds of Judge Dredd, Sláine, Strontium Dog, and Nikolai Dante will be crashing onto tabletops around the globe in October 2019 with the release of Judge Dredd: Helter Skelter, a new miniatures board game building on the critically acclaimed Wildlands series from designer Martin Wallace.
The game brings some of 2000 AD’s most well-known characters to the streets of Mega-City One, fighting for the shattered fragments of their own universe! Faction-specific action decks and new special character abilities give each group their own playstyle, from the well-armed Judges with their explosive ammo to the bestial fury of Sláine and his Celtic allies. Playing to your faction’s strengths and exploiting your opponents’ weaknesses will be the key to claiming victory on the streets of Mega-City One.
Artwork from 2000 AD artists Rufus Dayglo, Clint Langley, Simon Fraser, and Chris Weston brings the authentic comic-book feel to the card art, while the twenty unique miniatures sculpted by Bobby Jackson, David Lee-Whitaker, and Jason Wiebe transport these characters from the page to the tabletop.
Speaking about the project, designer Martin Wallace said ‘When they burst onto the scene in the 1970s, 2000 AD and Judge Dredd were absolutely revolutionary. I was hooked immediately by the amazing story lines and characters. It is a privilege that after many years one of my designs is to be used to retell those stories in a different manner, through the lens of a board game.’
Matt Smith, editor at 2000 AD, commented ‘The worlds of the Galaxy’s Greatest Comic are some of the most exciting, dangerous and thrilling in the known universe – so when the likes of Judge Dredd, Strontium Dog, Nikolai Dante and Sláinecollide, as they do in the high-octane Helter Skelter, you’re guaranteed a fun time! 2000 AD is very excited to have teamed up with Osprey Games on this explosive new miniatures board game, and there’s no doubt that fans will have a blast!’
Games Developer Filip Falk Hartelius added ‘It has been a joy to work on Helter Skelter, bringing together the work of so many different illustrators and sculptors into one incredible whole. It is truly a labour of many people’s love – I’m really proud of this one.’

As a lifelong 2000ad fan I’m incredibly stoked to see some of my most beloved comic characters heading to my tabletop.

Judge Dredd The Board Game
Be the first to comment!
Leave a reply »