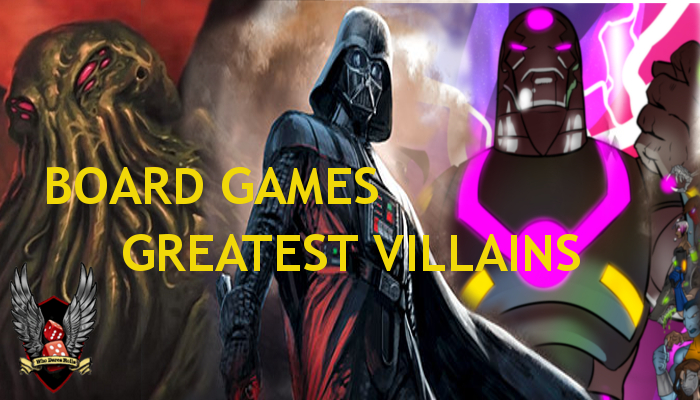 Villains, every hero is only as good as their significantly odious other. Personally, I’ve always rooted for the bad guys. They dress better (usually in black) are always smarter, get all the good lines and without them, things would be very dull.

Whether its the sneering malevolent machinations of Hans Gruber in Die Hard proving himself an exceptional thief or the bespectacled and utterly psychopathic Clarence Boddicker from Robocop being just the worst. You have to admit things are never dull with them around.

And of course, there’s that cathartic release in seeing them get what’s coming to them usually in an overblown and exceptional unpleasant way.

Which got me thinking… What are my favourite board game bad eggs? So let’s have a list.

Reverend Green (Cluedo)
He may seem innocuous, dare I say crap but actually this member of the clergy is less Father Ted and more Norman Bates. Having endured numerous games of Cluedo (Clue to our American readers) during my formative years, one thing became glaringly obvious the good Reverend is a psychopath. He was literally responsible for the murder every game whether it was garroting poor old Mrs White in the pantry or battering Colonel Mustard to a pulp with a lead pipe we never caught the bastard he became my Blofeld. Somewhere in my board game universe, he’s still out there now plotting to ruin a perfectly civilised dinner party.

Dracula (Fury of Dracula)
Most of his mischief has taken place under my tutelage but as classic bad guys go Transylvania’s No.1 bloodsucker was bound to make the list. There are quite a few hidden movement games on the market but Fury stands apart as the antagonist has more bite than the usual silent sneaking types found in those games. In Fury of Dracula, the hunters can very quickly become the hunted. With its day and night cycles putting both sides at disadvantages during the game and the fact that The Count has plenty of dirty tricks up his sleeve from laying traps to sending his thralls after the heroes, it feels like an epic confrontation (as it should). And whether the Prince of Darkness prevails or is hounded to the ends of the earth a suitable legendary confrontation as befitting this dastardly villain is guaranteed.

Pandemic Legacy Season 1
(spoilers people) By now I’d assume most of the board game playing world has managed to get this to their table, but in the extraordinary circumstances, you’ve not? Well, there are some pretty big spoilers following so you can just take my word for it that this is justified on this list.

There’s a late game turnabout and for my money, one of legacy games biggest surprises is the uncovering of a secret plot that means all your hard work defending the free world against the nasty old Coda virus has actually been to the betterment of the bad guy in your midst. Its worthy of anything Hollywood could throw at you and you don’t see it coming and its repercussions left us reeling for quite a few games following it.

Yes, Colonel Sanders, the utter bastard had been playing us like cheap fiddles and when he unveiled his dastardly plot. Well needless to say we were not happy.

The Dreamer (Sentinels of the Multiverse)
Superheroes do have the monopoly on great villains and Sentinels is almost a celebration of these dastardly devils with each game solely focused on taking them down.
If you don’t know Sentinels then its the card game equivalent of any splash page you’d find in a comic book depicting a Super Team battling some big bad.
And considering its lore is not based on any existing franchise it’s remarkable how the villains all arrive fully formed and easily comparable to some of comics greatest bad uns.

The Dreamer for me captures everything that’s great about the game and superhero villains in general. She’s a little girl in a coma whose telekinetic projections are levelling city blocks and causing carnage leaving the heroes with the unenviable task of trying to take her out while avoiding killing an innocent child. It’s a concept straight out of one of Grant Morrison’s fever dreams and brilliant.

OblivAeon probably deserves mention here essentially the Multiverses very own Thanos with an equally bampot universe ending plan and all the expected death destruction and carnage you would expect. As of this point I’ve not played this final installment in Greater Than Games series. But I know Charlie has and apparently he’s a significant big bad hence my playing lip service right here.

Toasters (BSG)
It’s inevitable that those damn Cylon bastards would show up eventually and Battlestar Galactica gave them the perfect vessel with which to ply their particular trade of dick moves. Of all the hidden traitor games BSG is still the high water mark.
An evenings play of this will undoubtedly lend itself to numerous water cooler discussions and memorable moments to be embellished upon for years to come.
My personal dealings with these metallic gits have had numerous moments of literal mouth agape shock when their schemes and subterfuge are suddenly uncovered like a plot twist worthy of any number of long-form TV shows.

Whether it was the sudden reveal of Admiral Adamas betrayal as he aimed a nuke at the human fleet or the time President Roslin managed to spread such subtle disharmony that half the humans occupied the brig and the rest were so untrusting of one another that more than a couple spacing’s followed by extinction was inevitable.

(Darth Vadar) Star Wars Imperial Assault
Considering Vadar is probably one of the greatest villains ever created it’s no surprise that he’d show up on this list. And boy does he live up to his reputation he’s not something that you’ll drop on the rebels early in the game but like the movies, his presence is felt throughout a campaign and when he does show up then the Sith hits the fan.
Imperial Assaults Vadar is that badass Vadar we glimpsed at the end of Rogue One an unstoppable killing machine a force choking, light sabre wielding, unstoppable bad mofo.

Lovecraft’s monstrous eldritch creation has continued to go from strength to strength in the board game hobby not least because most of the mythos is now public domain. Any board game publisher worth their salt is going to give the sanity shredding be-tentacled ones an airing.

The fact that the big slimy git continues to kick our arses during repeated Eldritch Horror sessions is cause enough for him to make his appearance on this list. And I imagine him and his world ending ilk have racked quite the body count over the years and justifiably they’d better be on the list.

Hitler (Black Orchestra)
When we’re talking bad guys who really had it coming Hitler goes right to the top of the list he’s really easy to dislike. I mean what a complete dick.

In Black Orchestra you and your fellow conspirators attempt to take him out through any number of desperate or plain suicidal plots most of them making the finale of Inglorious Bastards look like a sensible well thought out plan.

There’s just something about killing Hitler that gives you a lovely warm glow.

Dan Yarrington (Game Salute)
The board game industry and its fan base I’ve always found to be warm and welcoming and nearly all a really great bunch of people. Which means it takes a really special effort to manage to be so disliked by so many in this community yet Dan Yarrington CEO of Game Salute has attained the status of a truly bad egg.
Whether it’s down to some of his dubious business practices with his peers or some even more nefarious shenanigans on Kickstarter if it was uncovered he had a volcano layer and a penchant for roll necks and white fluffy pussy cats I’d not be surprised.