previous
Who Dares Rolls Podcast 51 - Where is my Mind?
random
next
The Joy of Opening a Booster Pack
3163 views 0 likes 0 comments 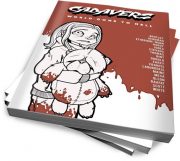 Greetings all, I appreciate that things have been a tad quiet around here and that’s mainly due to the expansion of my own personal gaming guild with son no.3 arriving on the scene just a couple of weeks ago. So hang in there and we’ll be back to our usual slipshod release schedule before you know it.

However just because I’ve been slacking off it doesn’t mean the rest of the WDR family have been resting on their laurels, Charlie who produces all the wonderful RPG content for us has continued to churn out lots of lovely stuff and has been running a series of RPG of the day articles on Faked Tales his own personal little bit of the web, so any of you starved for content then go and take a look over there.

And speaking of Mr Charlie he has also recently written a couple of short comic stories for a anthology that’s recently gone to Kickstarter, I’ve been excitedly following the creation of this opus as he’s been sharing with me the development of the stories and the art and they look fantastic. I’m something of a big comic book obsessive and when I’m not gaming I love to lose myself in a comic so I’ve been digging the heck out of this stuff.

So the comic is live on Kickstarter and already hit its funding goal and they’ve started to unveil some stretch goals. Charlie put together a little piece about the book on his site that I’ve shamelessly robbed and I’m sharing here for your delectation. Aside from supporting some highly creative types on this project Charlie has hinted that there my well be a gaming connection if it can fund enough.

I’ll let Charlie take it from here and for the measly sum of £15 you can get yourself (in my opinion) a pretty cool book so what are you waiting for.

A word from our not sponsor

As we speak, there is a Kickstarter project for a comics anthology I’ve contributed to. The anthology is Cadavers: World Gone to Hell and it looks like it’s going to be stunning.

The creator of the Cadavers comics is Matt Hardy, who used to be a customer of mine when I worked at a comic shop, then a friend when we realised our tastes were so incredibly similar. Matt has written three Cadavers comics with Ed Bentley, set in a version of Earth which sees monsters as refugees from another, spookier, Earth. There’s a lot about immigration, about race hate and the like, but it’s also a really fun read with some awesome-looking monsters as well. Like with X-Men, a subject I can and will talk endlessly about, it has fun stories and some deeper topics.

I was asked about whether I wanted to contribute to Cadavers and while I did, I also had to own up to not having read the initial Cadavers comics, mainly as I was scared I wouldn’t like them. Matt made it clear that he put a lot of weight in my opinion and I was terrified of that responsibility. Once I did, they were great and I instantly had ideas.

Look at that charismatic blob.

The first was about a blob seen in about three panels of Cadavers Issue One. Who was this blob? I thought they were a detective, down on their luck. The project I’d be writing for was a prequel, so we’d get to see the Blob Detective in their heyday.

With the incredible Russell Mark Olson handling the art and Rob Jones on the lettering, Blob Detective is so much more than I could have made it alone. It’s been a riot to create and to share the idea with others.

The second idea was a kind of love story, set between two worlds. I have this plan for an anthology which is probably prose, where a second Earth appears and we explore the mundane lives of people on both worlds, looking at each other from so far away. Reading the back-matter of the Cadavers comics, it made that part of my brain twinge. I thought about a love between the normal and ‘spooky’ Earths, which could be one of the catalysts for the way the worlds get breached and the Cadavers enter in the main series. It was lofty and needed a bit of finessing, especially because I was playing with Matt’s cosmology. This story came more from moments stitched together like a Frankenstein’s Monster than how some stories just naturally fall together. I kept the remit for the cast specifically broad so the artist could draw anyone they wanted. Rory Donald’s exceptional artwork caught the landscape and the characters perfectly. This is again lettered by Rob Jones, who’s been great to work with on Blob Detective and I’m sure will be great when he’s done on this.

Even as I wrote Fractured I knew it wasn’t going to end well for my cast, but I still kept going, wishing for a better fate and knowing it would escalate to a quite brutal level. Sometimes you aren’t prepared to kill your darlings in such a graphic fashion…

There are several more stories in the Cadavers Anthology made by some extremely talented people. I’ve helped Matt with some of the logistics of what’s happening in the throughline story of the anthology and gone through a few of the scripts. There’s a lot of talent here and while I’m obviously biased as my work’s in the collection, I definitely recommend checking out the Kickstarter here .

This was going to be a brief story about my origin with writing comics, but that’ll have to wait for another day.