Who Dares Rolls does Essen Part 1. 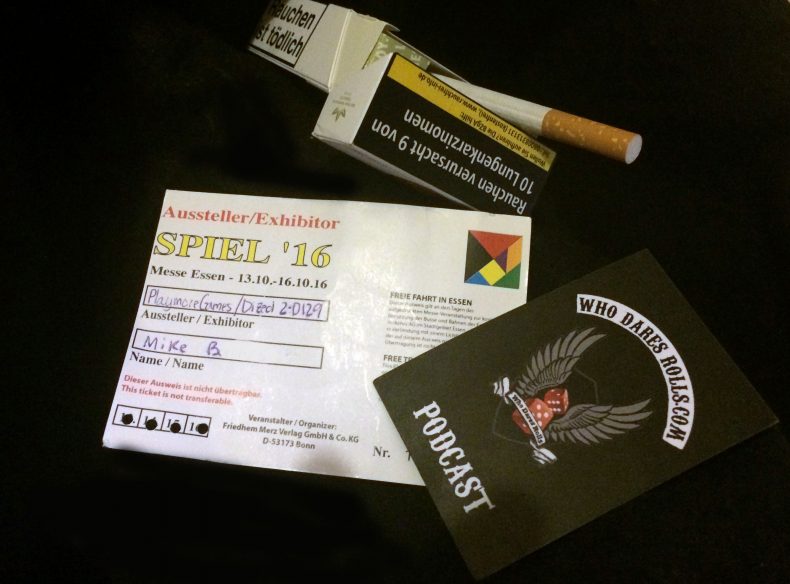 The facts expressed below belong to everybody, the opinions to me. The distinction is yours to draw…

Ever since starting this blog there has always been one entry in my gaming grail diary that I’ve wanted to put a big tick against. Attend Spiel in Essen a mecca for enthusiasts of cardboard entertainment to gather and bask in the sheer ridiculously huge amount of stuff that gets released in our hobby.

The problem with this particular dream, well 1. it’s in Germany and travelling to faraway exotic locales isn’t cheap, 2. staying somewhere once you’ve got there, well see 1. Now we have many resources at our disposal here at WDR Towers, ego, beards, tea and social ineptitude but a significant cash flow is not one of them. So while the idea is fine the practicalities are entirely something else add to that my work commitments at this time of year, and frankly, I’ve more chance of attending the show, then well Michael Bay has of producing a motion picture with anything approaching subtlety intelligence or historical fact. *

* See Pearl Harbour, his 2001 magnum opus car crash attempt to plastering a fictional sappy romantic story over the 1940’s equivalent of 911 while Ben Affleck singles handily wins the battle of Britain. A bigger pile of septic tramp wank you will not find. 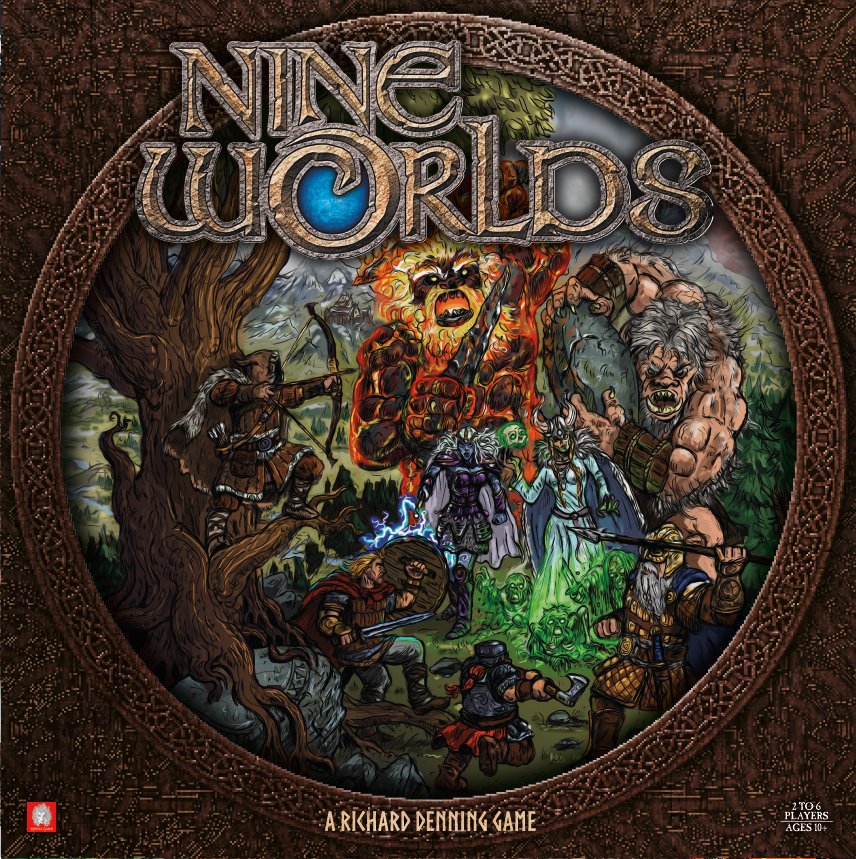 Yet despite these many impediments I found myself in the position this year of being offered not once but twice to attend the show?? First Richard Denning reached out to join his team to demo Medusa Games new Viking enthused abstract euro battler Nine Worlds (review forthcoming). Unfortunately, during that week had I not only apparently contracted mild Ebola but skipping work was as likely as winning Escape From Colditz as the allies. I regretfully declined only to then get approached by Jouni from Playmore games to join them on their stand. Feeling that somebody somewhere was trying to tell me something I took the chance and asked about the possibility of time off and was stunned to be told yes.

And so it was via this series of fortuitous events that found me dashing to Southampton Airport Wednesday afternoon to board a flight out to Dusseldorf my enthusiasm swiftly dampened when I found Luke from The Broken Meeple in the departure lounge. 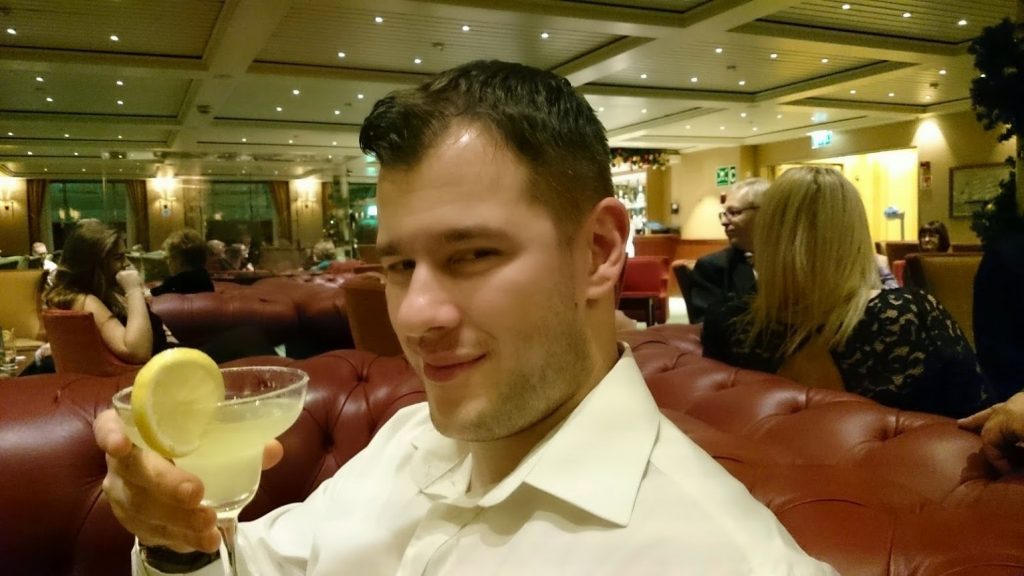 See he’s a smug git, he’s the villain not me.

Now some words on Luke, you see he’s my arch-nemesis I’m not entirely sure he’s aware of this but then its probably to do with his upbringing (he’s from the west country you see*). This state of war has existed since his commencement of blogging around the same time as me. We’re the Yin and Yang of Hampshire game bloggers whereas I swear (a lot), smoke, drink to excess and wear lots of black and will actively seek out and play games with no redeeming value he goes to gyms, eats vegetables, drinks green tea?? (what the actual Christ is that stuff) And enjoys a good stern Euro. To make matters worse, the bloody Dice Tower accepted him while Saint Tom and his network of choir boys actively avoid me. Although I can’t for the life of me think why. So yes there’s a brooding animosity between us, I’m not entirely sure he’s aware of it, but he will get that startled look of Bunny in Headlights when in my presence which is probably the sensible response.

*for our US audience think of it as Appalachia but with less Banjo’s and more clotted cream and pasties.

Bumping into some other local gamers, we all piled onto the plane where I may have slept and dribbled a bit. This is pure conjecture but holds some water having seen the look of utter disdain from the poor unfortunate who’d been seated next to me.

Having arrived in Dusseldorf, I commandeered the cab which the others had already squeezed into and thrust my phone into the drivers face demanding to be taken to the accommodation supplied by Playmore some Airbnb in Essen. After a lengthy ride around the city and an increasingly escalating cab fare that my fellow passengers looked on with startled horror, the driver announced with a flurry of expletives that we were lost (I’m gauging this on volume and the fact that he definitely used a poo word). The others in a rush to help (get me out of the cab) were googling the location, and everyone agreed that the darkened litter strewn alleyway we were idling in was pretty damn close and that I’d be okay here.

Leaving the security of the Taxi I staggered around completely clueless of my destination and short of missing a neon sign announcing “Lost Tourist” to attract any passing muggers. Thankfully Anna from Playmore came to my rescue navigating the streets looking for a sweary bearded man who against the odds she found me, ushering me back to the apartment we would be residing in. 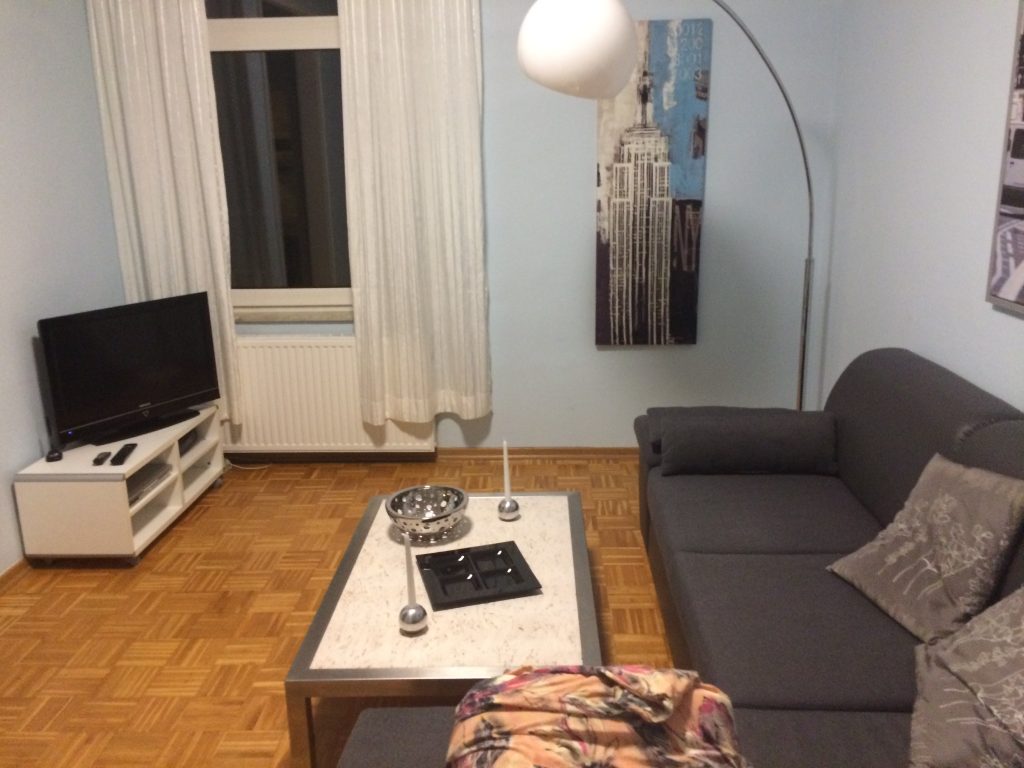 Bernhard was already in the flat he’d been procured to supply a German speaker on the stand as it was deemed my original plan to shout loudly would not cut it as a means of multilingual communication. Anna sensibly retired for the night while me a Barnhard did what all gamers do when faced for the first time discussed board games and what we enjoyed. Bernhard is an avid RPG fan, fond of Euro’s and any games requiring deep thinking, so that was a short conversation then…

DAY 1
So no coffee in the flat just Green Tea?? What’s with this bloody Green Tea stuff. 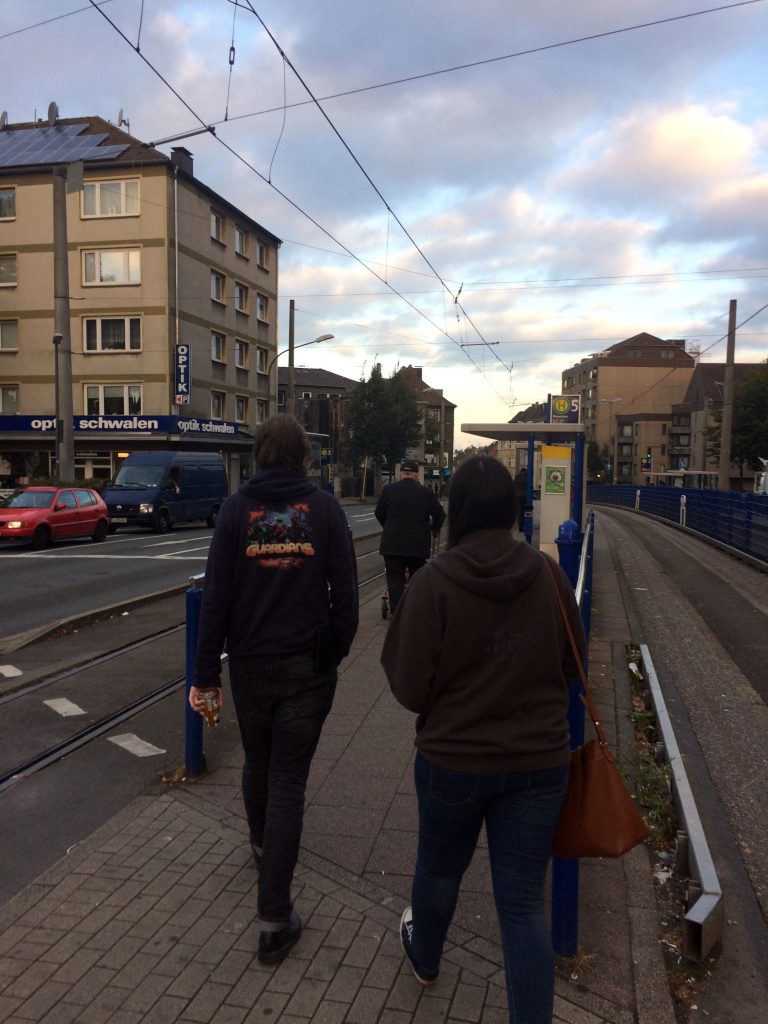 Emerging into crisp German October morning, Bernhard being a bit handy with the lingo manoeuvred us across Essen’s public transport system. All was fine until we hit the subway to the halls. Now a sensible man, someone quick witted, organisational might have put on extra trains this being an annual event and all that with unprecedented numbers. I mean there’s one thing that German’s have always been renowned for is their efficiency, right. Well, apparently that doesn’t extend below ground or to rails (trust me we will get back to the train system again, and again). So yeah riding on the subway in Essen is interesting… 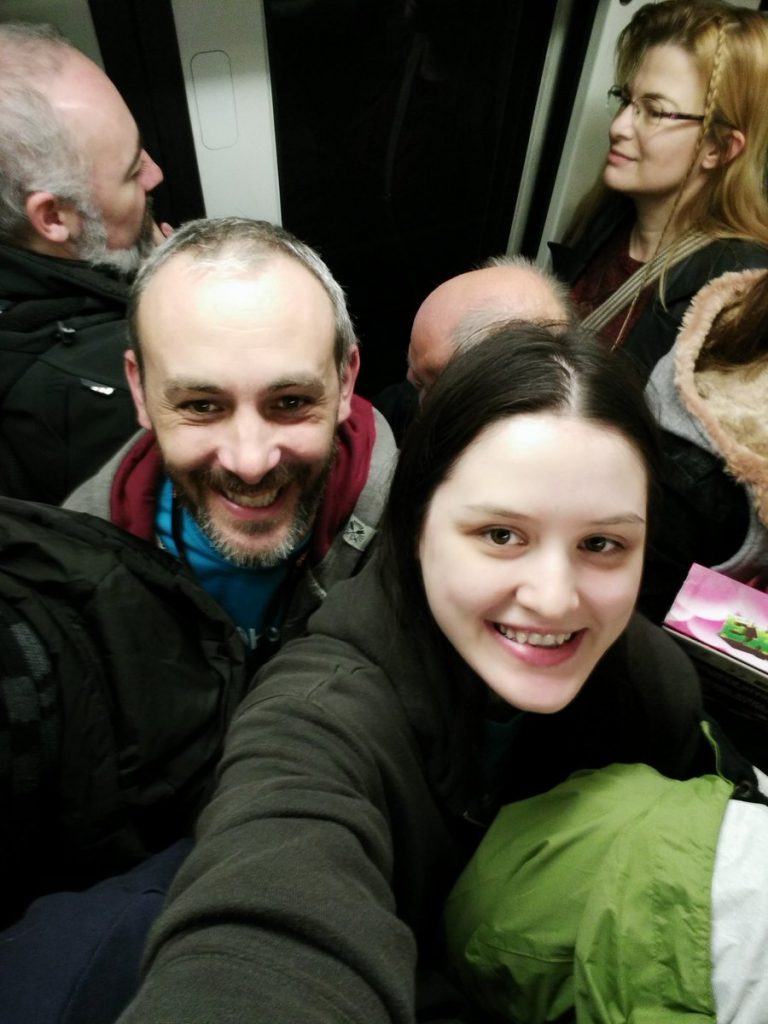 Already a sizeable hoard had gathered in preparation of wedging themselves in the cars, which are pretty full the tactic is to soften your body and merge with the mass of human as it squeezes itself into the cabs like so much reverse human toothpaste. 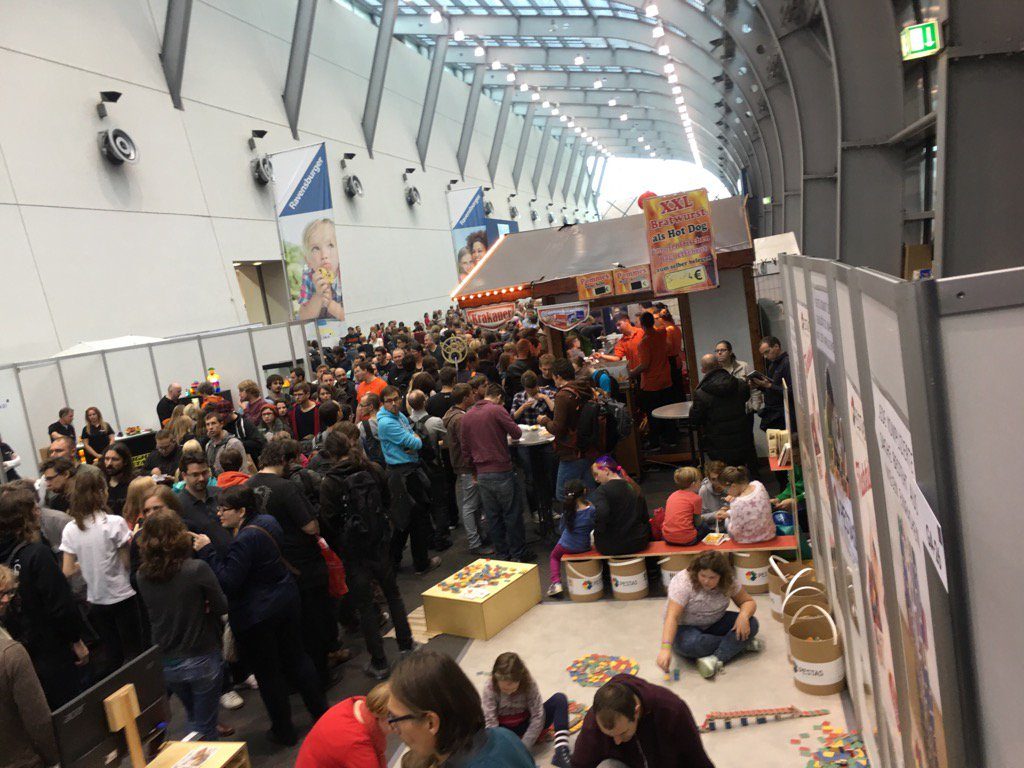 The show itself is immense this year the event was spread over seven halls, with 1, 2 and 3 each equal in size to the UK Expo’s single beast and heaving with distributors and retailers. Playmore was situated in Hall 2 opposite Games Workshop that had a commanding floor space with the most bizarre setup where they had encircled themselves with tables with high cluttered racks of stuff and two half-arsed stands for decoration. Compared to many of the exhibitors it looked like a clothing stall at the tail end of a church fate the opposite end of the stand presented Blood Bowl in its new iteration, and at least some effort at providing some thematic trappings had been attempted. But of course, GW was not telling when this much-anticipated release will happen, considering what many other exhibitors were doing it had the faint aroma of half arsed. 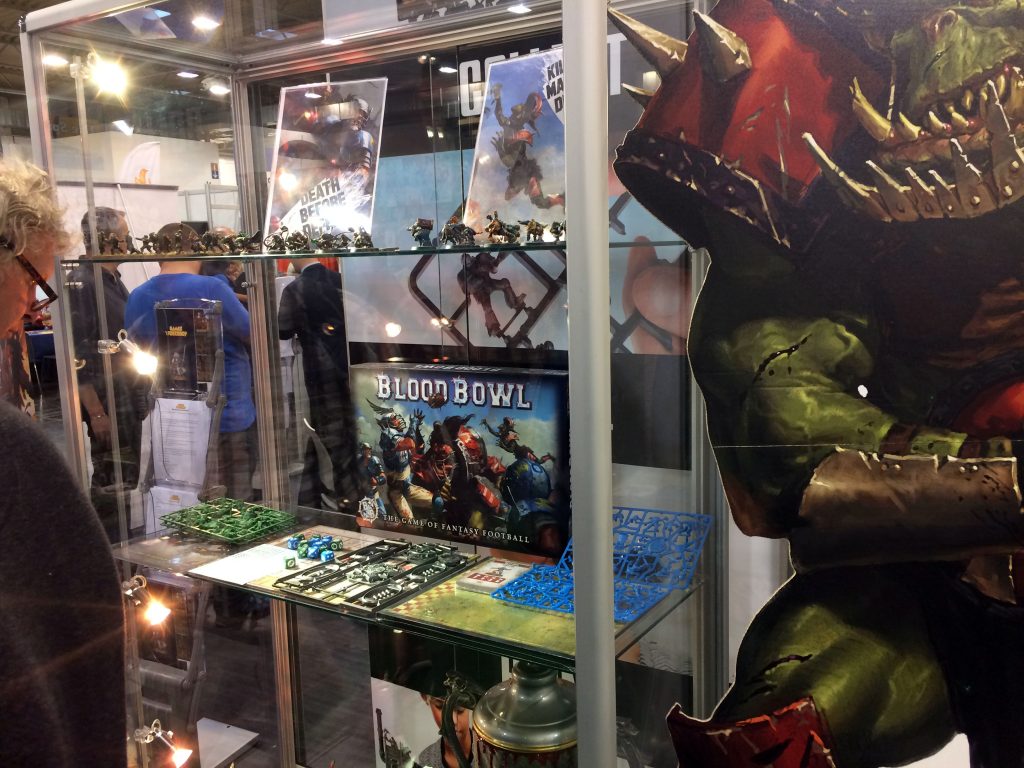 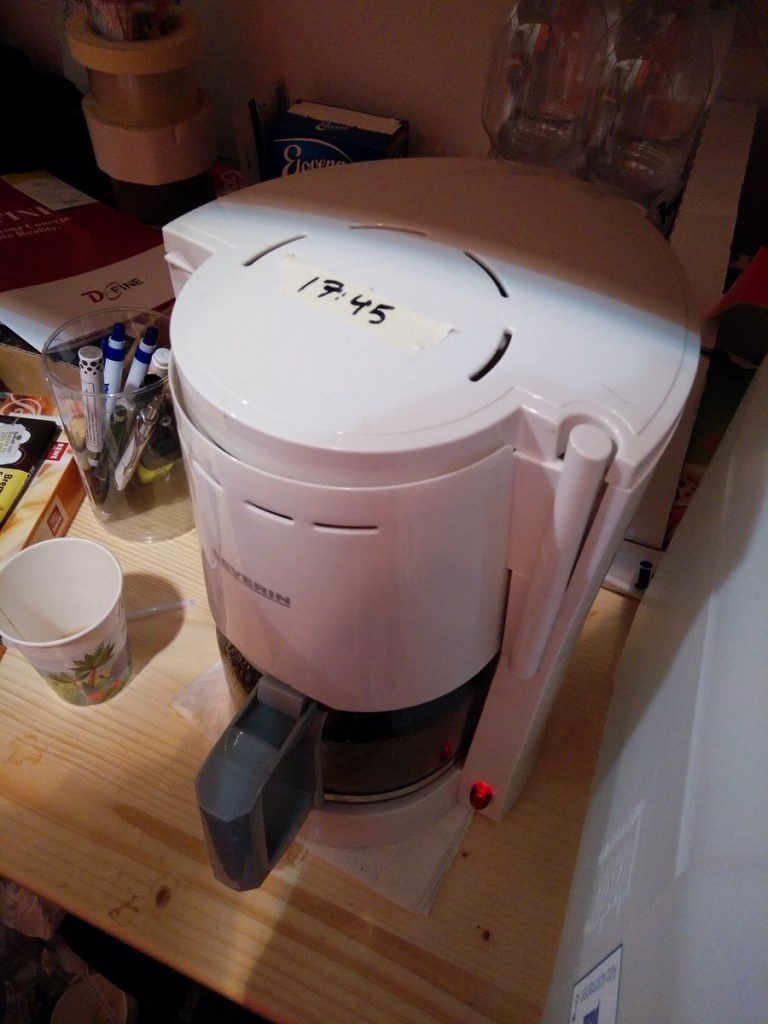 Myself Bernard and Anna settled ourselves into the stand, where at least some level of common sense was in effect as they’d sensibly installed a coffee machine for me. And then to commence this surreal adventure my first customer was friedemann friese. 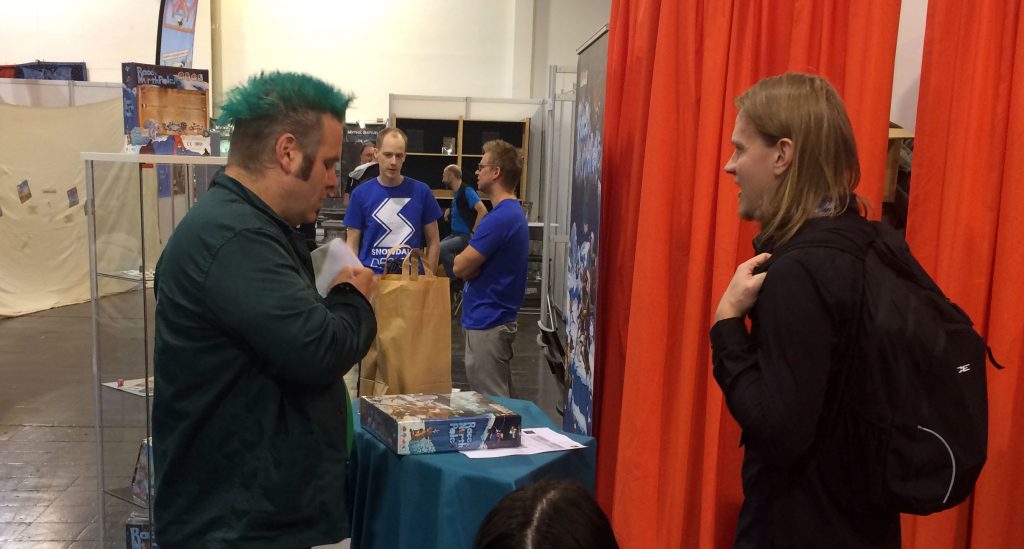 Now we pause for a quick commercial break from our sponsors. 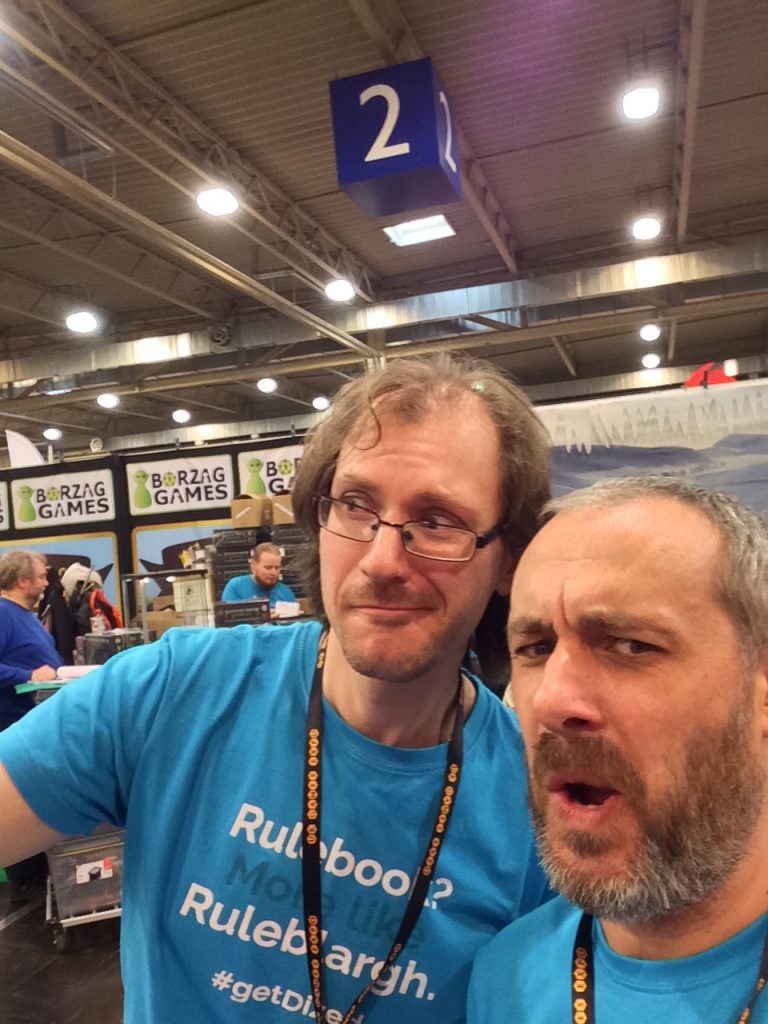 The Abbot and Costello of board game demos. 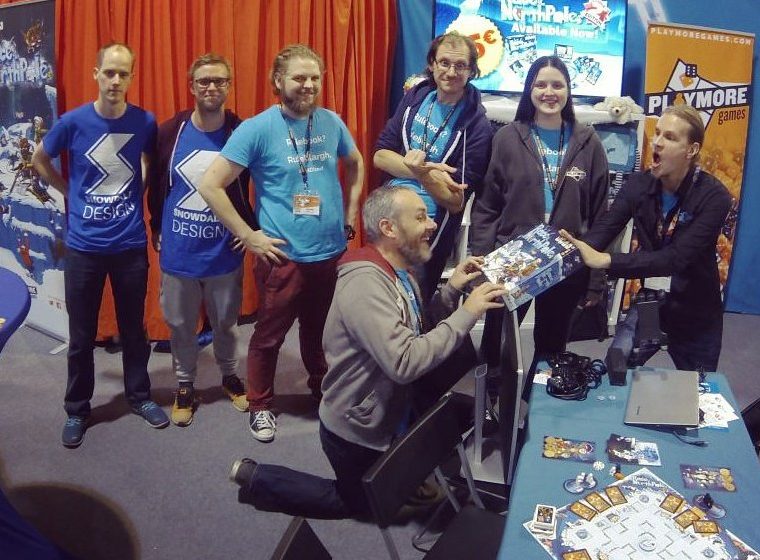 So Playmore Games and Dized, this would be my home for the next couple of days where we were demoing and selling the 2nd edition of Race to the North Pole a light but hugely enjoyable bit of hokum complete with the unique spinny board and upgraded meeples and components. Helping in this cause was the Dized app, which is essentially Rodney from Watch It Played assimilated into a tablet that will teach you a game as you play along. This made my job a breeze anyone wanting a demo I’d sit them down push the go button and let Gertrude and Roger (my pet names for the tablets) do their thing while I went for a fag, this demoing stuff was bloody easy they were even multilingual spouting German at bemused gaming tourists. And here’s something else German board game fans although incredibly polite good god they’re miserable. They march along like pallbearers at a funeral seat themselves at the game and silently judge the thing as if they are at the autopsy for a dead President. 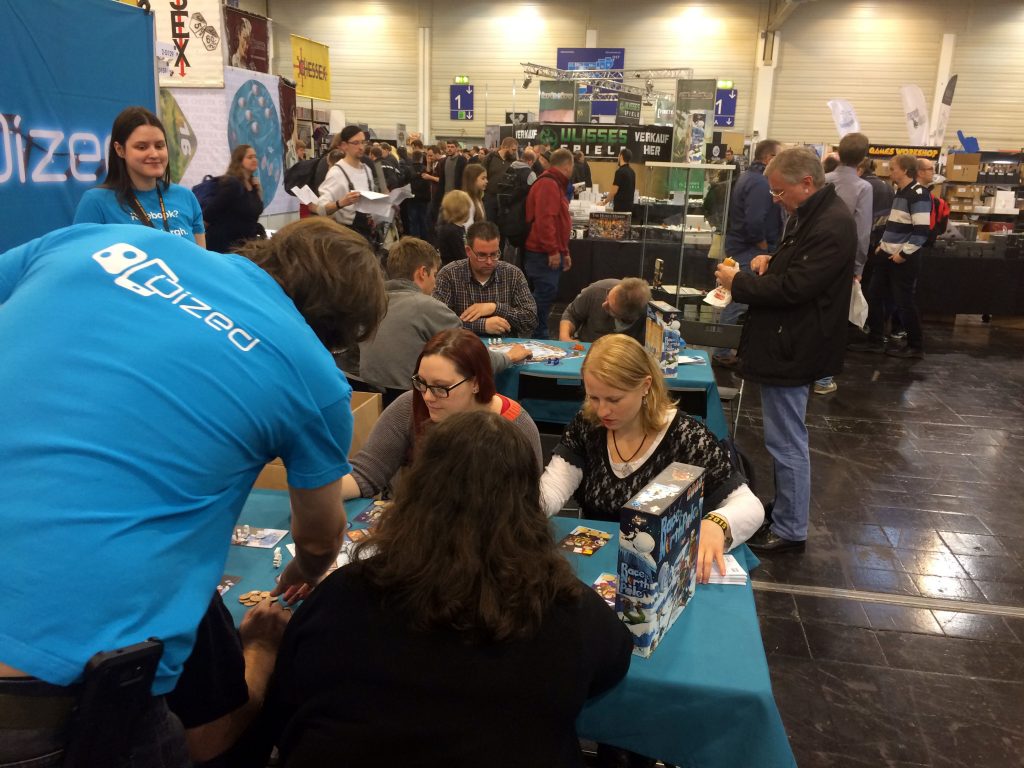 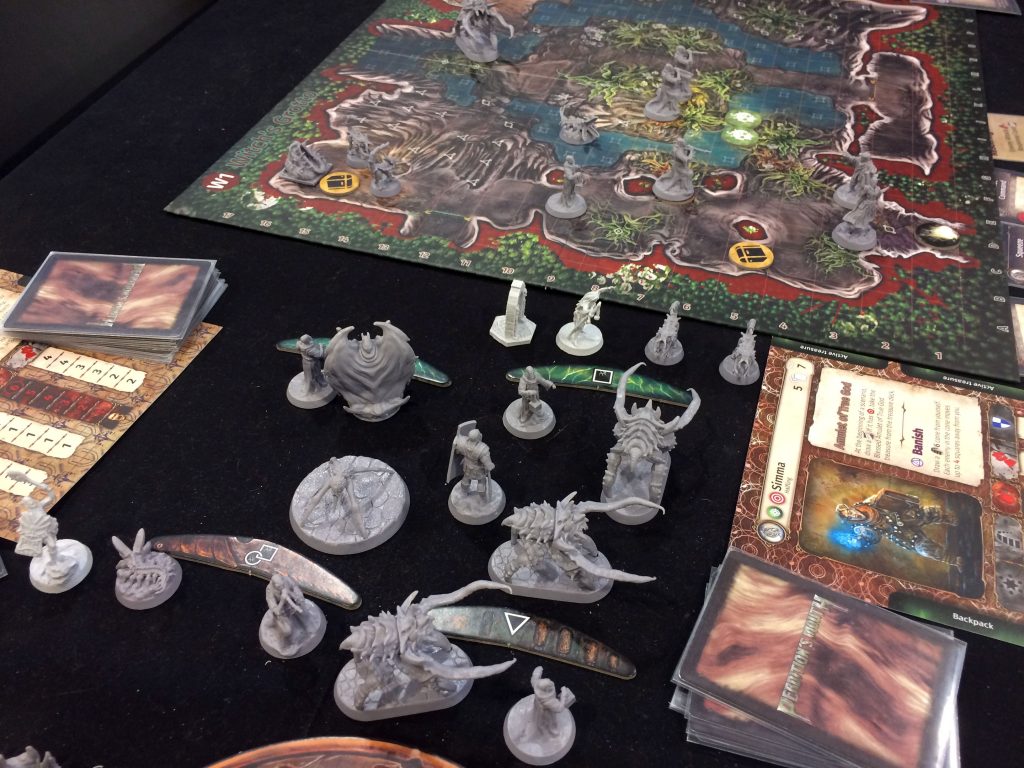 But that wasn’t my real problem no that was the stand opposite was also a Finnish operation being the Arctic Union guys with the stunningly cool Perdition’s Mouth: Abyssal Rift a huge box that literally weighed that of a Bear its ridiculously stuffed with oodles of stuff and I dribbled a bit when looking at it. The problem was it attracted a certain sort of gamer, and my view for most of the con would consist of rows of butt crack. It was like being stared at by multiple hairy-eyed cyclops. 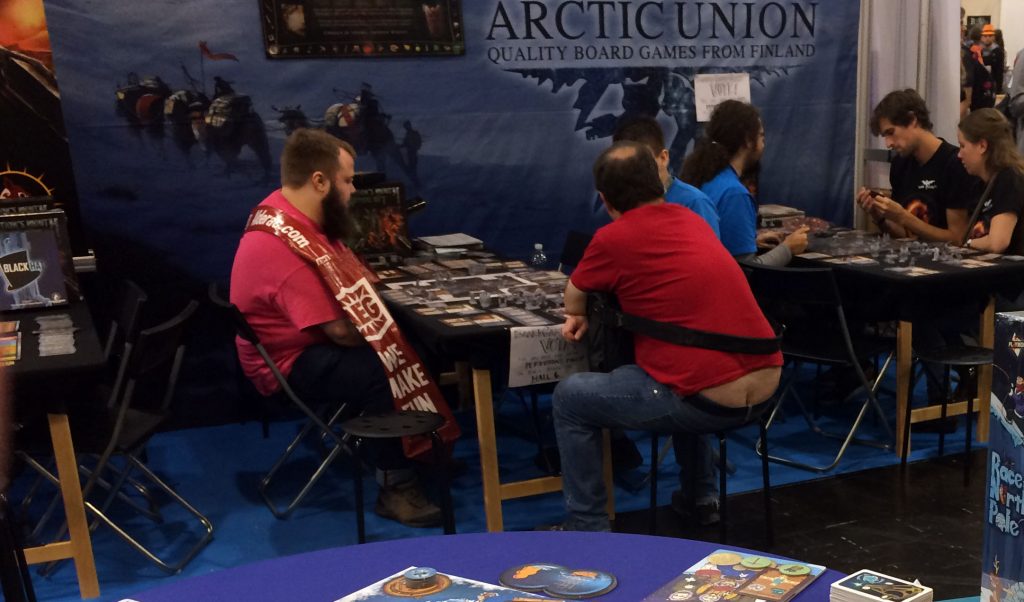 We rounded out the night by descending on the Sailors Pub which serves huge delicious meals (I would have taken a picture of my food, but Anna scolded me for acting like a 15year old girl) live music featuring some of the most bizarre caterwauling I’ve encountered outside of a Morrissey gig and a shortage of chairs. We were joined by other lovely peeps including James and Anne-Marte the team behind TableTop Generation a very cool industry networking site for designers and artists check it out it’s in Beta currently, but big things are planned and Ilja and Alina from Wurfel Reviews much fun was had and this being a Finnish affair much alcohol.
We ended the night in the Atlantic Hotel bar where I attempted networking through an alcoholic haze, confused Mike Elliott with Mike Fitzgerald (which was in no way awkward) before staggering off to my bed. 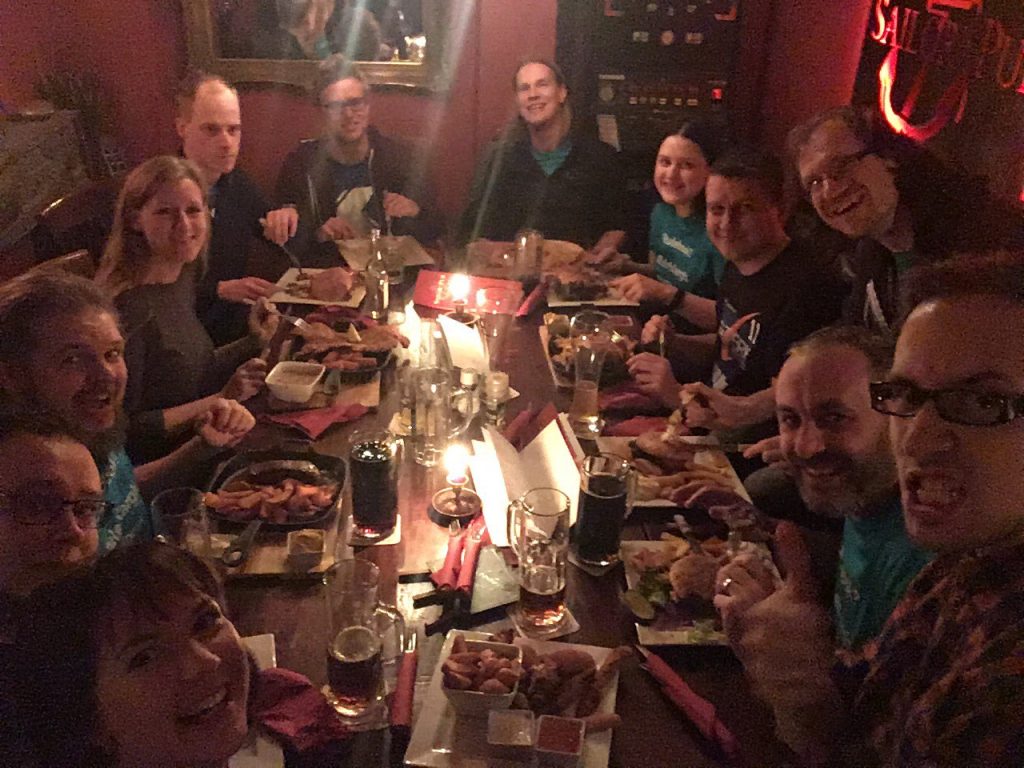 This has run on a bit, I’m tired, and it’s late. We’re be picking this one up again soon, and trust me you’ll want to tune back in as coming up we have. Eric Lang, Jager shots, German Kababs, booze, the German transit system and a race to an airport terminal, drink, Korean Game Professors, Rapey Panda’s and just maybe some games.