So the end is near… 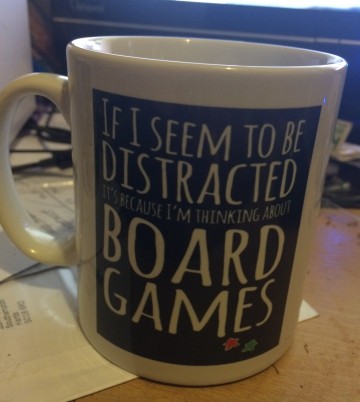 Yep old 2015 is already tearing down the tinsel and wrapping up warm for the January sales, coz you know, more games are always needed. It’s been a wild ride, Season 2 of Who Dares Rolls has been a blast and while personally I haven’t gotten everything I wanted to be done this year we’ve been pretty steady with content.

2015 has been a funny old year for games, at first glance it appeared lacking versus some of the Barnstormers we have had. On closer inspection I think because so much greatness didn’t hit until late with most launching at Essen we’re yet to really get to grips with just how much fantastic games we have had. It has been a year for innovative and controversial titles and I think the hobby is going to see some exciting changes following them.

We started strong this year with coverage from the London Toy Fair, which I’ll be heading to again in 2016. Despite the hobby’s growth, there wasn’t an enormous amount of companies touting the cardboardy goodness and it’ll be interesting to see if anything changes in 2016.
We then travelled to a galaxy far far away with a review and podcast episode dedicated to Fantasy Flights Star Wars Imperial Assault, I thoroughly enjoyed my time as evil Sith Lord leading my Imperial Forces to crush the puny rebellion. Might they strike back in 2016 when we Return to Hoth?

Charlie came onboard in March with an abundance of RPG articles and he’s been a godsend in keeping the content flowing when I’ve been snowed under, he’s also added a delightfully filthy but informed embellishment to the podcast. While his arrival was swiftly followed by the site getting hacked he was forgiven and he very nearly broke it again with his Apocalypse World review that resulted in the most ever hits we’ve had in one day.

April gifted us XCOM from Eric Lang, and the gaming world lost its shit over Apps in games, and then we didn’t see anymore fortunately the hobby survived. Which reminds me I haven’t gotten XCOM to the table in an age so I might just have to give that one another spin.

May brought us my favourite point in the gaming Calander, The UK Games EXPO, this was a tremendous year and I think foreshadows what I hope will be a massive event in 2016. Ignacy from Portal visited us and it was fantastic to see what he had up his sleeve for 2015 with Rattle Battle, Stronghold 2nd edition and those pesky Atlanteans. He’s returning in 2016 and it’ll be exciting to see what he brings along this time.

Forbidden Stars from FFG dominated the summer and I loved it’s deep tactical choices and abundance of shiny trinkets, this is another one that is overdue more table time, so I’ll add it to the list.

Gen Con happened with Blood Rage and Codenames igniting the hobby into a froth of hype and excitement. Ashes hit from Plaid Hat and managed to be a handsome and fun card game that I don’t think has garnered as much love as it deserves.

Later in the year, we managed to nab Jamey Stegmaier for a chat about Sythe in advance of its massive Kickstarter success. And then Essen struck in October and saw two games released that have split the hobby asunder.

Pandemic Legacy has been the subject of much ballyhoo both off and on the table, I’m going on the record now to say that its has been my most enjoyable gaming moment of 2015. With its refinement of the Legacy system and it use of story to tell a riveting tale, it’s a unique and amazing look into how board games and the worlds of RPG’s may combine.

Time Stories with its one play and done format and perceived day one purchasable content has seen its fair share of abuse. I’ve played it and can say it is a hugely entertaining experience, you should seek out a play before writing it off as this feels very immersive, innovative and was just a damned good evenings gaming. Whatever your opinions on its release model I urge you to beg, borrow or steal a copy to see what all the noise is about.

I promise to review both in the new year and publish the remainder of our Pandemic Dossier. Aside from those two 504 further pushed the envelope in design and innovation and appears to actually work, I can’t say it’s one I’ll ever pick up as I have barely time to play my current collection but we tip our hat to Mr Friese.

And then we topped things off with our now traditional Very Grumpy Christmas podcast episode.

Behind he scenes it’s been hard going, working long hours has made accomplishing everything I planned impossible, I have a heap of reviews half written or barely sketched on napkins awaiting eventual release.

One gaming fatality that still has a weak pulse is Black Box games and the wonderful Lords of War series that we’ve been supporting since we both took our very first baby steps in the hobby. Martin from Black Box has put his all into making the game the roaring success it’s been and it’s deeply saddening to see all that it is potentially be lost, here’s hoping that LOW can emerge like a Pheonix from the ashes, the EXPO will just not be the same without him around.

Ben has been absent from the latter half of this year as he has recently become daddy to a little girl Ada, once he gets some sleep and sorts his priorities out he should be back with us.

So that’s a glance at our year and here’s looking forward to the next one. There’s a lot to get excited for might Seafall finally arrive and then there’s Dead of Winter 2, and I’m sure FFG have some Star Wars related Geekgasm’s that they’ll awaiting to deposit at our slavering feet. And of course I have plenty of plans for the site, but there’s time enough to discuss that, we have the whole of next year to do that.

To all our listeners, lurkers and lollygaggers I wish you a Merry Christmas and a Happy New Year.

Who Dares Rolls Podcast 51 – Where is my Mind?

Who Dares Rolls Live at UK Games EXPO 2017
Be the first to comment!
Leave a reply »