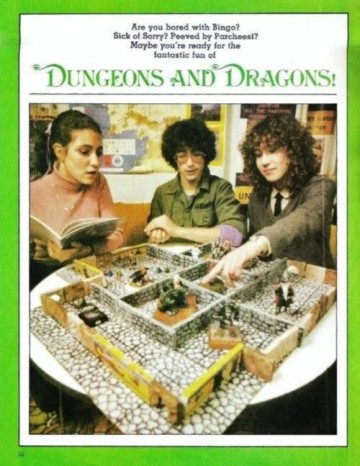 The Cult of the Dragon are jerks! They robbed a ton of towns and the group need to know where they’re headed next. Now they’re half-way through a dungeon complex being used as a hatchery for dragons. It’s been filled with traps, the latest of which is in the way between them and a dragon-dog barracks. 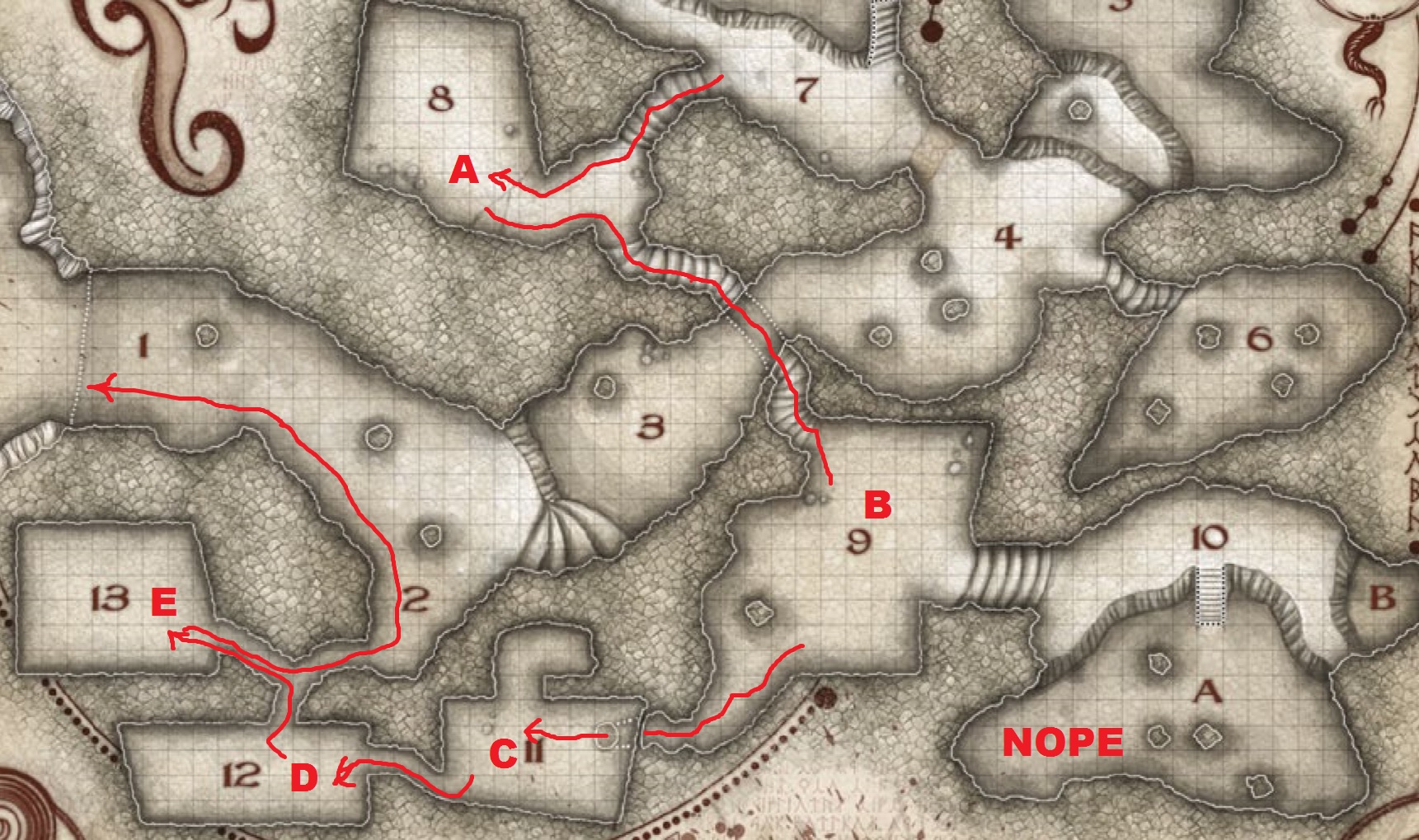 The dragon-dogs in the barracks (POINT A) are on high alert as they’ve been hearing the noise of traps being sprung, hallucinating gnomes and fights with fungus. Stealth isn’t likely. Dressed as a cultist now, Willen decided to try and appear like one of the cultists and bluff the dragon-dogs. The group made their way over the trigger for a rolling boulder trap, down the stairs and tried to lie to the dragon-dogs. Even with advantage on the roll, Jacob rolled a 1 and a 2 on the dice. Oh dear. The dragon-dogs knew about all the noise, they knew almost no cultists were left and were able to deduce that this was a trap.

Gatt jumped up onto the moss on the ceiling, Joggi disrobed to try and scare the dragon-dogs, Mockingbird tried some flashy fencing. The group were dispatched fairly quickly and with all the noise, the sleeping guard drakes the group walked past woke up. Gatt had made the boulder trap set to trigger if anyone went over it and crushed a guard drake under rocks. The other one was okay but now there was so much debris in the way that the group really couldn’t go back the way they came.

The dragon-dogs were thwarted and Gatt was sent down into a tunnel to Point B (that bit on the map is a tunnel which goes under where they walked through last session). He saw a huge altar in the shape of Tiamat, carved out of black stone, a treasure chest underneath it. Lurking in the room was Langdedrosa, who had so easily beaten up Gesh in session three and a couple of berserkers. He screamed and summoned the rest of the group. Well, Gesh. Mablung and Willen decided it would be smarter to hide in the tunnel and attack from a distance.

Gatt fled and Gesh charged at Langdedrosa, eager for a rematch after his whupping last time. To his credit, Gesh lasted about a round longer this time. He did suffer 28 damage and hit the floor, leaving the cowards of the team to help out. Mablung engulfed him with a scorching ray, Willen lit him up with purple glowing fairie fire and the pair managed to eventually defeat him.

Joggi went to help Gesh but his dwarf instincts (or a lack of player attention span) kicked in, so he drank the healing potion he was going to heal Gesh with, then smashed it against a wall as a weapon to use against his enemies.

During this exchange, Gatt fled up a rope ladder and into area C, which was the personal quarters of Frulam Mondath, the general of this section of the cult. She wasn’t expecting anyone clambering up the secret entrance to her home and was in the process of packing up.

Gatt had suffered quite a bit of damage previously and for a little monster whose main motivation seemed to be random murder sprees, he ended up admitting, “I’m okay with NOT murder.”

Frulam said, “Me too,” drank a potion of invisibility and left, proving that evil (in this case both Frulam & Gatt) is smart. And also terrifying, hence this picture 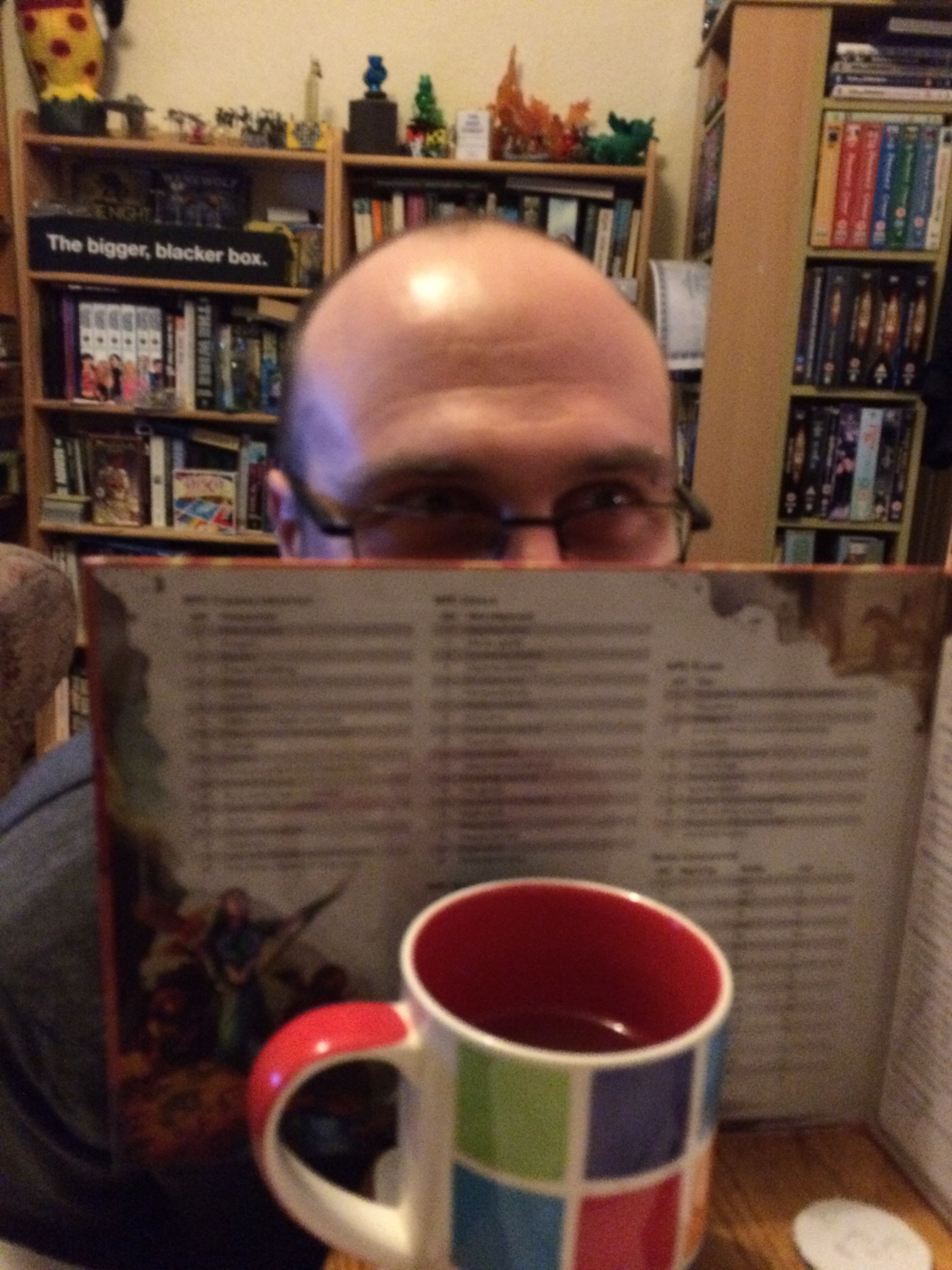 Back in the fight, Mablung channelled his wild magic to sire another scorching ray and grew to giant size, stuffing up the tunnel he was hiding in. Gesh started using magical spells (oh yeah, for a fighter, he actually gained spells when he last levelled up!) sending sickening rays at the berserkers. Willen mocked one of them to death, causing him to vomit his guts up after Gesh’s attack.

Willen tried his stupidest lie yet, trying to convince the berkserkers that Langdedrosa, who had been murdered in front of them and whose body was still fresh on the battlefield, was alive. I forget why I let this slide, I assume it was D&D mentality winning out and because ‘technically it can be done’. It was stupid though and did somehow work. Stupid berserkers. This left them open to attack. The final two berserkers fled through Frulam’s bedroom, possibly to open an antelope farm together.

The group had been a bit banged up from all the fighting, so when they found Frulam’s room they decided to have a rest. During this time they found a few things. Apparently Frulam was infatuated with dragons and wrote page after page of really terrible dragon-based poetry. Tumblr-bad. There were doodles as well. There were a few military-looking books but surprisingly little loot. The main quest item in the room, however, was a map showing where the cult were travelling to. Apparently they loaded up a caravan with all the treasure from nearby towns and were travelling west to Beregost, where they would head up The Coast Way to Baldur’s Gate, then Waterdeep and to Castle Naerytar in the Mere of the Dead Men, which sounds really inviting.

The group would need to travel to Elturel and explain this to Onthar Frume and their mate Leosin. The pair of quest-givers also had their reward for conquering this dungeon.

Gatt remembered he’d let the boss of the cult go and explained this to the group, which they weren’t too keen on. He also went for a bit of an explore in Point Nope on the map, which I had dubbed, “The Cronenberg Room.” He peeked inside and through the darkness he could see people strewn all over the place, bodies bulging with horrendous new life. Some of them burst open, spewing forth dragon-dogs and guard drakes. The rituals of the cult had turned any victims or unwanted mercenaries into new monsters. Rather than go in and fight it, he decided to quietly leave.

At Point D, they used an illusion to make Gesh look like an allied dragonborn and Willen did all the talking for him. Gatt found the remains of the vault (Point E) which had a guy who could easily be talked into leaving the scene and making a new life for himself. So of course Gatt had to kill him.

They were free of the dungeon and had a long ride to get to Elturel before the next part of the quest. We called it a night and the group levelled up. Next up we have a glorious distraction from the adventure, Liftron the Magnificent and the start of a really long adventurer’s road trip. 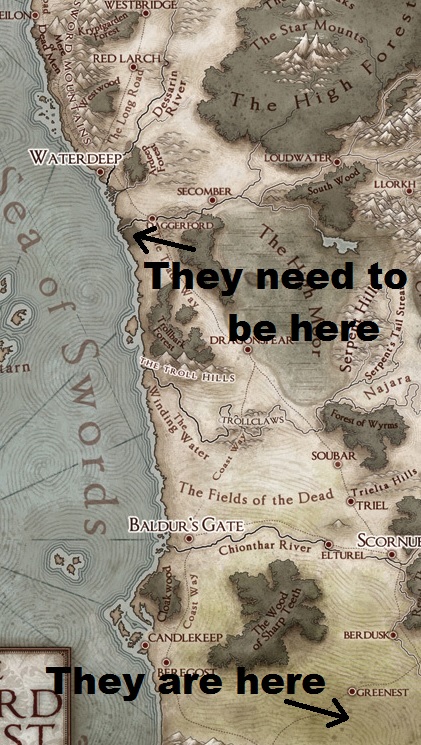 Death at Two and a Half Feet! Hoard Of The Dragon Queen Episode Seven

“Liftron Elfcon” Hoard Of The Dragon Queen Episode Six, Part Two
Be the first to comment!
Leave a reply »