Not so tiny but certainly epic. 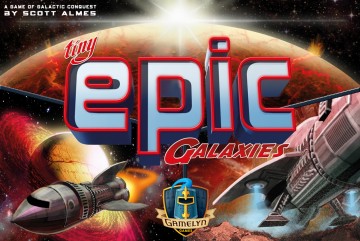 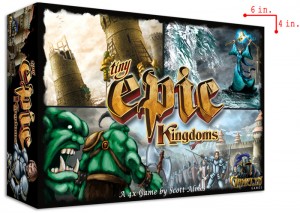 Gamelyn games have been building anticipation for their next release in the Tiny Epic series  Tiny Epic Galaxies for a while, back at the start of 2014 saw their first big(small) release the original Tiny Epic Kingdoms which offered the 4X/Euro game experience of its big box cousins but in something a fraction of their size. That idea proved rather popular with gamer’s, so much so that the project went on to storm to just shy of $290,000. Its followup Defenders maybe looked that interest had cooled on the concept falling short of the originals funding but still achieving a very respectable success.

Yesterday saw Michael Coe of Gamelyn Games hit the big red shiny start button on his new project Tiny Epic Galaxies, i’m sure this moment was mixed with equal parts anticipation and terror, launching your new baby out into the universe like Marlon Brando in Superman is always going to be a moment loaded with self doubt, what will the masses make of it, will anyone come and see, will he fly? Well the masses answered with a resounding Please Sir, Can I have some more! Warp jumping the project to over  $100,000 in the first 8hrs! And not a Gene Hackman in a bald cap to be seen anywhere.

Designed by Scott Almes the gent responsible for the two previously outings looks to have his finger on the gaming pulse, taking the already hit series and expanding it out to the stars.Combining the thrill of dice rolling and engine building the game uses some clever mechanics of combo-ing your dice rolls to choose when to take actions and use the abilities of planets in your empire. Players can also use banked resources during the active players turns to follow their moves allowing for some deceptively deep thinking  and choices from a itty-bitty game, this means nobody is ever sitting out waiting for their next chance to go, but often looking over their shoulder at what everyone else might be planning on theirs.

The game is live on Kickstarter now and is available in either the standard game for $16 or the deluxe at $24 and lets be honest deluxe is the way to go as it adds an interesting push your luck element to the base game called Super Weapons! who doesn’t want one of those. Shipping is extra but is very reasonable and happily its all very EU friendly.

This has already blasted through its early stretch goals adding more planets, component upgrades and secret missions. With nearly 30 more days to go who know’s whats to come, a 5th player is on the cards (yes please) and a SOLO option.

It looks like Kickstarter is still going strong in 2015 and Gamelyn have a run away success on their hands I’ve strapped myself to this particular rocket ship and i’m ready for one heck of a ride.