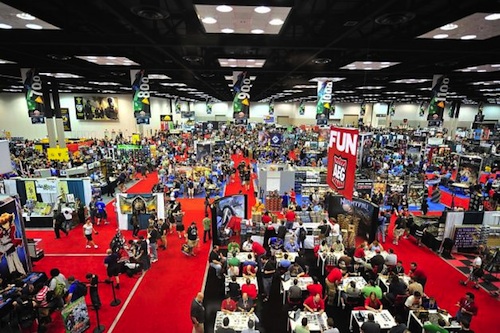 So Gen Con happened last week. If you don’t know what it is, well allow me to bring you up to speed. Gen Con is one of the biggest gaming conventions around and takes place every year over in the good old USA and has done for around 40 odd years.It was bigger than ever this year with 159,000 attendees, that’s a lot of geeks in one room (must have smelt like the inside of a plimsoll)

As the Who Dares Rolls budget can barely stretch to a pack of biscuits – we didn’t go. (one day, one day).

So instead I’m going to list for you the highlights that I have seen from trawling through numerous pod casts and web sites and bring the stuff that I think is going to be hot and should be on your radars.

So lets get one of the big geek one’s out of the way straight off.

So yeah if you were on the convention floor this is pretty much what you would have seen. But they have announced some big expansions for the X-Wing Miniatures game. I have only recently dabbled my toe into this and a full review is forthcoming. For any Star Wars geek this is like cat-nip (really expensive cat-nip).

They announced the launch of the new wave of miniatures and two new capital ships. The Blockade Runner from a new hope and a Rebel transporter (in case you don’t get it from the pic these things are huge). This game is very easy to learn and fast and really has the feel of the trilogy’s dogfights – these coming to the table boggle the brain (and the wallet – your looking at $80 price tags). I want a star destroyer.

Eldritch Horror is a sister game to the popular Arkham Horror board game. First impressions seem to imply more of the same but on a global scale as your investigators travel the world taking on various horrors and dying a lot. Â Its gonna be huge – and might be my first dabble in FFG’s Cthulhu universe.

Battlelore 2nd edition was announced. Its a 2 player miniatures based war game (itself based on the memoir 44 rule set) this has gotten a bit of buzz if nothing else to the massive pile of miniatures you get in the box (92).

Lost Legends from Queen games – was a kickstarter the tail end of last year. This is a mash-up of euro and card drafting in a fantasy theme where you are all competing to kill the most monsters and get the biggest stash of victory points. Its been getting very positive word of mouth from anyone who played it and has defiantly shot to the top of my radar. Me want.

Firefly the game. This looks a lot of fun. It sold out during the show and again has gotten some pretty strong word of mouth. Its a space trading game set in the TV shows universe – with a really nice look and oozing with theme. You get to captain your own ship and misbehave across the verse. Mines pre-ordered and should be hitting mid September.

I’ve yet to play Space Cadets but that looks a lot of fun. This looks even better as its a easier game to get into the same great idea but with dice. You and your friends captain a couple of starships and their various sections (engineering, weapons) in a duel. Really really liking the look of this.

Remember the old video game? Yep well this is based on it. Looks so much fun and again has gotten some great word of mouth. A light style game in the King Of Tokyo vibe – but in this you actually get to flick vehicles and blow over buildings to win. How can that not be fun – its on my list to get (me and the kids are going to love this)

Pandemic In The Lab more pandemic with the new update. I’m kinda sold already at this point. This should be out pretty much now. More Pandemic goodness with option of team play and the new lab board and rules. Looks a lot of fun.

Mascarade – From Asmodee is a light fun card game – my group does enjoy these. Lots of bluffing and memory has a definite Love Letter feel. This one caters for up to 13 players and with a big group looks to be a riot. Its out now and can be picked up for about Â£15 – if you’ve got a big enough group this is a no-brainer.

Castle Panic but with zombies – yeah kind off – but this is getting some pretty good word of mouth – Its a co-op game as you all hide out in a cabin as hoards of zombies come at you.Castle Panic is a lot of fun and this looks to be more of the same but with enough clever twists to make it worth a look.

That’s the main things that caught my attention and I like the look of. There were literally hundreds of other games that cam out and are on the way. Other games that are on the peripherals of my mind in no particular order – Nothing Personal (Tom Vasel he of dice tower designed game) , Coup (A reprint by indie games – recently successfully kickstarted – mines coming full review then), Star Trek-Attack Wing (x-wing for Trekkie’s), Robinson Crusoe.

So yep lots going on – and that’s not all Essen hits in October the European equivalent of Gen Con – This is another huge show which will see a ton more releases hitting. So exciting times keep playing and we’ll be back soon with some more reviews and news.

Eldritch Horror
Be the first to comment!
Leave a reply »