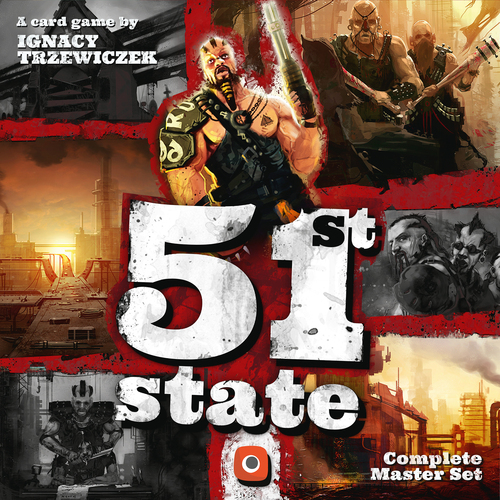 Great art and design and an absorbing engine building game that'll get the brain thinking.
Much less aggressive than Imperial Settlers for players that found that element off-putting.

There's the whole 'Master Set'/pre-order kerfuffle.
Essentially this is Imperial Settlers 2.0 and there might not be enough new here for owners of that game.
Can run long with the higher player counts.

Colliding the refinements and ideas that Imperial Settlers implemented and the thematically more absorbing post apocalyptic playground of Neuroshima together crawling from the charred wreckage rises 51st State. Its a more accomplished and thinky take on the same card play in a streamlined no-nonsense post apocalyptic game of economics and brutally violent repercussions.

So a quick history lesson for you, everyone got their pens and notepads ready? 51st state was the precursor to Imperial Settlers which subsequently was the remake of this game. Thematically they are entirely different beasts Settlers abounds with cutesy Romans and cuddly Barbarians while 51st State wallows in its grim, dark post-apocalyptic future of the Neuroshima setting.
The original iteration of 51st State had a dedicated following spawned a couple of expansions New Era and Winter and despite being quite popular was hobbled by a steep learning curve and impenetrability from being entirely icon led, resulting in it not being as popular is it probably should have been.

Settlers re-implemented the core mechanisms but junked much of the heavy duty iconography going instead with very tiny text directly explaining what the cards did. And proved to be much much popular. 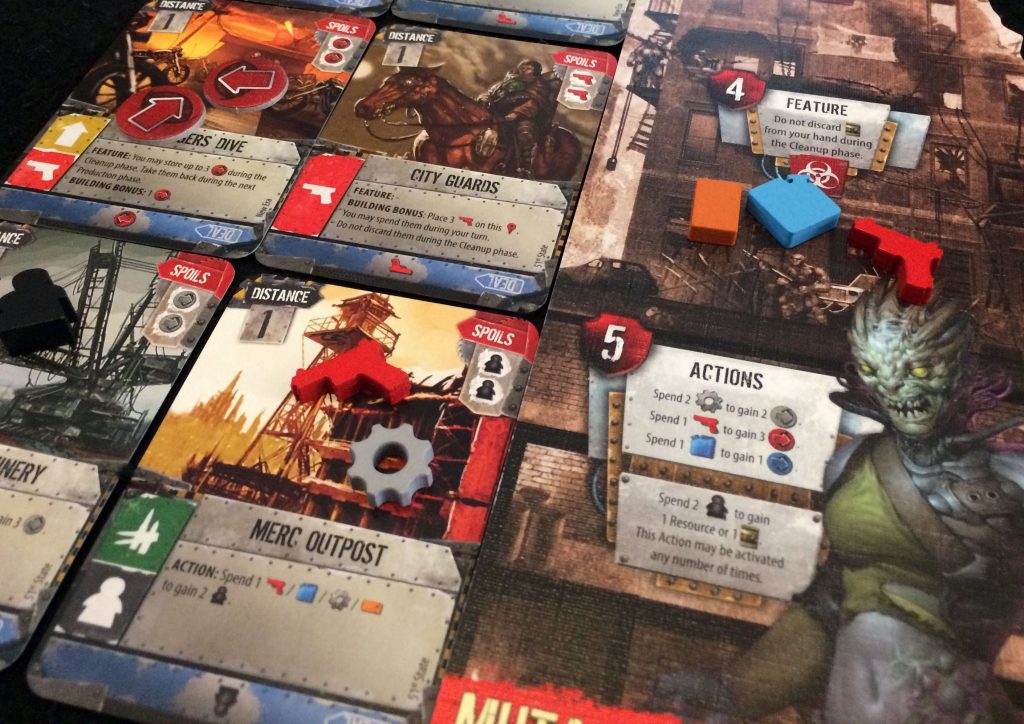 So now we have 51st State 2.0 which brings us full circle embracing all the good that Settlers introduced and then further refining that design offering a sleeker darker beast. Everyone got that? There’ll be questions later.

Much as I adore Settlers as its grown with expansions and factions, there has been some noticeable bloat and in particular with the Atlanteans some over-complication of what was initially quite a simple game. So this redux is a welcome return to the no-nonsense fun that first appealed.

So the first question is if you own Settlers or the original 51st State do you need this?
If you’ve been on the fence regarding picking up either than for the record this is a leaner version of both, Settlers is the more aggressive whereas 51st State’s charms lay in struggling to get an engine running with dwindling resources.
And while both games share core mechanisms there are quite a few noticeable differences between the two and how they play.

Now none of that really answers your question so, I would say if you own the originally 51st state, you’re looking at a more refined experience, it is essentially the same game radically re-implemented. 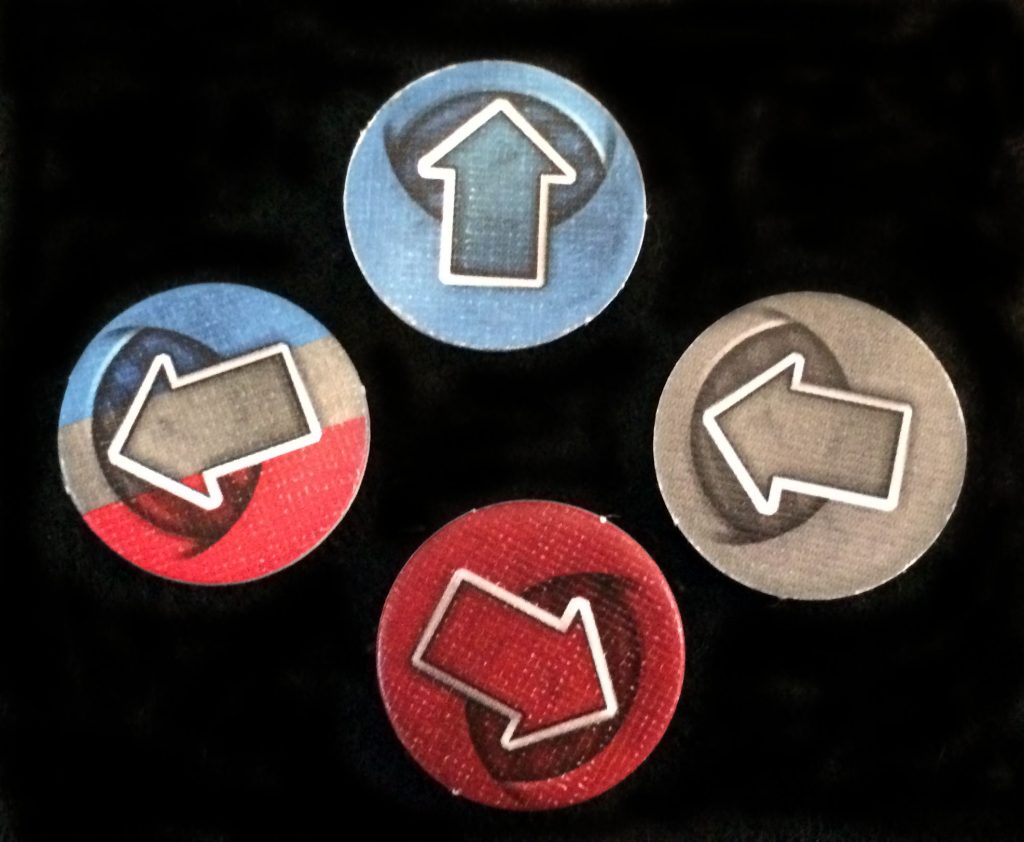 If you own Settlers, this feels a bit like the grunge metal cover version in State you take actions by using Contact tokens generated by converting the four primary resources found in the game. It’s sort of the equivalent of playing the piano with mittens on, it’s the same thing you know how to do, just a lot trickier to accomplish. Each of the four factions included unlike Settlers doesn’t come with their own decks. Instead, their player boards feature very subtle differences offering each its own delicate economy. Creating a very subtle asynchronous play. 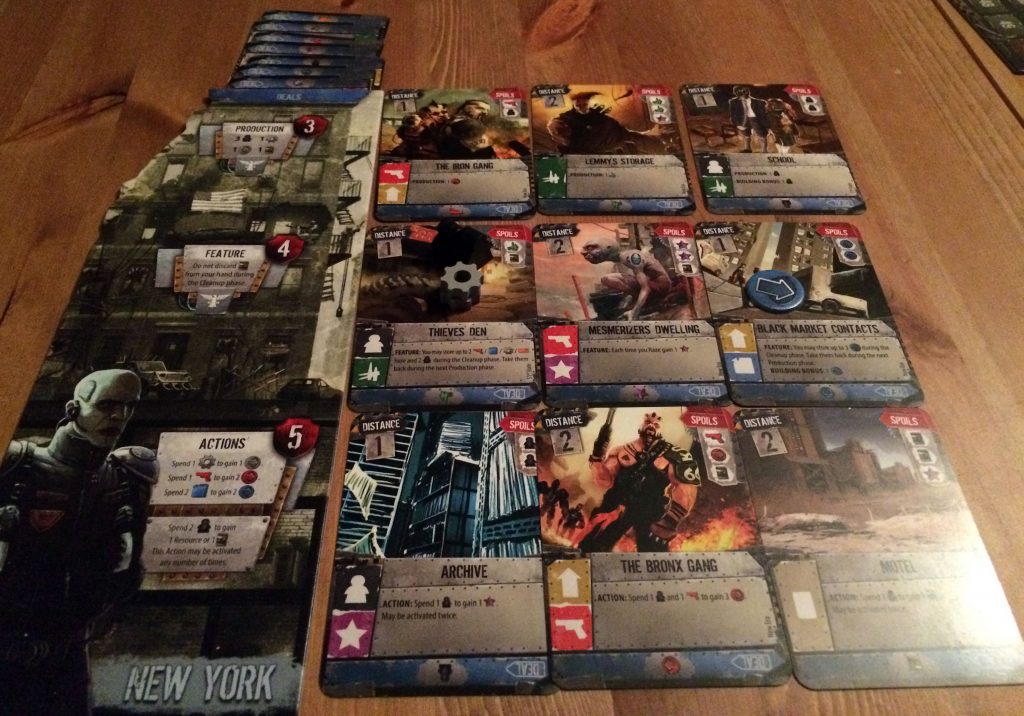 And aside from the theme, this micro engine layered over the main engine is the biggest difference between the two. Thematically it’s on the nose as we should presume that resources in the apocalypse aren’t in abundance after all all the supermarkets have gone and Amazon won’t deliver anymore.

The biggest divergence created by this Contact token generation means that this is a far less aggressive game than Settlers, everything is so hard fought to come by that each and every transaction you make is weighted with far greater consequences for the rest of that turn.

It’s not to say Attacks won’t happen they can and will but in much smaller numbers, it doesn’t lessen their impact, in fact, they are probably far more damaging than those of its cuddly sibling. 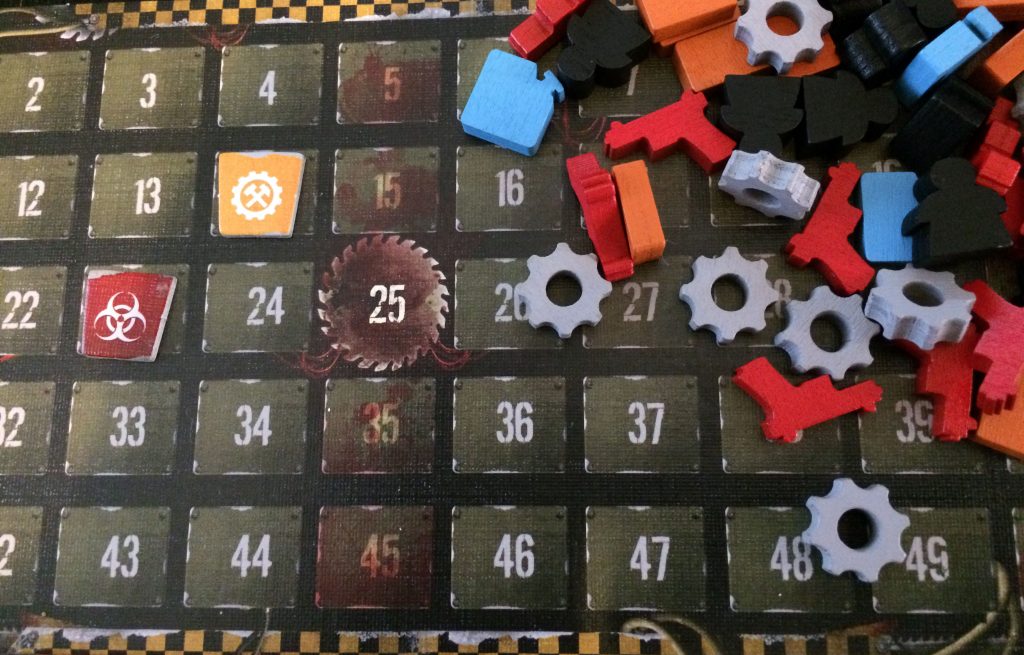 The final difference is in the game end trigger. In Settlers, there were the predefined 5 rounds that you were building towards, invariably meaning the last was a free for all as everyone scrambled to generate points. In State, you’re racing to assemble that machine faster than your opponents to turn it on and start churning out the VP to hit the 25 point limit and end the game. 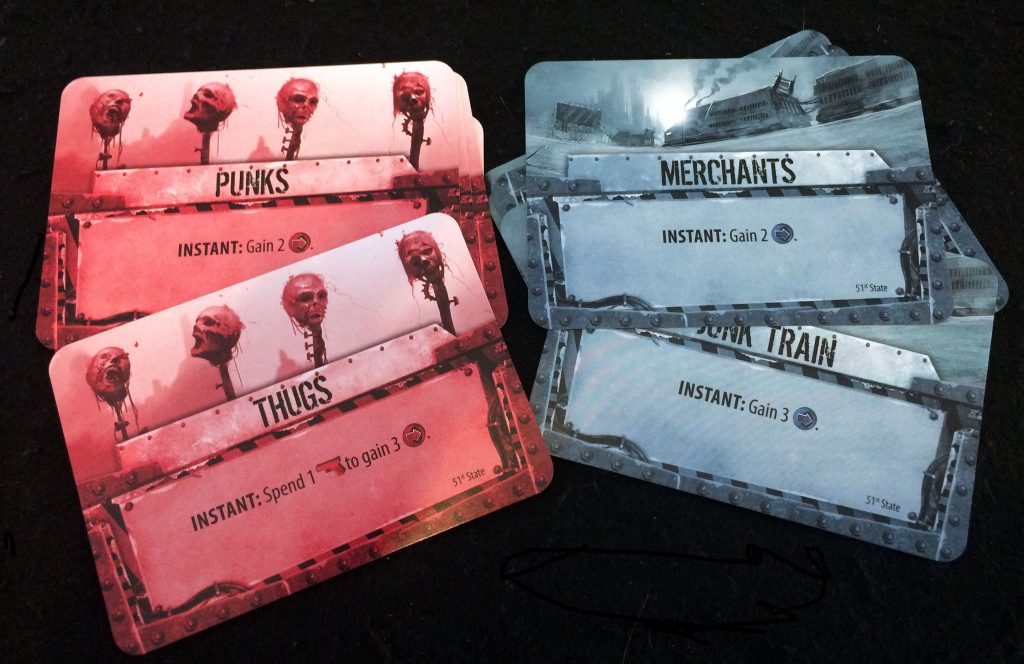 One design choice that’s a little clunky is the addition of the Contact cards. Two of these are available each round, and they either offer Blue or Red Contact tokens if you sacrifice two workers to take one. It’s more choice during your turn, but they feel a lot like a band-aid slapped on to fix balance issues, or bad card draws. They work fine and can be very useful, but it feels a bit ham-fisted I only really mention it as Portal’s games are nearly always very thematic story driven affairs, and this stands out like a sore thumb as a patch to something.

Components are all top drawer the cards are thick with a lovely glossy finish and the art although recycled is stunning in a grim and gritty way, the tokens and boards are substantial, and there’s a heap of cool looking wooden resources. 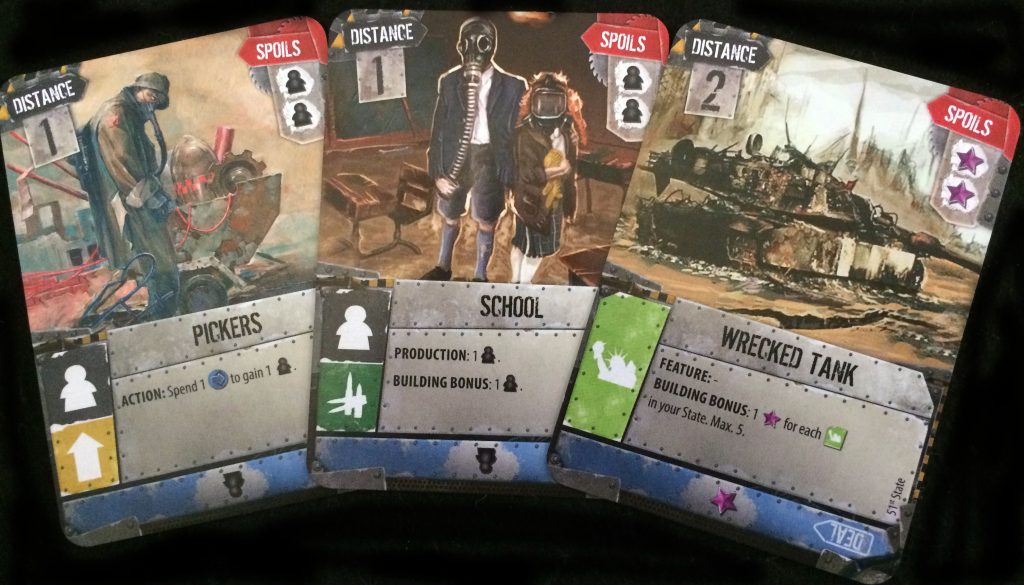 Included in the box are two smaller decks of the previously available Winter and New Era expansions one of which its advised is added to the core deck. Era seems more steered towards conflict and the related icon’s whereas Winter appears to nudge more towards collecting of resources, both add a tad more flavor to the base cards and more variety. 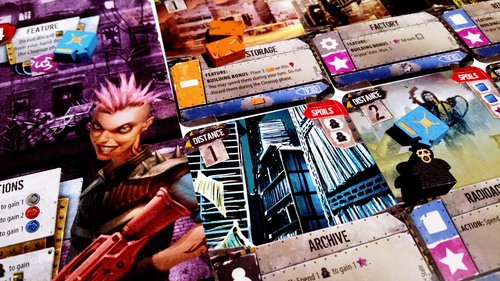 However calling this ‘The Complete Master Set’ is a bit of a misnomer. Anyone who pre-ordered received a chunk more content including two other faction boards and cooler components blatantly making the retail version, not ‘The Master Set’ it precludes to, and while the two expansion decks are included without them, this would have barely been a game*.
It’s not that your being shortchanged on content but when compared to say Millennium Blades and the wealth of options and variety that came in that box, or even the very similar named Summoner War’s Master sets that are bulging with goodies this feels a little light on content.

I suspect we have to chalk that one up to an incredibly poor choice of name combined with a well-intentioned but ultimately a resounding home goal on behalf of Portal. A mistake that hasn’t been repeated in subsequent pre-orders. 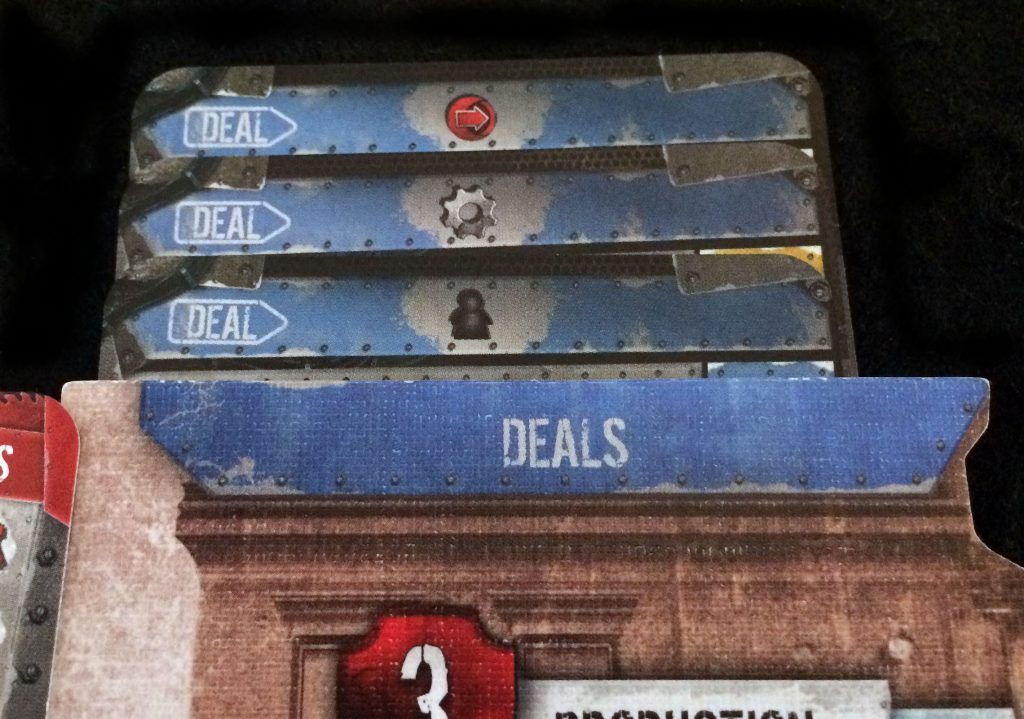 So summing up. If you don’t own either of these, then it probably comes down to which theme is more attractive to you and how aggressive your group is. Both are equally robust and enjoyable, but you don’t need to own the two. For me, I enjoy the more challenging engine building that the Contact tokens have added to the game, for want of a better phrase, this is ‘the thinking mans’ Imperial Settlers.

*And in the last couple of days much of that pre-order content has appeared on portals store, so if you are still feeling bitter about missing out, you can at least now get a majority of the bits you’re missing from your Master Set.

Portal Con News!
Be the first to comment!
Leave a reply »