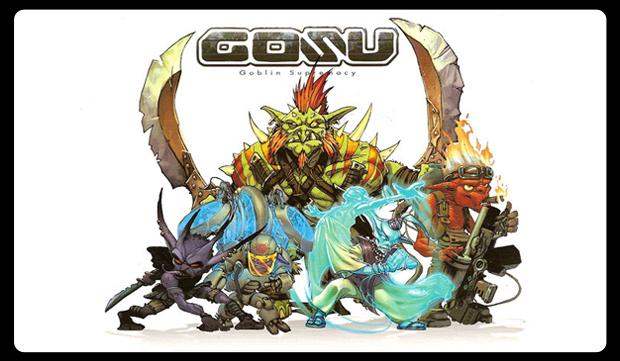 Sometimes you stumble upon a little gem by accident or by fortune.  In the case of GOSU, I stumbled across it because someone at The Works stuffed up royally.  I won’t go into too many details (it involved someone buying a large number of copies without checking the language it was printed in), but I ended up with a copy of this card game for free; a German translation guide and a lot of sticky labels.

GOSU (which stands for Goblin Supremacy) is a hand management game published by Moonster Games.  You are all chieftains fighting over the dominance of a fantasy world overrun with goblins.  You do this by trying to create an army larger than that of your opponents by the end of each round.  The first player to win three rounds, wins the game.

Each player starts with a hand of seven cards and 2 activation tokens.  The cards all represent the various goblins at your disposal and belong to one of five tribes – Ancients, Fire, Alphas, Dark or Meka.  Each of these tribes has a distinct flavour and special abilities that can be triggered through various means.  For example, the Fire tribe are often about causing damage to other player’s armies, whilst the zen-like Ancients tend to work around card manipulation mechanics.

The cards are further broken down into three levels – troops, heroes and generals.  This comes into play when building armies.  You can have a maximum of five troop cards in front of you.  You can also never have more heroes than troops; and likewise, cannot have more generals than heroes.  As anyone with a basic grasp of mathematics will tell you, this means that there are a maximum of 15 cards in an army.

Each turn players have one of four options – play a goblin; activate a goblin; draw or pass.  The first goblin put down (which must be level 1) at the start of the game is free.  Thereafter, goblins played may force you to discard cards from your hand in order to play them.  If you are playing a goblin from the same tribe, they are free.  A goblin from a different tribe forces you to throw two cards away from your hand in order to play it.  Some goblins also have abilities that trigger when they come into play.

Certain goblins have a mutation number, which indicates the number of cards that you need to discard in order to throw the goblin into the discard pile and replace them with a goblin of the same level.  Why would you do this?  This may open up different tribes for you to utilise but some mutations also allow you special actions.  The Explosive Fire Goblin, for example, makes sure that he takes one of your opponent’s goblins with him.

The second action open to you is the use of activation tokens to trigger the abilities of certain goblins on the table.    You place the token and do as you are instructed, but you need to be very careful about which goblins you choose as once your tokens are used, they are gone until the start of the next round.

Tokens can also be spent to draw cards.  This is important, as GOSU has no natural card drawing mechanism.  Every card you draw must be as a result of spending tokens or through abilities of the goblins themselves.  This even extends between rounds, as your hand will not automatically refill itself.  Marshalling your resources can be an integral part of the game.

The final action is to pass your turn and do nothing.  This removes you from the rest of the round, but does not stop other people taking actions.  If you pass early, your goblins are still vulnerable to the plays of others.  It is only when every other player has passed their turn does a grand battle commence.  The players add up the military strength of their goblins in play and the one with the highest score takes a victory point.  Three victory points wins the game.

The first thing you notice about GOSU is the quality of the artwork.  It’s marvellous.  The tribes all have their distinct look and even without the different colour backgrounds, it is easy to see the themes and associations that link the various goblins.  Each illustration is a character study of that particular tribe or goblin.  The Alphas look suitably brutal.  The Dark goblins are sinister and creepy.  Some may question the clash of styles – particularly the more modern looking Mekas and Fire goblins.  But that’s a minor issue – I am more than happy with the look.

I am a big fan of the mechanic of using the cards themselves as resources, which is not something I have encountered in a game previously.  Each round becomes a plan as to how you are going to maximise the potential of the cards you have in your possession.  Coupled with the limited draw opportunities, you need to work out what your optimal choices are each round.  Surrendering a victory point is a completely valid option in order to marshal your resources for a later turn.

As you only play with one deck and have one discard pile, there is also an additional layer of strategy to consider.  The heroes and generals are unique, so you can have a rough idea of where these cards are at all times.  There are cards that utilise the discard pile as well, allowing you to destroy opponent’s armies and turn their resources against them.  Knowing if other players have these effects on the board can influence the cards you are throwing away as well. 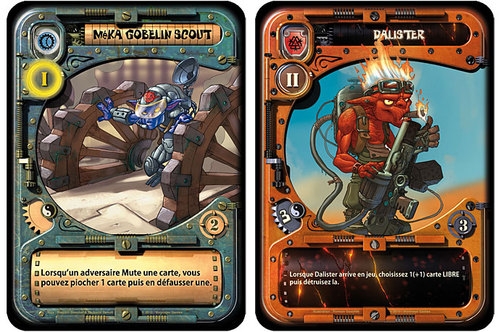 There are also several goblin card effects that only occur if you are behind on victory points.  This is a nice way to ensure that no one runs away with the game early on and the rest of the players cannot catch up with them.  It can also have the reverse result – no one wanting to stick their neck out too far out of worry of being a target for these cards.  I quite like this, as it creates a great deal of tension in the beginning whilst everyone is sizing up one another’s initial moves.

However, we do need to discuss a few of the games issues.  The game has a very simple rule structure, but the card interactions can cause problems.  Firstly, you need to be aware that there is a big difference between a new and an experienced player.  This is not a game you will pick up and be competitive with over a short period of time.  The number of options open to you through card use also means this is not a game for people with analysis paralysis.

There are also combinations to be found within the cards themselves, which are both a blessing and a curse.  I know that there are players who will be hunting out the various cards that work well together and through the game will try put the parts of the system into place, and they will get a lot of joy from this process.  However, this can result in long chains of events that other players cannot prevent or interfere with.  Whilst I have found no game breaking combos or infinite loops, sometimes you just want people to get one with it.

The pass option also offers up a problematic situation.  Once a player passes, there is no way for them to interact in the game anymore.  This gives other players a free shot at their armies with no retaliation until the round is over.  Any early pass may also leave you doing nothing, whilst everyone else is carrying on their antics.  It does introduce a degree of skill into when is the optimum time to call a pass, but there are situations when you have screwed up your turn and a pass is the only real option open to you. 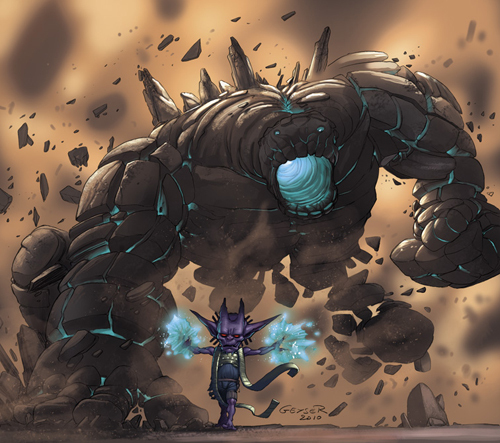 What you have at the end of it is a really unique game with some nice flavour, some flaws and a lot of mayhem.  Expect a big body count, as goblins care little for concepts such as self-preservation.  Working out how your army can be kept in its most stable format whilst simultaneously messing up your opponent’s forces will present you with a serious of genuinely hard choices to make.  You will probably have to gamble.  You will have to fight dirty.  And amidst all the chaos, you can hopefully come out the other side in one piece and on top of the pile.