This past weekend, I travelled across half of the UK to attend Airecon a fresh new upstart on the UK’s convention scene.
I’d never visited before but as it had moved this year into the rather swanky Harrogate International Centre now seemed the optimum time to check it out. 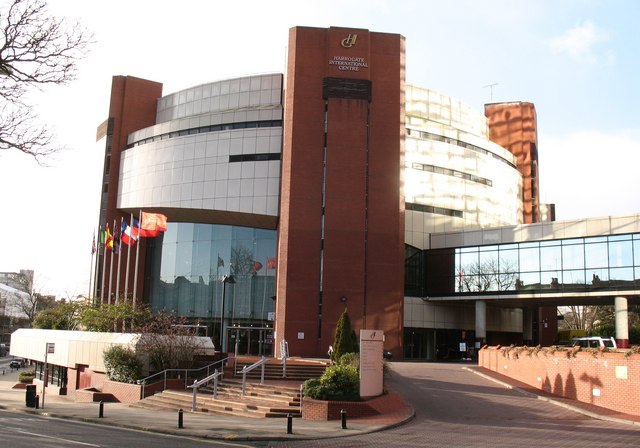 Considering Airecon is only four shows young I doff my flat cap to Mark and his team of organisers, volunteers and most importantly the coffee makers. predominantly Spread over one hall of the centre it represented the equivalent of a model village representation of the UK’s now prestigious UK Games EXPO and managed to offer more than enough open gaming space alongside a satisfying turnout of some of the UK’s best and brightest designers. Oh! and Paul Grogan. 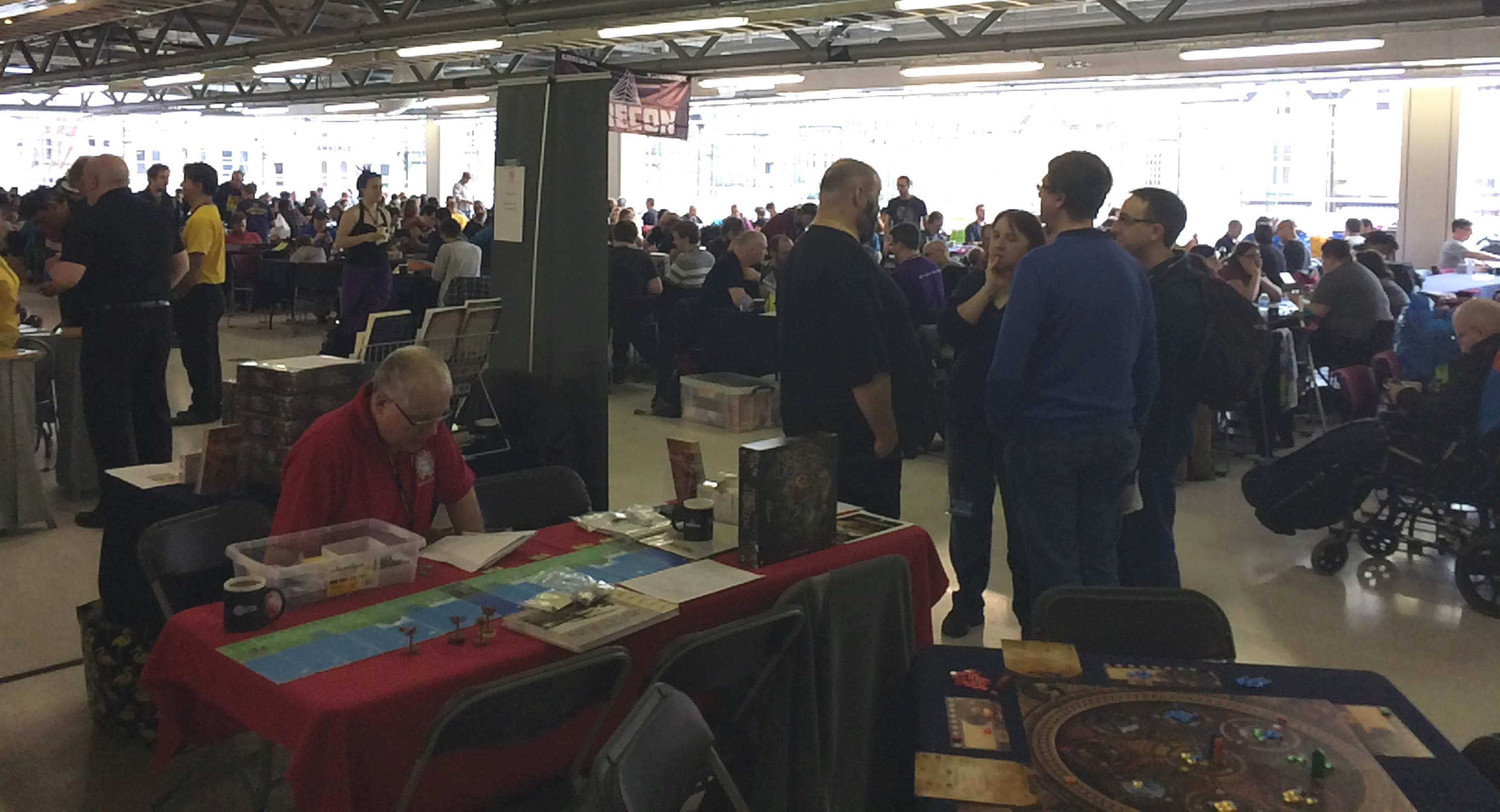 Upon arriving at the Con I made my most significant and beloved purchase of the whole event, my Airecup. This handy gaming accessory offered very reasonable top ups during the entire event and soon became my constant companion always ready to supply a gobful of energy giving coffee and never did he winge once. Best thing ever. I was even able to give him a name, ah. 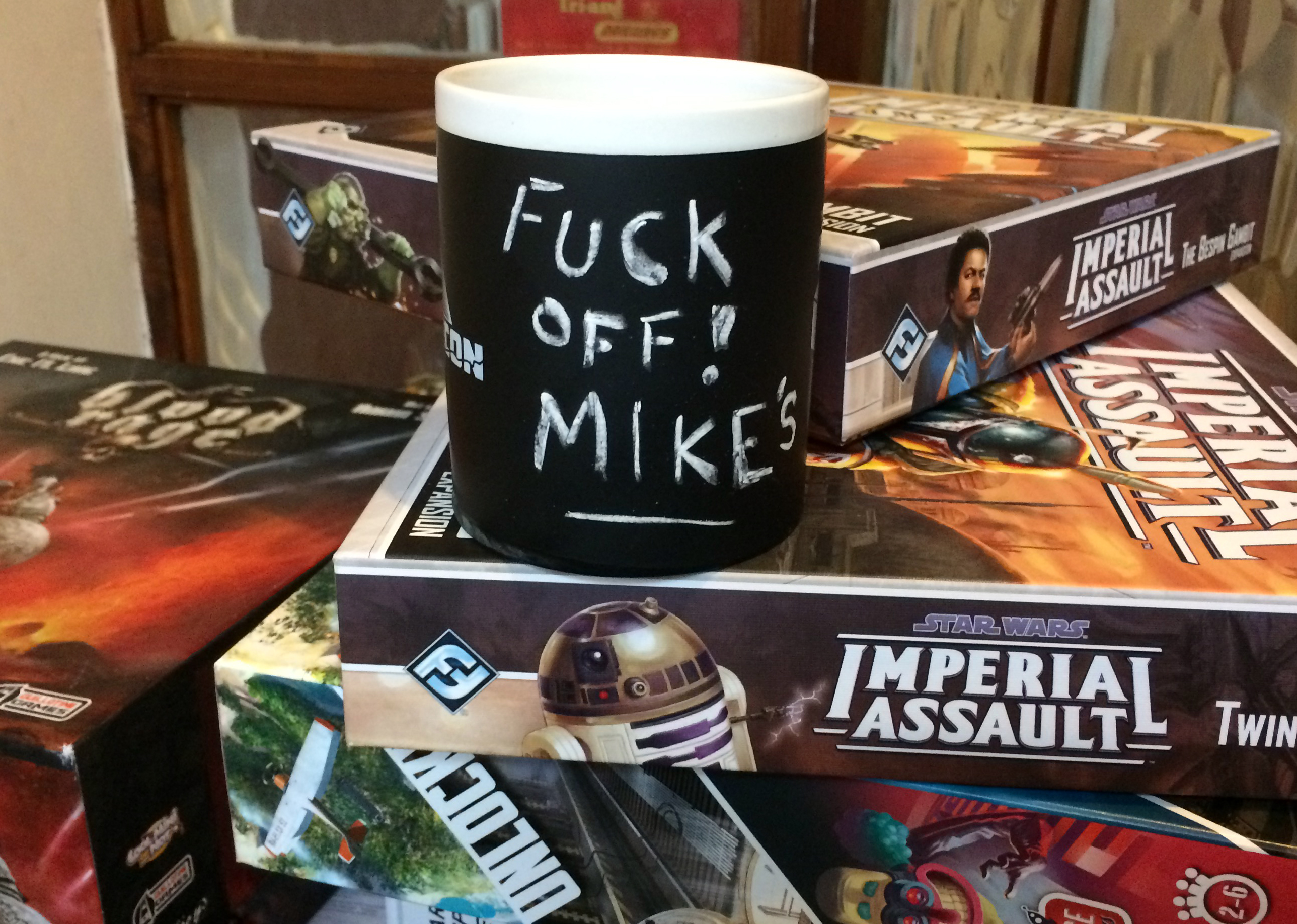 Within minutes of entering the hall, it was down to the serious business of board gaming when we lunged into a game of Viticulture with Luke from the Broken Meeple, Andy from Polyhedron Collider and his significant other. Being the gaming media professionals that we are the word cock was used at every opportunity, so distracted by this one piece of gaming paraphernalia that we promptly managed to get rules wrong in a glaring display of ineptitude that would have reduced Jamey Stegmaier to tears. 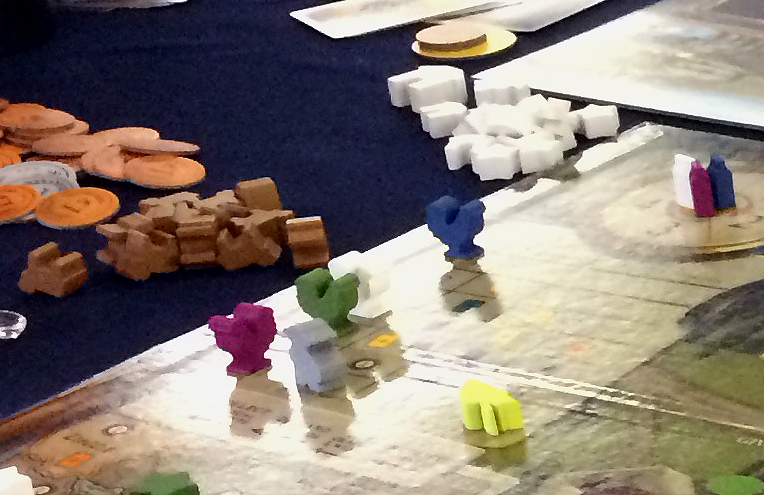 The entire experience wasn’t helped by Hector who throughout the process was snapping shots from his camera and rudely was barely listening to the heckling and abuse that was being thrown his way. 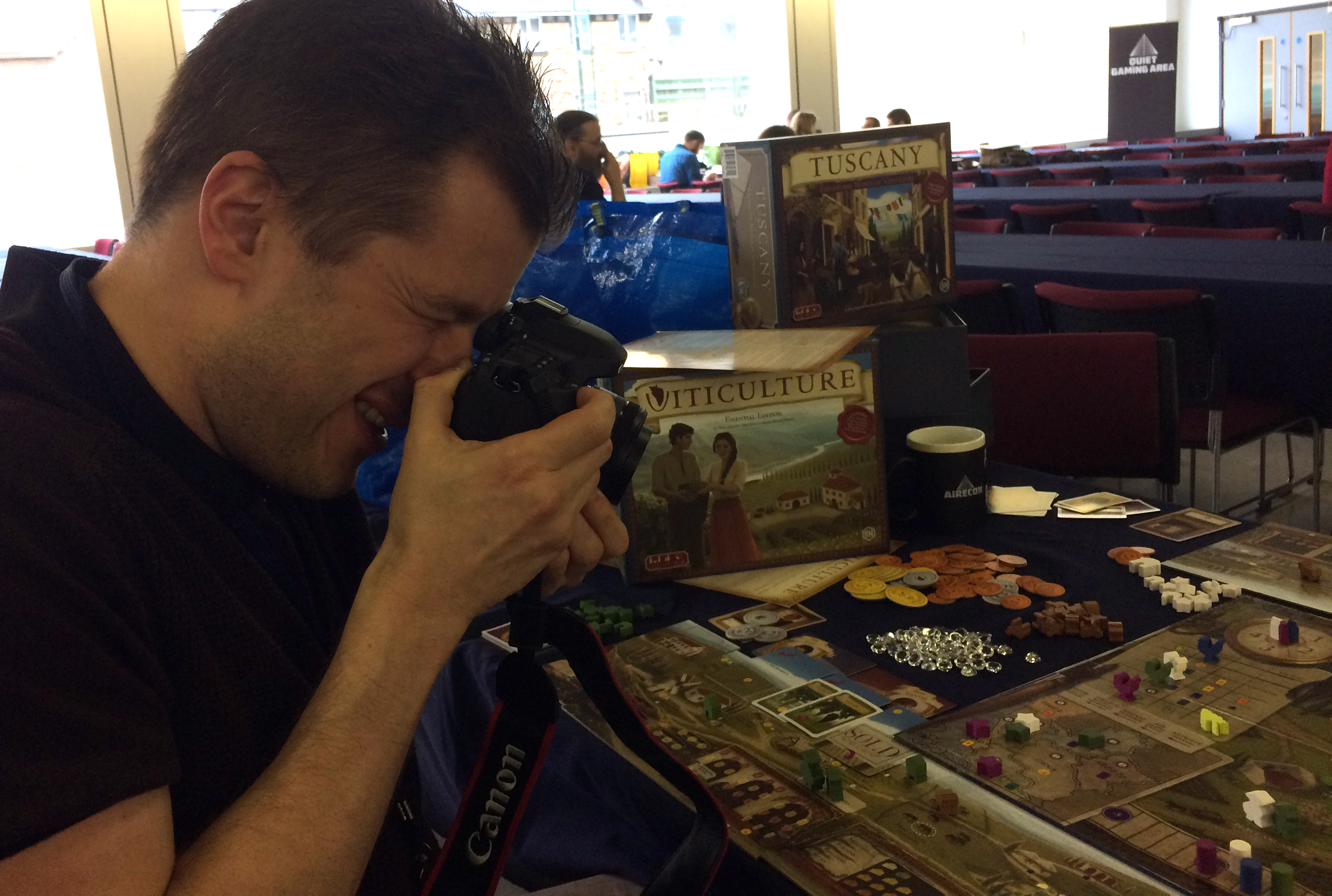 Having to wrap up that with minutes to spare it was then time to prepare myself for the live panels and the Room 101 discussion. While we settled ourselves down and stared at the lone person sat watching us in bemused silence we waited patiently for Paul Grogan to be brought in on his litter followed by his legion of fans.
That all went lovely and then as expected later that day our legions of adoring fans took to social media to commence the process of character assassination whinging and shouts of who are all those people sat with Paul Grogan. 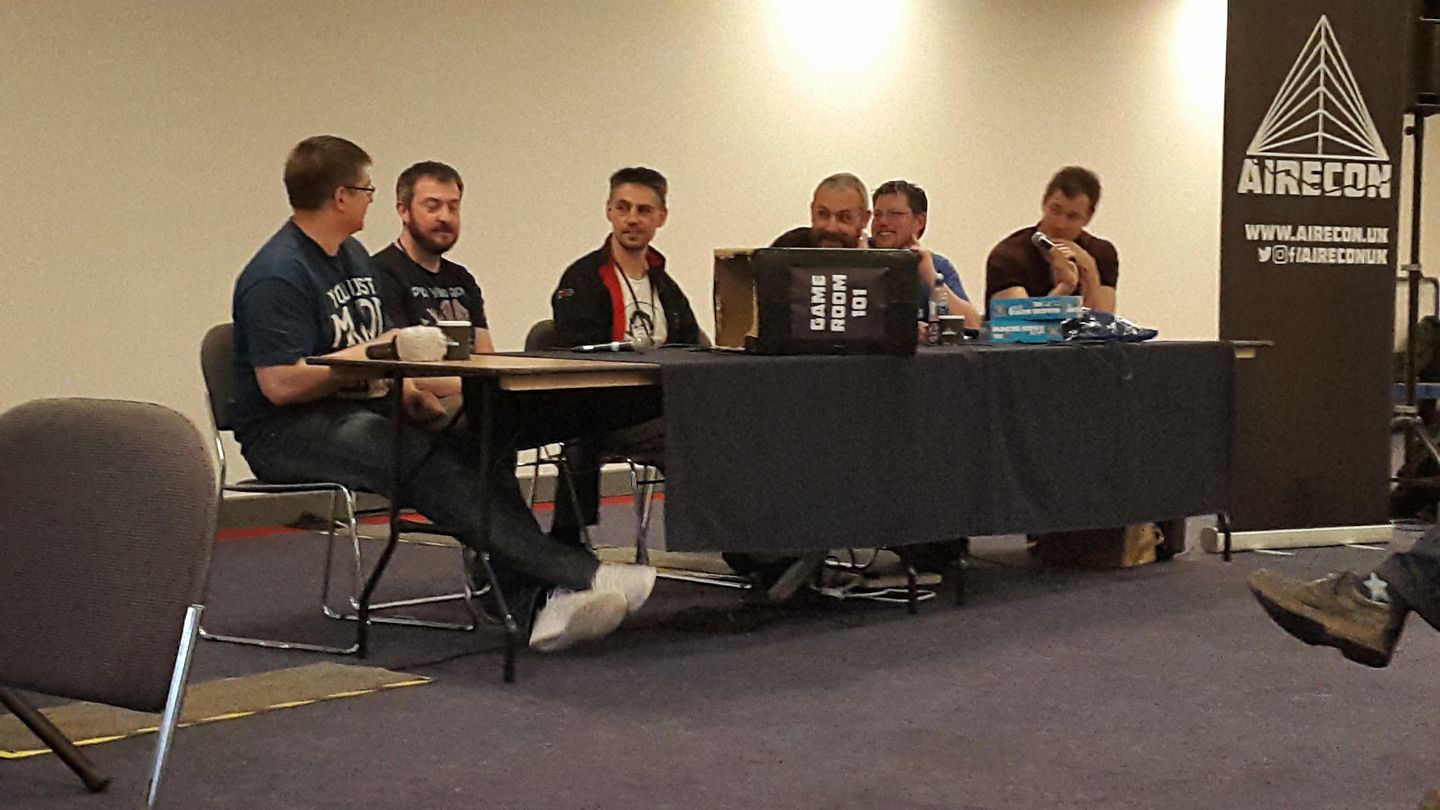 We drowned our sorrows with some more great games!
and Fuji Flush which despite my best efforts wouldn’t flush and two of the cards were still circling the u-bend two days later.

Was a time for quiet reflection after the words of encouragement from last nights panels across social media by our fanbase, and the subsequent spate of suicide attempts by the UK’s best and brightest content creators it was time to put a brave face on things and have a mooch about. 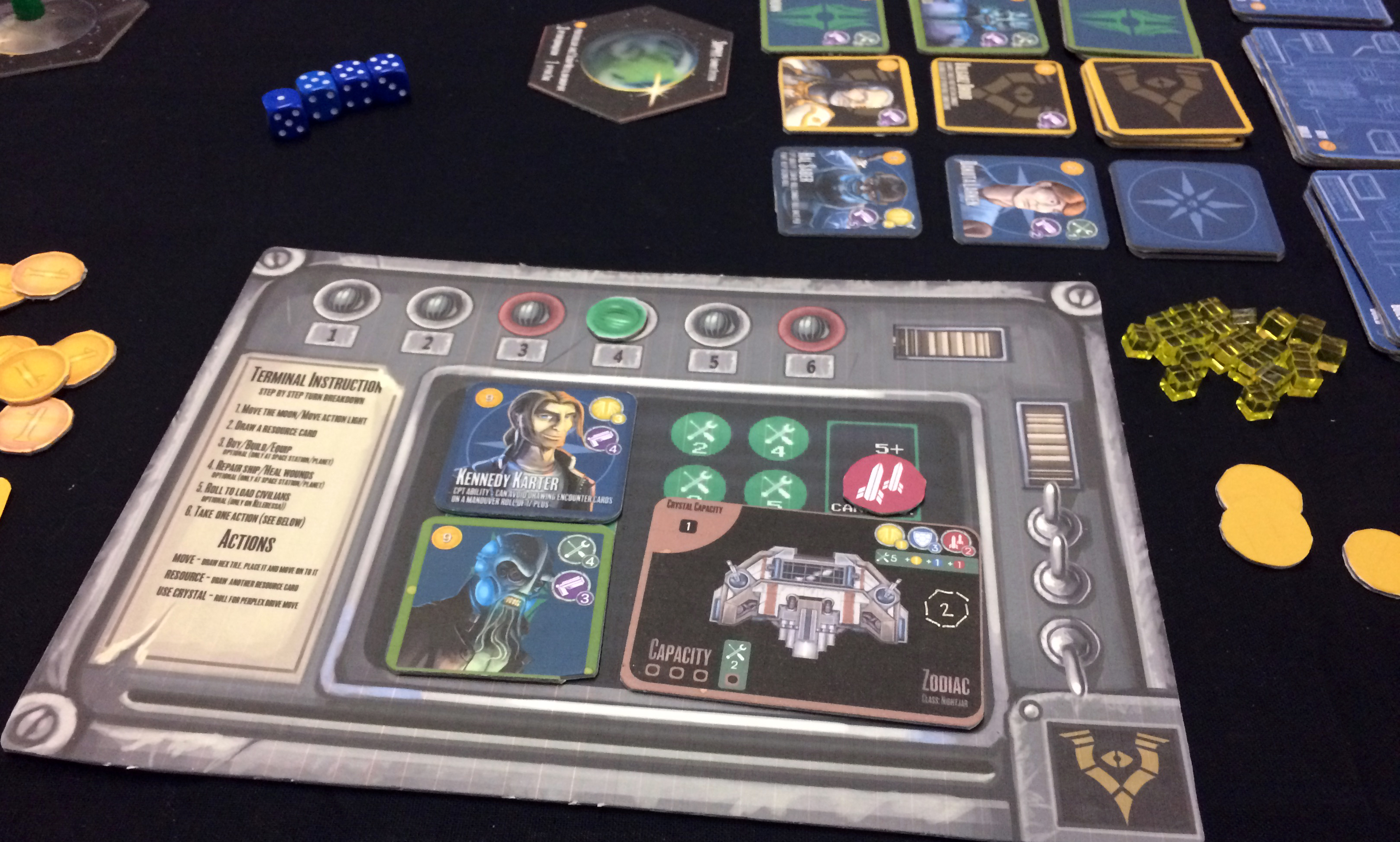 First up was Defection from Thundervaults and James Tomblin. It’s a space-based pickup and deliver game with more than a passing resemblance to the beloved Elite BBC Micro game with a dash of Firefly. Still, in its early stages of design, I can’t fault James for his enthusiasm and he even managed a brave smile and was unflustered after I broke his masterpiece on the first turn. What I saw was fun offering a heap of dice chucking and the skeleton for delivering a rollicking space adventure over an evening with your buddies. When we know more, you’ll know more. 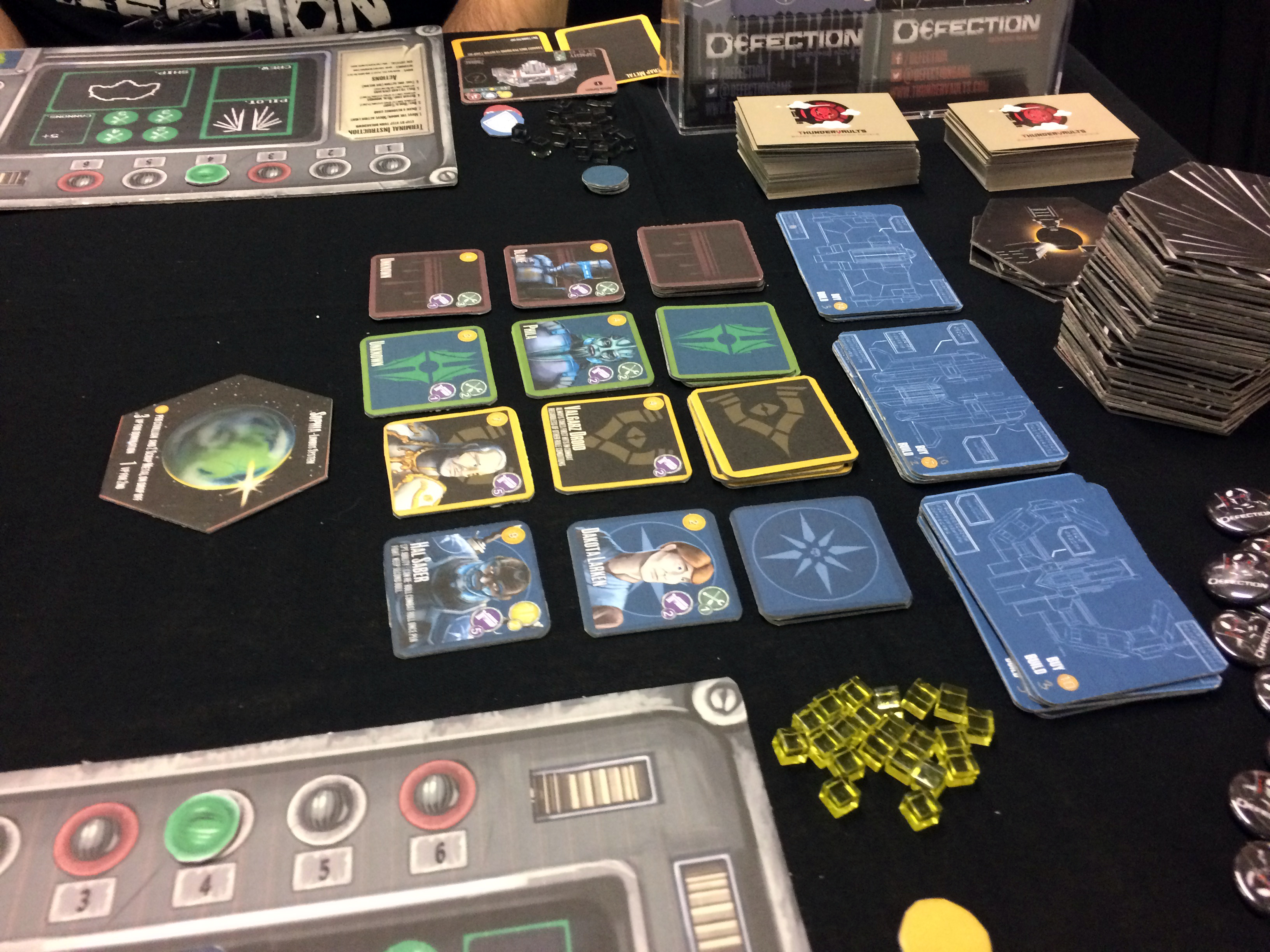 Next up was a spot of Sub Terra from ITB and the recently minted Peter Blenkum hot from it’s not insignificant Kickstarter success. It’s a really solid little tile placement game of nail-biting terror and spelunking. It’s fast and brutal and huge fun and of course, we died, not my finest hour as my Medic ran off into the cave system leaving Peter’s wounded diver to the mercy of whatever that orrible bloody thing was skittering in the dark. If you loved the movie The Descent and you missed this on KS then I very much recommend that you check this one out. 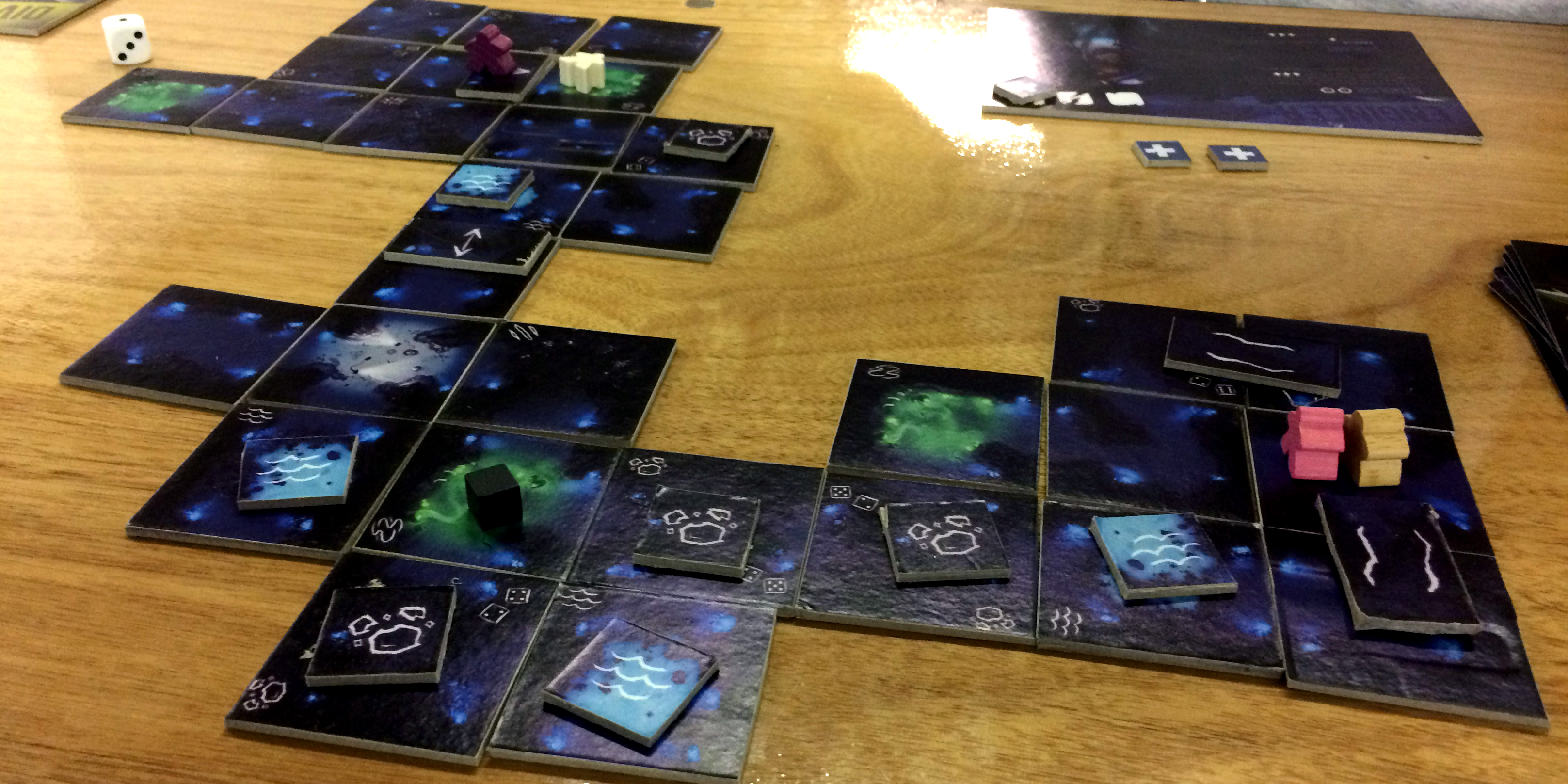 I was then fortunate enough to bump into Adam from Prepare for Boarding and occasional writer of stuff for us. We then skipped hand in hand around the demo tables and found ourselves at Gloom of Kilforth. 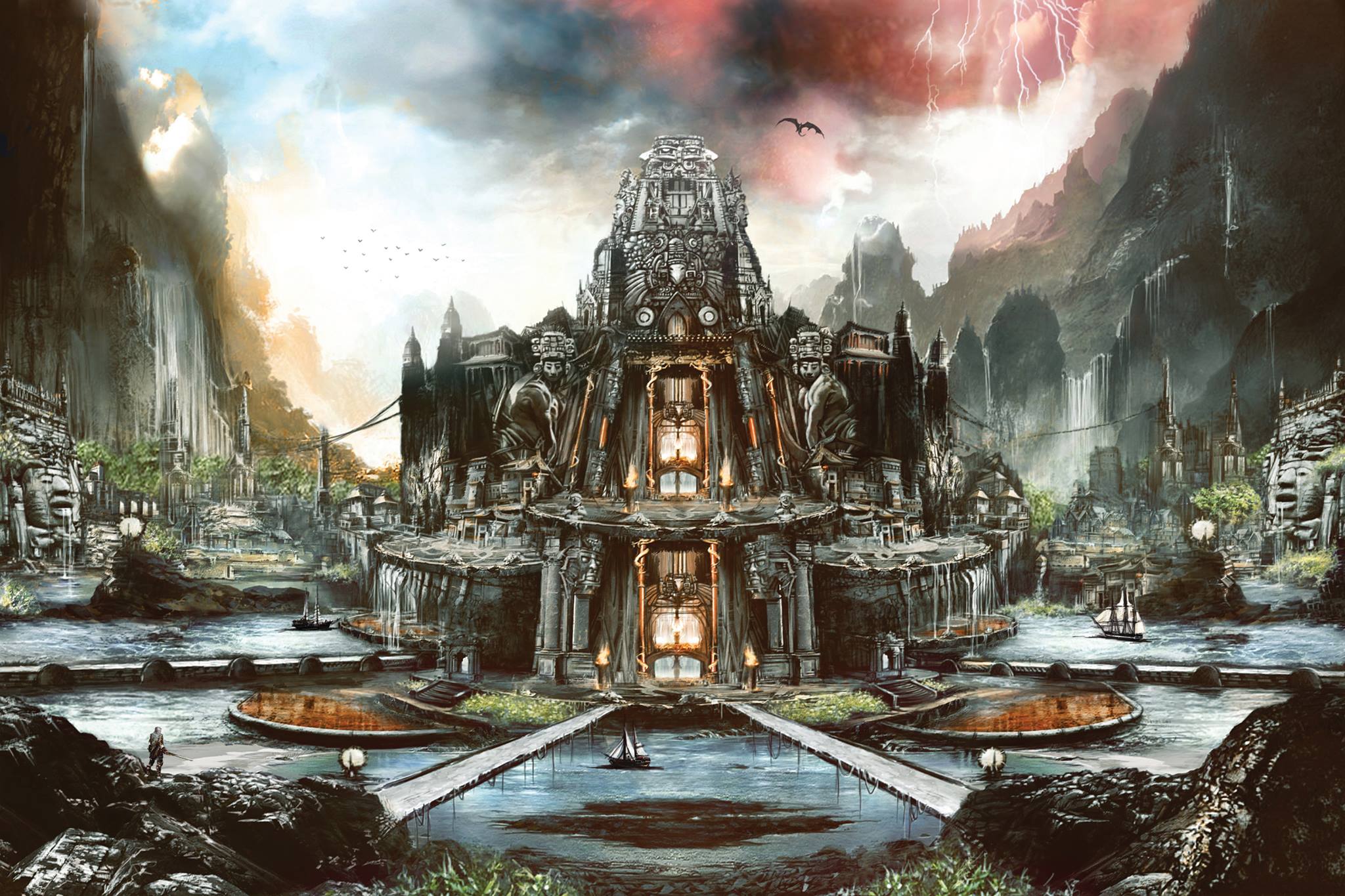 Now, this was one I was excitingly waiting to get a play of, funded last year on KS it’s a fantasy quest card game but was unfortunately buried by the noise from that other big adventure game with Gloom in its title. 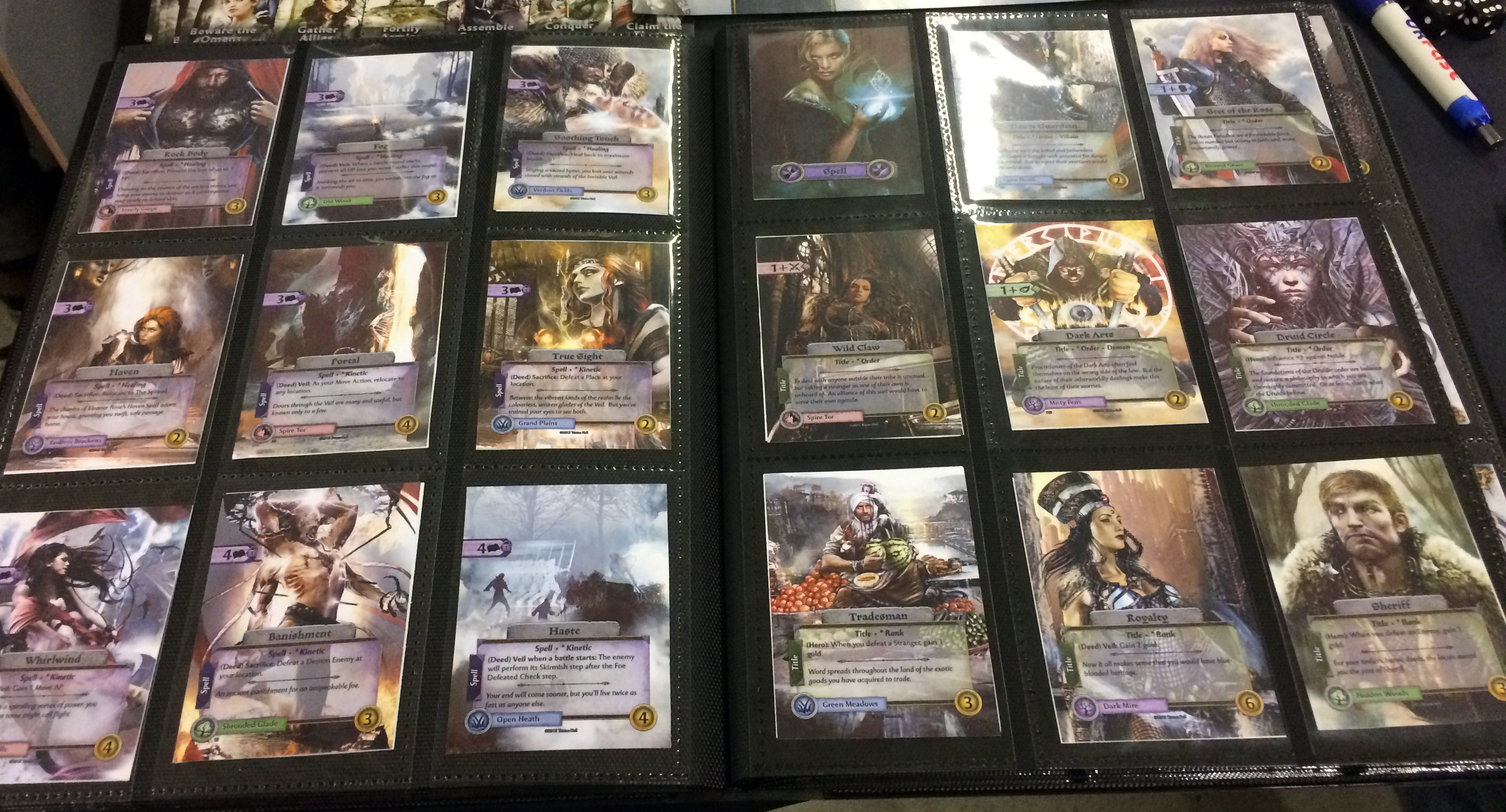 Before I say anything else, the art for this game is absolutely fucking phenomenal I spent quite some time just gazing at the stunning portfolio of cards and twice was escorted back from the toilets with it by a concerned passer-by. 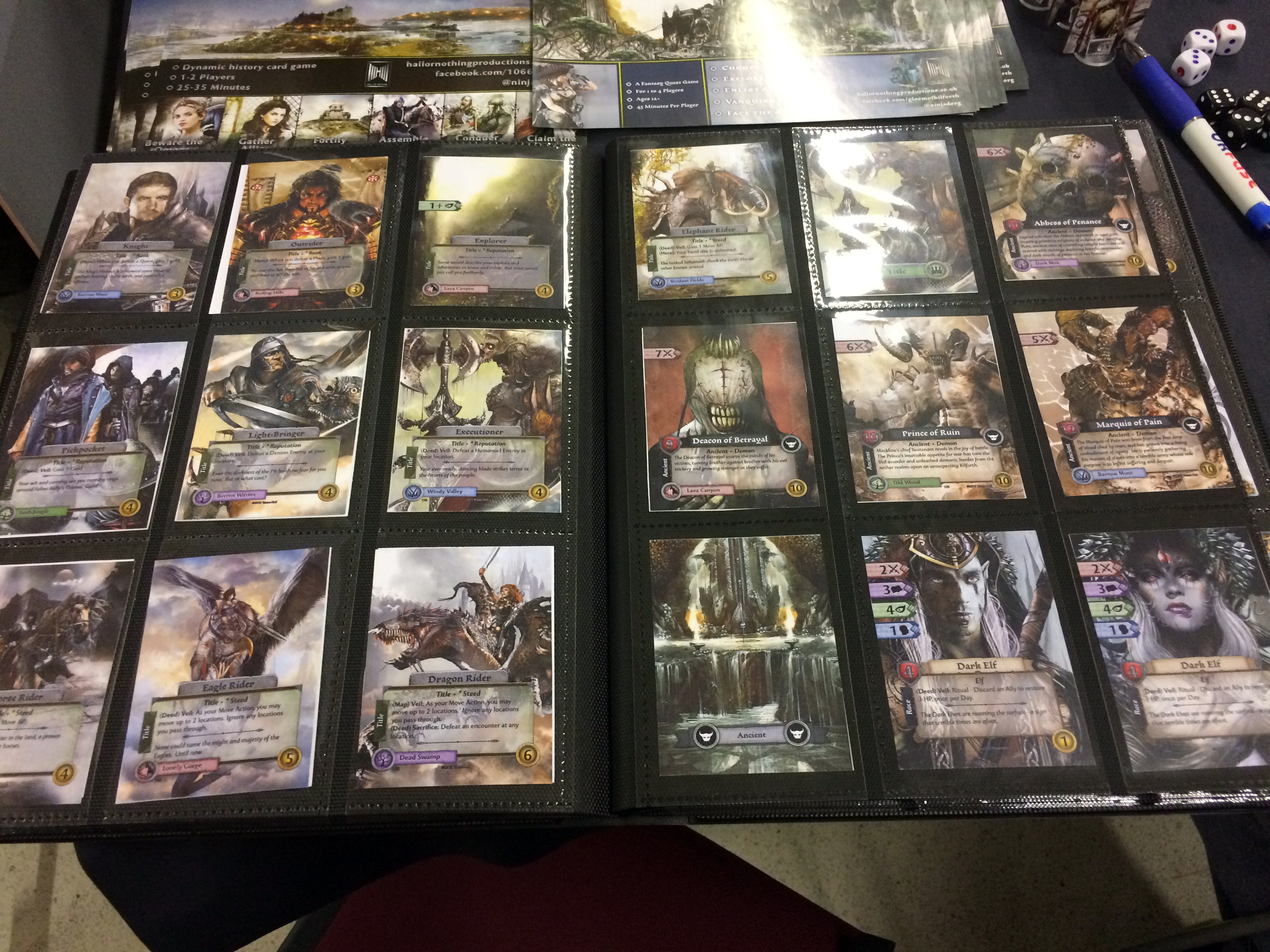 We only played a quick demo whereupon I instantly went against Tristan the designer’s advice of playing it safe and taking it slowly and marched off into the unknown and somehow against the odds met a terrible friendly Goblin (George) who directed me to my quest a hidden bridge (I was standing on it) and I romped home to victory. Adam managed to get married to some passing bar wench and I presume is still somewhere out in a mystic grove being henpecked. 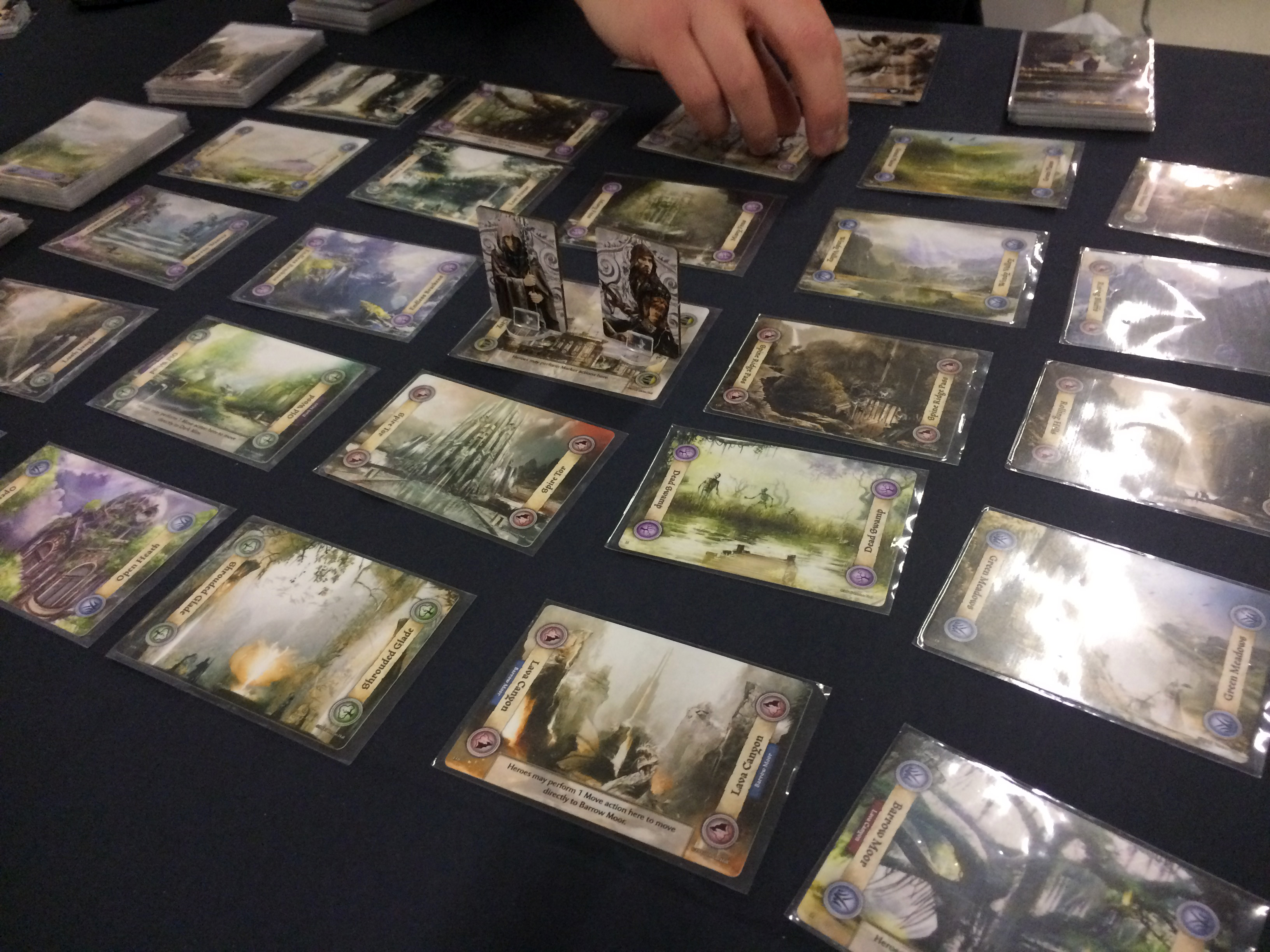 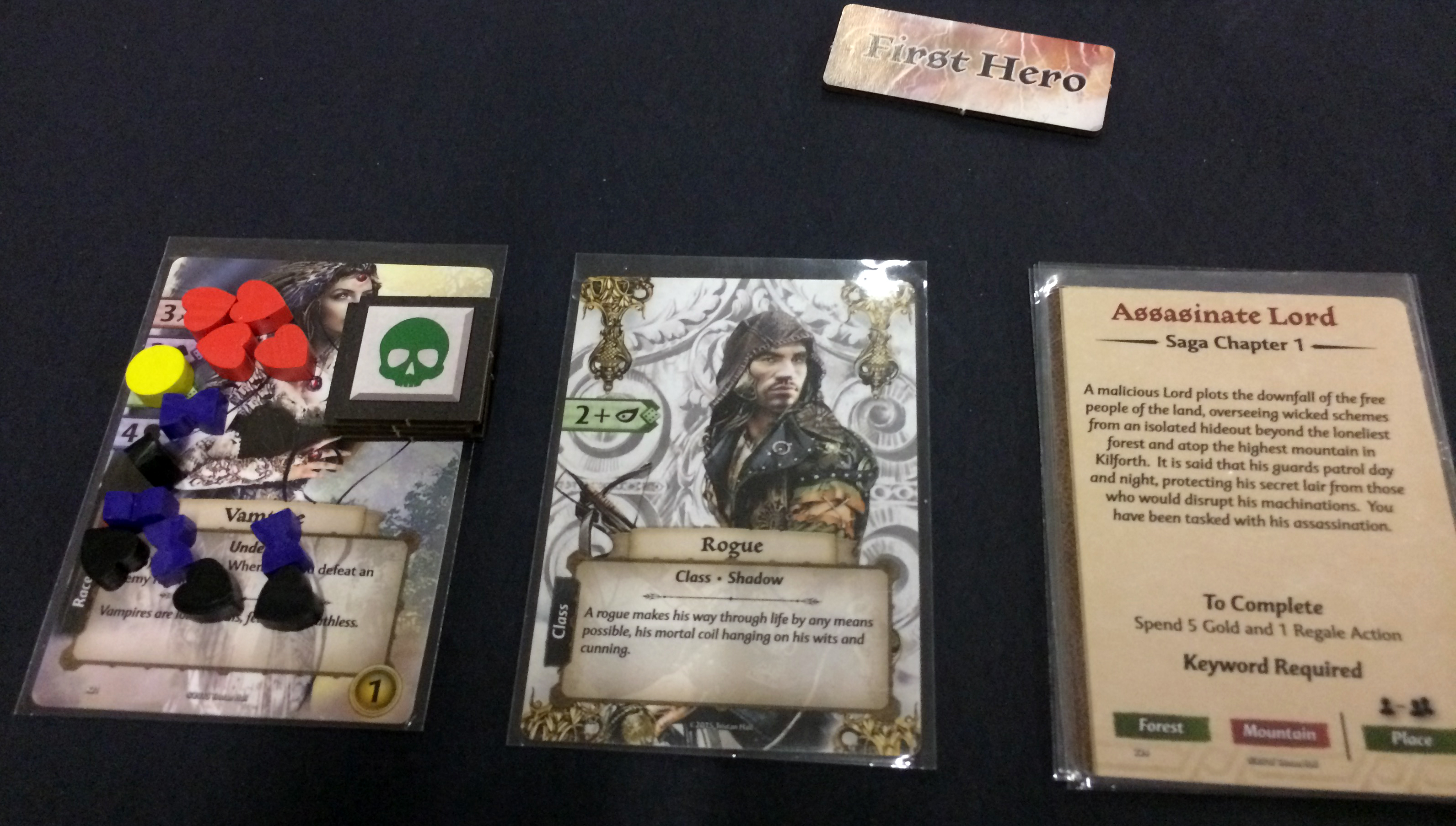 From the peek we had into the world it’s a really satisfying questing adventure card game think Skyrim and easily gives similar more lauded projects a run for their money and it’s now firmly on my radar and I strongly suggest that you would be wise to give this one a serious ponder. Pre-orders are still up for the initial printing but they are in short supply, and I fully expect this to be one of those hard to find titles once the buzz properly hits. Just saying. 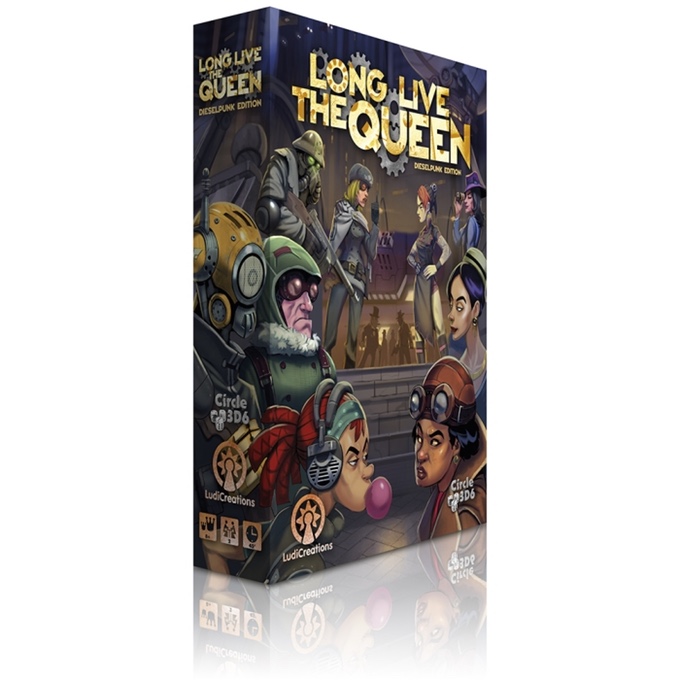 We spent some time in the company of the esteemed Mr Paul Grogan (Gaming Rules!) who ran me through a very quick overview of the Adrenaline expansion that offers up a team deathmatch variant (very cool) and he had a copy of Ludicreations Long Live The Queen a rather neat little tile placement two players tactical game that I was really surprised by. It’s on Kickstarter Now and if you’re in the market for what it offers with its tactical gameplay and love letter-ish feel to the characters and how they interact, I’d say pick up a copy it’s a steal at $19. 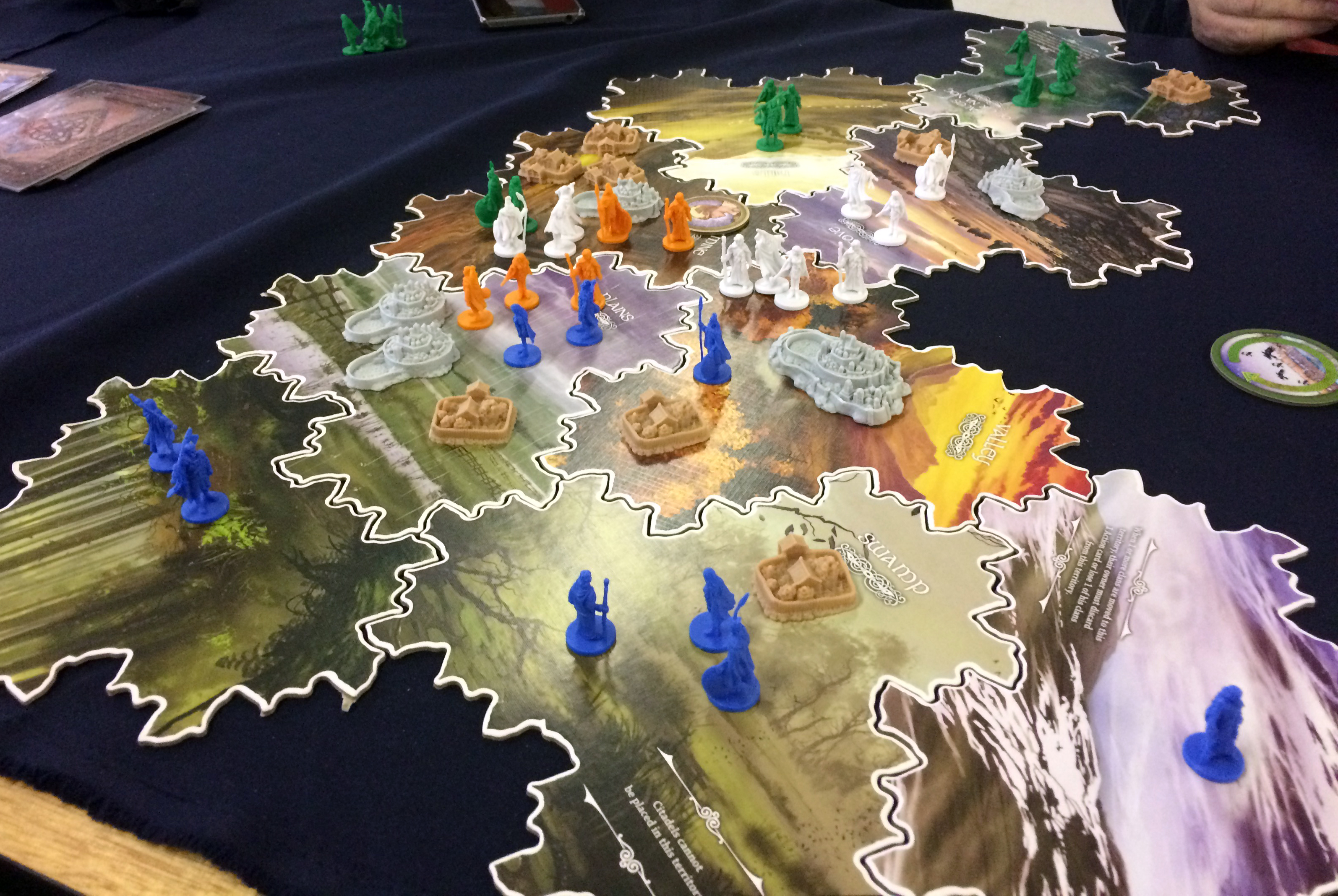 We then settled ourselves for some evening gaming and had a crack at Innis and its 1970’s psychedelic rock art styling’s which was fun if nothing else for my haphazard tactics that nearly caused Luke to have a stroke. I enjoyed it but my heart still belongs to Kemet. 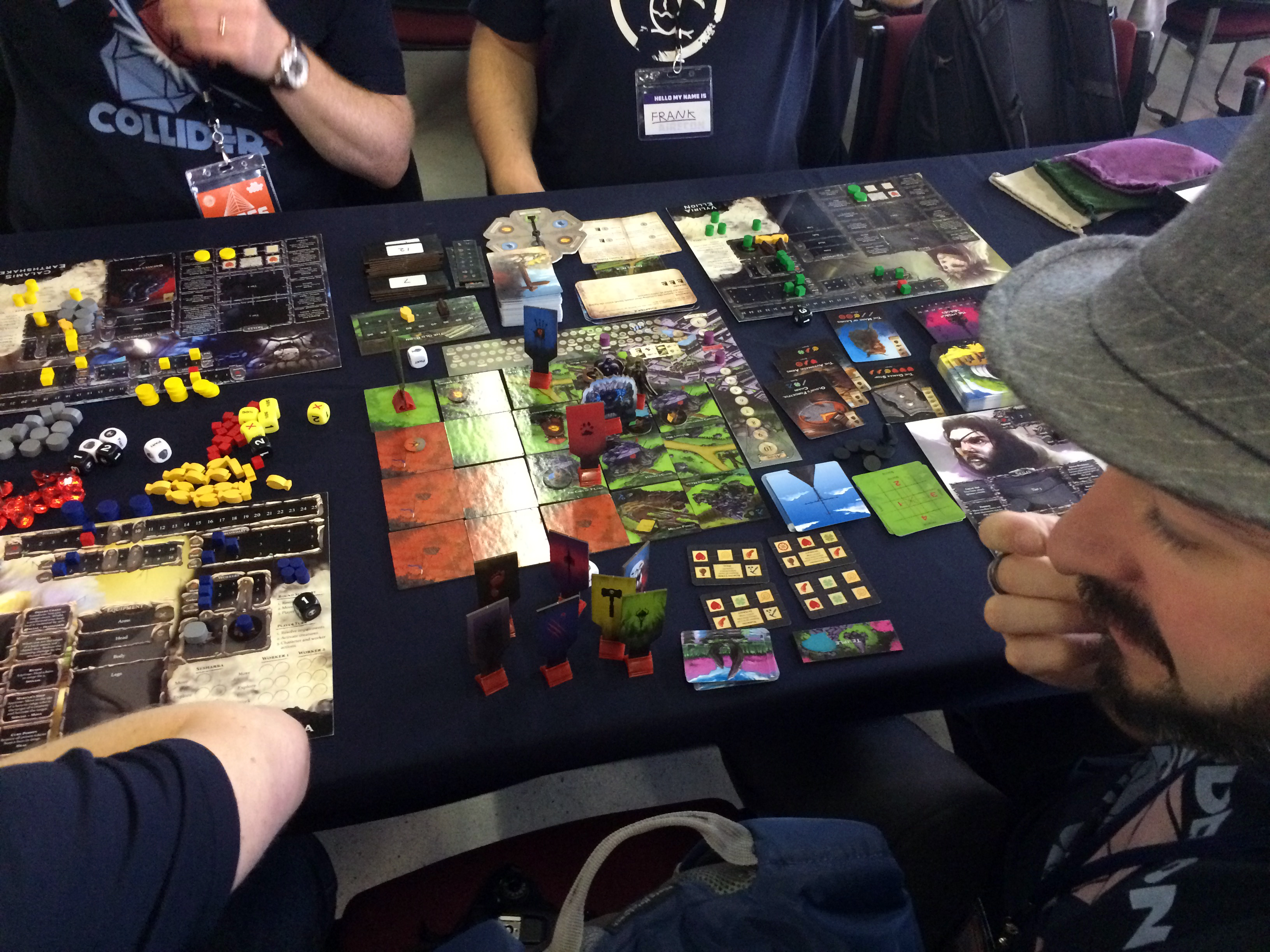 The city of Kings. Sadly never got to play this, but looks lovely.

Then things got all mathy with Ponzi Scheme that was a surprisingly good bit of fun of fraudulent investments and pushing your luck and wallet and hoping everyone else goes bust before you. It’s a shame it’s not more wildly available if you could grab a copy for £25 and not the £50/£60 asking price I’d snap it up now.
Then we did a Feld with Trajan and after an hour or so’s play had to admit defeat after we completely got the rules wrong huzzah!
With time ticking on we blustered through most of a game of Founding Fathers as we attempted to knock up a quick constitution before we were kicked out. And I have to say this one left me resoundingly underwhelmed, which is a shame as it has a bunch of card play with multiple uses and some brutal take that, that I love. Swingy cards with some crazy powerful abilities and lots of paths to victory should have been my thing, but I really struggled to connect with this. And then it was time for bed. This would be a shorter affair as I really needed to hit the road before 12 to be back home before Christmas. After topping up on coffee thank you Airecup you little porcelain diamond we dived into a demo for War of the 9 Realms from those lovely chaps at Wotan Games. The ever enthusiastic Laurence proffered a cut down 2 player skirmish version of the full game and both myself and Adam clashed in a mighty Viking bloodbath of violence and song. And he kicked my arse but as ever I was incredibly gracious in defeat. 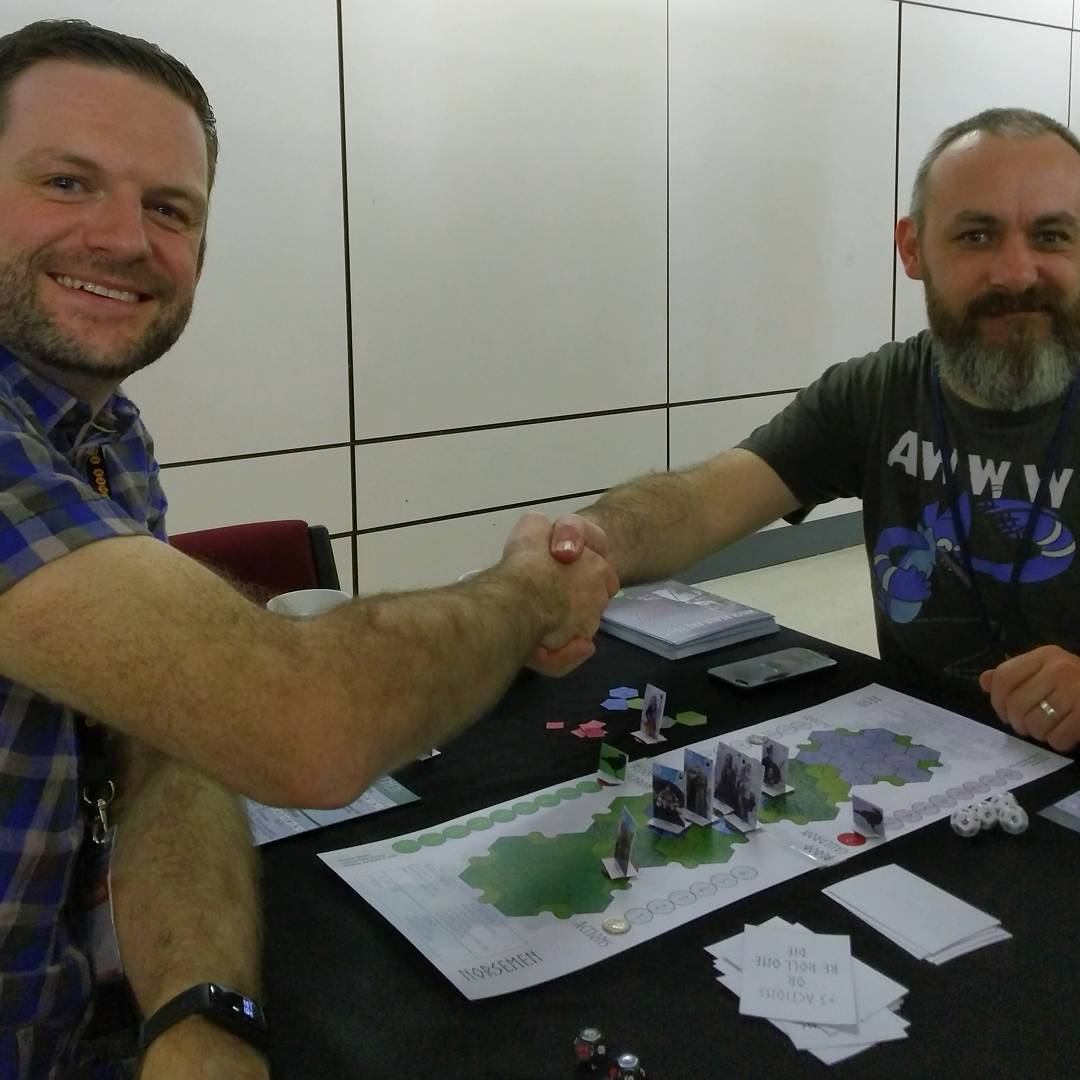 This was my first chance to actually play the game since it first appeared at last year’s EXPO and consider me a huge fan. Coming off as a solid mashup of tabletop wargame and skirmish game this really took me by surprise. While we only played the condensed version it was a brutal and fast paced affair with dice combat and card mitigation and we both really got into it. it was really rather good and the prospect of a four player free for all complete with ranged weapons and other sharp and pointy things had me salivating to give it a blast. War of the 9 Realms is coming to Kickstarter in May and is firming up as one I’ll be keeping a firm eye on as it really scratches my wargamer itch without bogging itself down with tables and other nonsense.

And so as the clock had struck the lunch time witching hour I had time for a brief goodbye and had to hit the road. 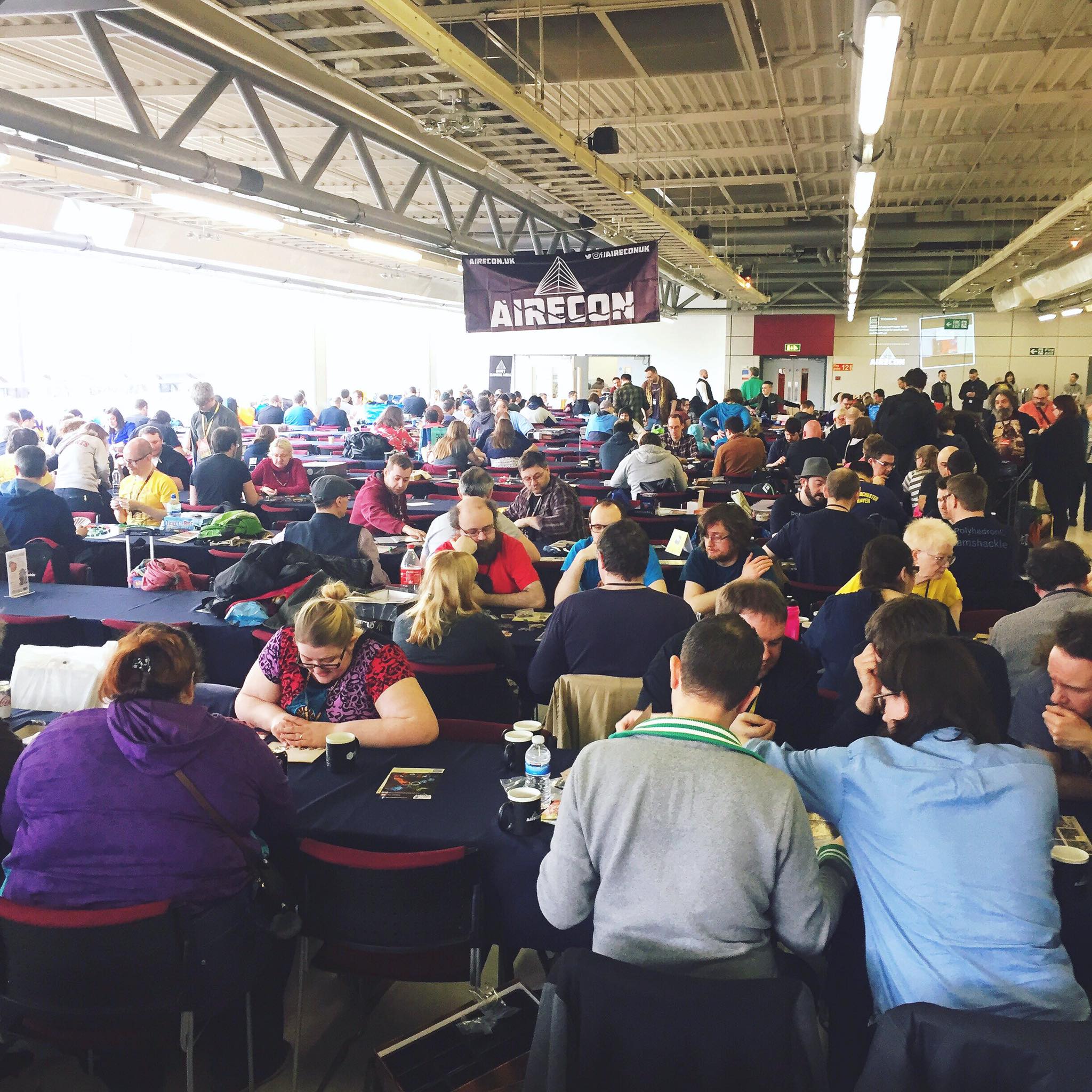 Airecon was a storming success, it offered heaps of gaming room for players and just the right amount of stalls and demo’s to be a satisfying distraction when you wanted a wander. How it grows in the coming years will be interesting as its certainly given itself a firm grounding and I look for forward to visiting again next year.

Now you must excuse me as me and Airecup need some alone time.