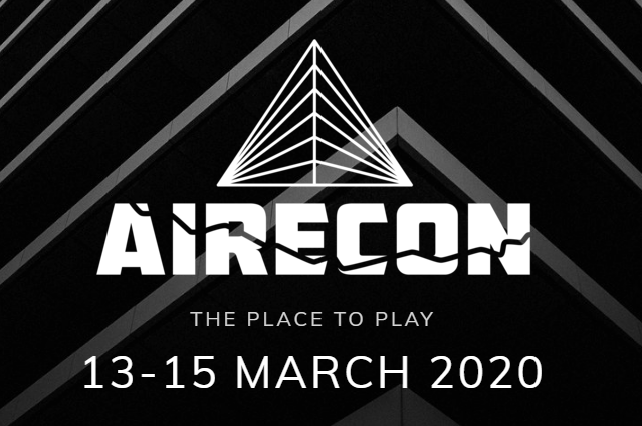 The world’s a very different place from when I attended AireCon a scant few weeks ago and even then it was all starting to go a bit weird. Boris was talking about herd immunity and Trump was declaring everything fake with each passing day he resembles the Shark denying mayor of Amity more and more.

Hopefully, this not being the last UK games convention I attend for the year, I present to you my experience of attending AireCon 2020.

I’d been asked by my old GM, Graham, about whether I would be attending AireCon. I’d heard nothing but praise about the place and one of his players, Split, would be GMing his first convention games. I figured I’d go along, stay at Graham’s, play some games and take in the sights from a newbie’s perspective. I even got organised enough to sort out transport ahead of time and then everything happened. Then it escalated. Covid-19 was in its early days as far as news about it, but even so, my day job was beginning to prepare contingency plans in case everyone needed to work from home (I know, shockingly Who Dares Rolls and it’s wonderful handful of Patrons do not prop up my lifestyle). I packed light, with changes of clothes, a couple of small games and my phone which has been on the verge of death since about December. I met up with Graham, travelled to Wakefield with him. He kindly gave me an old digital camera so I’d be able to take pictures without taxing my poor phone at the con, we played some Red 7, some Tiny Epic Galaxies and then called it a night before getting up early to pick Split up and head to the convention. 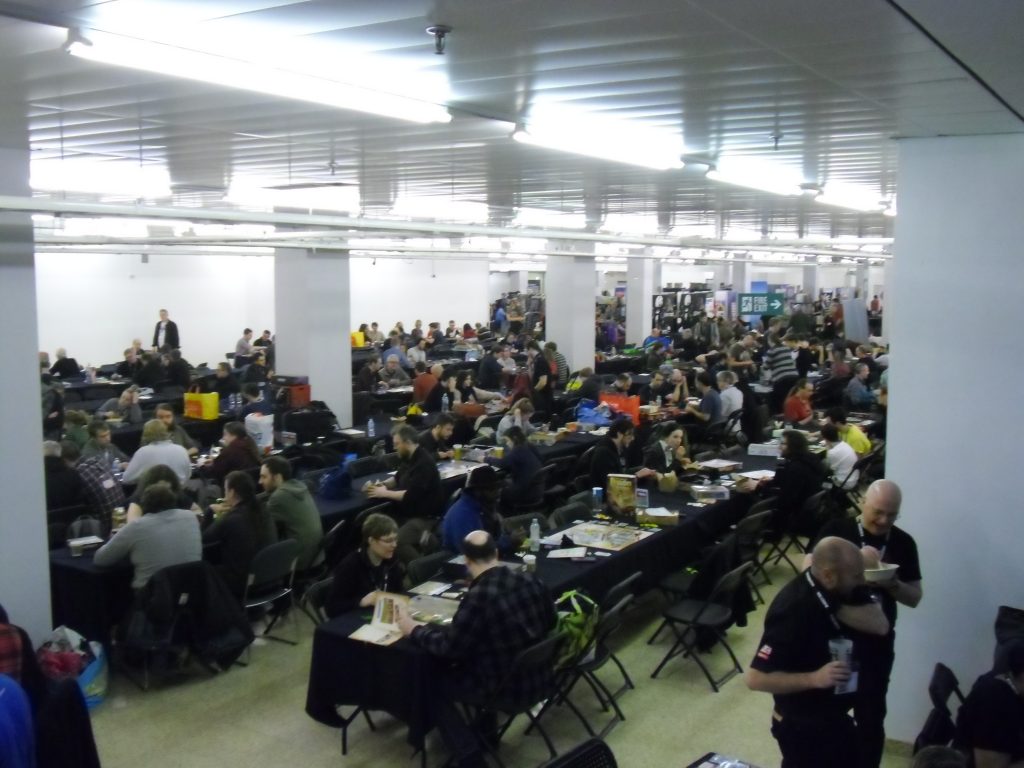 On Saturday, I wondered what the convention hall would be like; we were already being told to carry hand sanitiser, which as press for a tabletop gaming site, I already did. The elbow-based alternatives to handshakes were already being shared online and other conventions were dropping like flies. I kept checking the AireCon Twitter and Facebook groups to make sure people were going to the con. 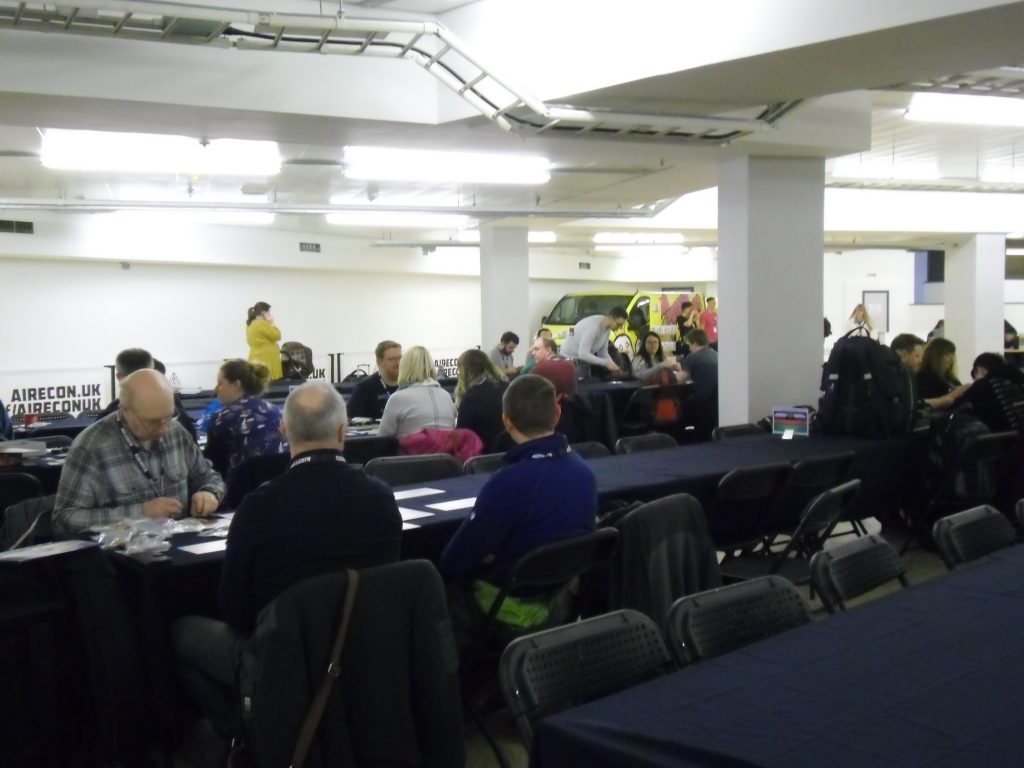 The security guards were thorough in checking bags and making sure that folks were being well-behaved as far as to contact or anything like that. The entrance I went through had steps up to the Bring & Buy and RPG area, both of which were my first ports of call, then a walk past several gaming tables would take me to the hall. There was a giant Tsuro set which looked cool, although I decided against being that close to a lot of other people. 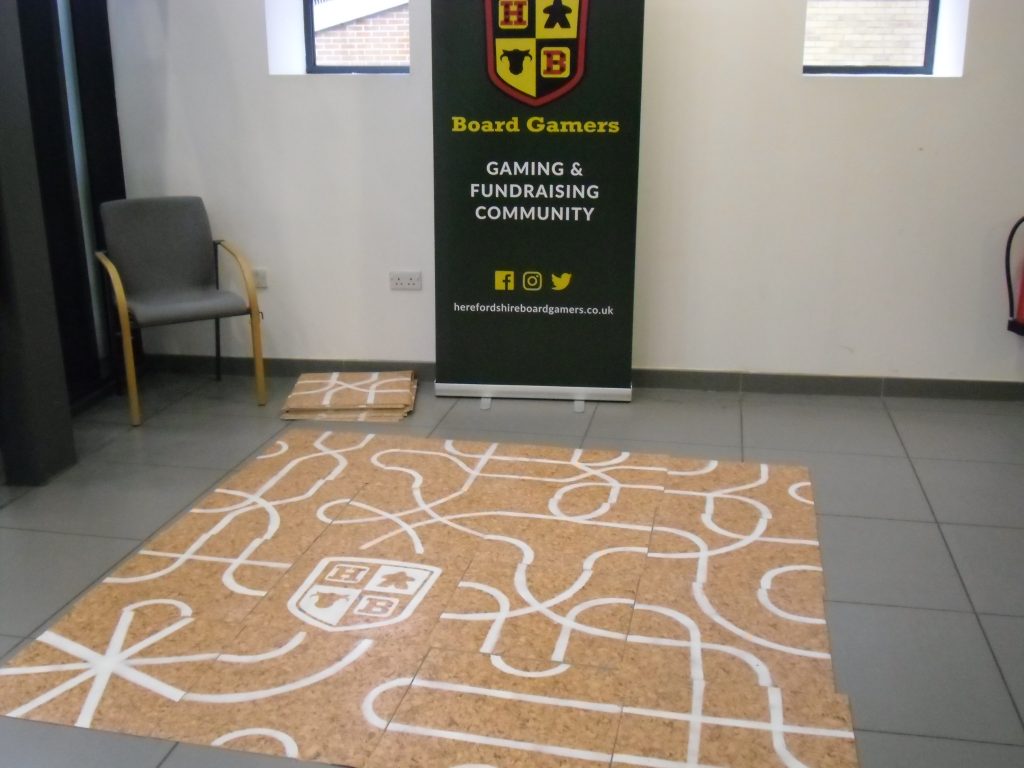 The Bring & Buy was well organised and not as mad as the UK Games Expo one. I was disappointed there weren’t many RPGs, but I’m used to Dragonmeet which does treat roleplayers pretty well. The queuing system didn’t take too long and everyone kept a good distance from each other. The paranoid person that I am, I made sure not to fondle too many game boxes, instead finding a long-time wishlist entry of mine in Millennium Blades, grabbing an Undo game out of curiosity and then ducking out to sign Graham and me up for Conan. 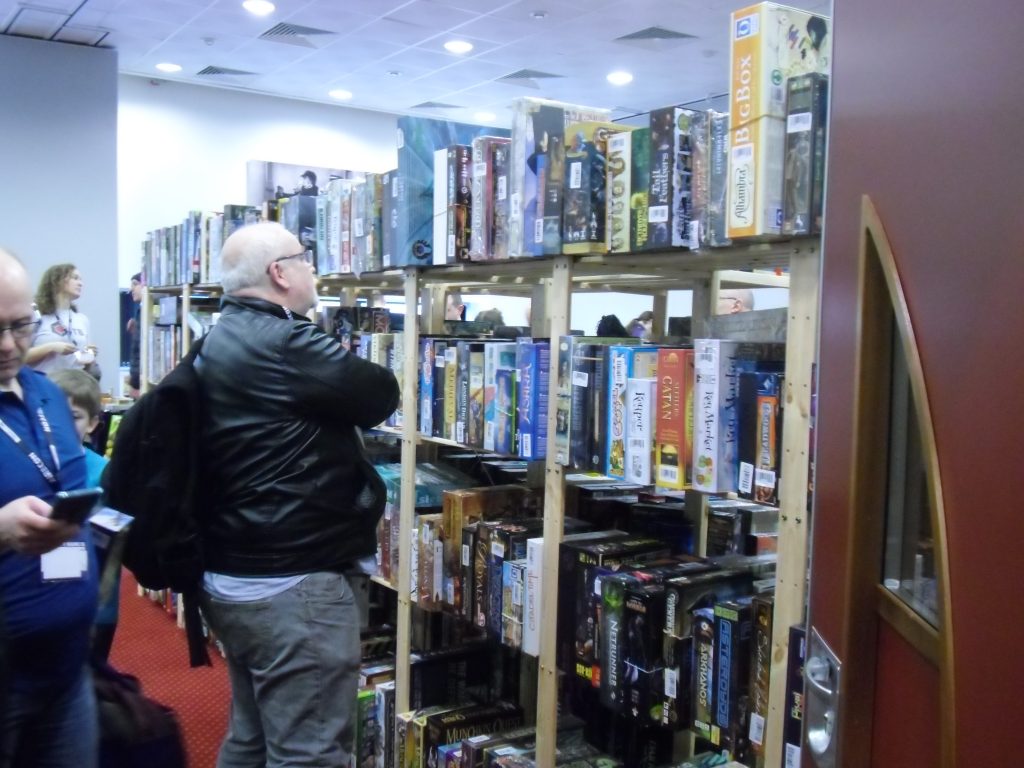 As a first-timer, I had no way of knowing whether the hall was more or less crowded than in previous years. Their Facebook site says they were up 15% on last year’s attendance with 2,268 unique attendees. The main hall had a central set of rows of retailers, flanked by sets of tables for people to sit and game. Moving through the space you could spectate for a bit or join in a game if people were in need. Introvert that I am, I stuck away from that this time. Hopefully next time I’ll go and pester more people for a game of something. There was a game of Twilight Imperium being set up, which feels very confident and/or foolhardy as a convention game. I spoke briefly with some of Bez’s volunteers and the makers of the Loke Battlemats who were all lovely then started to hunt down demos. 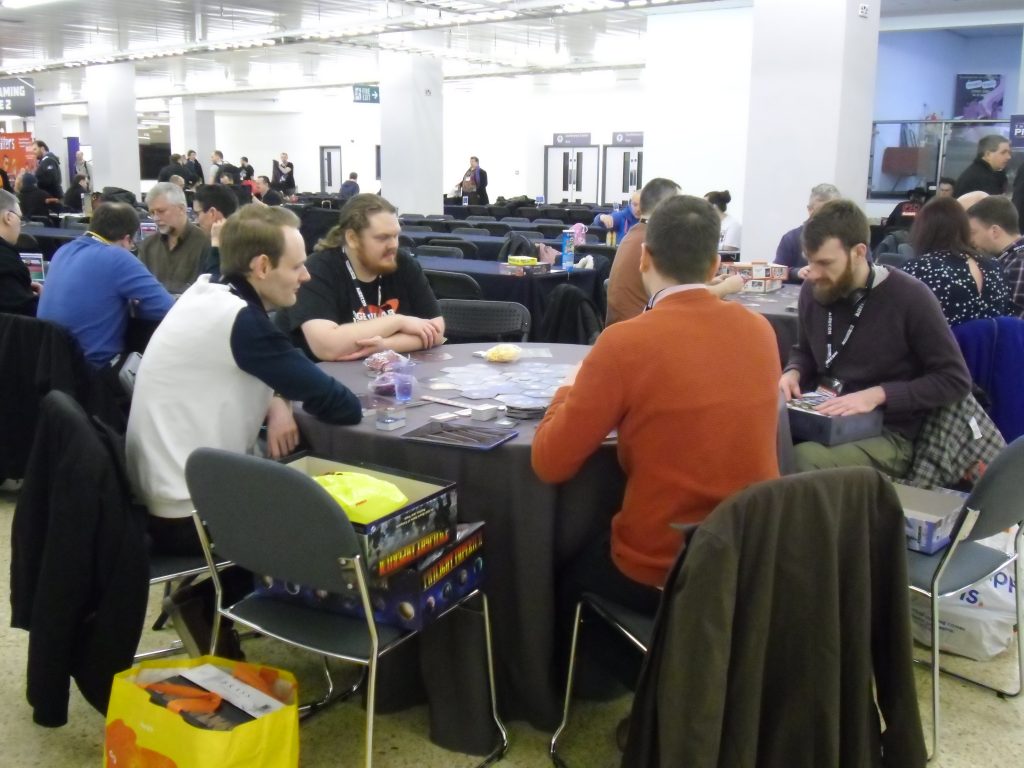 Die of the Dead by Radical

This table was packed, so I never got to play it myself, however, I did get a nice overview of it. Die of the Dead has little cardboard coffins and a great Day of the Dead aesthetic, all made by a Mexican artist. All of this sounded like it would be perfect for my partner until I realised it was a dice-chucker. The thing is, this game might still work. 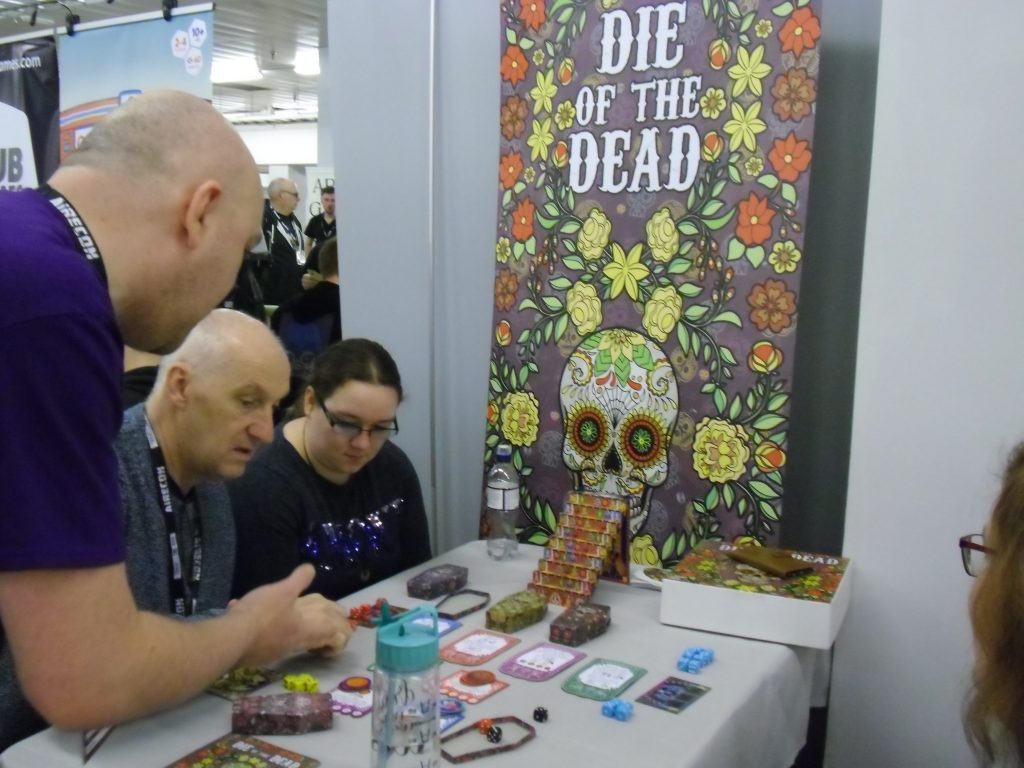 Die of the Dead gives each player dice to roll and actions to decide on, which are underneath each coffin. The thing is, the coffins move like they’re on a conveyor belt which cycles back around eventually. Early in the track, you have actions which help load souls into the coffin, but later on, you can try to exile other people’s or ascend your own. It’s all about trying to modify what’s in there and keep track of what’s in the coffin. You shake the coffins and use the results to do things like taking out some of the dice, or ascend the highest dice (great if you’ve highly loaded the coffin). It looks gorgeous, took the time to make sure that it wasn’t being problematic with the theme or the art, and sounds like it’ll be relatively cheap when it arrives on Kickstarter shortly. Keep an eye out for them here. 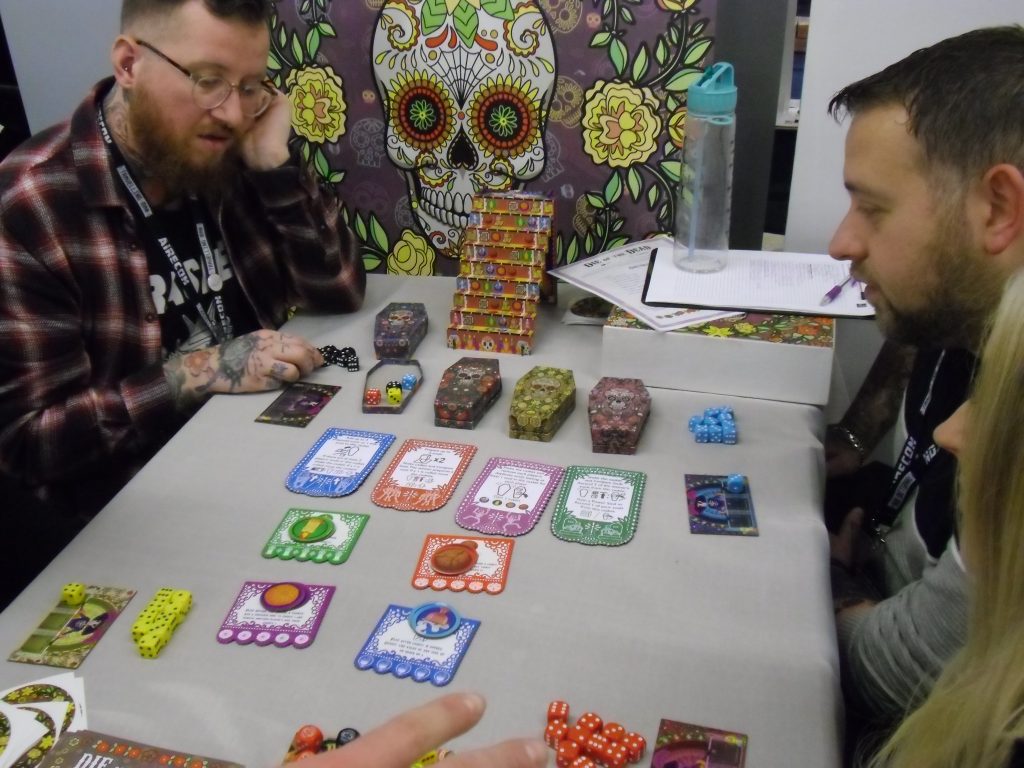 This was the first game I got to demo, with Thibaut Devigne and another game designer who showed me a quick look at a really interesting prototype for a board game about numbers stations. 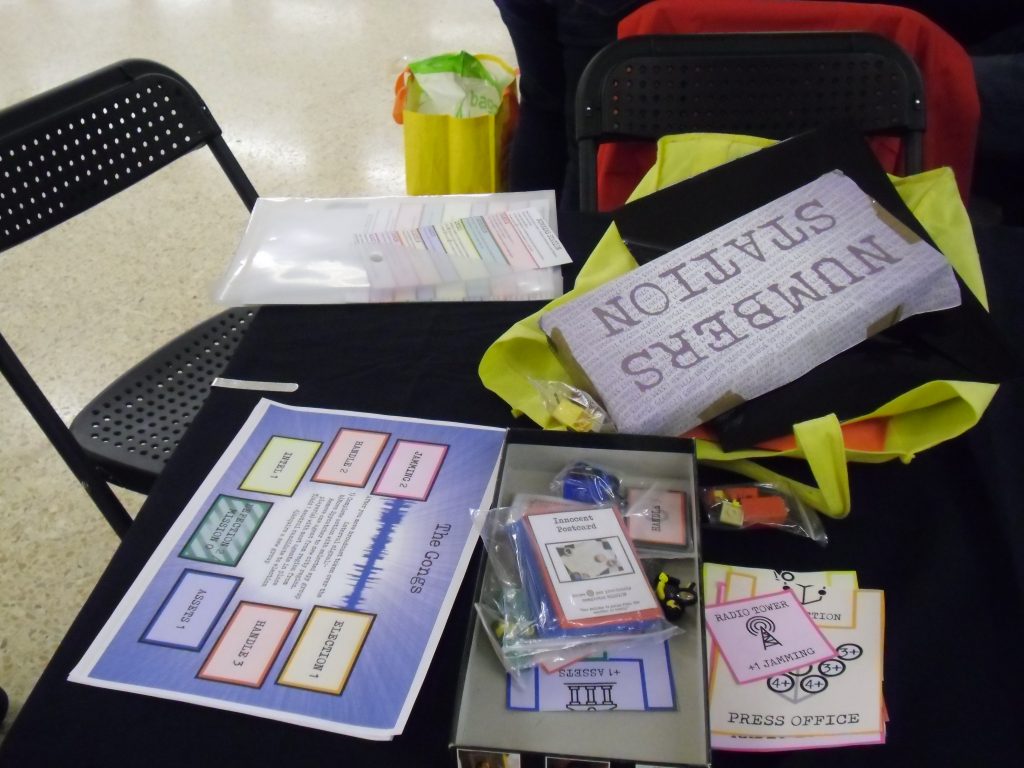 Houses of Knowledge is gorgeous, for starters. The cards have a clean, crisp design and artwork by Zoromeya which grabbed my attention. 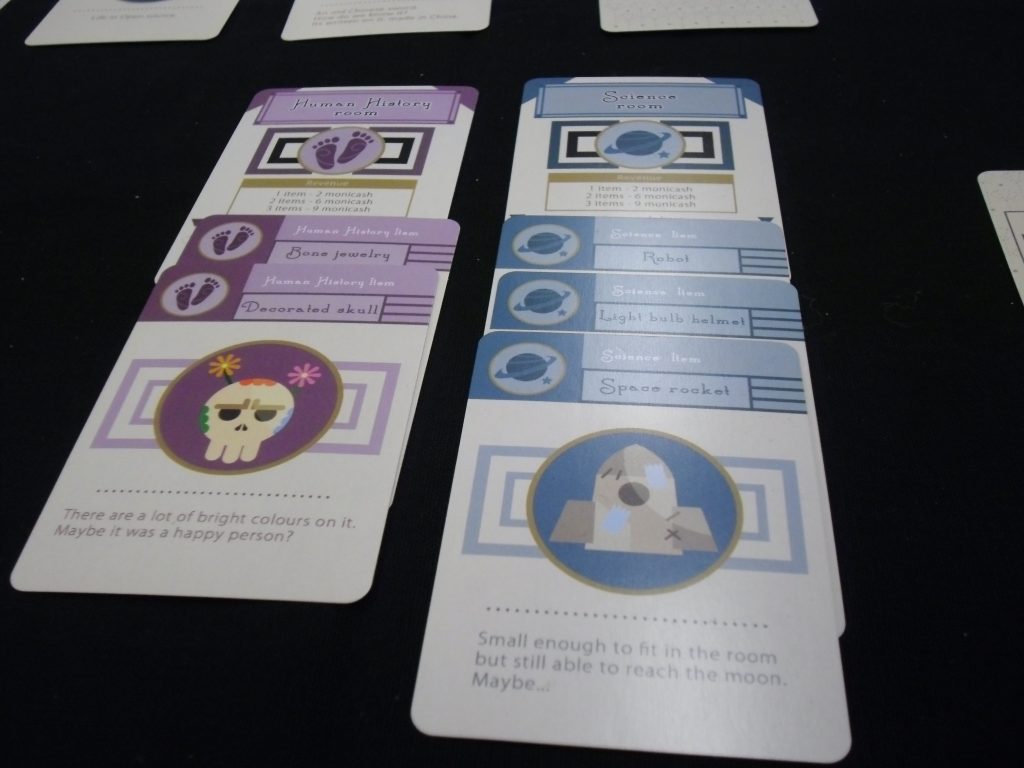 The game is about rival museum owners who are trying to build different specialised rooms and collect different items to put inside. Each room is an engine which will generate income during the game, but you need a wide array of items to get points at the end of the game. There are several people who you can use to help steal items from each other and guards who prevent that but cost you money each turn. It was a neat little game which was gorgeously designed. The Kickstarter is currently up here. To be honest, it’s a fun game, but quite pricy for what you get both from the components and the gaming experience. I hope it gets funded, but it feels like something I’d wait to pick up cheap.

Unlike the last two, this was a game which had already been through Kickstarter. They were selling their last KS copies at the show and hoping to get a reprint out soon. 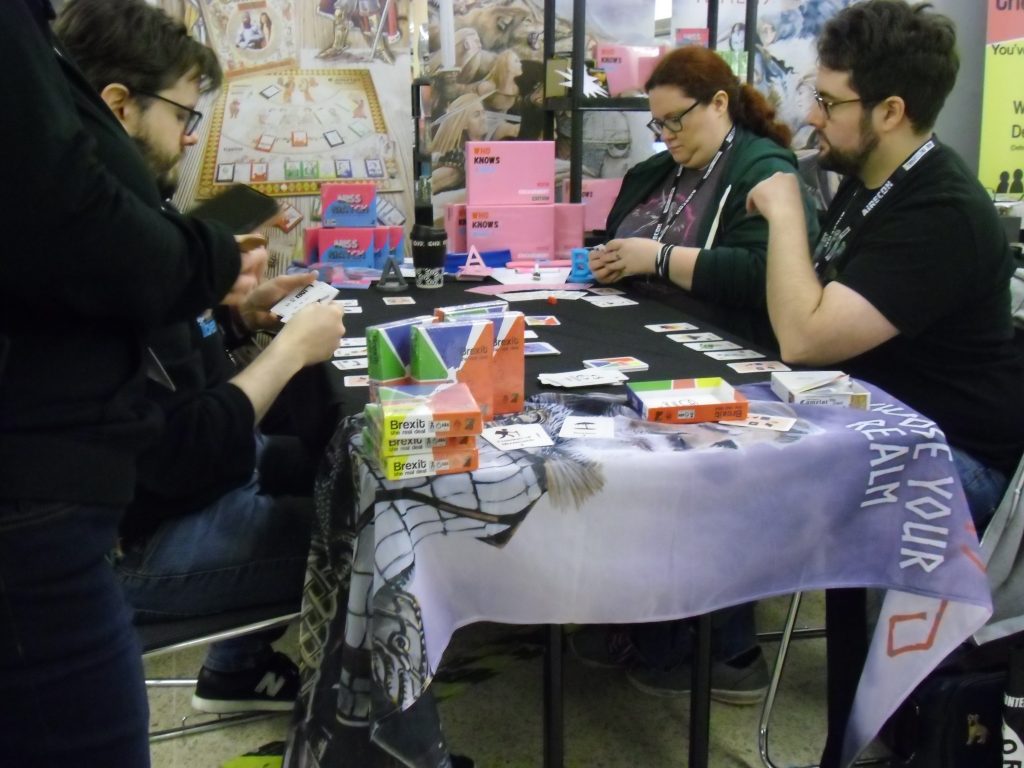 Brexit is a touchy subject, to say the least, and I’ve seen some awful Kickstarter projects trying to capitalise on it. This is a game which I’m pleased to report was good fun and the theme had a lot of fun chatter about the horrors of the last four years.

You play as England, Ireland, Scotland, Wales or Cornwall (or there’s a blank nation card, so if I get this, I might add Brighton & Hove). You all want to court different nations around the world in an attempt to either claim independence, rejoin the EU, unite the Viking states and so on. 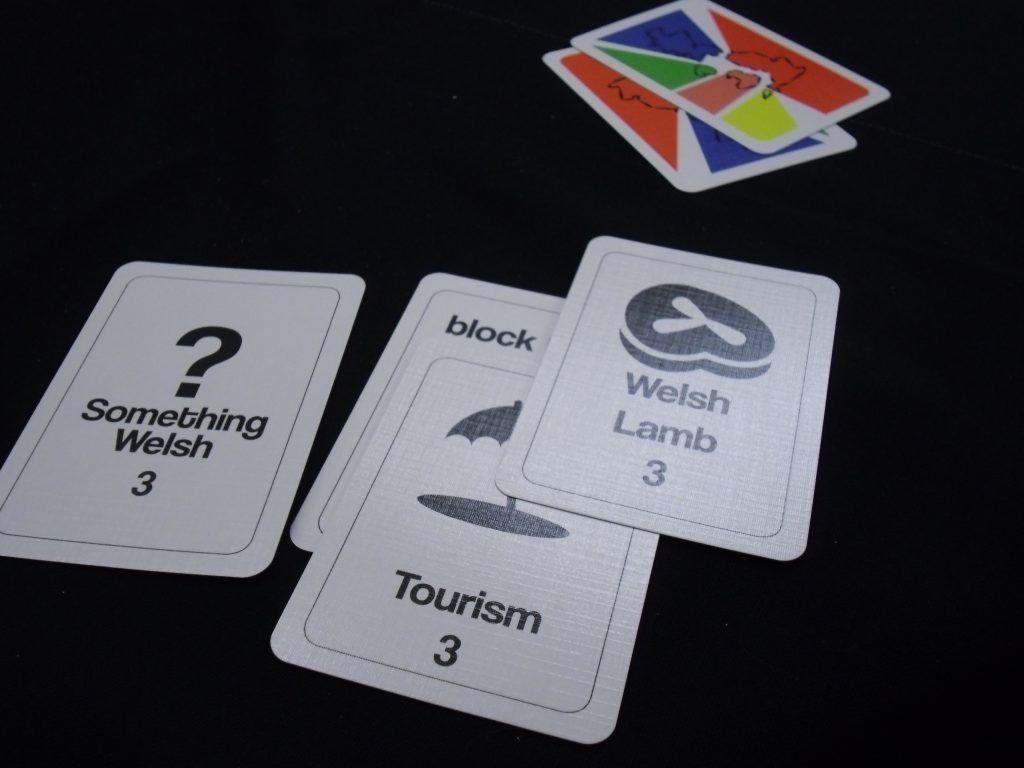 You start with a premade hand of things your nation has and a hidden goal. Everyone bids and bluffs about what they’re putting into court different nations which are laid out between players. It’s a nice, simple game which feels like something from an earlier time, without the numerous bells & whistles a lot of games need. When it’s back in print, I recommend this.

As I said earlier, I’m spoiled by Dragonmeet being quite RPG-heavy. There’s not an Indie Games on Demand area in AireCon and the list of different games felt fairly limited. Dungeons & Dragons and Pathfinder had a good showing, but the big surprise was how much of the 2d20 system there was. It’s a system I kind of forget exists sometimes, but my old GM and his friend were big fans, so I figured I’d try it out. 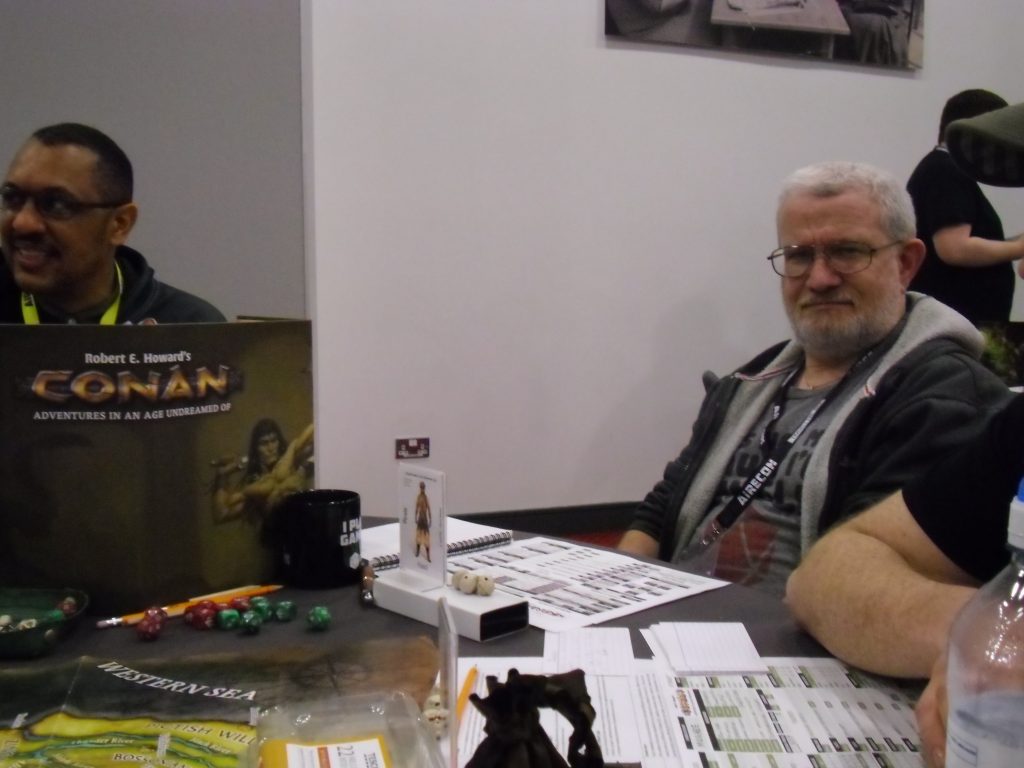 I played Conan as a petty noble and the GM kept the plot simple but sprawling as far as letting us go wide with the mission. He knew the source material and system well enough to make everything feel seamless. The system uses 2d20 rolled against a player’s skill, needing several successes to do what you want. If you go over, you get momentum which is a group pool which can be spent for more d20’s. I’ll get into more of it when I review the recently released Dishonored RPG. While the system was just fine, the players and the GM made it enjoyable. 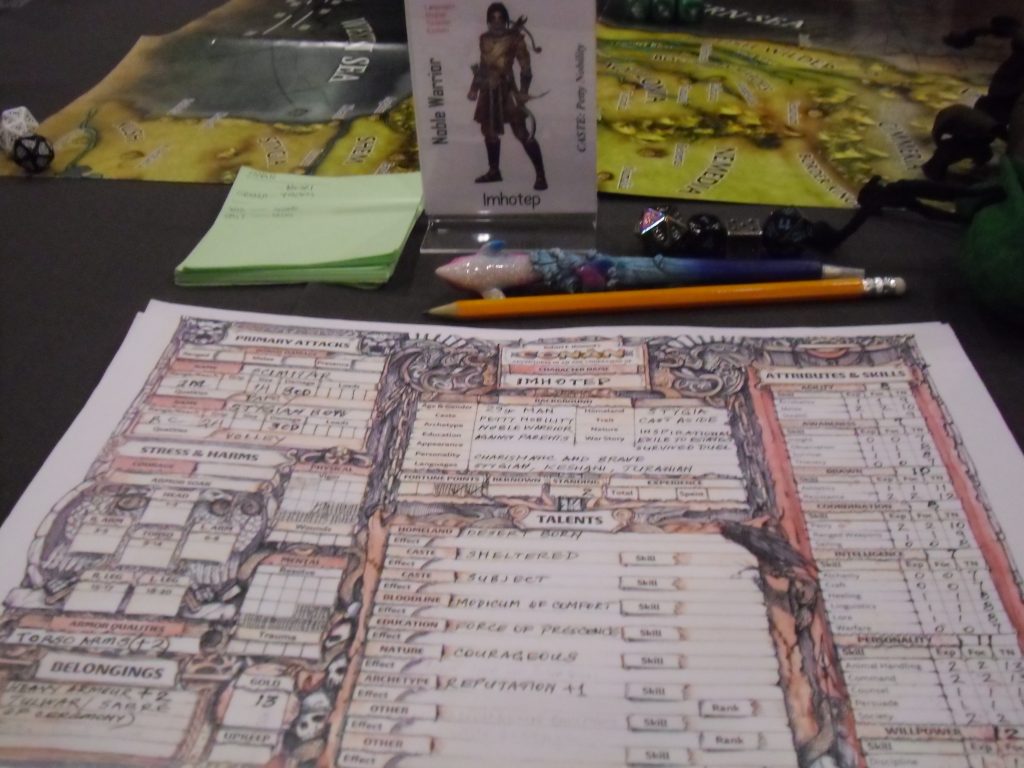 The second RPG I took part in was Night’s Black Agents, which is a kind of ‘secret agents versus Draculas’ type of game. This was Split’s third time running the scenario and second time running it at AireCon. I played Connor Joyce, who was good at hand to hand fighting and disguises. We didn’t know we were up against a Dracula until right near the end and they seemed like a kind of faded 70’s Gary Glitter style celebrity when we finally encountered him. It felt similar to Spycraft as far as planning and scouting, with each of us getting to use our specialities in interesting ways. The villain was suitably hate-worthy and when it came time to deal with him, we did so with efficiency. This was my first time playing a Gumshoe system game and I liked how it handled. Hopefully, I’ll get to run Yellow King which uses a similar system soon.

Sunday was a shorter day at the con for us, mainly because of my coach and then train back to Brighton. I got to check out the food vendors who were outside and distanced apart from each other out back from the venue, then returned to the main hall to chill with folks between games. We caught up with the GM from the Conan game, which was pretty cool and revealed that he lived near the people I’d gone to the con with, so they might be able to play together at some point.

The enormity and ludicrousness of my journey up and down only really hit as we were starting to head out. I was rationing the battery left on my phone, called my partner to see how she was doing and how the news was faring. I started to read Apocalypse World on the coach back, but couldn’t. Instead, I read Hack the Planet, an eco-cyberpunk RPG set in a quite specific apocalypse which we are admittedly also making our way towards, but it felt just escapist enough to not stress me out. I didn’t go back to the office once I returned and instead have been working from home indefinitely.

I enjoyed my time in AireCon, despite the weird aura it all had. I think given all the travel, I’d not do it again in the infancy of a pandemic. It was a nice last big, social experience to have though. I look forward to trying it again in the future when all of this is over and taking part in more games with random people compared to this quite isolated visit.