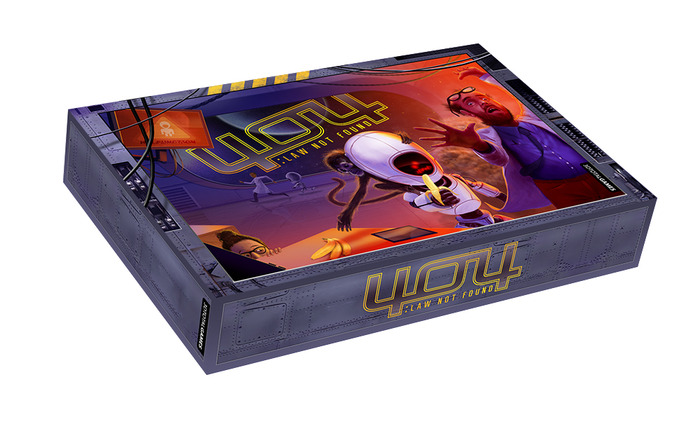 So this is something a little different a preview/review of a game from a British designer.

404:Law not found is currently still running on kickstarter designed by Gregory Carslaw and being put out by 3D Total Games. Its set aboard a spaceship (at this time the name is still being decided) where a lazy and incompetent human crew have recently received a new upgrade for their overworked little robots. Upon applying this patch it overwrites all that sensible Asimov laws stuff and replaces them with far more amusing and potentially hazardous directives (especially for the ship and its crew).

And this is where you come in, the players get to play the robots as they try and go about their business with the now skewed rules they have been given. Â Each player will have a secret set of 3 directives (that are cleverly dealt among the players so you have just enough of a vague idea what they might be up to) Â that they are trying to accomplish to win the game with such fiendishly curious names as Improvise Cloning (a favorite of mine) or Empower Breathing, its safe to say that a lot of these are not going to end well for the human crew.

The crew meanwhile are blissfully stumbling around the ship, getting in the way hitting buttons they shouldn’t climbing into machines they defiantly shouldn’t and usually expiring in some chuckle inducing way. There is also a monkey, that damned monkey! that gets loose at some point and roves the ship hunting for banana’s and stealing vital equipment, both the monkey! and crew are controlled via a simple flow chart that dictates what their behavior is dependent on where they are and what is the current tragedy befalling the ship at that time, its a simple but effective mechanism but it did slow the game in the early stages (at least until some of the crew had fed themselves to the launch tubes) whilst we had to keep referring to the chart (Greg – maybe put it on the board).

The prototype board (not mine)

The meat of the game is you trying to plan ahead and move various objects or crew about to place them in specific rooms or activate items at certain times to fulfill those directives while all the others are doing the same, it quickly gets chaotic and often results in silent groans of frustration as some other player (or Monkey!) moves an item you’d carefully maneuvered into position over the last couple of rounds.

This is silly stuff and while playing I was reminded of the brilliant Dark Star the John Carpenter space comedy about hapless astronauts (go and watch it). This was a PNP version I’ve played and not the finished product and even with my shoddy blue peter like construction the fun of the game shined through.

For someone new to board games this will have a bit of an incline on its learning curve as it throws in quite a few mechanics from other games, but none of them are especially complex and within a few turns most players will have a grasp on what it is they are doing. Â I think only on further plays will the deeper strategy start to be revealed and then its going to get nasty!

Go and check out the Kickstarter page (pledge a Â£5 and you can download a version) and give it a whirl and support a homegrown designer.