previous
The Horror!
random
next
Stuff we encountered in 2017.
3926 views 0 likes 0 comments 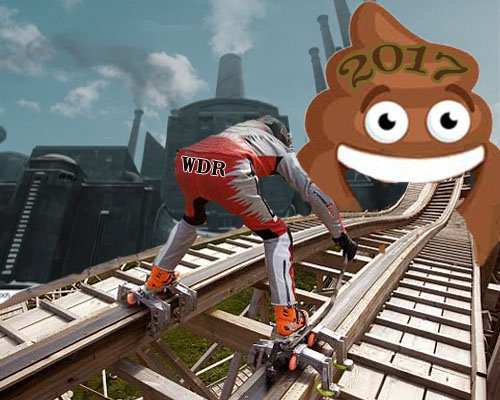 Next year Who Dares Rolls will be celebrating its sixth birthday. Yes, unbelievably we’ve been around that long, by the law of averages just by existing we should have a bigger audience than we have. It has to be said we’ve managed with no real effort, to stay firmly below the radar.

And you know what? I’m alright with that.

Running a blog, creating content be it written, filmed or spoken takes time and effort and to keep doing it also more than a pinch of passion. I doth my cap to all of my fellow content creators out there soldiering on against unrelenting odds. In just the last few years hundreds maybe thousands of channels have appeared all shouting to rise above the deafening clatter of board game media. Getting noticed these days is really starting to be hard work, priding ourselves as we do with the work ethic of “The Dude” just thinking about this stuff it’s exhausting.

All of that being said, 2017 even for us has been a bit sparse on content. And for that to you our wonderful lurkers the audience I apologise and in no way a justification for my slovenly behaviour I have to say 2017 has personally been a roller coaster through a shit factory. OK, that sounds like things were terrible throughout and while a mile wide river of steaming rancid poop does flow throughout my recollections of this year there are moments of joy. Or to stick within this stupid metaphor (seriously what on earth) the torrents of turds were interspersed with occasional long warm showers in a really swanky bathroom. This is coming off really not as deep as intended, I was going for feels and now we have this awkward plop smeared analogy. let’s just skip to the next paragraph and pretend that none of this happened.

We kicked off 2017 with something new a trip in an ambulance! Yes, I was briefly hospitalized following rather overdoing it a bit at work. There’s nothing quite like your body doing its very best impression of the blue screen of death while you really had more important things to be doing to sort of put things into perspective. Despite attempting to retain a stiff upper lip it’s hard to sound authoritative or sensible as you slide off a chair dribbling. What little dignity remained I invested in recuperating and a visit to Airecon for the first time and I even submitted a report on it!

Then everything goes sideways or to keep things thematic a great big shower of shite happens when my workplace relationship of over a decade imploded in the sort of behaviour beloved of employment tribunals. After a prolonged bout of gardening leave, I was faced with the very real probability of being unemployed. If this was a weather forecast the entire British Isles would currently be smeared in shit, which also works as a great analogy for the UK Post Brexit.

The one bright light at this dismal time or gleaming bidet (never-mind) was the UK Games EXPO what has become my home from home in Birmingham and the chance to meet up with my extended gaming family. Much ballyhoo and shenanigans took place and we even recorded our very first live show before a small but lovely audience, this was some much-needed chicken soup for my soul and hopefully, we can do that again.

So with the job situation barrelling head first toward the cliff edge and feeling less like the glorious uplifting nosedive of Thelma and Louise and more like that poor old coyote taking another dirt nap I hit the ejector button. When I finally landed I had unbelievably landed the dream job of working in the industry as the UK Regional Manager for Dized.

Dized was great, heck wonderful I was being paid to do what I loved and while it was a short and wild ride it was worth the trip. When situations out of everyone’s control resulted in the marketing teams time with Dized cut ever so short I once again found myself with the prospect of not having a job.

Strangely this wasn’t as debilitating as maybe it should have been I was becoming an old hand at this bumming around and so was probably far more relaxed than I really should have been, I like to think of this as my Caine from Kung Fu stage, insomuch if he did less wandering the land dispensing justice, and just well sprawled on the sofa, you know Netflix and chill (but like actually chilling on my arse watching Netflix ).

Which brings us pretty much up to date. You find me working for a local escape room dallying with game design and all sorts of creative stuff like world building and set dressing. Its a wonderful job with some of the best and very creative people and it feels like home. We have some ideas, some great ideas that hopefully I’ll get in the coming years to share with you. But for the time being, you’ll just going to have to take my word for it.

Now, this isn’t to say that I’ve not still played plenty of games, I’ve just not written about it, but it’s not like there’s been a shortage of other people doing that. Having spent most of the year neck deep in emotional sewage I’ve just taken a bit of a break from stuff. However, I’m planning on putting together a small piece on my highlights of 2017 and that’ll be up in the coming week I’m sure. For the moment I’m enjoying a Christmas off with my family (the first in 10 years) and really that’s as far as my plans stretch.

So to bring it back to what I was saying some paragraphs ago, we’re not going anywhere. And when it does finally come time for Who Dares Rolls to bow out then it won’t be quiet, it’ll be loud, rude and undoubtedly stupid, just how we like it.

So it’s a merry festive happy holiday from all of us here at Who Dares Rolls, huge thanks for all our guests and hangers-on this year including everyone’s favourite gaming Uncle Tony and esteemed designer Andrew Harmon then there’s Charlie, Ben, Jaime, Tony, Phil and my Brother from another Gaming mother Nate and of course all of you our audience.