The Parkers Play Camel Up

Aside from all that board gaming and RPG shenanigans Charlie has also found time to author a series of short stories and a book all about a dysfunctional bunch of super heroes trying to find their place on earth. Think of it as Buffy meets X-Men with a side order of Scott Pilgrim. Anyway he has dropped a board game flavoured mini episode for your entertainment. And there are some links at the bottom if you want to go and explore more of the Lightning universe.

Buzz cleared his paperwork off the dining table and stacked the cardboard money and tiles. He worked around Helen’s cup of coffee, knowing she wasn’t going to help out any time soon or even get out of the way.

“Why are we doing this?” Buzz said.

“Joe and Shades are at their nerd thing.”

Buzz looked through the door to the kitchen and the Buffy commemorative plates, “Not that you’d have a leg to stand on if you tried.”

“Anyway, I thought we could do a nerd thing of our own; you, me and Lena.”

“He’s all alone this weekend. His kids are off doing something probably much cooler than mine are. I thought he’d like to come along.”

Buzz huffed and rummaged through the box for the elastic band which had come loose from the pyramid again. He loaded it up with dice and placed it in the centre of the board.

“Just checking to see if there’s been any errata. Are you going to summon Lena?”

“I texted her if that’s what you mean.”

Buzz could already hear the thudding of Lena making her way down. He rolled his eyes and waited at the table. He wasn’t a fan of Camel Up at the best of times, but hosting it for Nick Morton was salt in the wound.

Buzz opened the door while Lena finished explaining the rules to her mother. It was dark out and Nick was dressed like he was heading to a dinner party instead of a board game night. He held up a bottle of whiskey, “I brought a twelve year Glenlivet. Slumming it, I know, but this is a casual night.”

“You know Helen’s in AA and I don’t drink whiskey.”

“Well could you bring me a glass and I shall make a start on your behalf. I assume the Parker children have not begun to drink.”

“You assume right; they’re fifteen. Oh, I sent you a Dropbox link with the rules, did you read them?”

Nick gave a superior sniff of a laugh, “I conquered planets centuries before you were born, I think I can cope with some stupid camel racing game.”

“Fine, get Lena to tell you the rules, I’ll put the kettle on and get you a glass,” he tried to glare past Nick to Helen. He wasn’t comfortable with the man who destroyed their world in the house, even if they’d been on speaking terms for the last half decade.

Buzz watched Nick trying to make a decision. Lena shook the dice inside the pyramid, hoping to force his hand by being annoying.

Nick said, “Why are we playing a dice game?”

Lena kept shaking the pyramid and said, “Helen won’t play any skill-based games with Uncle Buzz. His brain’s like a supercomputer. Games of chance only, or weird arty ones like Dixit.”

“Powers aren’t allowed at the gaming table,” Buzz said, “Even if some of us can’t help it.”

“I want to start the racing bit, have you made a decision?”

Nick shook his head and dropped his betting chits, “I cannot find out how well or badly a camel will do. There is no point in gambling. Can I impede it?”

“There’s the little token to boost or slow down camels.”

“A token? What about barbed wire? Poison? This is nothing like real life animal gambling. I assume we will not eat the losing camel?”

Buzz looked at Helen and quietly said, “This is why I don’t invite my human partners here.”

“Human partners?” Helen laughed. “Can you sound any more inhuman? Also some random from the internet is hardly a partner.”

“I have made a decision,” Nick said. He gave the kind of grin which made it surprising he didn’t have fangs. He stroked his beard and then worked his magic. 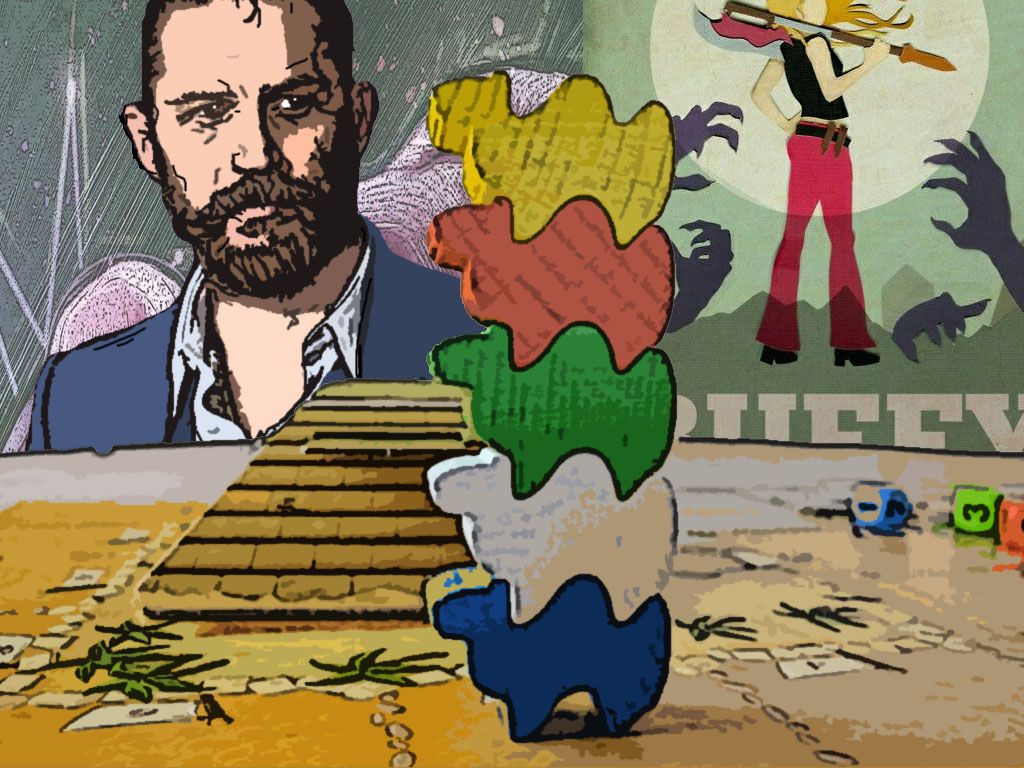 The door kept the spiders at bay for now and while the dining room was rarely used by the Parkers, they couldn’t just give it up to them. Buzz tried looking through the keyhole. “Does your power wear off?” he asked Nick.

“Could you have maybe not turned the little wooden camels into spiders?”

“The spiders are the same colour as the camels, I thought you would like the attention to detail.”

“I don’t get why we let you in the house, sometimes.”

“Your sister-in-law and I are friends. Also the help at my home are used to this sort of thing. My little surprises for them have become boring over time. I need to get entertainment somehow.”

Helen returned to the hallway, shoving her daughter as she went.

“I don’t get why you’re scared of spiders, you’re invincible.”

“They’re all wriggly and bitey and ugh…”

“You’re the only one who can go in there safely. Turn that fear into anger and crush those spiders.”

“It’s that or wait for your brother to get back and you know he’ll be worse at it.”

“Fine,” Lena said and was pushed through the doorway before she could say anything else.

“See you tomorrow,” he waved as he walked out the door.

There were screams from the dining room, following by stamping sounds. Buzz said, “She’s going to wreck the room.”

“Probably. It can’t be worse than when we tried Settlers of Catan.”

“Because the house isn’t on fire?”

“Because the house isn’t on fire yet.”

“I’ll get the fire extinguisher, just in case.”

Lightning is a story of Power and Irresponsibility as super-powered people from another world hide (badly) on Earth.

You can read free short stories set in this world at Lightning Tales.

You can buy the main series on Amazon, starting with Crash Day, set a year after this story. You can buy Crash Day here