by Charlie Etheridge-Nunn on January 9, 2018 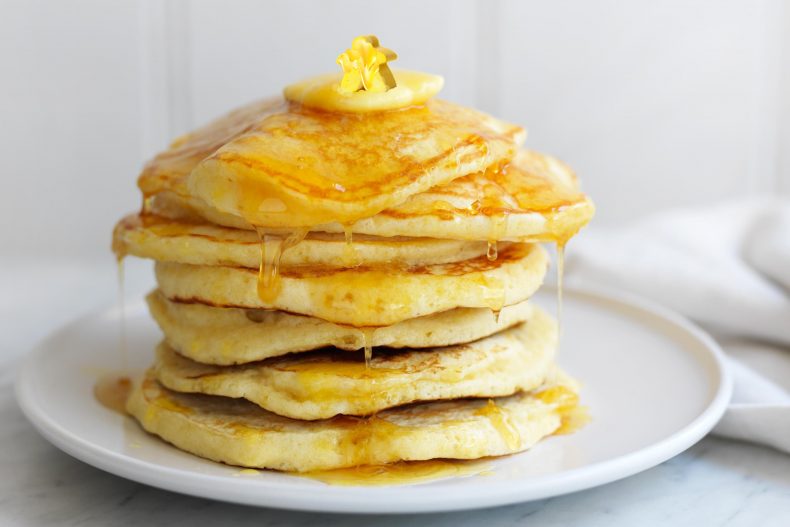 Board games can be marvellous things, with cardboard, plastic and wood replicating vineyards, wars, civilisations and more. They are a wonderful experience and something I always heartily recommend to people as a social experience to have with friends (or sometimes solo, if you’ve read any of my ‘playing with ourselves’ articles .

There’s one aspect of this experience which hasn’t really been covered to any satisfactory level. When you’re playing a board game and it’s really engaging, but you’re a relentless fidget. Your hands end up stacking up dice and playing pieces, ideally into nice patterns or representing different things. It’s something pretty idle, but it’s something I often end up doing just because it’s that or bother my phone between turns. Yes, I am that player.

I thought I’d present to you some of the most fun pieces in board games to fidget with and stack into piles during games. Never let it be said that we at Who Dares Rolls aren’t willing to cover the more serious topics related to gaming.

My criteria for useful fidgeting components are:

Diversity/Uniformity of pieces – Either of these is great. If all the pieces are the same then sometimes those can be the best ones to make into patterns or piles. A really diverse group of playing pieces can be very satisfying to stack up though, like when you start figuring out which different-sided dice should go in a pile because of their different surface areas.

Subtlety – I may be a relentless fidget, but I’m not a dick. You need to be able to do this without distracting people from the game or without interrupting the play itself.

Adaptability – These are game components you’re playing with, so any one of them could be taken at any time. Sure, sometimes you can pick different pieces for your stack based on their likelihood of being used, but as a whole whatever you do should be able to get taken apart and changed at any time.

Cards are sadly almost always off the table. As much as I loved building houses of cards as a child, they take up space, generally you’ll be using your hand of cards which you should be playing, and the tension of whether they fall or not will be a distraction.

Here are some of my favourite games showing these elements: 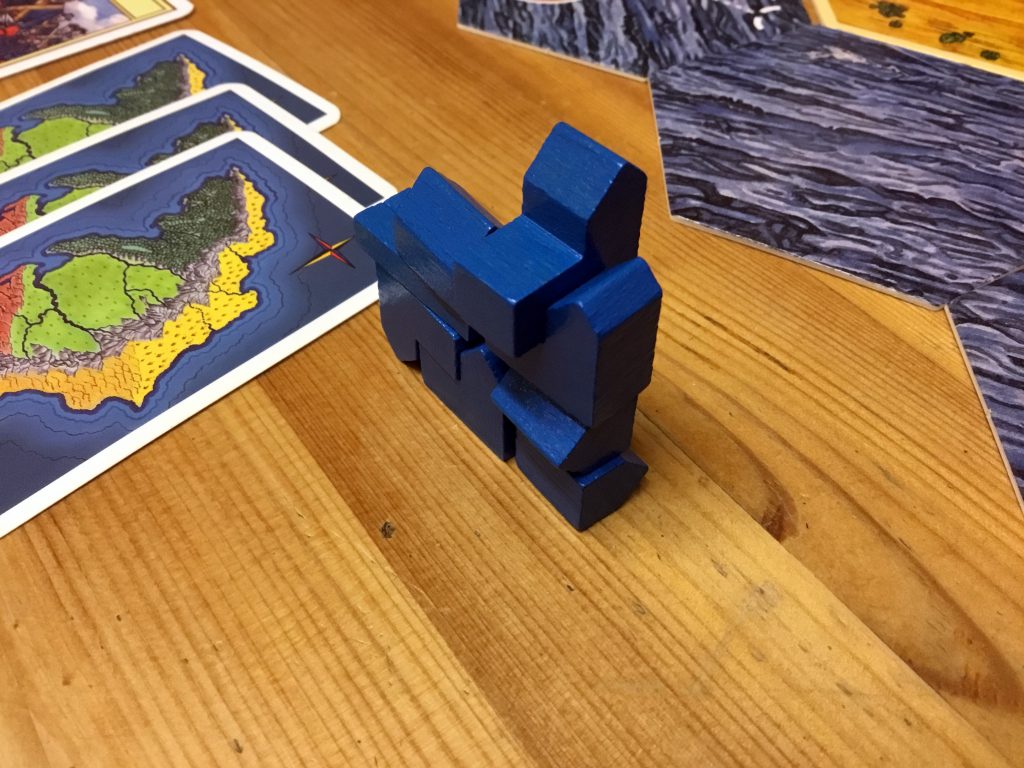 There’s something quite satisfying about the way the villages and towns fit together to make rectangular blocks. This means you can fit them all together in different rectangular patterns or change those up in order to make the occasional spire or pointed roof to your creation. The small wooden pieces for the roads allows you to have bridges between pieces or long, flat platforms to put between rectangles. 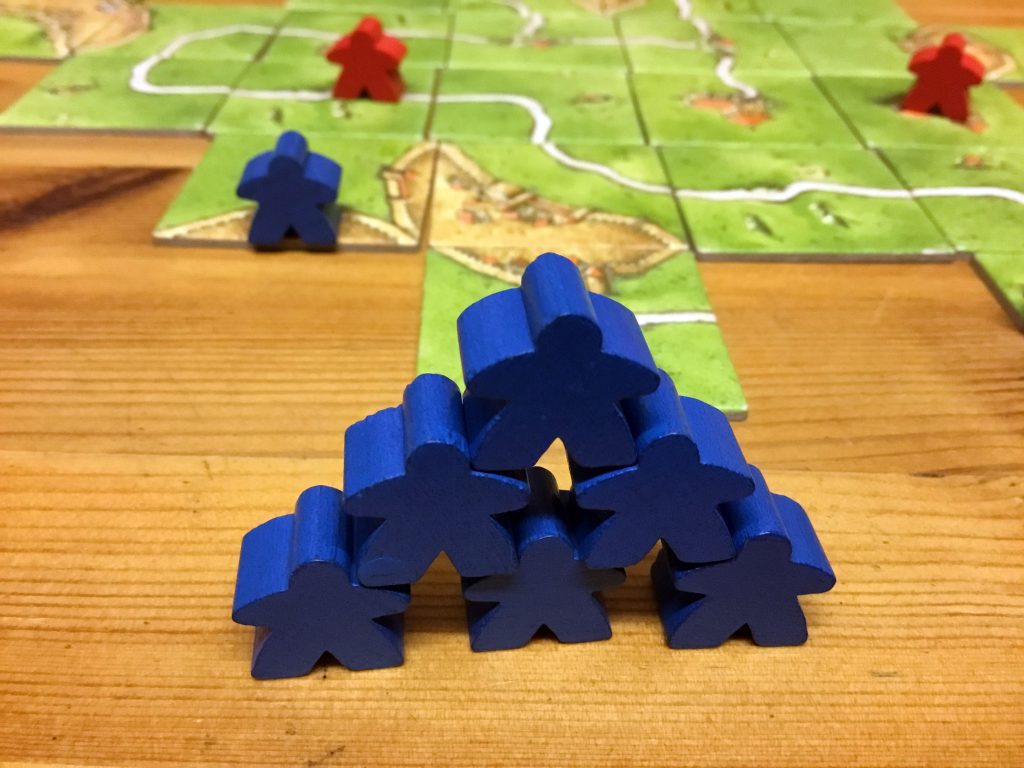 Carcassonne (or any game with a whole ton of meeples)

This is where the uniformity comes in. The meeple is a great shape for these kinds of exercises. They’re rounded enough to make stacking tricky, but not impossible. You can make meeple pyramids with them, or maybe synchronised swimming style patterns. Maybe even a line of them matched up back to back to make a single columnar meeple, A meeple centipede to horrify the other players with. 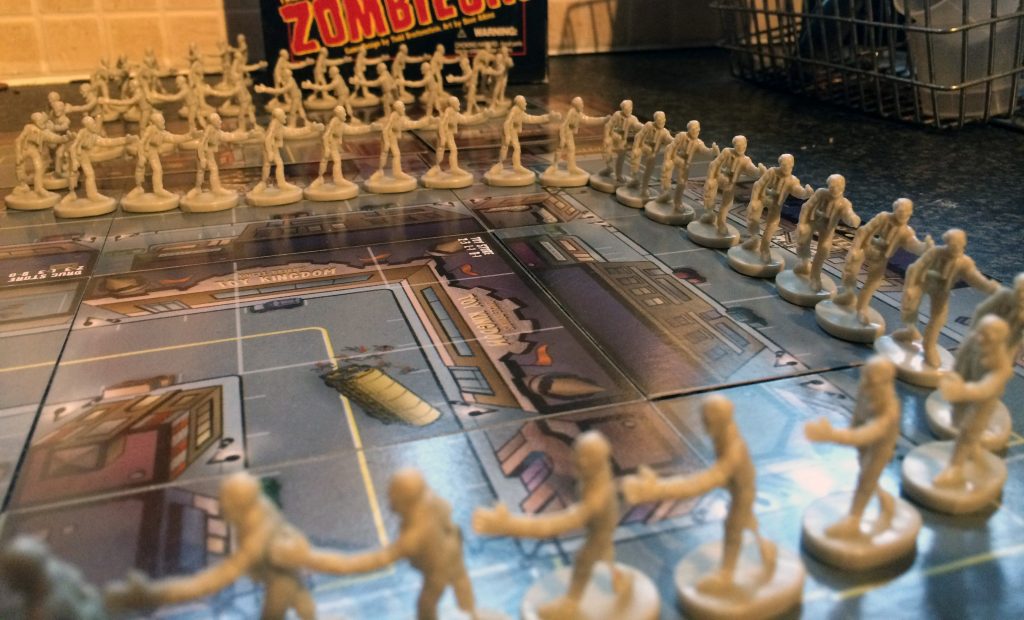 I’m going to do the unthinkable and compliment Zombies!!! on the site. The Brietensteins were genuinely lovely people when I met them in GenCon UK many years ago, but this game is one which dropped off my game playing list like a rock. It has a lot of problems and while it’s probably fixable, I’m not going to set about doing that myself. Still, the pieces are great. The zombies all have one arm reaching out, but if you line them up then they can start doing a conga line. Much like the meeples they can be posed like synchronised swimmers, or maybe participants in a ceilidh, all putting their hands in the centre of a circle. It’s more fun than you’ll have with the game once you’ve discovered other board games exist. 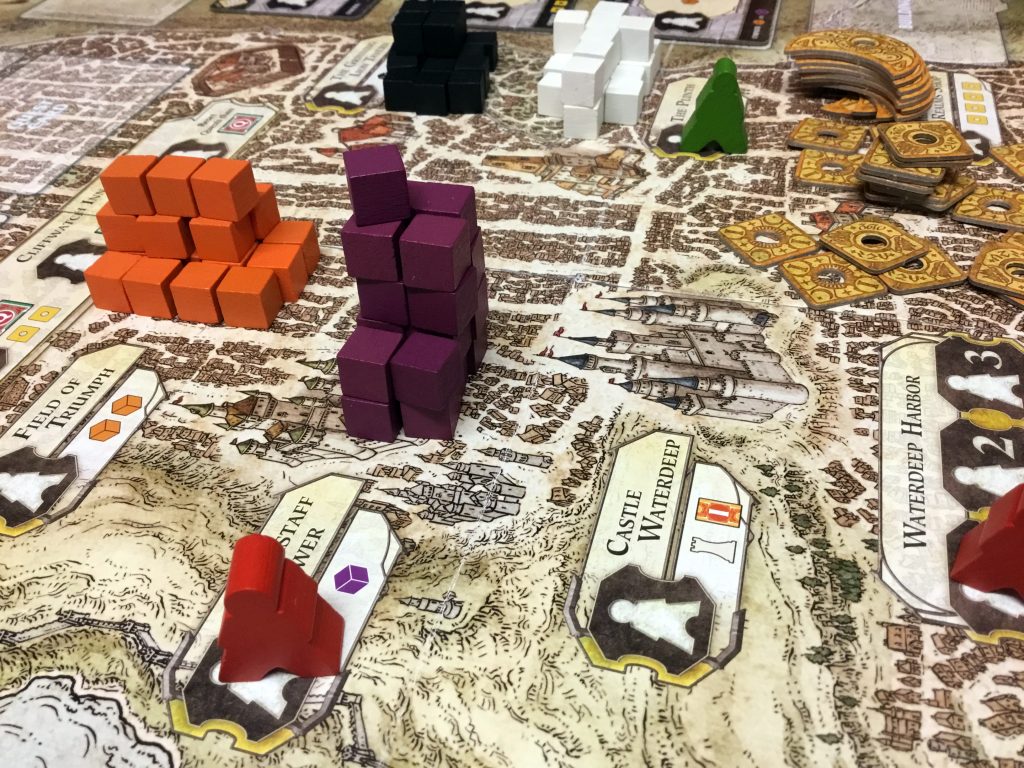 This is going to shake things up a bit. The Agents (meeples) are getting used constantly and the resources are too liquid to keep around to build things out of. Instead, if no one else is doing it, stack up the different sets of cubes into shapes. As I pour all the cubes into vague groups by the action spaces they use, they tend to scatter about and get everywhere. By making rough buildings out of the cubes you’re keeping them together for everyone’s easy access and you’re doing something while a player’s taking forever with their analysis paralysis. 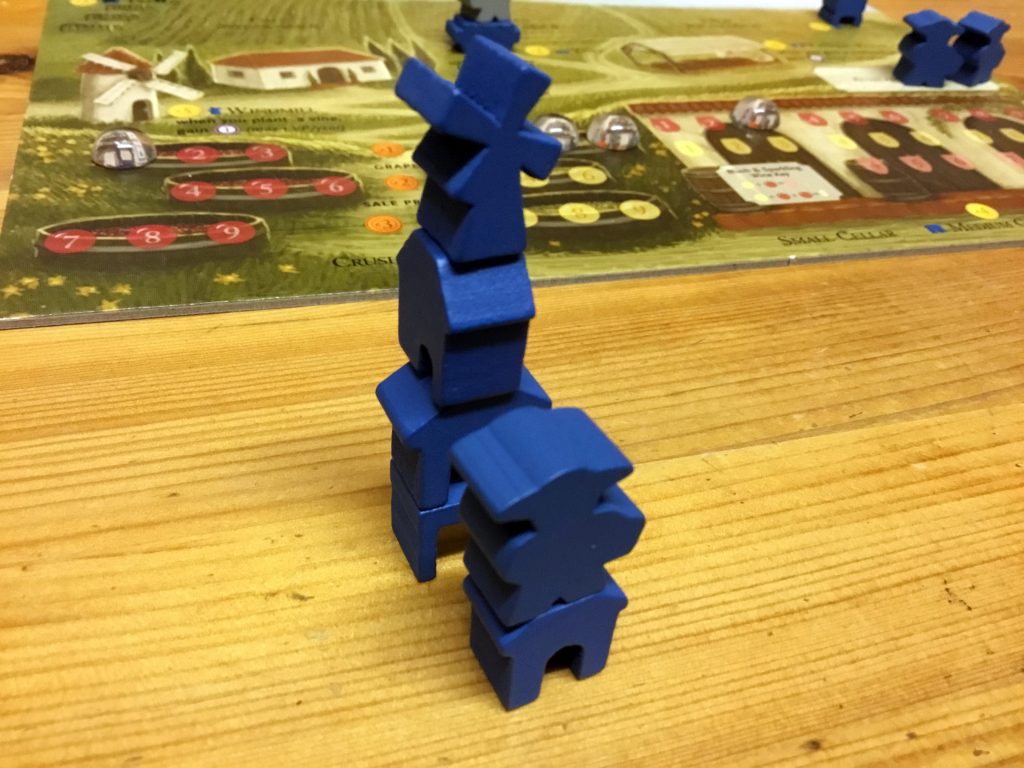 This is a game where the diversity of pieces is great. Compared to Scythe where every component has its place, Viticulture has so many bits which lurk just away from your tableau and some which will never see use. They’re all different to each other and finding new combinations which can be stacked up can be very satisfying. You can end up playing quite a long game with the structures you’ll build in front of you. There’s also a good opportunity to prioritise the smaller, cheaper pieces at the top of the stack. When you’re playing the game itself you can also use the Yoke as a little skateboard for your meeple and you’re technically not disrupting your game as you’re doing that to show the meeple is being assigned to that space. 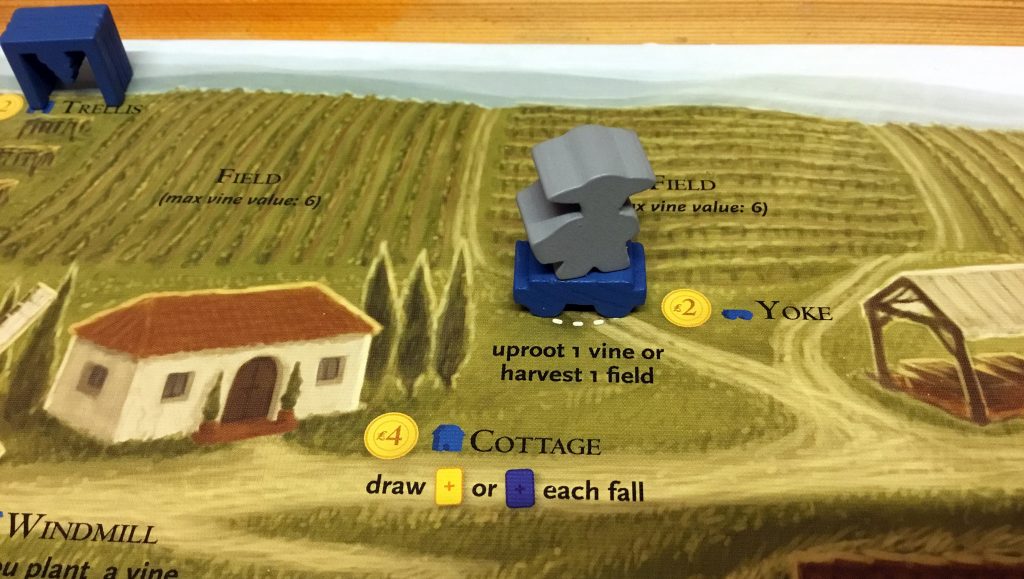 An expanded Viticulture is also really good with the metal coins, as well as Scythe’s, as they’re really satisfying to fidget with. 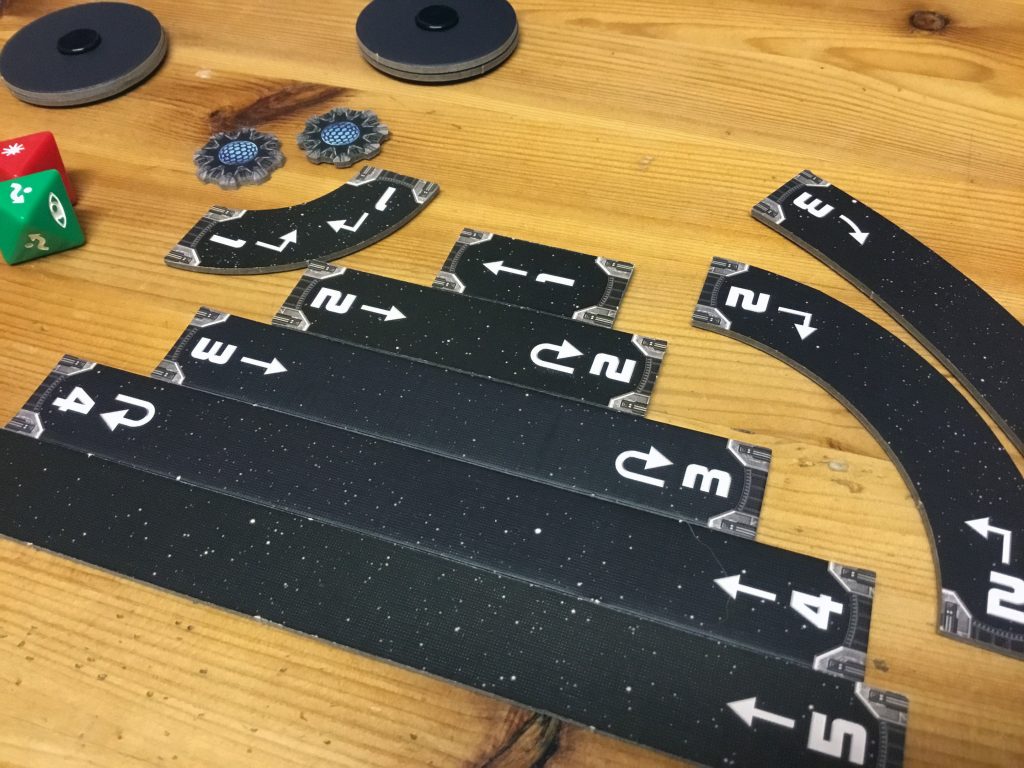 There are fewer components to fiddle with here, right? Wrong! The range rulers and often make nice little piles or patterns. Well, they would do, if I didn’t need a lot of them while steering wildly into ships and asteroids. I’m not very good at X-Wing. This photo is fairly limited, admittedly, as it’s all I have left of my rulers. I’ve got rid of a lot of X-Wing. 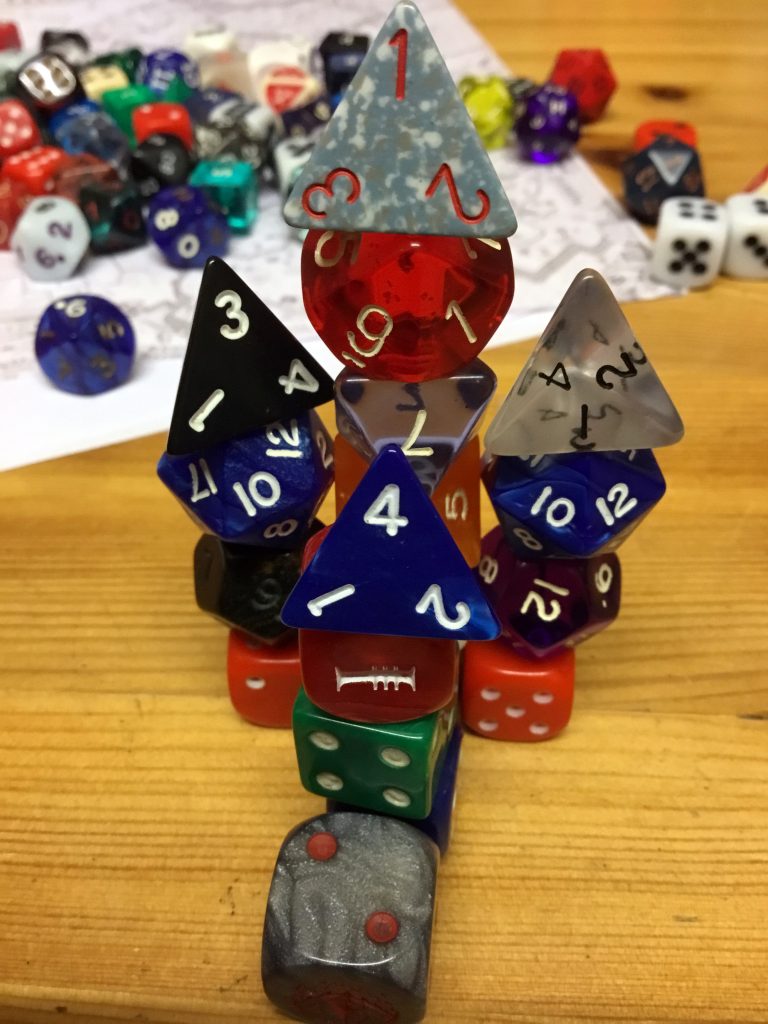 Dice and tokens are great fidgeting accessories. You can build nice piles of dice with the multi-sided polyhedrons, although the d4’s are almost always going to be on the top of your stack. You can build neat towers this way and even a cool looking dice city. This is something I plan on using in an Assassin’s Creed style micro-RPG in the near future. I’ve been favouring the games where the GM doesn’t actually roll any dice, so that’s where tokens have come in as a substitute, even if it’s just a case of playing with a couple of them. As you’ll likely have seen in most of my RPG reviews, my tokens of choice are Houses of the Blooded’s Fate Tokens from their Wilderness Kickstarter. They’re thinner than poker chips but thicker than a lot of plastic or card tokens. They are often used as Fate (in Fate), Drama (in 7th Sea) and Forward or Ongoing (in PbtA games). Oh and blood currently, in my Dungeon World campaign, as we have a paladin who needs to consume blood for some of his abilities.

You’ve seen a few of my piles of components here. Tweet us with your own pictures of mid-game stacks of components @WhoDaresRolls to show off your balancing skills!

0 likes
article, News
Better than playing with your phoneFidgetingStacking