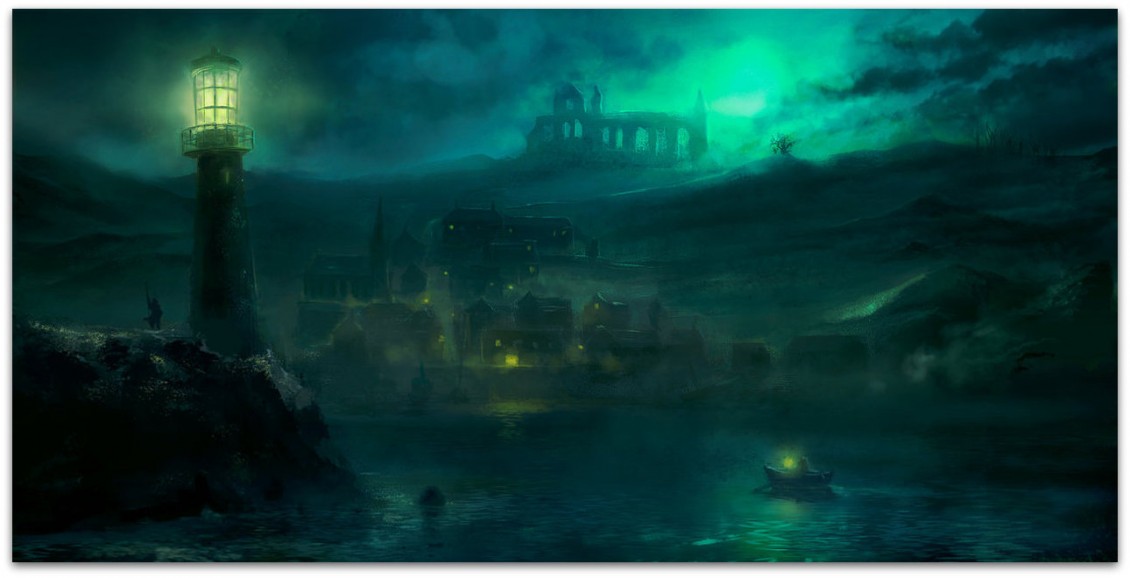 Jacob as Doc Roberts (’Doc’ may actually be his first name instead of his title), The Salesman

The investigators entered Ebon Eaves, a town in the grip of local gangster Tommy Magellan. He seemed to be using the psychic aunt of Fred Barrows for nefarious purposes. A strange chemical company has been buying up property north of the river and five-foot lobster wasps. The group planned to investigate the mental hospital and the library, while hanging out in the diner.

Steve went on hiatus with the group and in his place we have a returning member of the In-Fighters; Josh. He’s a local actor, potentially a GM for the group in the future and his characters had a habit of dying when he was last with us. He asked about the situation the group was in and what they needed. I explained all this and he created Sam Star, a local boy who’s come back with the intention of becoming mayor. Sam was a cunning politician who’s willing to get his hands dirty, although even he didn’t know how bad things would get.

While the group were still in the diner, chatting away over a mountain of pancakes, Sam entered and started eyeing up people who might be future voters. He saw Wendell and the other fishermen and made friends with them right away. He brought up being a local man whose father was a good friend to the fishermen. Once he was done chattering with them he saw the group of ne’er do wells hanging out in a booth. They looked like a bunch of people who could do dodgy work with no questions asked and no ties to anyone important in town… so basically player characters. Sam decided that after charming the fishermen, he needed to get the local delinquents on side. He started chatting with them about his return to the town and his plans. The town had the potential to be a tourist haven and needed the railyard to be rebuilt. Doc and Dusty’s eyes widened at the prospect, they insisted that only death lurked there in the form of giant red crab monsters, something Hands quickly brushed off, wondering what Sam could do for them. He offered a tour of the town which they’d hardly had a chance to see; starting with the Stonemount Crypts. Sam also discussed the potential of cash in hand work for the kind of activities which should go unknown by the law. At that point I mentioned that the ‘camera’ of this scene panned to show Gerry who’d sat quietly through the entire thing. He excused himself and went to work, so the others could talk. 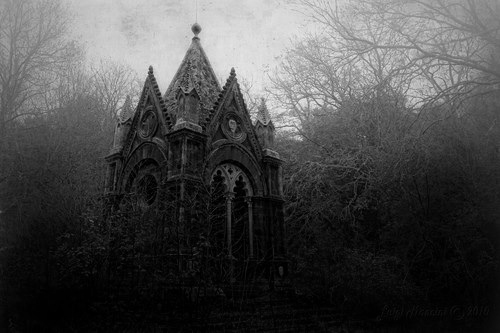 The trip up to the Stonemount Crypts was fairly short and the day was definitely one worthy of a jaunt to a rocky isle filled with dead people. They walked along the massive mechanical bridge to the isle where the graves stood a few feet above ground. Given the description on the plaque that they were seven feet above sea level, there was a lot of debate about whether that was at high tide or not. Apparently the populace of Ebon Eaves weren’t expecting pedants to show up. They looked around and started to see disrupted graves with clean handprints in the dirt built up on the tombs. Hands slipped on some muddy footprints which were larger than his, signs of recent interference. Dusty and Fred decided to use their combined hobo and gravedigging skills to open up one a slab covering a tomb. Inside was nothing. No body. Other graves were similarly absent of corpses, one of which had a scrap of cloth with strange writing on it. Doc turned to his book and understood that the cloth mentioned a tribute from the land people.

There was a crunch and the noise of gears turning… the bridge was being pulled back into the mainland, some mysterious figure was stood in the booth at the controls. Hands started to yell at the man inside, waving his gun around. I asked if he was threatening the person inside. Hands said he was.

Threatening in Tremulus, Apocalypse World and many of the other PbtA games works in a way where you can force people to either give in to your demands or take the punishment you offered. If you roll under a ten then there’s a level of compromise, but here, Hands rolled high enough that the man in the booth had to send the bridge back or get shot. He kept retracting the bridge and Hands shot him. Ash asked whether he would need to roll to hit the man. No. In these games, if a hit is a foregone conclusion, there is no need to roll. I asked him how many shots he fired into the booth where the man was helplessly stuck in place. Three bullets ripped through the structure and the man, stranding the group on the isle. That was the less smart side of the threat.

Scouting around, Sam found a small boat which could hold a couple of people. There was also a map which showed the lighthouse, mentioned, “locker three” and the statement, “praise the father of the waves”. Names on the map mentioned CF, BL, HV as allies and WW running interference. Hands and Sam rowed to the mainland and found a rough-hewn set of steps going up to where the booth was. 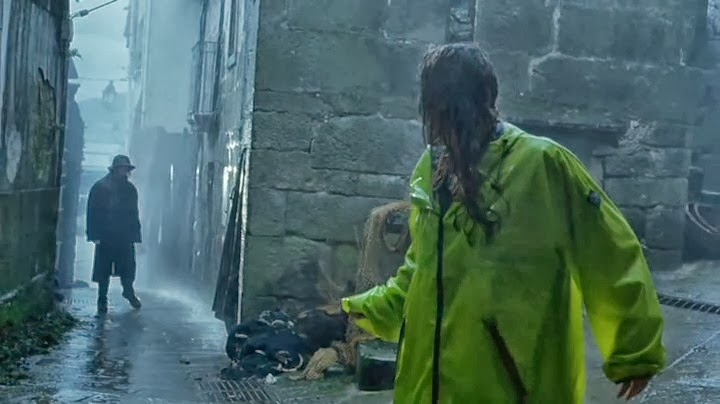 I thought a moment like this would be a good time for a quick break, went to the loo and when I was walking back into the lounge I could hear chatter of what they should do with the body in the booth. The popular choice was setting fire to it and next came the conversation about cover stories. They were planning on blaming Forrest as that would be one of Magellan’s right-hand men gone, too. The bridge was extended out to the island again and they lugged the body over to one of the graves which had been missing an occupant, then set fire to the booth. Sam already had a plan about this, he started running around the fishermen’s houses to get people to help. He kept adding, “Where’s the mayor in all of this?” while arranging a bucket brigade. Sam tried to convince the mob that they’d seen someone suspicious run off and he was charming enough to plant the fragments of the false statement through them all. He saw a local reporter, Jim Spencer, and tried to get a good photo of people helping out (with him in the centre, of course). Not helping were three people who were identified as Henry Vincente, Bruno Lane and Clifton (Cliffside Clifton, not Uptown Clifton). Two of them ran off into the maze of fishermen’s houses after clocking Sam and Hands. After witnessing this, Hands darted after them. He stopped before getting too far into the labyrinth of ramshackle homes, only to turn and see the third of the burly fishermen, fist raised, ready to strike… 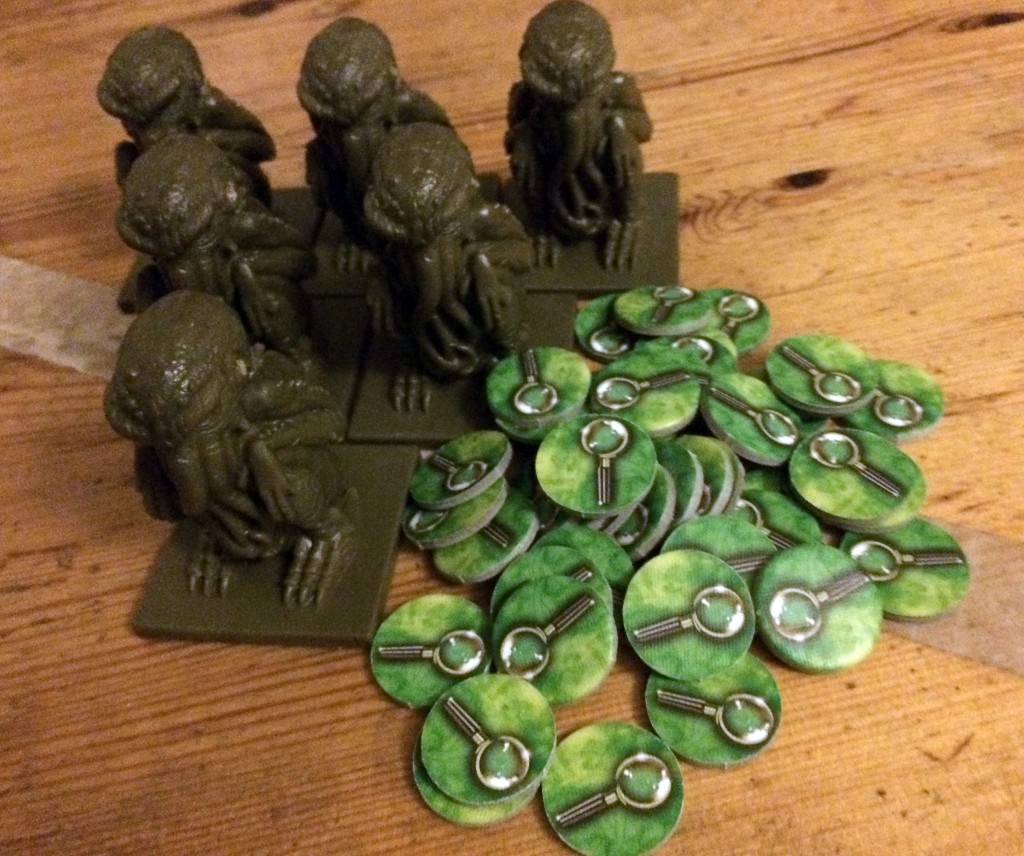 In Tremulus like other PbtA games, you bank ‘hard moves’ when players fail. These can be used instantly or saved up for later. For once I decided to let my players know when I had hard moves to spare, mainly as an intimidation tactic. I’ve been using little Cthulhus from the old Call of Cthulhu Living Card Game. I plucked up one of the Cthulhus I had saved up. The fisherman punched Hands right in the face. He was only hurt a little bit, but he rolled to see the effect of the damage and was knocked out cold, the other fishermen closing in on him…

Doc and Dusty meanwhile took the panic of the fire to sneak off and finally get a look at the library. Fred did the same with the museum.

Fred’s findings were slim but worrying; there were pictures up close of the museum. Every single stone it was built with had the same runes they’d seen on the scrap of cloth and in Doc’s creepy book.

Doc and Dusty entered the library and met Amanda Clementine, who worked there and wasn’t keen on them looking at the weird old tomes. That was of course, where they wanted to go. They found out that the upstairs was all off limits to the public and immediately went there. After poking around a bit, they found a moving bookshelf and a private room. They started to go through the paperwork and strange images held within. There were mentioned of something called, “Dagon”, a photo of Dr Whateley who originally owned Doc’s tome, several letters to the sheriff and a strange icon a like an ankh missing a section. Amanda started going up the stairs and they tried to flee the hidden office. Doc got out in time but shut the door behind him, leaving Dusty behind. He looked at more of the letters while Doc was distracting Amanda, right up until his last match went out, stranding him in the dark in the office.

This session went pretty well, I think. Sam was a definite injection of energy to the group and pushed them towards more of the hazards. A man was dead because of them and several dead people were apparently missing. While the things in the railyard and Gerry had gone unnoticed, there was a lot more direction. Hitting Hands and knocking him out was the first time I’d gone tough on them with a hard move and it worked a treat. With him kidnapped and Dusty isolated, it left them with a good cliffhanger.