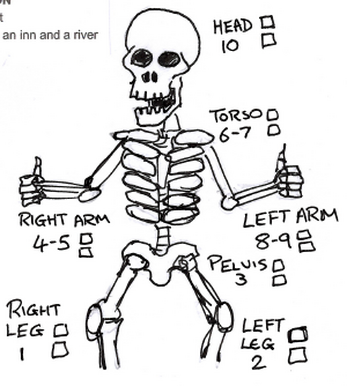 You are a party of skeletons who are bored of their humdrum life guarding a wizard’s hideout, so you’ve decided to go out adventuring! You’ve looted some items from people who invaded your home and are going out to the ‘human dungeon’ (or village) to seek your fortune.

This is a one-page RPG by Grant Howitt and Chris Taylor, originally meant as a bonus for people who backed the Tales of the Talking Skeletons Kickstarter which sadly didn’t fund. In that form it was two pages and a little different, but the one-pager is compressed down a bit from there.

The rules are simple. Like a lot of these games, you can read them yourself here:. The system is basically a target number you’re trying to hit with a d10 and you’ll be penalised for each body part you’re missing. If anyone hits you they hit you and a body part falls off. You can replace it easily enough, but if all the hit points are gone, then the part is broken. You’re so slow there’s no dodging attacked, but there’s a hit location roll which might hit body parts you no longer have.

Like some of the one-page RPGs before, there are a few absences in the rules which are easily patched up. There wasn’t anything for the HP of a replacement body part, so I just figured one would do.

I ran this game as a last minute backup after a couple of cancellations. I had dice and index cards, so the group were able to draw their own skeletons and modify them over time.

Lee played Gorbag, an orc skeleton who was very confused by the bow he’d taken from an elf in their cells. 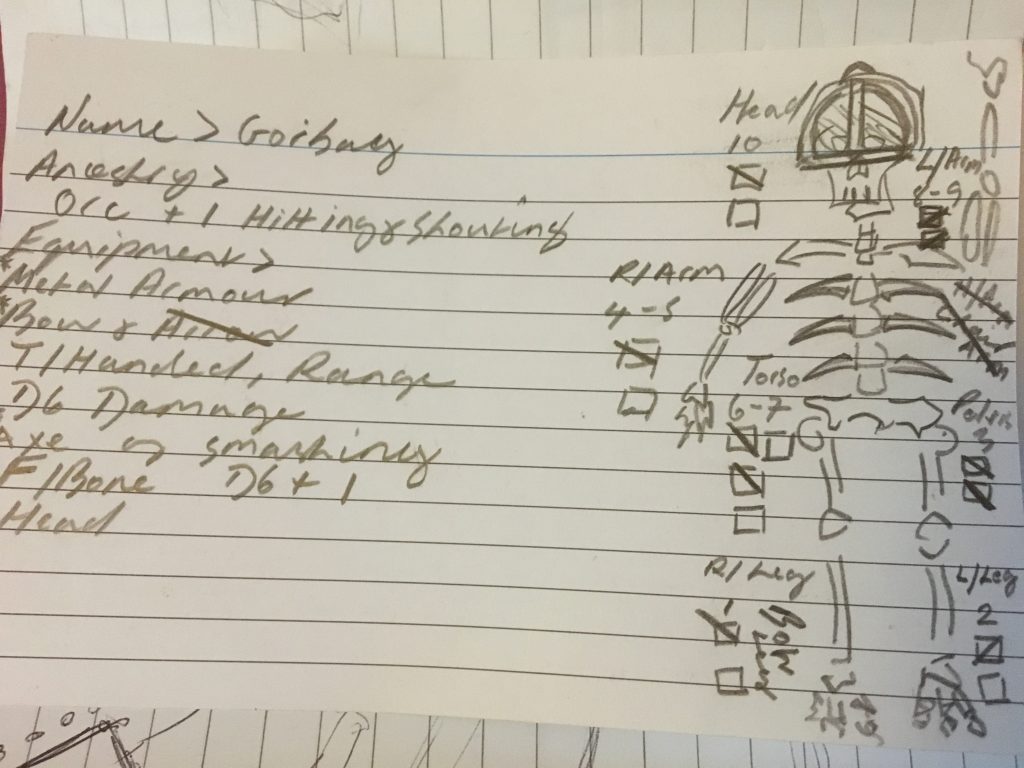 Mark played Oleg, a dwarf skeleton who was pretty sturdy and kept his beard. Or acquired a beard. It was left purposefully vague, but nonetheless, the dwarf skeleton had a beard. 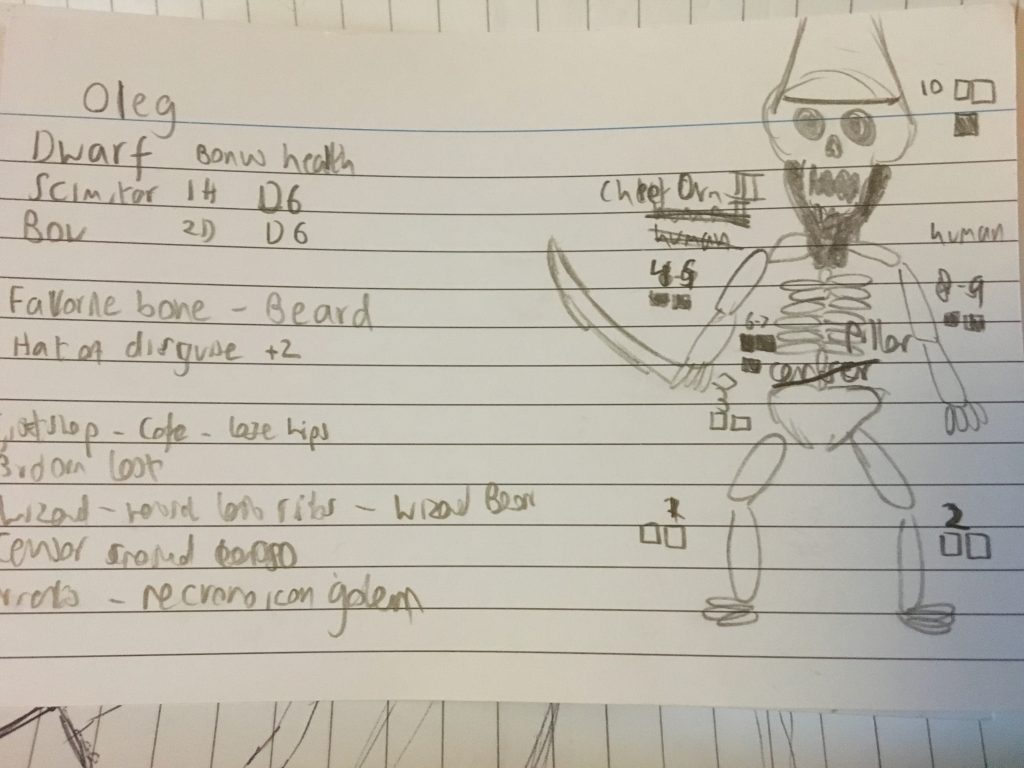 To read, this is short and fun like any other one-page RPG by Grant Howitt (and occasionally Chris Taylor, too). They’re great ideas and so far, each of the games I’ve run (Honey Heist, Jason Statham’s Big Vacation) have been real hits with the group. I know Honey Heist has seen a lot of positive attention and rightfully so, but it’s not a one-off success. As a last second replacement for a group or some light fun between campaigns, they’re perfect.

This write-up is based on the details taken down by Mark Gossage, who generously took notes for the whole thing, so I could focus on what on Earth I was doing next. While it’s a little longer than my usual anecdotes, for games in these recent reviews, I thought it would still be fun to include here:

Oleg the Dwarven Skeleton and Gorbag the Orc skeleton went on an adventure to the human dungeon (aka Village) to fight monsters, overcome traps and get loot. The nearby human dungeon had a grand library that was bound to be full of loot!

The side quest (aka the Druid farm [the druid himself was basically Alan Moore in our game – Charlie ]) turned out quite a challenge as we found out that stealth was difficult and sheepdogs love stealing your arms. Oleg managed to lose one arm to a sheepdog and the other arm as the failed attempt to steal the druids staff from him (the arm held on to the staff, but didn’t remain attached to the torso). So instead Gorbag threw a wooly thing (sheep) at the druid and then proceeded to smother him with another one. But the side quest was completed and Gorbag got himself a big choppy thing.

Next was the challenge of getting into the village, the team decide to use stealth. Gorbag chopped into the wooden wall while Oleg kept watch with a bow. When at last the wall is chopped through the guards were waiting on the other side and shot at the skeletons, managing to destroy both of their right arms! Oleg found himself unable to fire the bow instead threw the bow at one of the guards, knocking him out. He then stuffed an arrow into the arm socket and charged at another guard, impaling him.

The team continued on stealthily, because why not? Gorbag dressed in a guards tabard (moderately bloodstained), a guard’s helmet (it might have been too small, and was rammed crudely onto his skull) and a guard’s arm (because the guard didn’t need it and Gorbag did). Oleg was also disguised with a tabard, his wizard’s hat of disguise and a guard’s arm (which, being human sized was much longer than his shattered dwarven arm).

Needless to say this also didn’t go well and a fight broke out, first with a family who saw through their cunning disguises, then later the Monks of St Jason, defending the great library. One of whom kicked Oleg’s torso out from between his head and pelvis, so Oleg spent a lot of the battle chasing the kids who kicked his torso about and threw stones, while shouting the immortal battle cry “Give me back my ribs, they might be spare to you, but they matter to me” [it became clear fairly early that skeletons didn’t speak human, but that never stopped them trying – Charlie] Oleg has also managed to lose both arms (in 4 damage rolls, all four rolls hit arms) as he had been borrowing arms from the dead humans. Having re-attached his body, Oleg managed to lose it again and was attacked by one of the monks who used the body as an improvised weapon against him. Gorbag generally did a lot better having only once having to chase after a missing head and replacing his missing leg with the bow which he never really used anyway. 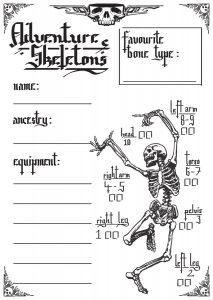 Deciding that subtlety doesn’t work they chopped their way through the glass window and barricades of the grand library’s giftshop, with Gorbag getting stuck on the barricade and leaving his pelvis and legs behind for a while. There was a pitched slaughter between the heroic skeletons and the evil gift shoppers and their leader; the cook. Oleg lost his second replacement right arm, but the cook generously ‘donated’ his arm to Oleg, and it came with a nice chopper [meat cleaver – Charlie ] too.

Later Oleg was Home Aloned by a swinging censer of incense which destroyed his torso, so he cunningly used the censer as a replacement torso, even if it made him a bit smaller. Gorbag lost an arm which was replaced with a broken chair, and his leg was pinned to a wall by a crossbow bolt. We reattached the leg (with bolt and piece of wall still attached) and continued on.

Reaching the final battle Oleg’s archery mastery allowed him to slay the high priestess, but it awakened a Necronomicon Golem [probably the most Necronomicons I’ve had in a single game – Charlie]. While Gorbag tried to delay the golem, Oleg attempted to slip past and grab the books of high magic (the treasure).

Oleg lost his censer torso, so he had to grab a foam display plinth as a temporary replacement. Gorbag was attacked by the golem destroying his pelvis with acid breath and separating the legs from the rest of the body. But still he battled on, legs kicking away while his arms hacked with the axe. The golem then proceeded to knock the body and head apart.

Oleg escaped, with prize in hand, kicking Gorbag’s head down the stairs as he went. They quickly escaped by attaching Gorbags head to the body of a wizard who they killed in the library.

And so, our duo escaped. Oleg with the cooks arm (still with chopper) and an arm from a bystander and a display plinth in place of a torso. Gorbag with a whole new wizard body, and a wizards head still attached because they didn’t have time to remove it.

That was Mark’s account, and when the evil wizard finally came back to check on his hideout, he was very confused by the state of his underlings and the many ‘treasures’ they’d brought back.

You can find the one-page RPGs at Rowan Rook & Decard’s site . It has been extremely difficult not to write ‘skellingtons’ throughout this whole review, I hope you appreciate this.