In this knee trembler of an episode Mike and Nate are joined by Phil our listener begging the question who really is listening if we’re all on the episode.

Discussed are What’s been played including Sub Rosa,Ominoes,City of Iron 2nd Edition,They Come Unseen and Saltlands.

Recent game announcements get everyone in a tizzy over Godfather and Goonies the adventure card game, Kickstarter and Mike has yet another rant about Two Rooms and a Boom.

In this episodes Main Event we argue over Art and Design in board games, what are our favourites and does this really effect whether we would buy a game or not. 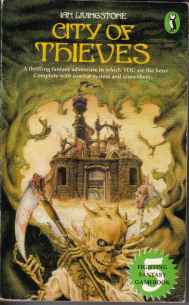 And much rejoicing at the return of the Game Book as we delve into the trash strewn gutters and dodgy alleyways of Port Blacksand in Ian Livingstones Classic City of Thieves.

WDR MJ 25 September
Be the first to comment!
Leave a reply »