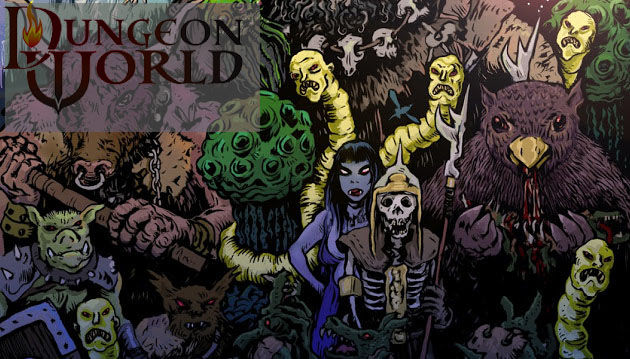 Lee as Ethan Gale, unrepentant defender of his way-too-lawful bosses.

Vinnie as Bryan Weaver, Goblin poisoner addicted to his own stash.

Josh as (Fight the) Goodfight, an elemental mess.

And introducing Amy as Snow, a gap-year barbarian.

A band of heroes took down members of a cult, took part-ownership in a tavern and have found a man who exploded living crystals at them. A mystery is afoot!

Before we get into the session, a couple of things. First of all Amy joined our group, she’s Josh’s girlfriend and the pair are local actors. She’d roleplayed before, but nothing Powered by the Apocalypse. For these sessions, she used a basic class rather than a Class Warfare one, just for swiftness of getting her involved with the game. If we return for season two and her character’s still around, I’ll encourage her building a Class Warfare version. One of the two characters who died resorted to a basic class as well, while the other had a week to prepare and made their own. We’re fairly easy going with these kind of things in the group.

Amy’s character was a barbarian called Snow, originating from outside of Exodus and in here as part of a kind of barbarian gap year. She carried some squirrels with her and spoke to animals.

The second thing is that there’s not been enough world-building. I love world-building, especially when players are heavily involved with it. The group knew a bunch of things which were in The Emerald District where their homes were, but had no clue about the neighbouring environs. Neither did I. As the group were going to be travelling, this seemed like a perfect time to determine what was around them. The city of Exodus is basically a Mega-City One sized fantasy city, so there’s a lot out there. The districts or ‘quints’ were each the size of a giant city, but not all of them had to be urban. There were forests, swamps, abandoned areas. The group took the map and made the following narrative cuts into it. 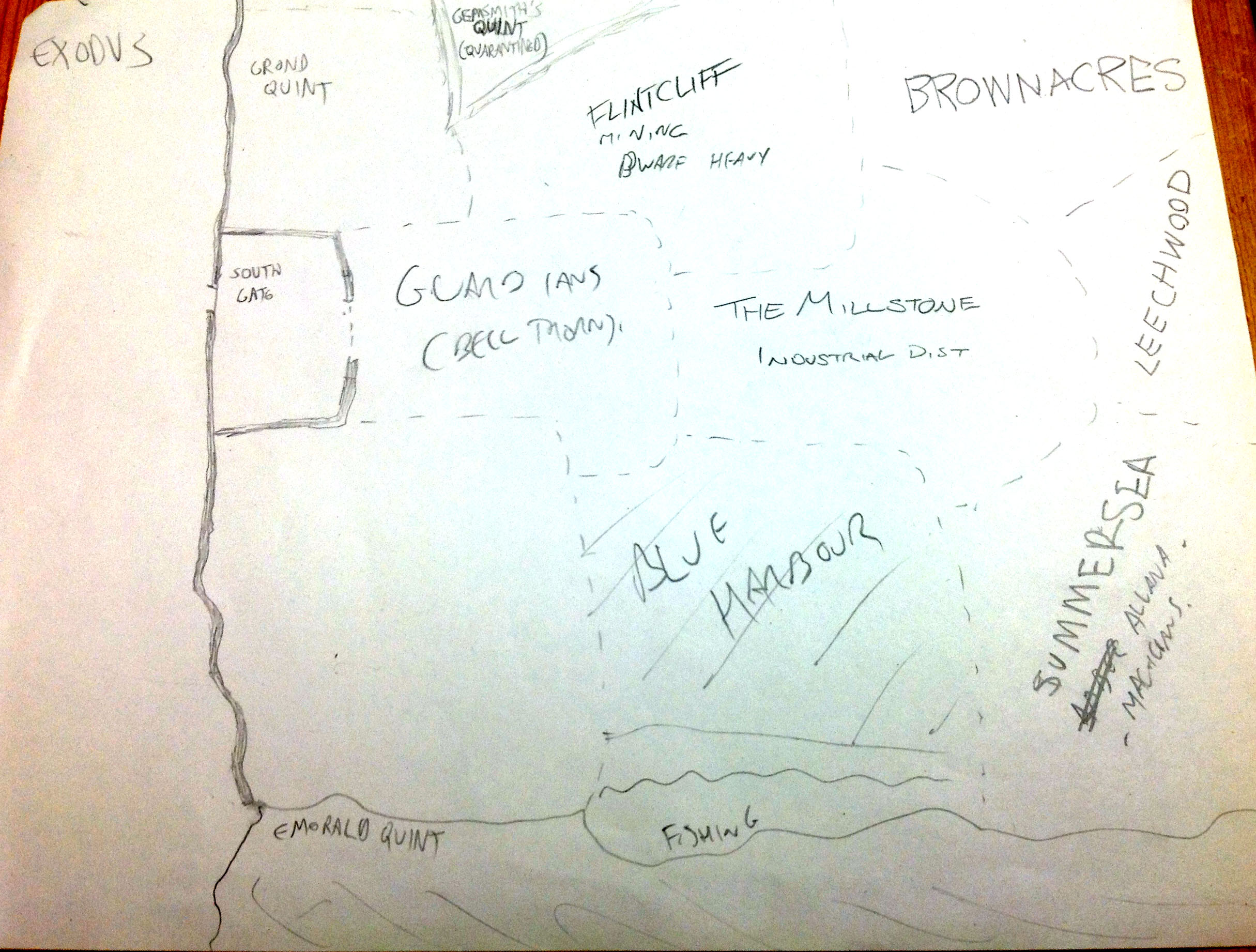 Leechwood – Swampy, filled with farms but actually nicer than you’d think given the name. A lot of people go out that way to retire.

Blue Harbour – A fishing district between Summersea and the Emerald District. The coast road has more affordable fancy homes because of the proximity to the industrial area and commute to anywhere nice.

The Millstone – I have no notes here. I just have a name, so that’s going to be fun when we have to go there.

The Guardians Quint – Worshippers of Bellthorn, the god of war. They protect the Gate Quint and often train guards for other areas.

Flintcliff – Exodus isn’t flat terrain. There’s a cliff within the territory, which the dwarves mine heavily.

We’d also started to question a few things about The Emerald District itself. The group are heroes, but they are in a heavily-policed quint. So… why does it need heroes? It’s something I’d put out there and we would start working out what had created the necessity for heroes in a place like this.

Anyway, that out of the way, we went into the adventure!

The group were trying to get their tavern’s cart fixed after it had been used to carry a bunch of unconscious cultists. Snow entered the tavern, fixed the cart and introduced herself as an old friend of Bryan’s. His father saved her life a long time ago, something Bryan never mentioned as he did his best to hide any information about his old life.

Ethan called the guards in to take the body of the dead miner away and while they waited, the body got up. Urit, still groggy from seeing through the eyes of a mouse, managed to draw his partisan and slash the creature into pieces.

Snow heard about the plan of the group and decided to join them in stopping the crystal monsters from whatever their fiendish plan was. They travelled and triggered a move called “Undertake a Perilous Journey”. Normally this is done when people are travelling to or from a dungeon, anything like that. Given that Exodus is so large, the group had to take the move to get through the Guardians Quint to the closed down and quarantined Gemsmith’s Quint.

Bryan acted as the scout, Goodfight as the trailblazer and Holden as the quartermaster (of course).

The Guardians Quint was having a festival which crowded many of the streets. The Festival of Colours was a joyous and strange time each year, where many workplaces closed and even the most gruff guards were merry. Why? I don’t know. It was out of the group’s experience and I’d not planned most of the festivities, so I asked the group what they saw which was strange:

Josh – A group in green with a single white shoulderpad and naginatas.

Amy – Old women in an alleyway, throwing tomatoes at each other and cheering.

Jacob – A piazza with five people in black around a pentagon.

Ash – Peasants getting painted in different colours, using fruit or anything they could find to make themselves colourful.

Lee – The guards here are the opposite of the order, flamboyant wielders of double-bladed swords.

(I see no entry for Vinnie, I can only assume he said nothing or added to one of the above suggestions).

In amongst the parades was an animal trainer with a dire peacock who had slipped from its cage. Snow decided she would try and tame it. The peacock was mainly curious about Bryan, who it saw as food. Holden realised what the peacock was about to do and prepared to defend. The beast smashed its head repeatedly against Holden’s shield, making Morca break out into laughter rather than actually help out. Ethan psi-bladed the peacock and in returning the monster to its owner, they realised it had been abused.

The group bickered about what to do with the peacock as Snow, Morca and Goodfight wanted it freed. The guards arrived, making things worse. Ethan tried to reason with them and Bryan knocked Goodfight out with his poisons. The animal was caged again and sent on its’ way with its owner. 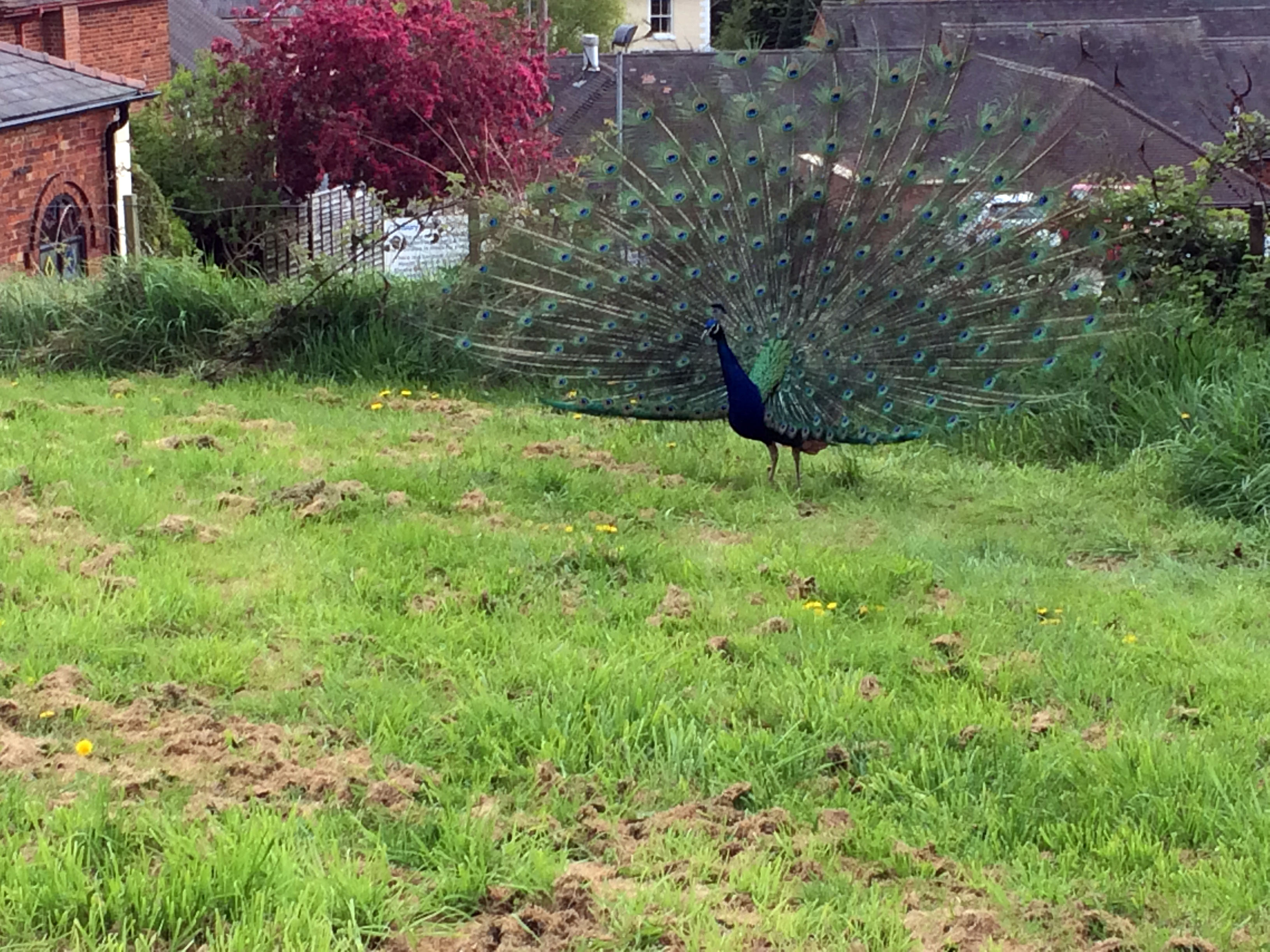 A quick sidebar: This is the peacock who tormented my friends and I during CabinCon II and III. It’s a gorgeous beast to look at, but its cries permeated the house in the middle of the night. A former GM of mine, Chris, was amazing at imitating it. Around the table during this and the next sessions there were several impressions, sadly none to his level, but they were fun to do.

The travellers stopped at a moderately fancy hotel for the night, arranging to split costs by sharing rooms. Snow decided to sleep on the rooftop as she wasn’t keen on the whole ‘indoors’ thing. The rooftops of the Guardians Quint were mainly flat, with the occasional decorative minaret stop them. Goodfight decided to head out into the festivities which were still going on. He caroused and met Gehana, a middle-aged dwarf woman who had an interest in tales of the Gemsmith’s Quint. There were rumours of ghosts, but also of a fountain which showered people in gemstones. Goodfight’s natural enthusiasm was too much and she decided to gather her entourage in order to head off.

In one of the bedrooms, Bryan summoned Death. It had started to stalk him and he decided it would be better to get things over with. The shadows in the already dark room grew even longer and a gaunt figure appeared. Death explained that Bryan had made someone else deliver the boy to him. This was not the deal. Bryan stammered and tried to defend his actions, that he simply asked someone to carry out Death’s request. “Deliver me Morca. You have one week,” Death responded. Then he was gone. Normally this is a dick move, forcing a player to kill another or die. I figured that Vinnie would either follow through, fail and die, or find a third option. There’s almost always a fun third option hidden away somewhere and if the rule of cool is invoked, it tends to override a lot of other things (see soon our 7th Sea campaign). 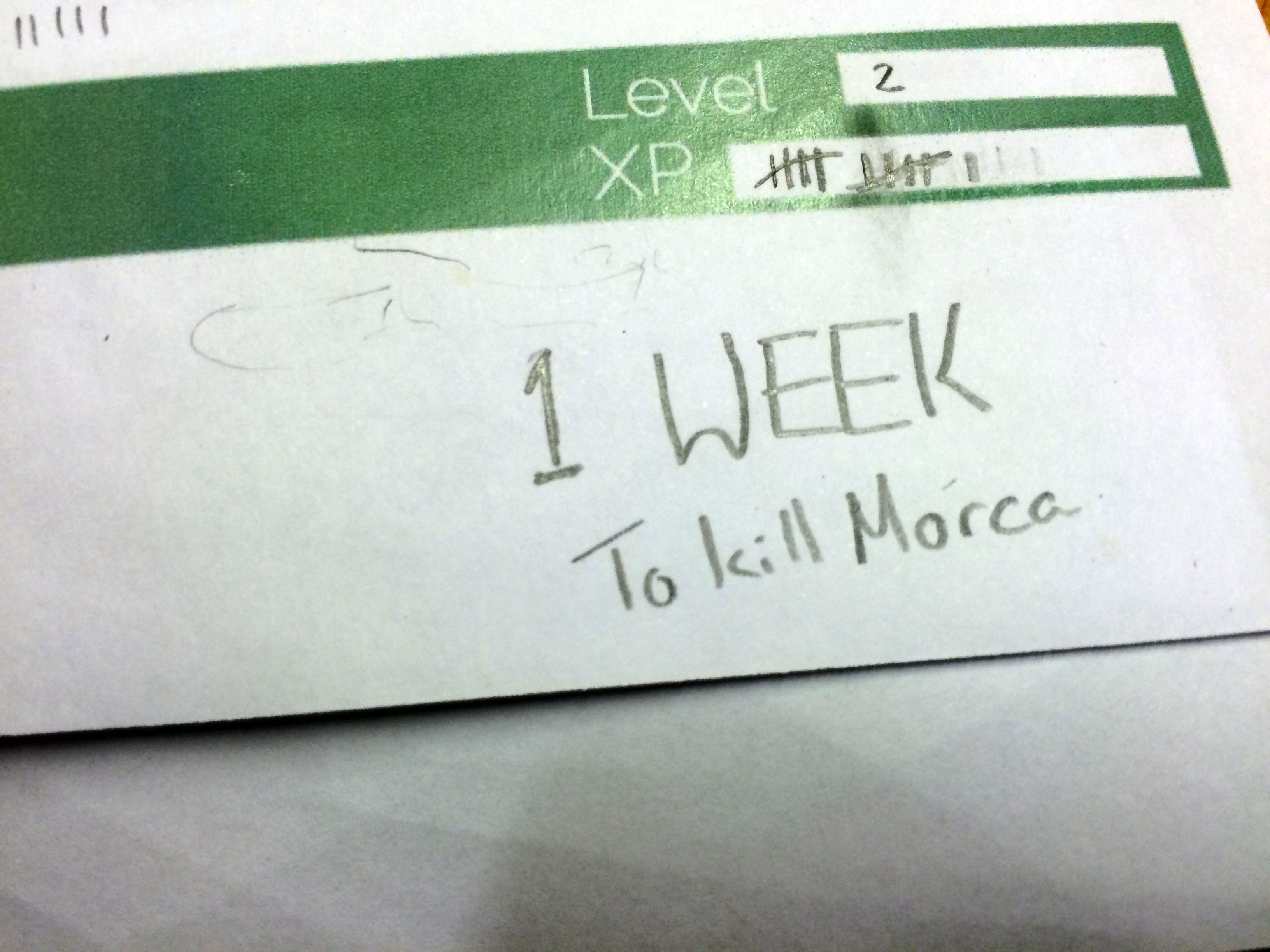 On the rooftop, Snow’s slumber was tricky enough with all of the noise in the streets below, but something had started to bother her. The minaret from one of the buildings wasn’t there. It was on another rooftop. Then it got up on a pair of giant, mosaic-tiled spider-legs and crawled from rooftop to rooftop. Ethan had been looking out of a window and saw this, too. The party, sans Goodfight, gathered on the rooftop as the minaret drew closer. It stopped between roofs, before landing on the party. The bottom opened and a band of roof pirates swung down on ropes. This is one of those times where I wish I still had my notes with me to show you how quickly and how little information I’d made about this group, given the kind of colourful band they were.

Darir! A blind mage who used a staff to fight!

Firouz! An old man dressed in a massive cloak of shadows!

Ric! A dual-sword-wielding pirate with a fancy jacket and even fancier hair!

Ethan challenged Badoura, trying to fight and ask about her origins as he’d never seen psychics outside of his order. Snow attacked one pirate and was dropped through a hole in the ground which Firouz had made out of shadows. She flipped back out almost instantly with her barbarian skills.

Morca threw his partisan which missed and got stuck in the building opposite the one the heroes were on.

Goodfight ran and telekinesised his way up to the others, then threw Morca’s partisan back at him. One of the pirates grabbed one of Snow’s squirrels, Meep. Ethan managed to drop Badoura who fell from the rope she was hanging off. Goodfight used Bryan to parry an attack and Ric pulled a gun on Ethan. It was whipped aside by Morca.

Goodflight flew up into the minaret, where a buff old guy and his Grima Wormtongue-looking minion were examining a control station. He blasted wind at the pair to shoot them through the window but was caught up in the gust and flew out with them. Morca saw the trio flying through the air and summoned giant eagles to help them. Morca’s power to summon the eagles didn’t allow any form of control and they flew away with Goodfight, the captain and his first mate.

Back on the rooftop, Holden had cancelled out the magic of Firouz, which left a naked old man. Badoura and Darir were knocked out and Morca used Ric’s gun to shoot him. Half of Ric’s face was blasted off and his corpse slumped to the ground. Firouz screamed in horror and then explained to the group a couple of things:

Ric wasn’t the captain of the rooftop pirates. This was his idea for a foolish heist to impress the captain who refused to rob people during festival time.

The captain was one of the people carried away by giant eagles. He was also Ric’s father. Uh oh.

Next session: The captain returns… as does the dire peacock!