by Charlie Etheridge-Nunn on September 22, 2015

There’s something interesting going on at Google Plus at the moment. I know what you’re thinking, “Google Plus still exists?” Yes, it exists and while it’s very much the redheaded stepchild of the social medias (especially in my social circles) it is actually an amazing venue for RPG-based discourse.

There are several different communities out there.

The Gauntlet is a Texan RPG podcast which has a vibrant community not only for their local group but it’s expanded to discuss indie RPG matters.

Apocalypse World, Fate, Dungeon World, Lady Blackbird, Dungeons & Dragons and several other games have their own communities. Just go to the Community section of G+ and type in an RPG you like. It’ll probably be there along with actual play reports, resources, hacks and general fan chatter.

+Paul Czege is the designer of My Life With Master (a game where I played a shapeshifting Niles Crane who was helping a villain build a literal skin orchestra) and the intriguing The Clay that Woke. He is an active part of G+ and started a game design contest called Threeforged.

There have been some interesting contests out there in the last few years, several of which inspired current published RPGs. Some involve ‘ingredients’ to play with like Game Chef.

Threeforged is a three-stage game design contest. Stage One was a 700-1,100 word RPG. It sounds tiny but another contest earlier this year was for 200 word RPGs and they seemed to manage. They are passed back to Czege who removed the names and passed them on to another contestant. That person needed to add 1,000-1,200 words to the concept and passed them back again. Then a third designer was tasked with adding another 2,000 words to the project. All three authors would have no idea who they were working with through the process.

The designs are done and 103 new RPGs have been made by a bunch of unknowing collaborators. You can see them all now at the Threeforged site. We still don’t know who made what or with whom, but you can read them and vote on any you like the look of. Voting ends on 27th September.

Like all the other RPGs, there’s a Threeforged community on G+ for reviews. Here are some I have written there. You can see the rest by visiting the community here.

I went into this at the end of a long day and after a few other reviews, so I just glazed over it at first. Something about skills and plot points. Someone could be a spaceship.

Then I went back to it as I’ve been trying to go through as many of these games as I can. Wait… you can be a spaceship? How very… Iain M Banks. Okay, you have my attention, Promethean.

This is a game where you play the denizens of a massive spaceship (or the ship, as said above). Each one has some set skills or a small amount of choice over which skill to take. The skills have a corresponding character flaw, then there’s the “special thing” you do, a description of what happens if the role is missing from the game and some character questions. The roles are fixed (but certainly hackable) including the ship, the Lord Captain, the Psilot and so on. They’re science fictiony but has a touch of the fantastical to it, almost like something you’d expect in The Metabarons.

Each character generates an amount of plot points and you can spend them on the plots which need resolving. This mechanic seemed a little daunting with its’ seven-point list of things for each plot. Reading it a couple of times it becomes clearer. Each player’s making these plots so it’s not for a GM to suddenly list out seven things for a bunch of plots per character on the fly. Phew. Instead there’s a menu of plot items to spend those points on. This way you could have several small plots which you have to deal with all of at once, or one big nasty plot.

Each player’s only taking one action a turn to resolve any of their plots and those unresolved fester. This is a game about putting out a ton of story fires and as formalised as the plot and action point system seems on paper, it also looks like it could be very interesting in practice.

The final interesting thing listed on here is your survival. Everyone has a list of seven points and the top item is true, “I will live forever.” However these get crossed out. The, “I will live…” statements end after the third and then you’re on a timer for how long you’ll live. “I will not die until the final session,” is the mid-point. “I am dead,” is the final one, when you’ve run out of all your chances. I like this mechanic and it reminds me of the Marks in Night Witches which draw you ever closer to death or a need to retire your character.

There are sample plots on the back page, which I’m really pleased with as I know a few of my group suffer analysis paralysis when provided with a completely open field to play in. Even if the samples aren’t used, they can be riffed off for new ideas.

Some make interesting reads by themselves, some would be interesting to run or play. Maybe vote on some of the projects if you like what you see.

This game touts itself as a Dead Space and Event Horizon style horror game. There are tears in reality which the players are investigating for various missions. Characters have a class and a personality trait. Both affect the way you resolve conflict but the latter also gives you a little power when you die so you can better haunt the other players.

The GM has a hand of cards which they set their challenges from with the total value determining difficulty and suits determining the type of problem. Players can pitch in a card each and can ignore a card if they’re skilled at that particular type of challenge. If their personality fits their approach to the challenge then they get a bonus, too. Failing causes stress in each party member who joined the challenge. If players are killed then they become ghosts who want to murder the living, keeping them in the game and making life so much harder for the survivors. There is a rudimentary inventory system which I’m not keen on as it doesn’t really do much in this form, maybe it would in a larger version or could be removed from the game entirely.

Whenever the deck needs shuffling the mission changes up, with the recommendation being that it start to involve dwindling time after a reshuffle starts.

This is a typo-laden document and doesn’t do a great amount with setting. The implied setting from the influences and the mechanics should push it through for a short one-shot, but I’d be interested in seeing it expand from what we’ve got here. 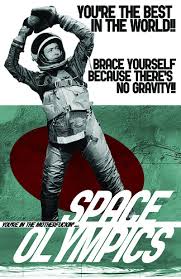 Mass Effect x Player of games x Cool Runnings? Cool Runnings? Okay. Rather than joining the United Federation of Planets stand-in because of diplomacy or anything, they’re the plucky underdog in a big space sports contest.

Players start with index cards, marking out humanity’s noteworthy traits (for this game… we’ve got a bunch in real life, I hear). Then players each make the competitors who are all better than humanity in one field and worse in another. These all modify the aliens’ culture, wisdom and athletics stats which are determined with a d6 roll (which I think might be fun if each player rolls and writes down privately to add a little surprise to the proceedings).

Next everyone makes up sports and shuffles them up in a big deck with random events, adds the opening & closing ceremonies.

This sounds competitive but no, we’re all on the same side and just creating the things we’re battling. The players make their own characters with skills, goals and no wealth or glory.

The events begin! There’s the opening ceremony, then athletic and non-athletic events with some fairly simple actions and dice rolls to explore what happens and whether humanity gets to join in the Galactic Council, ends up culturally respected or ends up the whipping boy of the galaxy.

This is an amazing game, a definite contender. The only issue I have is that there’s a GM. I feel a rotating GM spot might be a bit better as it would allow everyone to take part in the events and one person as a sole GM doesn’t have as much fun to do. I love collaborative world-building like the first section of the game presents here and really want to show this game to my group.