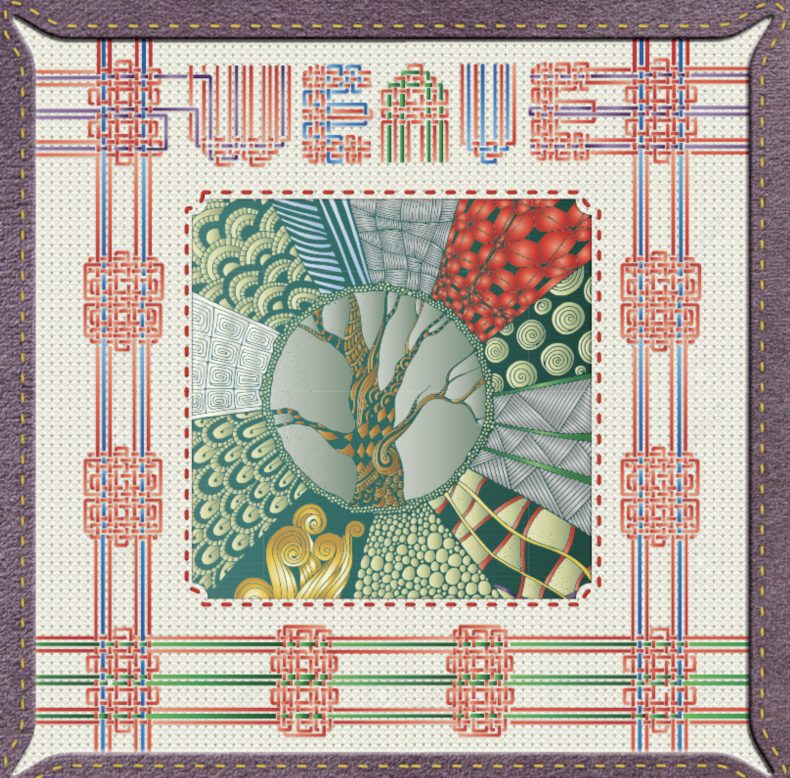 By Mina McJanda and Liz Iles

The wooden train station was battered by the endless storm. The apprentices of the Vellavna stood inside with what they were beginning to realise were too few supplies. Loden looked at his cotton suit, then back out to the rain and the darkness. He touched the glyph on his sleeve and his suit began to pick at the wooden bench, folding it into an umbrella. Delphi held her hipflask up to the lantern and began to magically absorb light into it. “We may as well get this over with,” she said and stepped outside. Across the other side of the tracks was a dirt path winding towards a thick forest. Somewhere, a wolf began to howl.

Weave is a tiny RPG, only 20 pages, almost half of which are illustrations. It’s a diceless game where you play the apprentices of the Vellavna, magicians who work magic through clothes. As part of a pilgrimage, you travel from settlement to settlement, seeing the local customs, getting into scrapes and eventually making a yarn mannequin embodying one particular piece of clothing from the community. 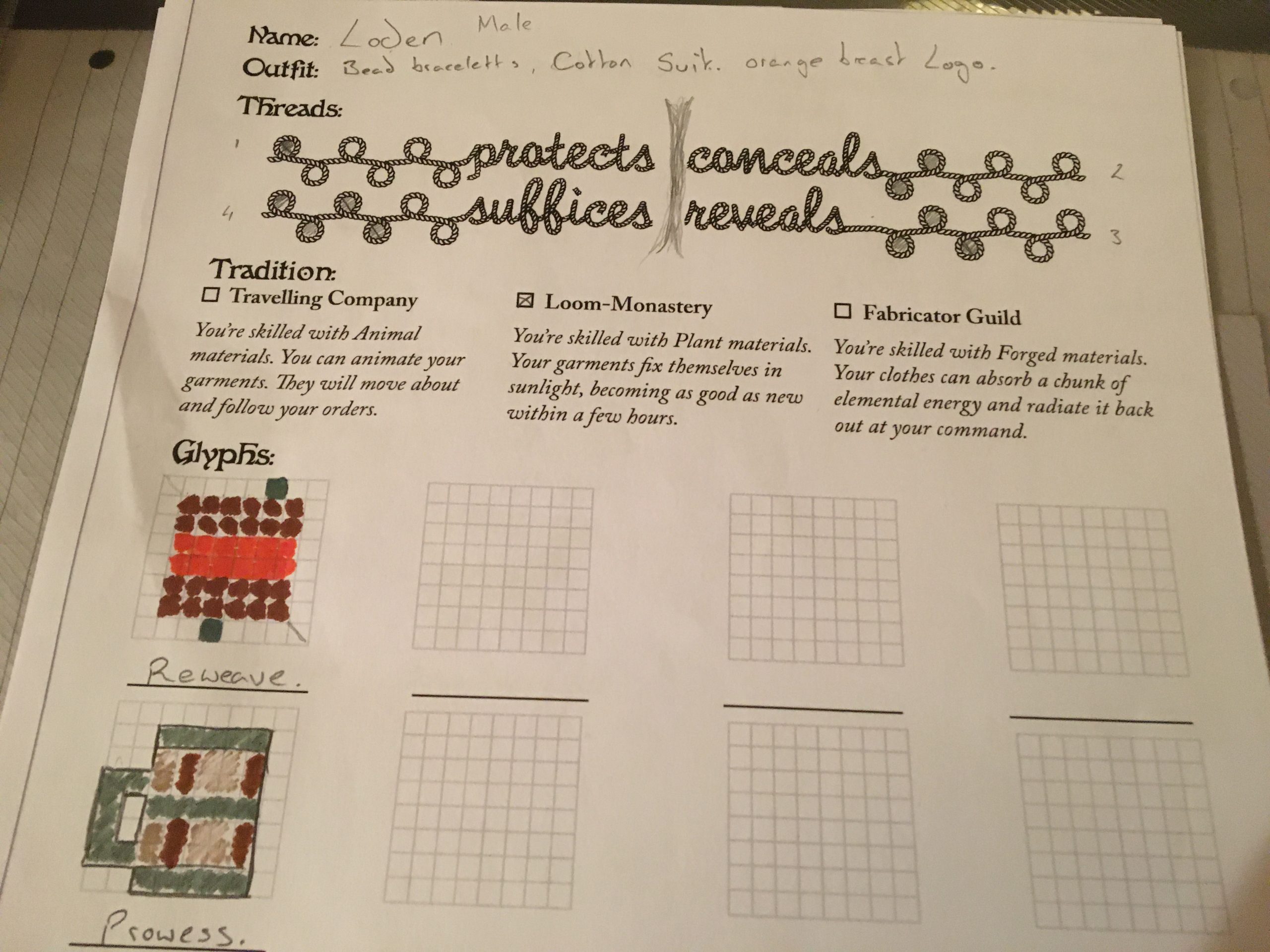 It’s a fantasy game, but one of small magic and chilled moments of exploration. The system is a simple one where if you’re doing something important which isn’t magic or tailoring, you’re going to have a failure or a success at a cost. If it is tailoring and you’ve got time, materials & tools then you’re successful. Magic is a little different. Each character comes from a community which informs the materials they’re most familiar with (e.g. a loom monastery for natural fabrics) and a spell. You also get points in Threads which either Protect, Reveal, Suffice or Conceal, allowing limited amounts of special effects each session. Finally you have glyphs, which is where the game recommends you bring along some pens for colouring in. Here are some which my group made: 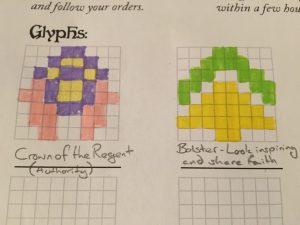 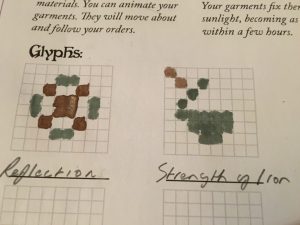 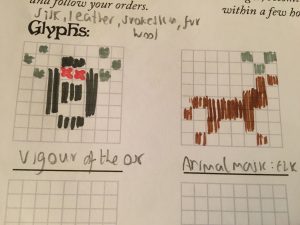 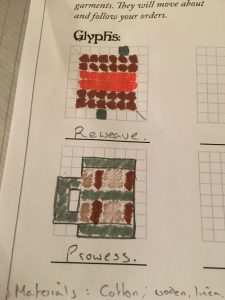 The glyphs allow you some magic without it being your community’s style of magic or a spent Thread. It’s more specific, such as Crown of the Regent, which allowed Delphi to appear like a person in position of authority. This allowed her to claim to be from the FBI, although the meaning of the acronym in our fantasy world so we came up with several suggestions, (Fluffy Baby Inspector, Furry Beast Investigator and so on). The only illustrations in the book are sample glyphs for people to use as inspiration which are on almost every other page.

That’s pretty much all the character side. The game being the game, the personal information side recommends describing the clothes of the characters but not any other physical appearances as those don’t really matter much to the Vellavna. For the most part, I did the same with NPCs, only describing the body of a blacksmith who pretty much wore his callouses and scars as his outfit.

The GM has a bit more information. It has lists to pick from or randomly roll if you’ve got dice around. This way you can make the community the Vellavna are heading to, the item of clothing they need to study and its’ meaning. It gives a little bit of drama which the community is facing and they can deal with if they want, although they don’t have to.

The yarn mannequin or ‘Egregore’ the group build at the end of four days has certain requirements, being Warp and Weft. These represent the details and the culture around the item and have scores the group need to hit set by a list of requirements relating to the item. The group run through four days in the community and the GM privately marks whether they hit requirements to gain points in Warp and Weft. If they dare make an Egregore on the morning of the fifth day, the GM compares the players’ scores to the items and either it’s brought to life and teaches the apprentices a new glyph, or it goes awry, turning into a monster or an echo (a kind of ghost). Whether the drama’s been resolved or not, once the characters have gone through their four days, they set out to the next community on their list.

My group played a two session game of Weave, deciding to set it in a kind of alternate 1920’s Europe, inspired by Studio Ghibli and the art we’ve been seeing for Erika Chappell’s upcoming Flying Circus RPG. There’s some technology like trains, but also isolated communities and a little bit of magic out there.

Lee played Chintz, a utilitarian factory worker who saw this all as a distraction from his work. He carried a briefcase packed with tools, spare clothes and even some food. He dressed in a factory uniform decorated with small metal armour plates which he sometimes animated.

Vinnie played Delphi, cousin to Chintz and a drunk hot mess who had only packed a hipflask for the journey. She wore a deco style vinyl pencil dress.

Mark played Batik, from a travelling company. While his work was pretty practical, his outfit was a red cheongsam in red with ox patterns on it.

Wade played Loden, surprisingly stylish despite coming from a loom monastery. He wore a cotton suit dyed black, until the rain ruined it.

The group arrived at the station nearest to Muskfall after having heard the stories from people on the train, mainly about how no one travelled there. They wandered through the rain and were escorted for the last stretch by Vikram and Priya, guards who warned of a many-headed wolf in the woods. Delphi arranged for free lodging by saying the group were with the FBI. The rest of the group met the mayor, Mohun Mehrotra, who was the ‘Elksman’. They noticed his boots, which were the item they needed to study.

The problem with understanding the Elksman’s Boots was that he was a lazy, drunk coward. Loden tried taking the boots off the passed out mayor and was stopped. He went out to stay with the guards for the night, who spoke about how their seasonal hunting of the elk population was prevented by a giant wolf with somewhere between three and five heads. This meant the tanner and the villagers were pretty tense, trapped in the village and with an Elksman who wouldn’t lead everyone into the hunt.

The first day had Chintz making some money at the blacksmith’s, Batik learning about the construction of the boots from the tanner, while Delphi and Loden went out with Vikram to see where the last sightings of the beast were.

The next days had the group going somewhere between helping and tormenting the mayor. An attempt to get him to carry out an inspection of the guard fell awry when they were all busy watching Chintz animating his metal scales to tell stories. The group discovered that the mayor’s mother was a druid faking the existence of a legendary wolf to try and spur her son into a moment of heroism. By the end of the third day, the mayor was persuaded to hunt, so they could see him putting the Elksman’s Boots to use. They drank, they celebrated and had a chilled out final day in the village. On the final morning, the group each described what they were adding to the Egregore to represent their time there. It woke, danced through the village and taught them their second glyphs.

Once the moment was over, they had to pack up and move on.

I really enjoyed Weave. We’d just finished a campaign of the brutal zombie apocalypse-plus-capitalism game, Red Markets, so running a nice, small game was a perfect palate cleanser. I really wanted to see what the group did in the next communities and we may have to return to the world at some point in the future. It was tricky not just focusing on the local drama, as the group (including myself) were too conditioned to see a problem and have to solve it. Some of the group had issues with how to use the magic and while I was loose with the restrictions (casting through your own garments rather than transferring it to others), they still found it a little tricky. There are some minor ambiguities to the rules, which is to be expected in a game this small, and may not matter to you at all.

The game cites the video game Journey as one of its main influences. I’d say that if you like Avatar The Last Airbender and the board game Tokaido, then you’re likely to have a good time with this RPG.

It can be bought from Jay’s site, here.