Patch stuck kept digging through the collapsed tunnel into the allotments. He’d darted past the dog and far ahead of his friends, so now he was going impress them all by entering the allotments and rescuing Thorn. He shook the earth and twitched his nose, sniffing for any trace of Thorn. In the distance a human was merrily working in a large transparent structure, humming over plants. Rows of tomatoes grew fat and tempting. Patch found the scent of Thorn, hidden beneath a small human structure take over by weeds. He hopped closer until he saw Thorn’s panic.

“It’s the monster. It’s—” Thorn was cut short, freezing in horror at the squealing noise of a tiny human. 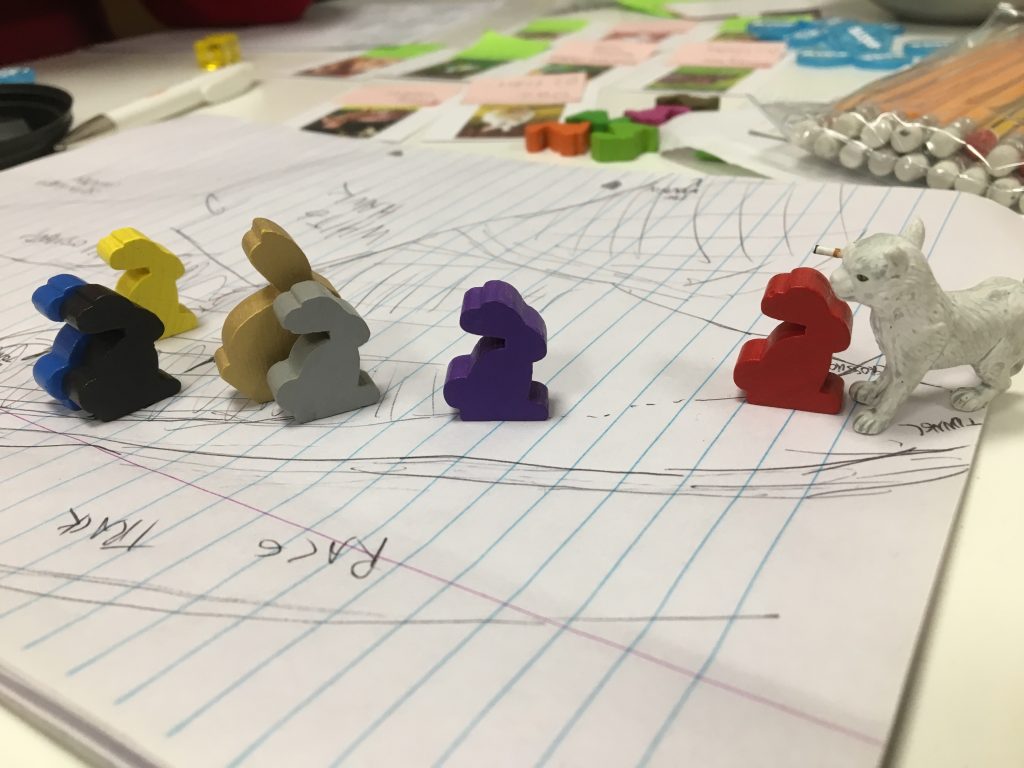 The Warren is an RPG about the lives of rabbits. Not anthropomorphic rabbits or magical rabbits, you are just plain rabbits. You live in a warren and as well as playing your rabbit, you’re trying to keep your warren alive. That means keeping their territory safe, mating with other rabbits and trying not to die as life is pretty harsh. If you’re thinking Watership Down, you’re not wrong.

The game uses the Powered by the Apocalypse design philosophy, but cut back to a minimal level to allow easy character creation if you lose your rabbit. You have basic moves and one special move, either picked from a list or taken from a deck of special move cards if you pay a little more. You don’t have character classes, although there are a few different playbooks with slightly different rabbit example names and silhouettes for people to draw their rabbit onto. That’s not necessary, but is a really nice touch.

As in most PbtA games, the moves are a good indicator of what your character will do and they are as follows:

There are secondary moves for digging, mating and innovating new moves. When the rabbits in my campaign were hiding in an old, abandoned warren, they invented a move called ‘Barricade’. When they wanted to taint the offerings they had to present to seagulls, they made a ‘Poison’ move. If they’re successful at the innovation, then it’s something rabbits can do in our story. If they fail, they definitely can’t do it.

You get a special move, which only you have in the whole warren. They could be that you’re really fast, you’re bad with one sense and great with another, or that you’re marked for death and will get a bonus special move when this rabbit dies.

I mentioned “Resist Panic”, but I didn’t say what Panic does. If you build up Panic, then you’re going to find it tougher to do things until you calm down. Mainly you’ll be wanting to take less risks and provoke less Resist Panic rolls. Otherwise the GM will pick whether you fight (remember, there are no moves for fighting in this game), flight or fright. If you end up getting hurt through panicking or any other problems, you may end up getting hurt. Compared to other PbtA games, you don’t have wounds. You instead remove a basic or special move. When you’ve accrued a lot, you might want to retire the rabbit in some way.

The Warren follows the simple, clear design of Bully Pulpits games and the thinner PbtA volumes. Nothing feels wasted and there’s no bloat. There are quotes and reminders about the naturalistic world you’re going to experience and how to embody it. The game also presents changes for running a version of the game for kids, softening the harsher and more mature tones the game can go into.

I backed The Warren on Kickstarter and got a deck of cards with the book. They’re not needed, but can be really helpful. The most useful part set are the special move cards, as you can hand them out to players and see what the warren has left if characters advance or need replacing after a death. There are NPC cards which provide great prompts for rabbits, animals and humans, alike.

I use faceclaim cards for a lot of my human-based RPGs, being photos stuck onto small cards for people to use as PCs and NPCs. I decided to make a set for this, featuring bunnies and other animals. 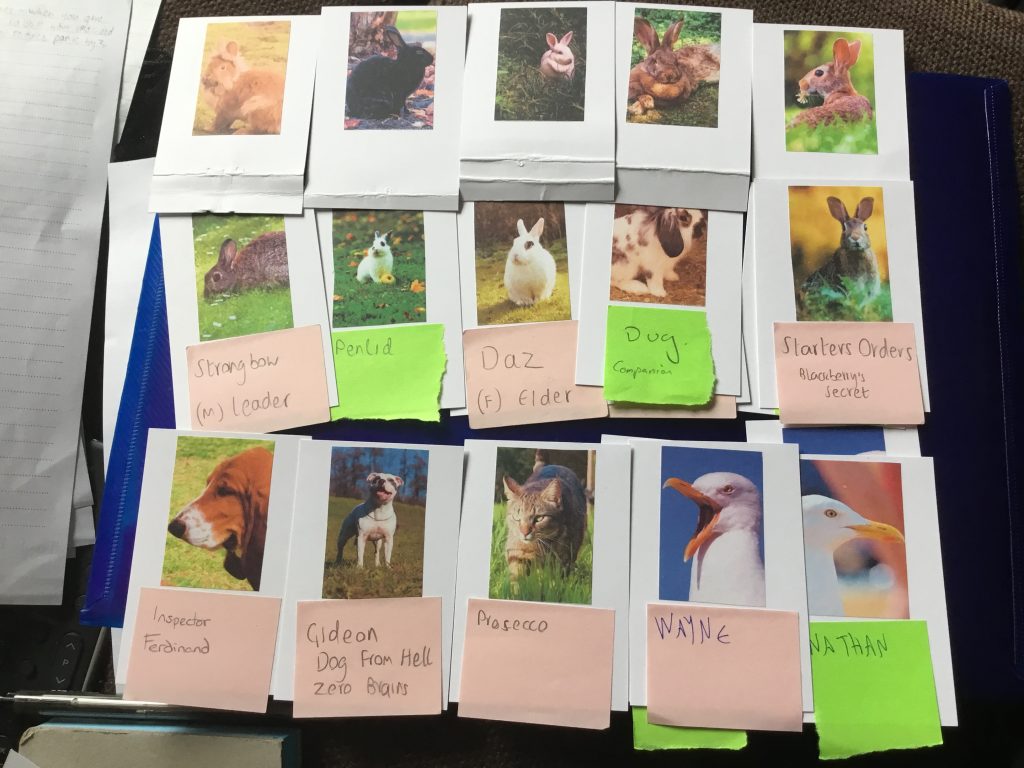 I ran a season of The Warren set on Whitehawk Hill in Brighton. It’s a place I used to walk my dog fairly regularly and back then I figured it’d be an interesting setting for the game. It’s a semi-wild set of chalk grassland on the hills above Whitehawk, looking down on the city from both sides. All manner of animals reside there, including a recent invasion from reptiles who were dumped on the hill from a doomed wildlife site in nearby Portslade. I turned my findings into a playset with its own set of questions, names and threats. It even had a custom move when a rabbit tries to traverse the deep, strange, graffiti-covered tunnel going out from the hill.

Our campaign started with some world-building, which some of you might be able to translate from my notes. 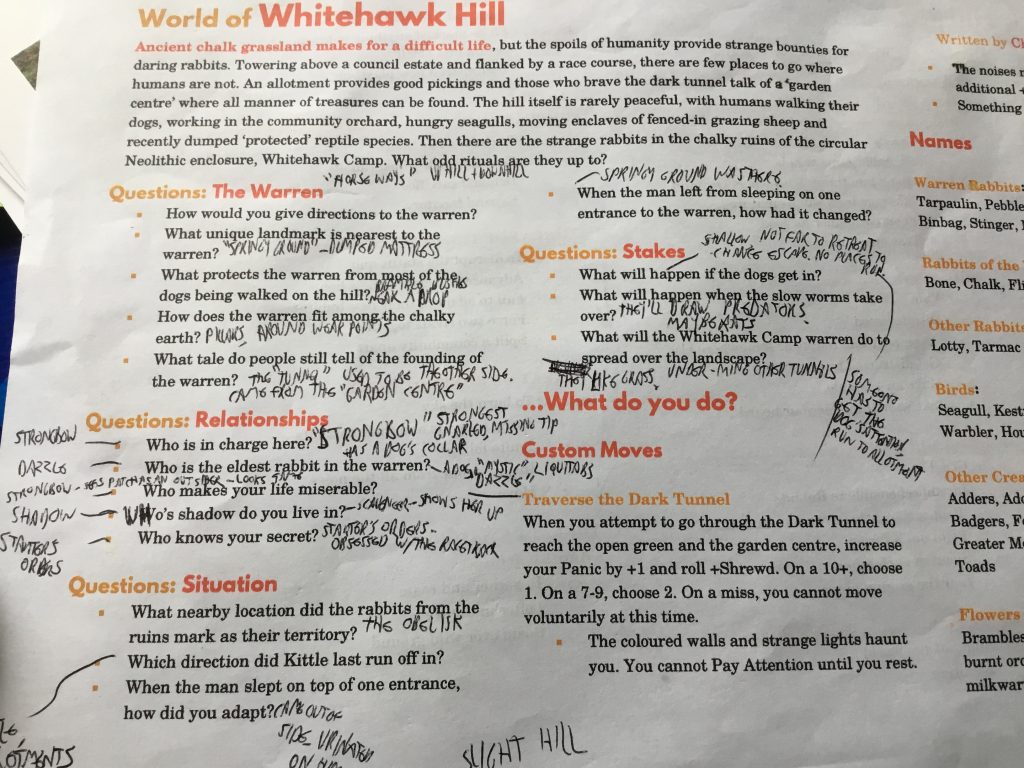 The game began with a simple mission to rescue Thorn from where he’d been scouting near some allotments. The setting had so many perfect places for little vignettes like this. The group hadn’t been in the allotments before, but were the folks that Strongbow, the warren’s leader, trusted to find Thorn. They had to get past a very aggressive puppy and then a clumsily affectionate toddler, in order to fetch Thorn and bring him back. The group’s experience was tense in places but hadn’t gone full on Watership Down. We’d managed to set up the tone and the world. In the next session, I introduced the horror of “The Reptile Invasion”. Ultimately the creatures were lost, confused and out of their habitat, most likely doomed to die. They fled the most frightening foe I’ve created in an RPG, a sinister housecat called Prosecco. They traversed a fenced off section of the hill occupied by grazing sheep in order to broker peace with nearby cult of rabbits. There were foxes playing evil games, the hypnotic lure of the strange tunnel and occasionally even humans getting in the way.

We lost one character who couldn’t escape from a human in a car in time and was driven away, probably to a vet’s and a life where they would live safely outside of the story. The lives of the rabbit protagonists felt full, interesting and involved with the supporting cast which we all built. They doted on some rabbits, enlisted the help of others and almost all of them schemed against Strongbow.

I didn’t know what to expect from The Warren, but I found it made a very compelling campaign. Working out the perspective of things from a rabbit’s level was an interesting challenge and having somewhere nearby which worked as a setting was perfect. There are other setting playbooks which are good; I’ve only been a player for one of them so far, but they all provide tools you can use in those worlds or your own.

There are a few different animal-themed RPGs, but this is the first that really caught my eye. I went from just interested in the game to really loving it within a session and completely invested in the group’s warren. I even explored Whitehawk Hill to take a bunch of photos at roughly rabbit height just to add more resources for them.

You can buy The Warren on PDF here.